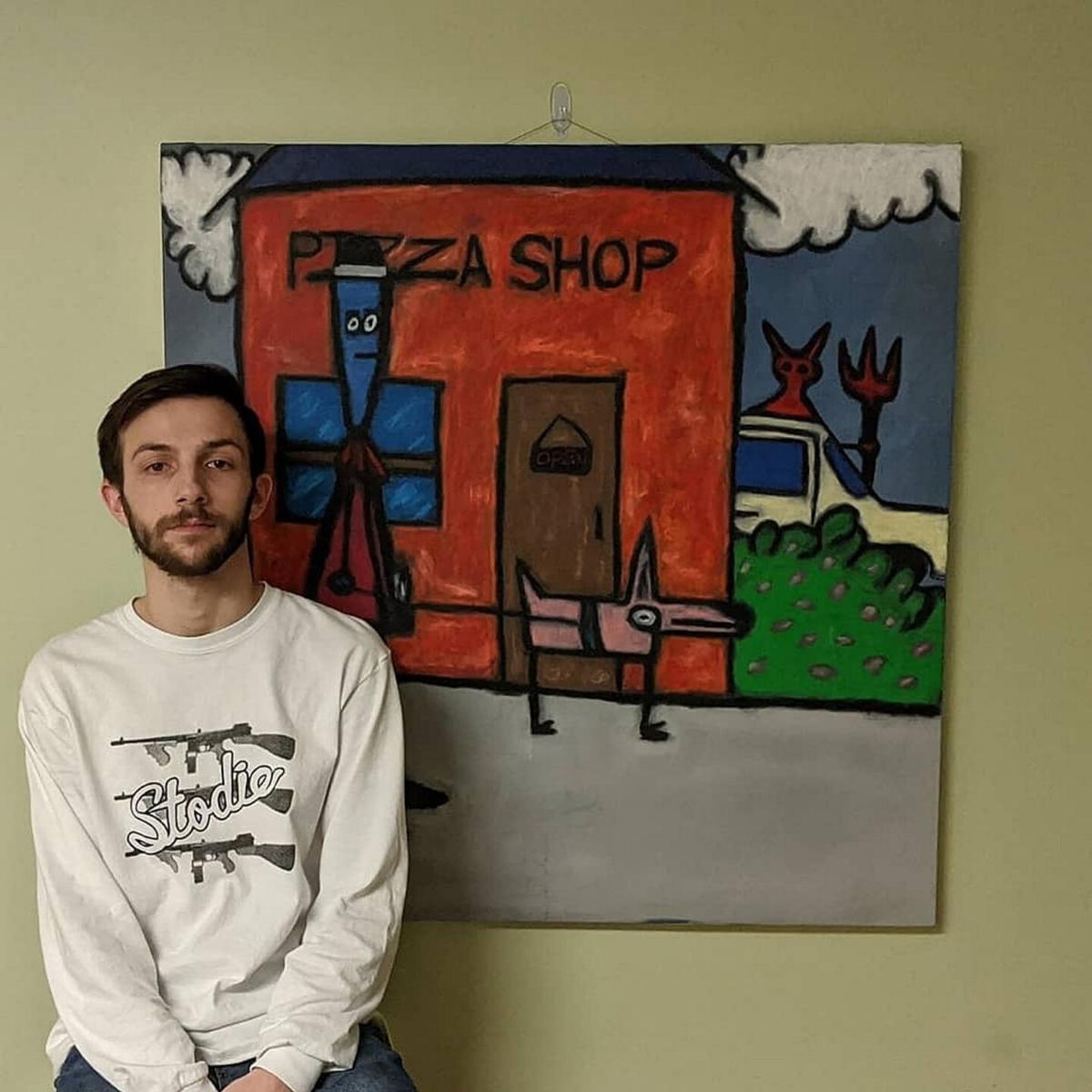 Upcoming exhibit. Dansville resident Colin Toomey stands in front of one of his paintings. Seventeen of his works will be displayed through Sept. 26 at Dansville Artworks, 153 Main St., Dansville. 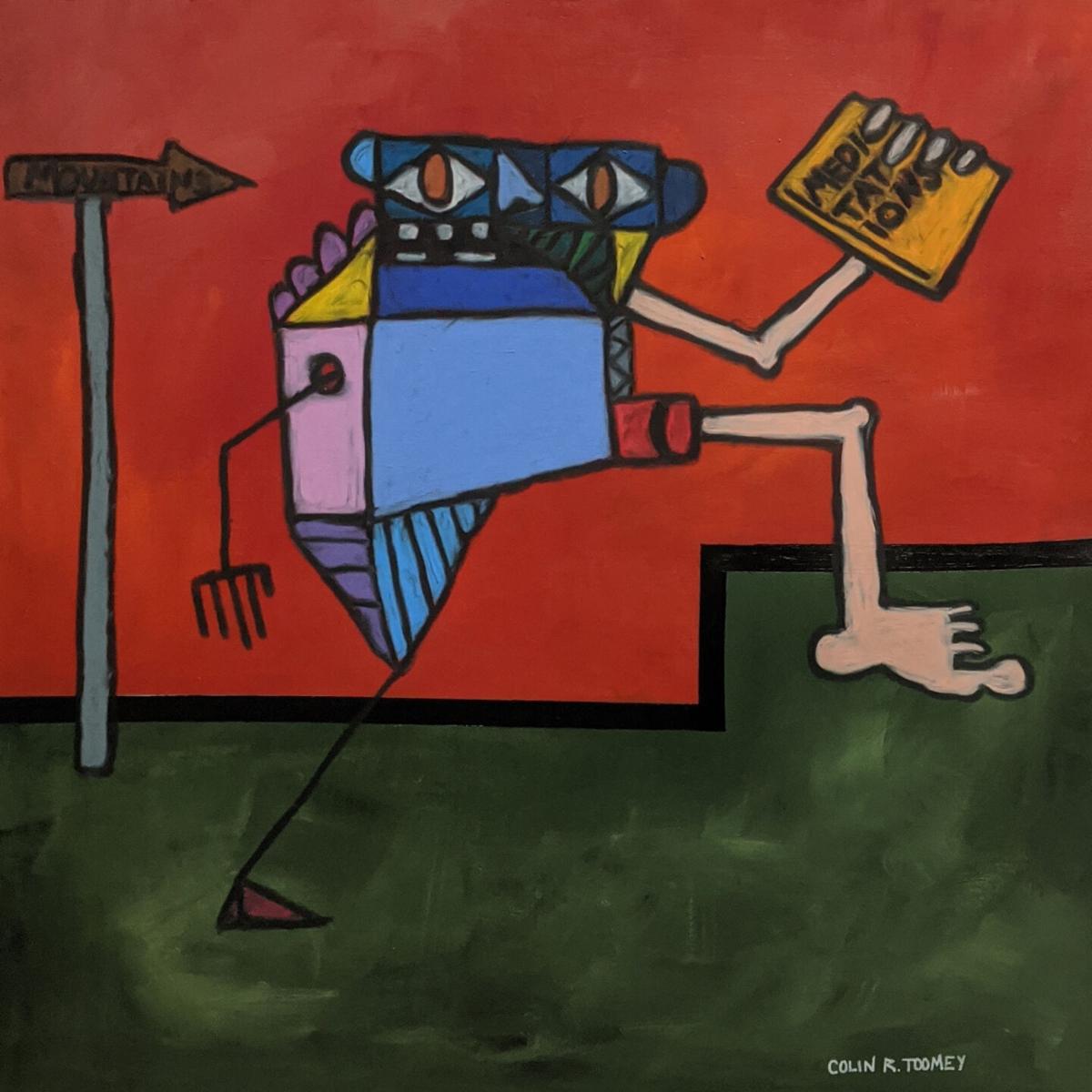 Colin Toomey "The Show has Begun," a 60-by-60-inch oil stick on canvas by Colin Toomey of Dansville.

Upcoming exhibit. Dansville resident Colin Toomey stands in front of one of his paintings. Seventeen of his works will be displayed through Sept. 26 at Dansville Artworks, 153 Main St., Dansville.

Colin Toomey "The Show has Begun," a 60-by-60-inch oil stick on canvas by Colin Toomey of Dansville.

DANSVILLE – Colin Toomey says he never planned on being an artist.

“I have not taken an art class since middle school,” said Toomey, a Dansville resident. “In high school I was always doodling in a notebook.”

But over time, Toomey’s doodles went from the corners of notebook paper to large scale canvases.

“Around here we do not get a lot of people that are doing large scale works,” Toomey said. “I have a lot of five by five feet pieces and I think they have a unique style to them.”

People across Dansville and beyond will have a chance to see Toomey’s art work this month as his 17-piece collection will be on display at Dansville ArtWorks, 153 Main St., in Dansville. Toomey’s exhibit, “Believe in Boxes,” runs from Sept. 9 to 26.

Toomey’s pieces have been described as vibrant, striking, thought-provoking and large. For most, he utilizes oil sticks.

What also makes Toomey’s works different he said are the unique images he paints.

“Most of my work is just geometrical shapes,” he said. “I don’t think it is intentional, it just kind of naturally happens.”

Sometimes, Toomey will start a piece by doing smaller scale sketches. Other times, he’ll tackle his piece head on, taking his thoughts right from his mind to the canvas.

“I try like experiment and make decision in the moment, while others times I have an image in my head and I don’t even sketch it out, I will just go right to the canvas and start painting,” he said.

An opening reception is scheduled for Sept. 12 from 3 to 6 p.m. Toomey said he’s excited to meet people at the reception.

Salome Farraro, a member of the Dansville ArtWorks board of directors, said the non-profit is also excited to reopen its doors since closing in March due to the coronavirus pandemic. During the closure, the board made the decision to refocus its programming through partnerships with area businesses and organizations and downsize its physical operations to the solo exhibit space.

Upcoming exhibitions will include Dick Thomas in October and November. A holiday gift shop featuring original artwork will occupy the gallery in December, offering the community a local shopping experience, Farraro said.

For Toomey, his collection is not just paintings but artwork that he says also tells a story.

“One of my works is called ‘Delivery Driver’ because I was working at a pizza place in Dansville and from working there it helped to inspire several paintings that I did,” he said.

Other pieces, said Toomey, helped him release emotions from traumatic events that he went through.

“I had just got my jaw broken. I got into a fight and that is how I broke my jaw but following surgery I made a painting and it was just very therapeutic just to get those emotions and anger out,” he said.

Toomey has only been painting for about a year, but during that time he participated in ArtWorks’ 2019 Winter Exhibit and said he’s learned so much about the art world. He said he encourages others along the way to also follow their passions.

“I would say go for it to be honest,” he said. “I always encourage my friends to create, even if you are not doing it with the intent to sell something.”

WHAT: “Believe in Boxes,” an exhibition of artwork by Colin Toomey of Dansville.

WHERE: Dansville ArtWorks, 153 Main St., Dansville. The solo gallery can be accessed through The Vault, a pop-up shop opened at 153 Main St., or from the rear parking lot entrance to 153 Main St., with an exit into The Vault’s shop.

WHEN: Through Sept. 26. Regular gallery hours are noon to 6 p.m. Wednesdays through Fridays and 9 a.m. to 2 p.m. Saturdays.

NOTES: Masks are required and social distancing will be followed in the gallery. During the reception, visitor flow through the exhibit will begin in the rear foyer of 153 Main St. and exit into The Vault’s shop. Rather than refreshments, gift bags will be offered to all guests.