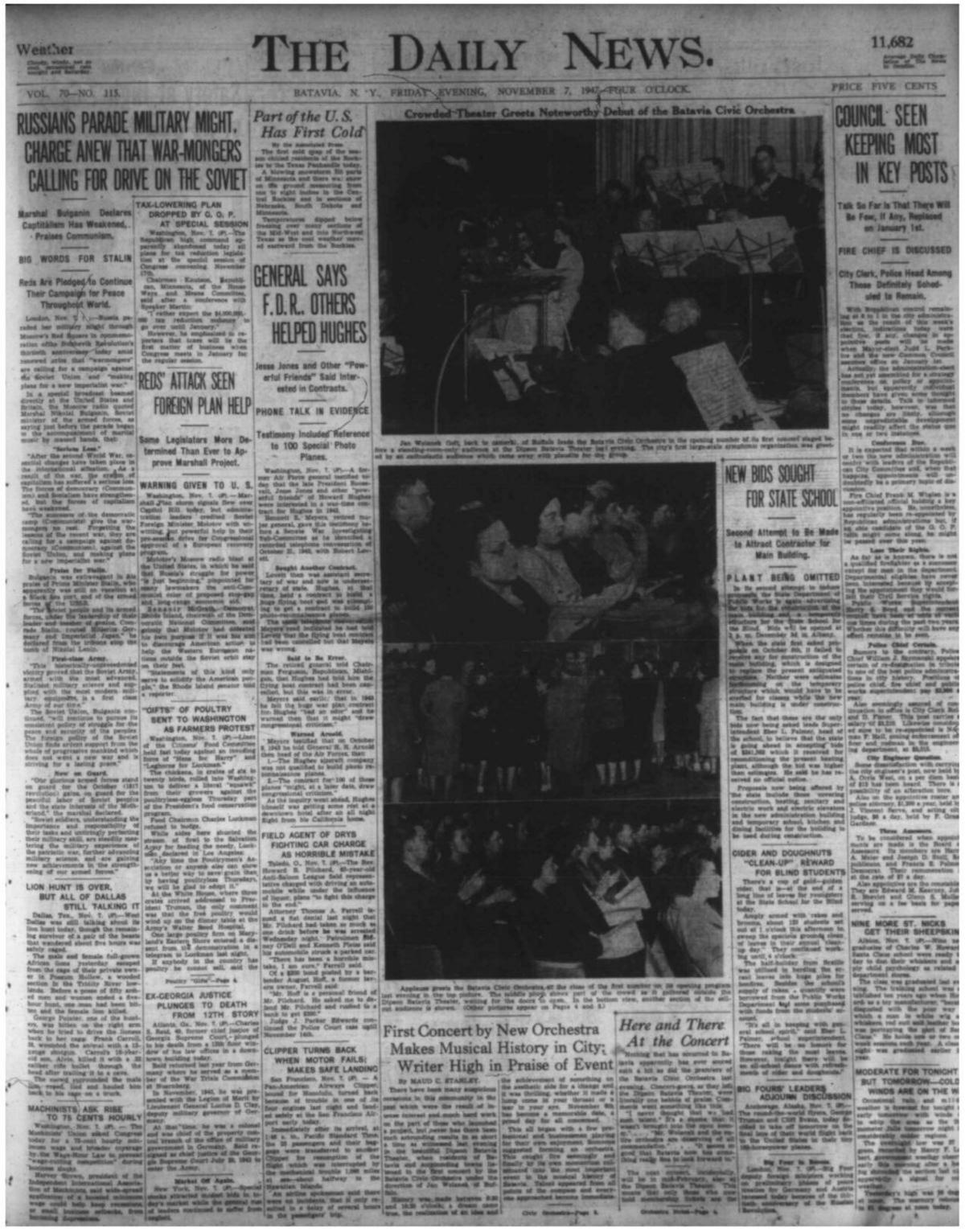 The front page of The Daily News on Nov. 7, 1947, which included a review of the Batavia Civic Orchestra's first concert. The orchestra continues today as the Genesee Symphony Orchestra. 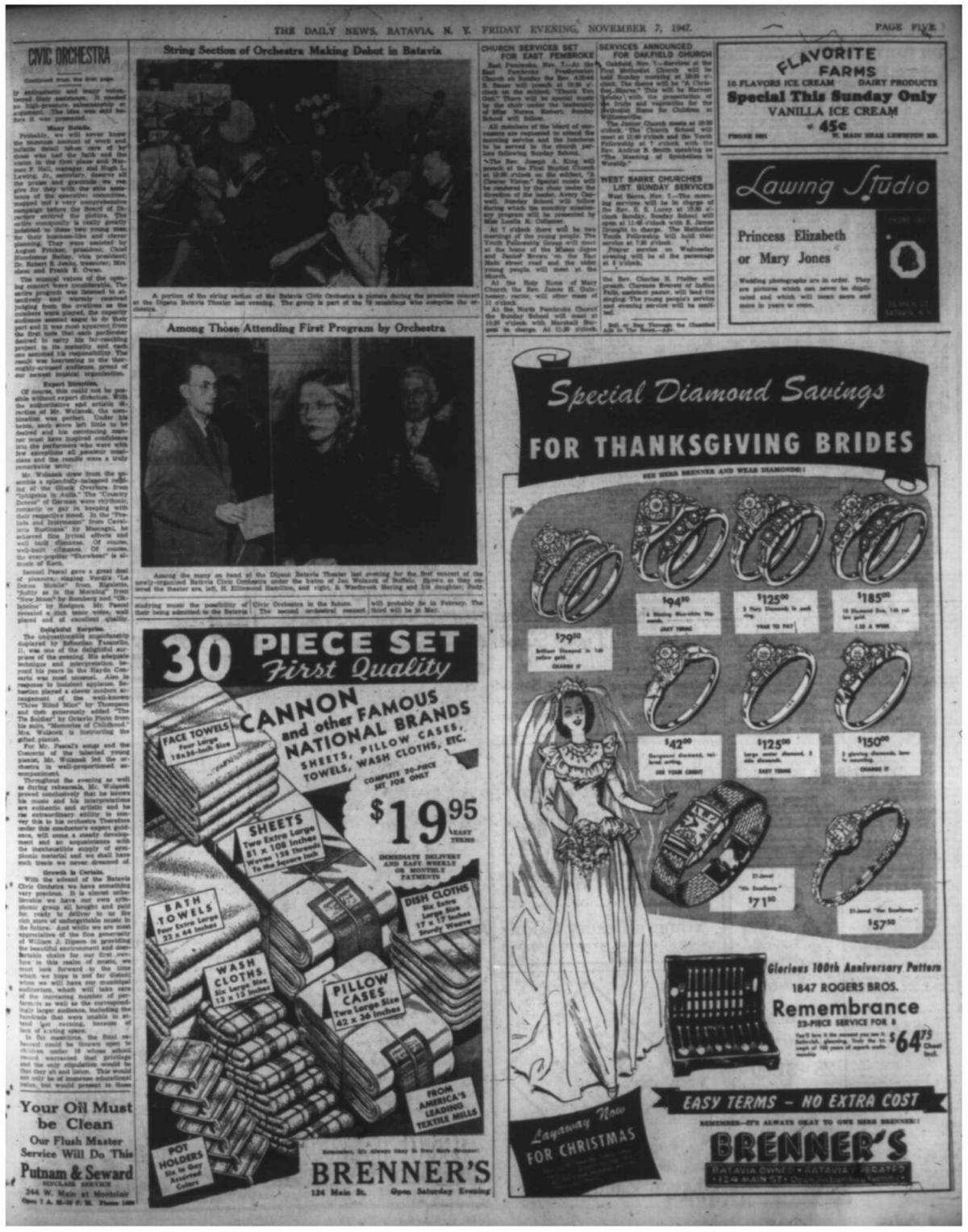 Page five of The Daily News from Nov. 7, 1947, which continues the review of the Batavia Civic Orchestra's first concert. The orchestra continues today as the Genesee Symphony Orchestra.

Daily News File Photograph Crowds line up outside the former Dipson Theater on Batavia’s Main Street on Nov. 6, 1947, as they wait the first concert by the Batavia Civic Orchestra. The orchestra, now called the Genesee Symphony Orchestra, will mark its 75th anniversary with a concert on Nov. 6, 2021.

The Genesee Symphony Orchestra – then called the Batavia Civic Orchestra – played its first concert on Nov. 6, 1947. This afternoon the GSO mark the occasion with a special concert at Genesee Community College. Published below is the review of that first concert, written by Maud C. Stanley and published on Nov. 7, 1947 in The Daily News.

There have been many auspicious occasions in this community in the past which were the result of intense interest and much hard work on the part of those who launch the project, but never has there been such astounding results in so short a time as witnessed last evening at the beautiful Dipson Batavia Theater, when residents of Batavia and surrounding towns listened to the first concert by the Batavia Civic Orchestra under the direction of Jan Wolanek of Buffalo.

History was made between 8:30 and 10:30 o’clock; a dream came true, the realization of an idea and the achievement of something on the aesthetic side for a change and it was thrilling, whether it made a lump come in your throat or a tear in your eye. November 6th has become a memorable date, a proud day for all concerned.

This all began with a few professional and businessmen playing for their own enjoyment. Someone suggested forming an orchestra. This caught fire seemingly and finally by its own momentum culminated into the most important event in the musical history of Batavia. Talent appeared from all points of the compass and everyone approached became immediately enthusiastic and many volunteered their attendance. It needed no high-pressure salesmanship or argument. The idea was sold before it was presented.

Probably, we will never know the immense amount of work and infinite detail taken care of by those who had the faith and the vision in the first place and, Norman F. Hall, manager, and Hugh L. Lawing Jr., secretary, deserve all the praise and gratitude we can give for they with the able assistance of the executive committee, mapped out a very comprehensive campaign before the Board of Directors entered the picture. The entire community is really greatly indebted to these two young men for their business-like and clever planning. They were assisted by August Fricker, president; Chief Nicodemus Bailey, vice president; Dr. Robert S. Jenks, treasurer; Mrs. Olson and Frank E. Owen.

The musical values of the opening concert were considerable. The entire program was listened to attentively and warmly received judging from the ovations as the numbers were played, the capacity audience seemed eager to do their part and it was most apparent from the first note that each performer desired to carry his far-reaching project to its maturity and each one assumed his responsibility. The result was heartening to the thoroughly-aroused audience, proud of our newest musical organization.

Of course, this would not be possible without expert direction. With the authoritative and artistic direction of Mr. Wolanek, the combination was perfect. Under the baton, each score left little to be desired and his convincing manner must have inspired confidence into the performers who were with few exceptions all amateur musicians and the results were a truly remarkable unity.

Mr. Wolanek drew from the ensemble a splendidly-balanced reading of the Gluck Overture from “Iphigenia in Aulis.” The “Country Dances” of German were rhythmic, romantic or gay in keeping with their respective mood. In the “Prelude and intermezzo” from “Valalleria Rusticana” by Mascagni, he achieved fine lyrical effects and well built climaxes. Of course, the ever-popular “Showboat” is all music of Kern.

Samuel Pascal gave a great deal of pleasure, singing Verdi’s “La Donna Mobile” from Rigoletto, “Softly as in the Morning” from “New Moon” by Romberg and “Oklahoma” by Rodgers. Mr. Pascal revealed a rich tenor voice, well placed and of excellent quality.

The unquestionable musicianship displayed by Sebastian Fasanello, 11, was one of the delightful surprises of the evening. His adequate technique and interpretation beyond his years in the Hayden Concerto was most unusual. Also in response to insistent applause, Sebastian played a clever modern arrangement of the well-known “Three Blind Mice” by thompson and then generously added “The Tin Soldier” by Octavio Pinto from his suite, “Memories of Childhood.” Mrs. Wolanek is instructing the gifted pianist.

For Mr. Pascal’s songs and the Concerto of the talented young pianist, Mr. Wolanek led the orchestra in well-proportioned accompaniment.

Throughout the evening as well as during rehearsals, Mr. Wolanek proved conclusively that he knows his music and his interpretations are authentic and artistic and he has extraordinary ability to convey this to his orchestra. Therefore, under this conductor’s expert guidance, will come a steady development and an acquaintance with the inexhaustible supply of symphonic material and we shall have such treats we never dreamed of.

With the advent of the Batavia Civic Orchestra we have something very precious. It is almost unbelievable we have our own symphonic group all bought and paid for, ready to deliver to us the rich store of unforgettable music in the future. And while we are most appreciative of the fine generosity of William J. Dipson in providing the beautiful environment and comfortable chairs for our first venture in this realm of music, we must look forward to the time which we hope is not far distance when we will have our municipal auditorium, which will take care of the increasing number of performers as well as the correspondingly larger audience, including the hundreds that were unable to attend last evening, because of lack of seating space.

In the meantime, the final rehearsal could be thrown open to children under 16 whose school record warranted that privilege and the only stipulation would be that they sit and listen. This would not only be of immense educational values, but would present to those studying music the possibility of their being admitted to the Batavia Civic Orchestra in the future.

The second orchestral concert will probably be in February. The third will be in May.

From the Archives (Nov. 7, ... by Watertown Daily Times