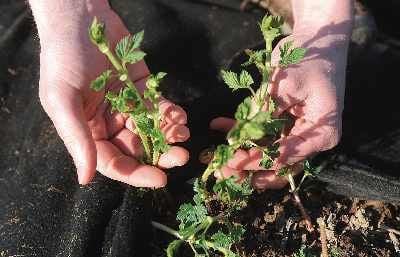 The hops plants at the Hojnacki Hops Farm will probably reach about 10 feet tall. The state’s growing beer industry is creating a new demand for the once-popular state crop. (Mark Gutman/Daily News) 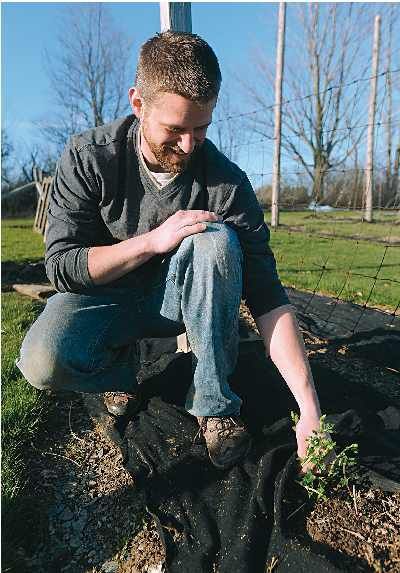 Dan Hojnacki shows off a hops plant at his family’s plot in Bennington. If successful, they may start selling their crop commercially. (Mark Gutman/Daily News)

The hops plants at the Hojnacki Hops Farm will probably reach about 10 feet tall. The state’s growing beer industry is creating a new demand for the once-popular state crop. (Mark Gutman/Daily News)

Dan Hojnacki shows off a hops plant at his family’s plot in Bennington. If successful, they may start selling their crop commercially. (Mark Gutman/Daily News)

BENNINGTON — The first sprout of a hops plant pokes through the soil at Jim and Claudia Hojnacki’s home on Schad Road.

About a month from now, the plant and many others will be growing voraciously — typically 12 inches per day in ideal conditions. Whence comes the harvest, and then the beer.

The Hojnackis, and their two sons, Dan and Phil, have been growing hops since 2008. If their plans bear fruit, what started as part of Dan’s homebrewing hobby will become a lot bigger.

“These were easy,” Dan said, surveying the original row in his parents’ backyard. “We just decided we should throw some hops in seven or eight years ago, and then I started brewing with them.

“The harder decision was to go with a little more-commercial setup because there was much more cost involved. The next step is potentially to take over one of the fields on our tree farm. That would be the biggest cost step yet.”

The family has created Hojnacki’s Hops Farm, and may be on the crest of a potential beer revival brewing within the state.

As Dan, 31, explains, Central New York was once the nation’s biggest hops producer, before Prohibition and disease essentially wiped it out locally. But new state laws may be fostering a return.

The state’s Farm Brewing Law became effective two years ago. It was meant to create new businesses surrounding the brewing industry, among other aims.

In order to receive a Farm Brewery license in New York State, the beer must be made primarily from locally-grown farm products. The resulting brew will be designated as “New York State labeled beer” if it meets all the guidelines.

Dan and Phil may not seem like your prototypical agriculturists at first. Dan’s a chemical engineer living in Darien, while Phil is a graphic designer who now lives in Buffalo.

But the entire family, in fact, has experience, with Mr. and Mrs. Hojnacki’s Christmas tree farm being a big part of their lives over the years.

Hops flowers are a primary favoring ingredient in beer, including Indian pale ales. They add bitterness, along with other desirable qualities.

The hops plants are perennials, with greenery extending 3 feet in either direction, with the roots reaching 6 feet deep, Mrs. Hojnacki said. Their lifespan is as much as 20 years in ideal conditions.

The plants can be particular nonetheless — at least when cultivated for brewing.

“Each row has its own variety,” Claudia said. “ You don’t want to plant one (variety) next to another. Ideally, they’re on about three-foot centers, and then you’ll see the drip irrigation, the hoses up above.”

You don’t want alfalfa fields anywhere near your plants, she added. Once the alfalfa’s cut, all the bugs living there will move over to the hops crop instead to wreak havoc.

And a hops grower will know to beware aphids.

The family’s commercial-style plot was installed last year. Measuring about 90-by-30 feet, in includes strings suspended from 12-foot poles, so the plants will have something to grow over.

They have 37 hops plants per row, with each requiring about an inch of water weekly. At their peak, they’ll reach about 10 feet tall.

Then the flowers will be harvested, dried, and used for beer. The family estimates they’ll get between 200 and 400 pounds of wet hops initially this year.

“Cornell has really stepped up too,” Claudia said. “They’re looking more into the varieties, and helping the growers like us with pest management. It’s a big part of what we hope to do here. We hope to stay organic.”

As it stands, the hops may be the culmination of a longtime interest.

Installing their commercial-style setup cost about $7,000, and it’s only the second step in the process.

“Right when I got out of college in 2005, I started doing some brewing, and it really picked up just three or four years ago,” Dan said. “We decided to do this last year, because we saw how things were really starting to expand in New York state.”

The family attended a conference two weeks ago in Ontario County, Claudia said, and they were the only people with hops in the ground.

Dan is the brewer in the family, while Phil, 30, is interested in the agricultural aspect, along with much of the plants’ care and upkeep.

“I’m just interested in the growing, the maintenance, and everything that comes with it,” Phil said.

The plants will reach their peak harvest about June 21. Next year, if conditions are ideal, the Hojnackis are hoping to get 90 percent output from their plants.

Then they could start selling their crop to a small brewery. Dan himself is producing about 10 gallons of beer monthly, and is perfecting recipes, with an eye toward potentially getting a Farm Brewer license himself.

Hojnacki’s Hops Farm is one in a string of brewing-related ventures in Wyoming County, which also include the Amber Lantern Brewery and the Silver Lake Brewing project.

Is it exciting to be part of New York’s new brewery wave?

“Definitely,” Dan said. “I wish I had just started sooner. That’s the only thing — Right after college, I wish I would have just jumped in. I definitely regret that, but there’s no reason not to get into it now. “

“People at work are definitely surprised when I tell them we have a hop yard and a Christmas Tree farm,” Phil said.