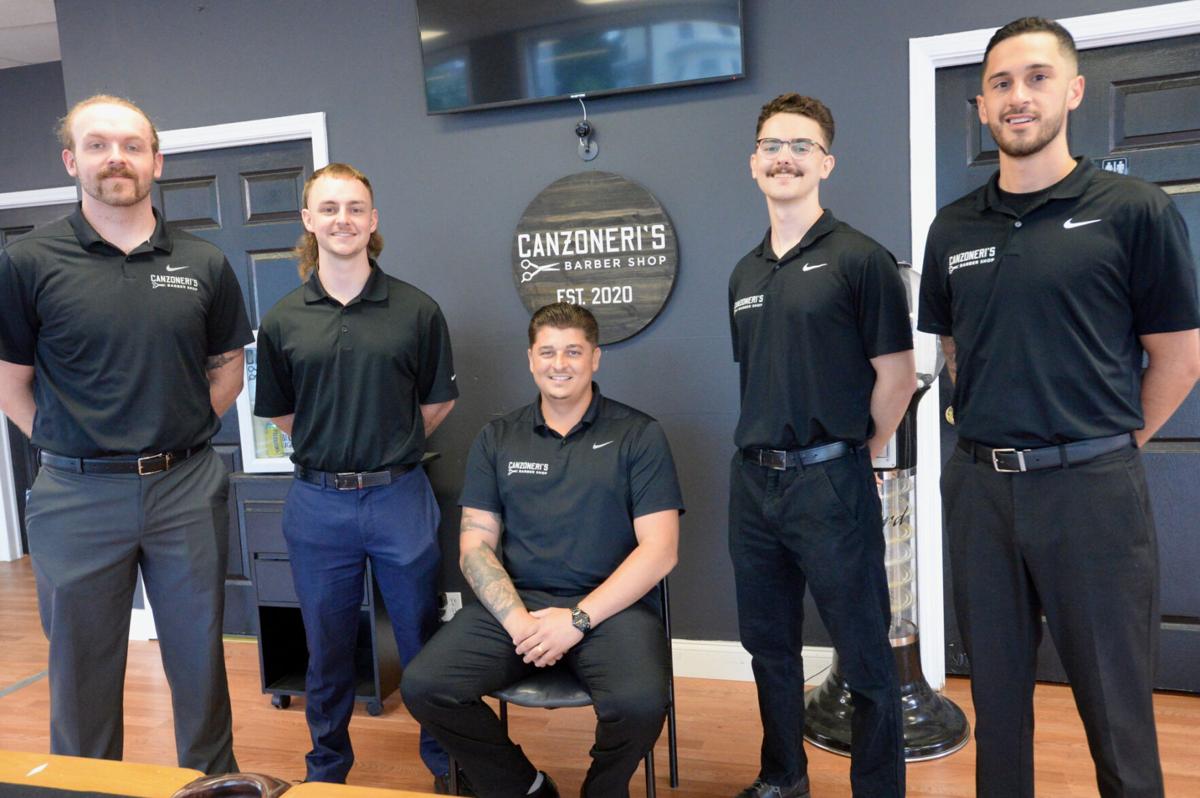 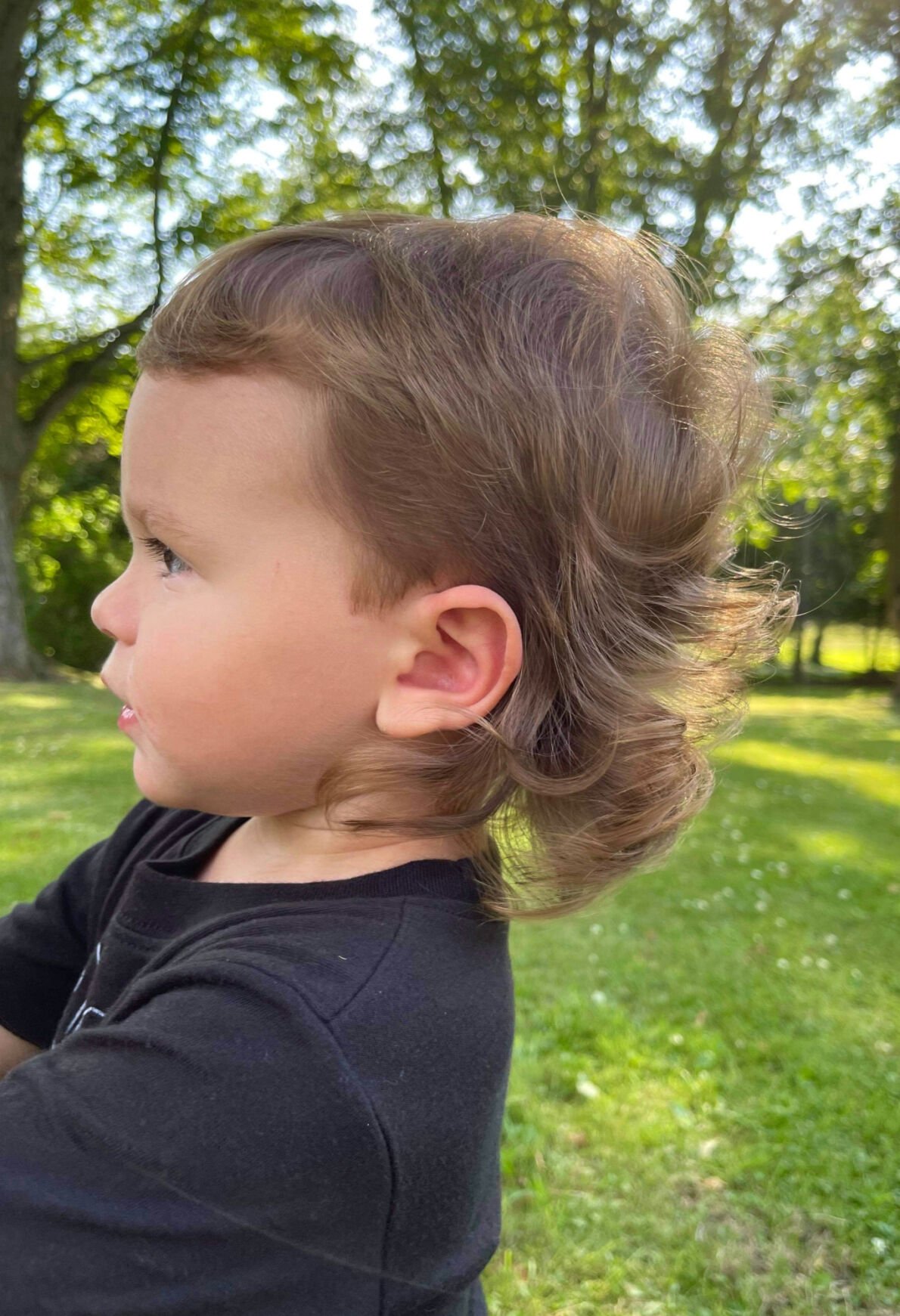 Provided Photograph One-and-a-half-year-old Micah Moretti earned the honor of having his mullet turned into a silhouette graphic that will grace “MulletFest” t-shirts. 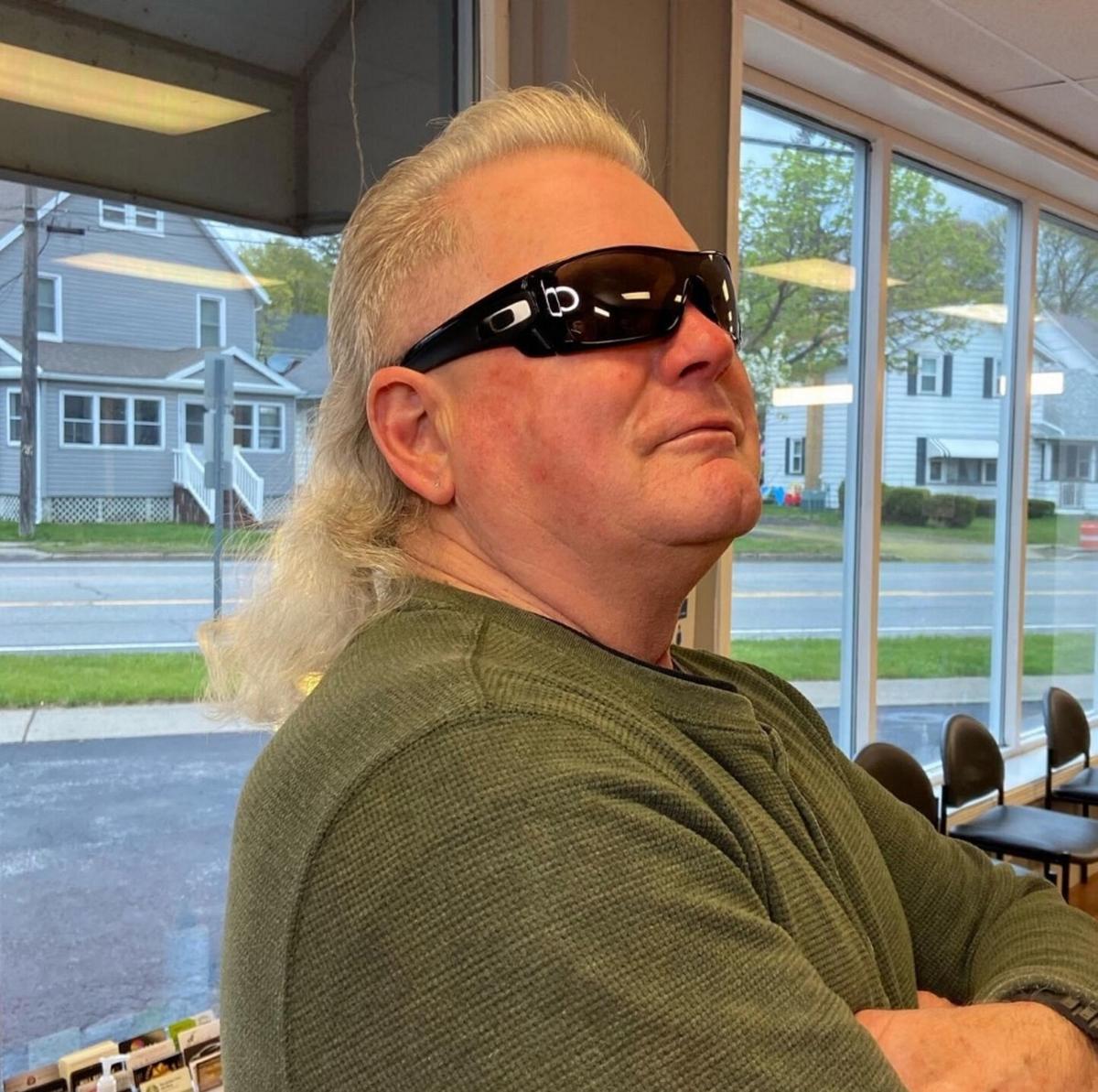 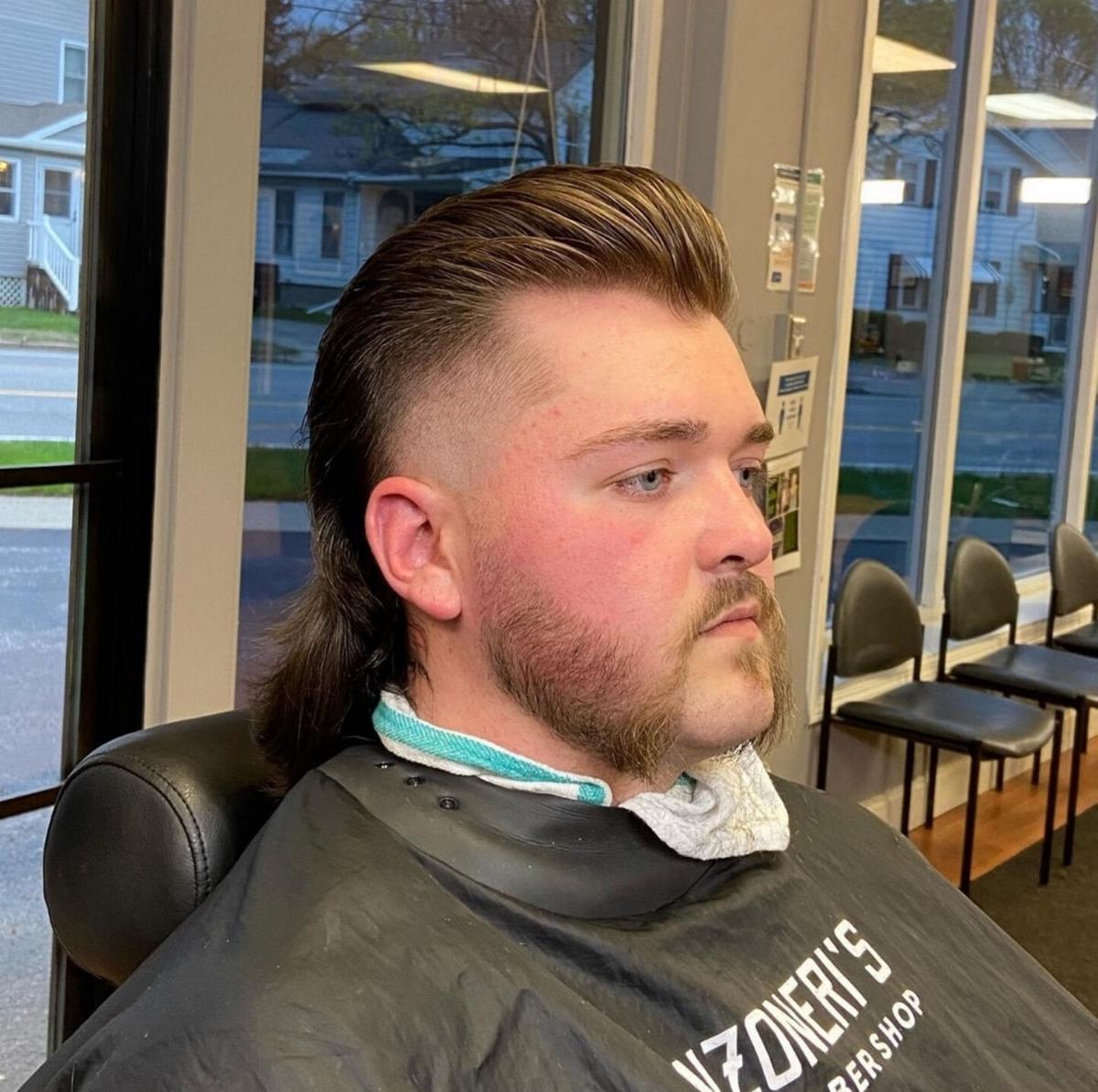 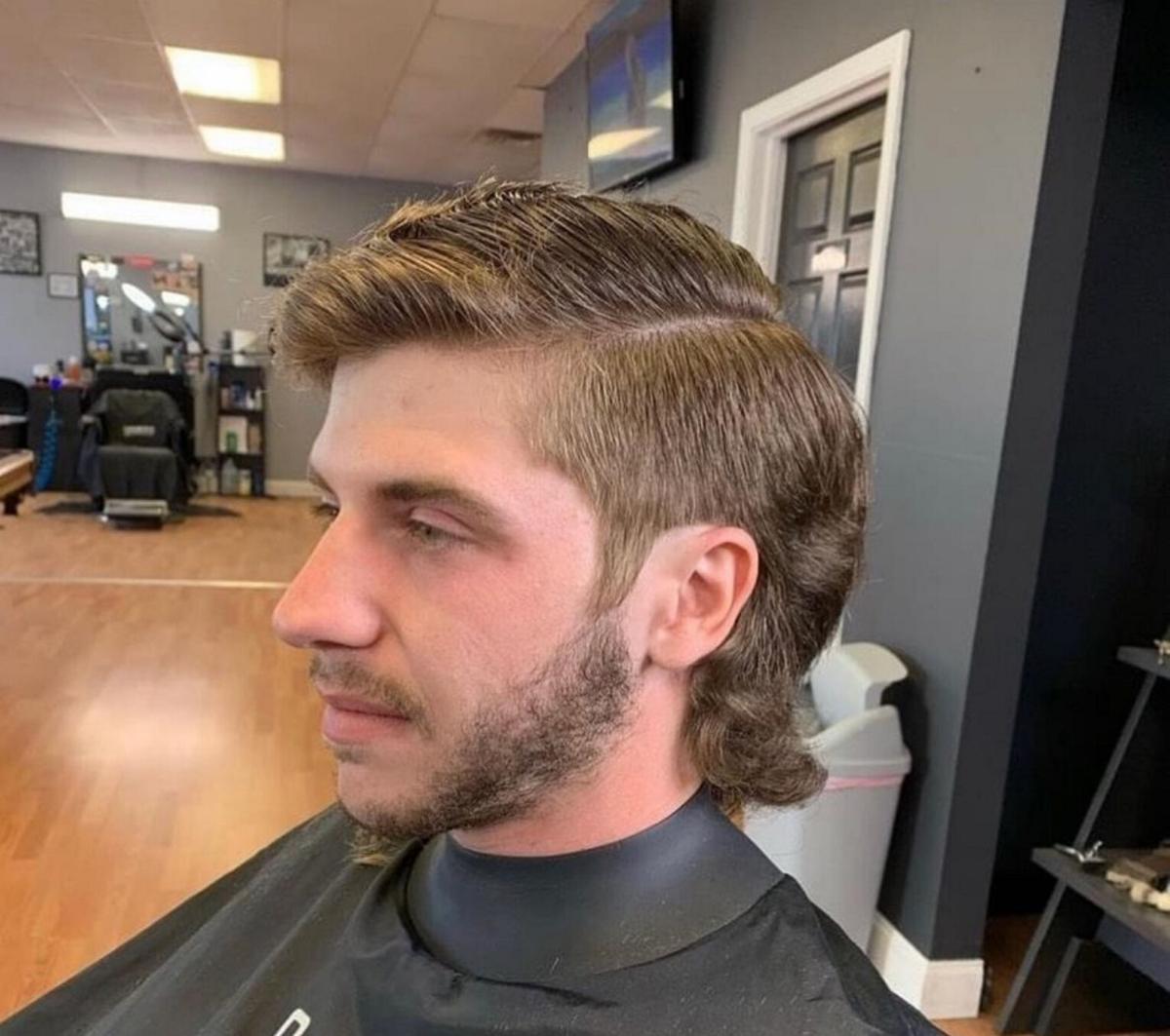 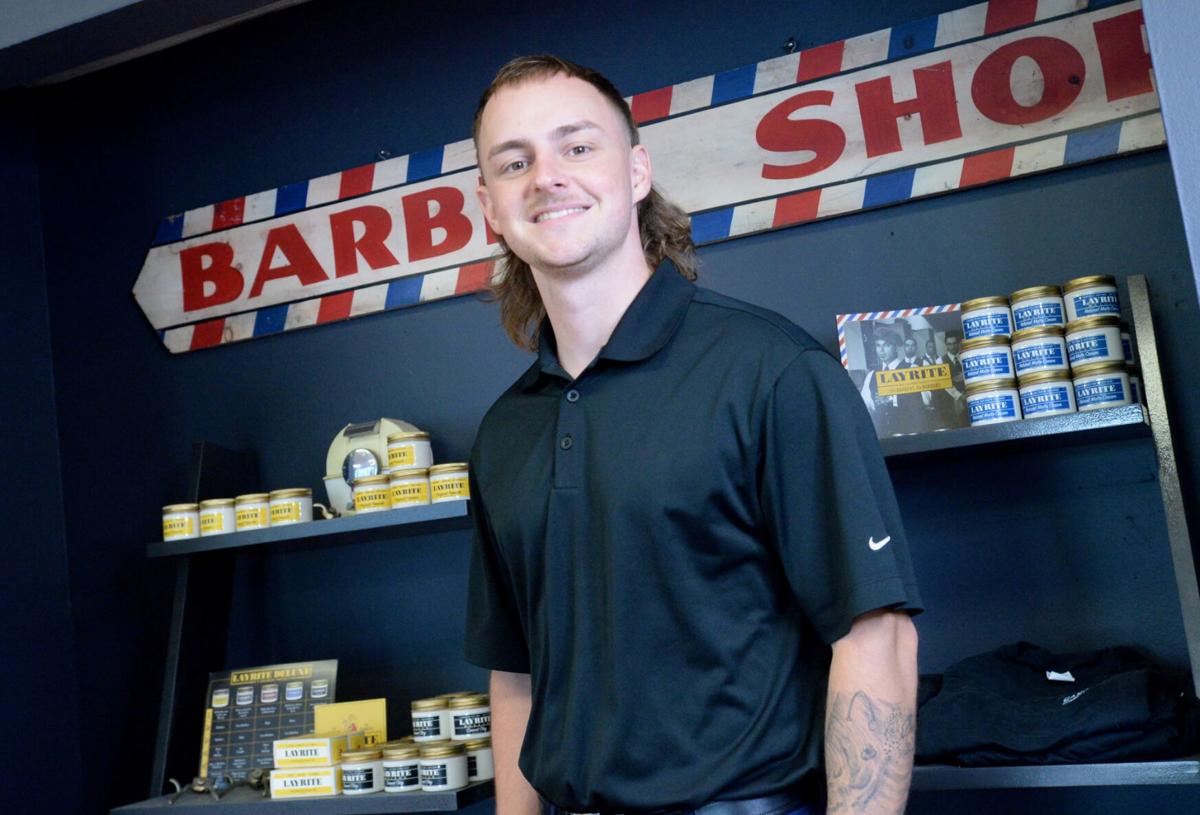 Alex Brasky/Batavia Daily News Tommy Slenker is a barber at Canzoneri’s Barbershop, which recently hosted its first ‘MulletFest’ in honor of the 1980s hairstyle.

Provided Photograph One-and-a-half-year-old Micah Moretti earned the honor of having his mullet turned into a silhouette graphic that will grace “MulletFest” t-shirts.

Alex Brasky/Batavia Daily News Tommy Slenker is a barber at Canzoneri’s Barbershop, which recently hosted its first ‘MulletFest’ in honor of the 1980s hairstyle.

BATAVIA — Whether you like it or not, the mullet is making a comeback.

There are many possible reasons for the resurgence of the mullet, a 1980s hairstyle which features a business-type look in the front and a looser, long look in the back.

The mullet’s rise to prominence began in the ’80s and quickly faded, becoming more of a humorous look that people would wear for a laugh or two from their buddies.

However, the hairstyle has since made a fierce return to the mainstream, with celebrities such as Zac Efron, Rihanna and Miley Cyrus all partaking in the “Mullet Revolution.”

Maybe revolution is too strong of a word, but the return of the “Kentucky waterfall” - one of the many nicknames for mullets - is real, and some attribute its recent rise to the societal changes forced by the COVID-19 pandemic.

“When people were stuck at home without the ability to get a real haircut from a professional, many made the decision to cut their own hair. For anyone who’s attempted to cut their own hair before, they know it’s far easier to cut the sides than to cut the back,” said Tommy Slenker, a barber at Canzoneri’s Barbershop in Batavia. “That, coupled with the fact that people were able to grow through the awkward phase during the stay at home order, sparked the mullet’s return to prominence.”

Whether you agree with Slenker’s take or not, everywhere you look, someone is rocking the “North Carolina neckwarmer” strutting their stuff like it’s 1987.

“Immediately following the reopening of barbershops and salons last June, we saw an influx of mullets,” added Slenker, who has a mullet himself. “And over the last year, it’s become a prominent style within our shop.”

On the front lines of the ‘Mullet Revolution’ have been barbers and hairdressers, like Slenker, who have been tasked with crafting their own version of the “Tennessee tophat” for patrons of all ages. Those barbers and hairdressers accustomed to giving more modern-style cuts have been forced to go outside their comfort zone and use a bit of creativity to develop their own idea of what they envisioned for the ever-so-popular “Mississippi mudflap.”

For the crew at Canz’s, concocting its approach to the “Achy Breaky Big Mistakey” took some discussion. The idea was to go with a traditional look with a new-school twist.

“The traditional mullet is short on top and long in the back, but we went with more of the pompadour style for the top to make it a little more appealing and just make it a true modern-day mullet,” said Canzoneri. “As opposed to the traditional ‘80s-style mullet like people think of.”

The look has been a big hit at Canzoneri’s. So much so that recently, the shop, located on Ellicott Street in the city, hosted its first ‘MulletFest’ in honor of the hairstyle’s comeback.

“Since I’ve been cutting hair over the last 10 years, the mullet started off as a funny high school sports playoff haircut,” said Canzoneri. “Since the pandemic began, it seems as if the mullet is in fact back. First, I would have said it’s a joke. But these guys are taking it serious.”

On July 2, the shop hosted over 20 customers of all ages for ‘MulletFest’, with one participant earning a prize for ‘Best Mullet’ and another posing for a silhoutte image of their mullet, which would be printed on ‘MulletFest’ t-shirts. The winner for ‘Best Mullet’ was Kris McCowen, a 20-year-old from Le Roy.

“My vision was why not - I got a mullet so let’s see how I do,” said McCowen on why he decided to participate in the event. “It would be sweet if I won and I still got the (mullet) because (wearing it is) a lifestyle and it demands respect. I think Joe and the crew did great they made it fun and competitive with all the haircuts they had. Five stars for the boys and their shop.”

The silhouette image was created based on the profile view of the legendary lettuce of Micah Moretti, a 1 1/2-year-old from Pembroke, son of Alex and Hali Moretti.

“We decided to do ‘MulletFest’ for one reason it’s just a fun concept, and everyone who looks at a mullet can’t not smile when seeing one,” said Canzoneri. “It’s been a huge hit with our clients. Every day we have people asking us ‘who’s got the best mullet, who won ‘MulletFest.” The clients are just so intrigued by the fact that people are getting mullets and the amount of mullets we as a barbershop do on a daily basis. At any given time walking into our shop you will most likely see a mullet.”

Somewhere else you’re likely to see a mullet nowadays is the Batavia Ice Rink, where Batavia-Notre Dame hockey coach Marc Staley says the hairstyle is thriving. For hockey players, coaches and parents, however, the mullet is nothing new.

“The sport of hockey has had a very interesting history with hair in general - playoff beards, mullets, shaved sides, dying it blonde, etc.,” said Staley. “These things tend to be cyclical. I remember playing college hockey in the mid-’90s, and we went through a little phase where growing out the (Mullet) was cool. I never really grew it out, but I did shave my sides and go blonde at one point. Thankfully there are no pictures.”

Former York High School student-athlete Riley Stella, 2020 grad, was well-known for an awesome mullet during his days playing for the Golden Knights’ athletics program. As someone who has worn the hairdo since the beginning of its resurgence, Stella’s approach to the mullet is as simple as it gets.

“I got my mullet for a bet that I made with some friends, and apparently, I took the bet a little too seriously,” said Stella, who says he has grown to like the way the hairstyle looks.

“I feel like if I didn’t have the mullet I would look like a child,” added Stella.

The search for a true reason for the mullet’s resurgence remains ongoing. But instead of overthinking it, perhaps the answer is more straightforward than one may think - people like it.

For whatever reason, the mullet is more than a joke nowadays, as it’s beginning to be worn as a fashion statement by both young and older people everywhere.

The mullet is in business, and it doesn’t seem as if the party will stop any time soon.