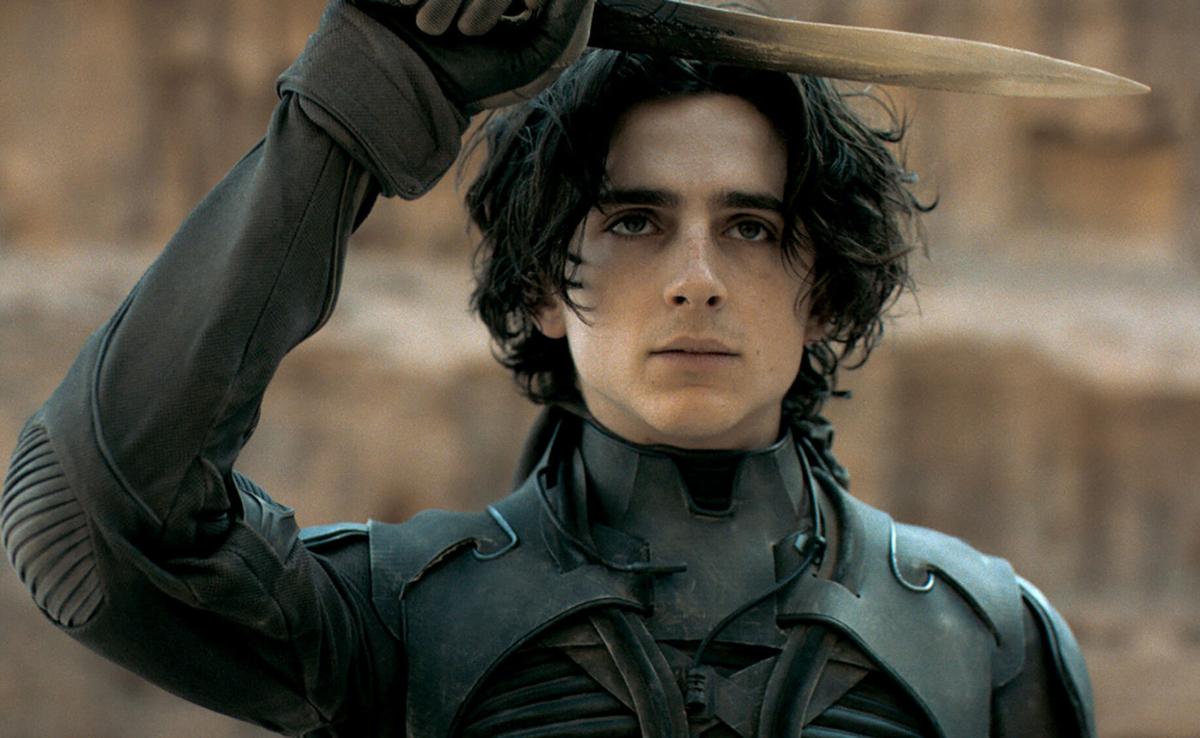 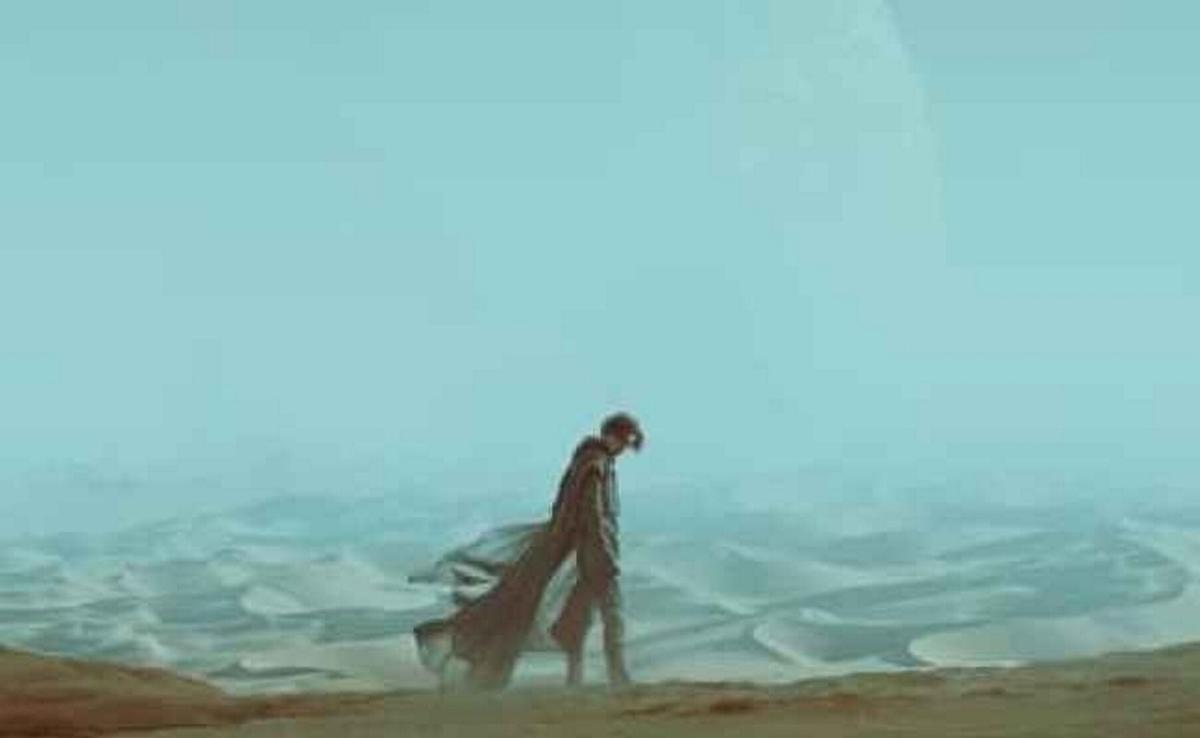 Timothee Chalamet as Paul Atreides in the desert of Arrakis. Warner Bros. 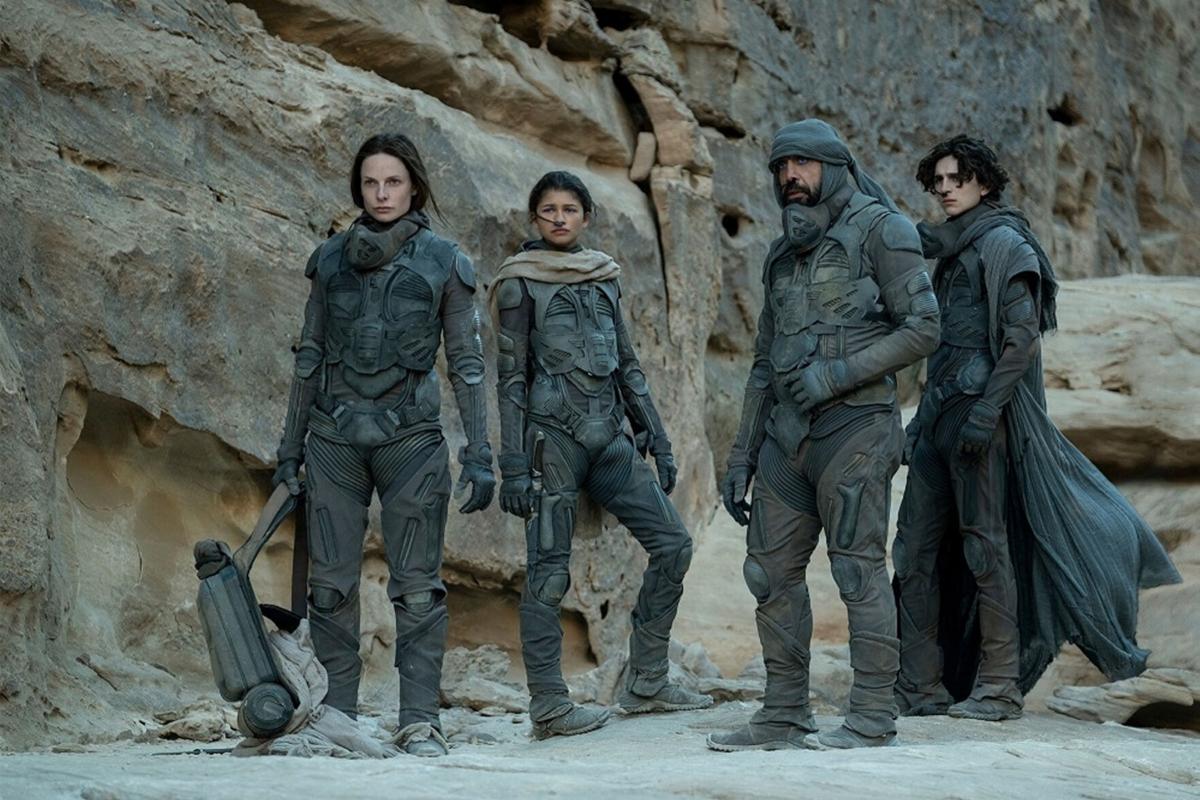 If you’re at all interested in what a reliably compelling, stubbornly solemn commercial filmmaker can do with money, imagination and no little nerve, “Dune” is epic enough, says one reviewer. Warner Bros. Pictures

From left, Zendaya and Timothee Chalamet in the film “Dune.” (Warner Bros. Entertainment/TNS) 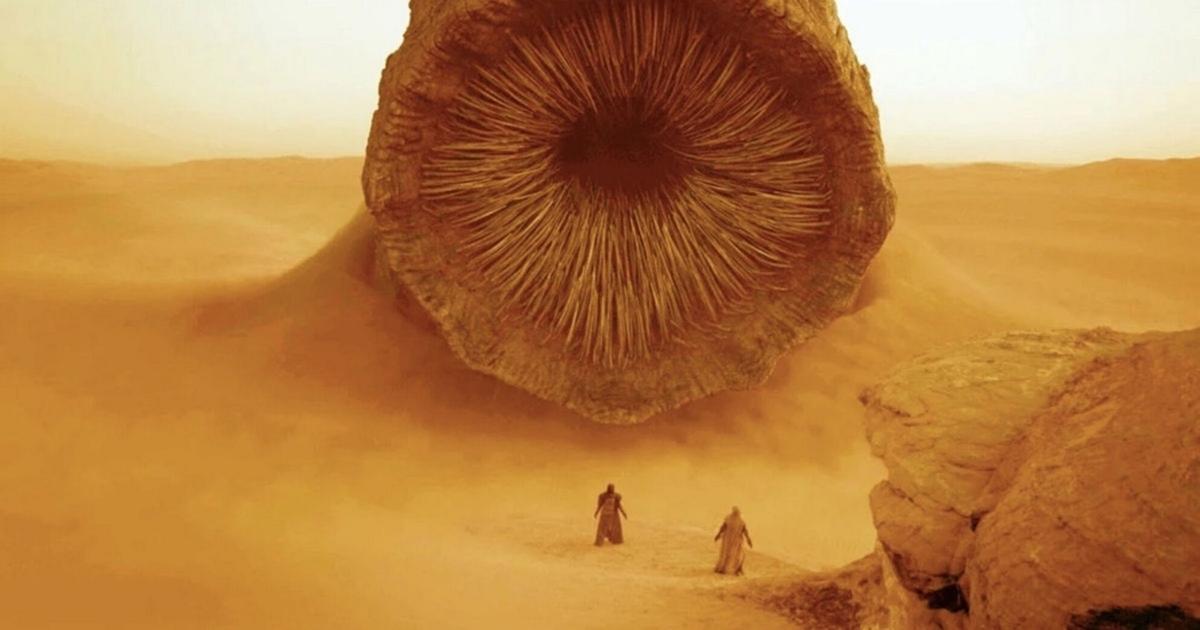 A massive sandworm emerges from beneath the sand in search of prey in “Dune.” Warner Bros. Pictures 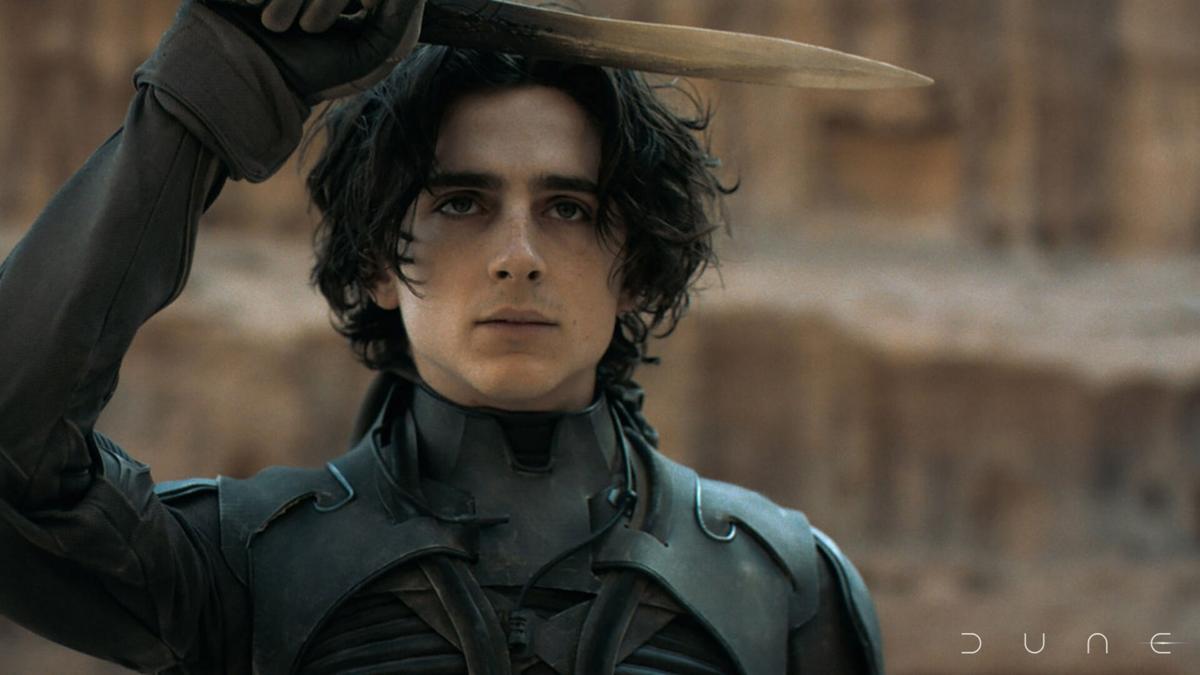 Timothee Chalamet as Paul Atreides in the desert of Arrakis. Warner Bros.

If you’re at all interested in what a reliably compelling, stubbornly solemn commercial filmmaker can do with money, imagination and no little nerve, “Dune” is epic enough, says one reviewer. Warner Bros. Pictures

From left, Zendaya and Timothee Chalamet in the film “Dune.” (Warner Bros. Entertainment/TNS)

A massive sandworm emerges from beneath the sand in search of prey in “Dune.” Warner Bros. Pictures

The patient, densely embroidered narrative invests heavily in themes of environmental, ecological and colonialist exploitation. Earnest sentiments such as “When you take a life, you take your own” go against the grain of most successful Hollywood-financed science-fiction forays. Even in a post-”Star Wars” smash such as “Avatar,” still the biggest hit in the universe, the point — setting aside the anguish over genocidal imperialist conquerors — is how many enemies a noble warrior can kill under pressure, in a hurry, so that we feel good and (per “Star Wars”) wouldn’t mind putting quarters in the same game again right away.

“Dune” defies all that. So does its latest screen adaptation, a lot of which I love.

The director/co-writer Denis Villeneuve takes on less than half of Herbert’s first “Dune” novel. He and his vast army of design and effects collaborators have created a feat of visual and aural hypnosis. When the sandworms on the desert planet Arrakis rise to the surface, the toothsome sight isn’t for fright or gotchas but, rather, wonderment. When teen messiah Paul Atreides and cohorts board an ornithopter, the eight-blade dragonflyesque aircraft soars in more ways than one; it’s a triumph, one among hundreds, of digital magic, convincingly rough-hewn design and a soundscape that is truly a feat of subtle brilliance.

At one point on Arrakis, the ecologist Kynes (handled with force and sublime authority by Sharon Duncan-Brewster, in a gender-switched role from the novel) says: “If you get a little higher, you’ll get a better view.” The movie, premiering simultaneously in theaters and on HBO Max, does the hallucinating for you. If you’re at all interested in what a reliably compelling, stubbornly solemn commercial filmmaker can do with money, imagination and no little nerve, “Dune” is epic enough — even if there’s a wee hole in the middle, where a more compelling protagonist belongs.

Timothee Chalamet is the wee hole. This is somewhat surprising, since the young actor has done so well in both period and contemporary material in recent years. Maybe it’s my fatigue with Chosen One fantasies. Partly it’s director Villeneuve’s pictorial framing of Chalamet in repose, in various moods: preoccupied Bronte hero, cliffside; psychic communicator in smoldering yet boyish close-up, about to use “The Voice” on an adversary; and so on.

He’s not a big drag on the movie overall, but Chalamet’s work tends toward single notes of opaque introspection rather than chords of fuller emotion.

The year is 10191. Atreides (Chalamet) has been bred to become a savior, though he doesn’t realize it yet, known as the kwisatz haderach. On home planet Caladan, his folks Duke Leto Atreides (Oscar Isaac) and Lady Jessica (Rebecca Ferguson) get their marching orders from Padishah Emperor Shaddam IV to take over the spice-mining operations on Arrakis, aka Dune, and indeed the entire planet with all its conquered citizens, known as Fremen.

Baron Harkonnen (Stellan Skarsgard, looking like a flying Little Face from “Dick Tracy”), former ruler of Arrakis: not happy. Always greedy. Terrible steward of Arrakin’s precious resource, which is the key (I still don’t get this part, in any version) to interplanetary travel and superpowers too trippy for a Marvel movie.

Paul is a young knight, cast in the mold of King Arthur and his gang in days of old. The new “Dune” movie plays out like his quest (mostly on Arrakis) to become the much-prophesied “Muad’Dib,” who will lead the Fremen to freedom and himself to the arms of the young woman he’s dreamed about for years. The actor Zendaya plays Chani, not particularly prominent or verbal in this first installment. (If they get the greenlight for part two, she’ll talk more.)

To what degree does Villeneuve’s “Dune” resemble a golf tee for that hoped-for second half? A little. It’s not making it’s first-halfness a secret. “Part One” hits the screen, right after the title, early on. “This is the only the beginning,” we’re reminded two-and-a-half hours later. I don’t relay this information to make “Dune” seem like a chore, though to some I’m sure it will be.

To me, it’s a pretty enthralling testament to Villeneuve, to cinematographer Greig Fraser, to production designer Patrice Vermette and even to composer Hans Zimmer, working without his usual bombast. Steadily, “Dune” accumulates its gallery of amazements, with some genuine suspense in key sequences, such as the rescue of the Fremen miners. Not even the conspicuous (and, I think, unfortunate) shortage of Middle Eastern actors in the Fremen ranks can thwart the achievement. Nor can Chamalet’s studious, somewhat becalmed central performance.

This “Dune” is the polar opposite of David Lynch’s 1984 inchoate craziness, with Patrick Stewart running around with a pug dog and (in the movie’s standout turn) Kenneth McMillan’s lascivious, boil-laden Baron.

The ideal screen “Dune” would consist of one part Lynch and two parts Villeneuve. Is there enough spice on Arrakis to make that happen?

Where to watch: In theaters and streaming on HBO Max.