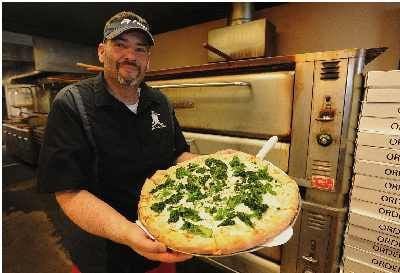 Paul Berardini, owner of Big Pauly’s Pizza in Batavia, shows off his signature dish, the Classic White Pizza, in front of the ovens in his restaurant. (Rocco Laurienzo/Daily News) 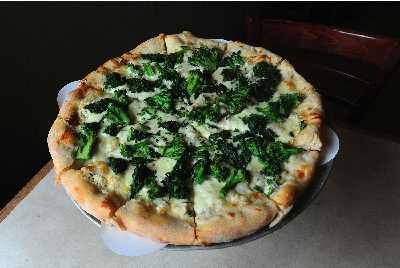 Paul Berardini, owner of Big Pauly’s Pizza in Batavia, shows off his signature dish, the Classic White Pizza, in front of the ovens in his restaurant. (Rocco Laurienzo/Daily News)

BATAVIA — The wonderful thing about pizza is that there is no right or wrong way to make it. No template exists for the perfect pizza. Instead, it is the culinary equivalent of an artist’s canvas. Add whatever you like.

But there are culturally accepted norms. For instance, in pizzerias across Western New York, a white pizza typically comes with ricotta cheese in place of tomato sauce, thin slices of tomato, and onions cut into strings.

But that’s not how Paul Berardini cooks up his Classic White Pizza at Big Pauly’s, 314 Ellicott St. Berardini still uses the ricotta cheese base, but he tops his with broccoli, spinach and mozzarella cheese.

Broccoli and spinach? On pizza? That sounds like a cruel trick to get children to eat their vegetables. But the pie has proven to be so popular with Batavians that it is Big Pauly’s signature dish.

“I’ve made a few (white pizzas) at different pizzerias I’ve been at here in town,” said Berardini. “Just the fact of putting it together with the broccoli and the spinach, it’s something healthy. I mean, I know cheeses aren’t really that healthy and the broccoli and the spinach are, but it needed a flavor to go with it. It’s like a ravioli, a cheese ravioli that’s filled with cheese and spices. Instead of doing a ravioli, we’re putting it on the dough.”

Berardini’s ricotta cheese is mixed with garlic, oil and a spice blend that he wouldn’t divulge. He spreads it across his dough “like it’s a cake frosting” then adds the other toppings.

“We sell a lot of them,” he said, estimating the restaurant will fill 20-25 orders for white pizza in a typical week and maybe double that during Lent. “We sell more during Lent, because it’s something different.”

While the pie is identified on the menu as the Classic White Pizza, regulars and employees know it simply as a Q. That’s the shorthand code Berardini developed to identify his menu items. A cheese and pepperoni pizza is an X. Cheese, pepperoni and sausage is a B.

“That shortens it up and makes things faster in this business,” Berardini said. “Because in the pizza business, you want to get the food out in a hurry.

“A customer said to me one time ‘I see my name in the one corner and in the left corner is a Q. What’s that?’ I said that’s the code for white pizza. So now, every time this customer calls and orders a large Q, we know who it is.”

The pizza has a light, flaky crust that’s a little thinner than what is typically found in Western New York, but isn’t nearly as narrow as New York City pizza.

“We don’t want it too thin, so you pick it up and it all falls off, like when you go to New York City or New Jersey,” Berardini said. “We want our pizza to be a little firm.”

And it needs to be firm to hold up to the weight of four toppings.

When asked what kind of chicken wings would pair well with the white pizza, Berardini seemed stumped, before suggesting the gar-hot, a mix of garlic parmesan and hot sauce.