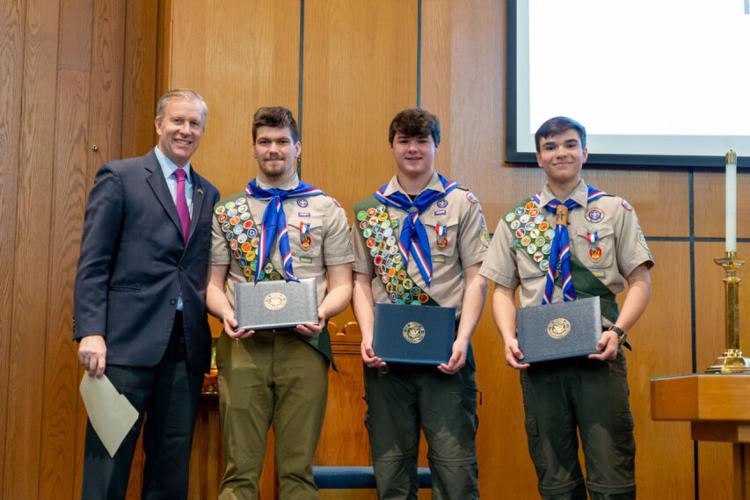 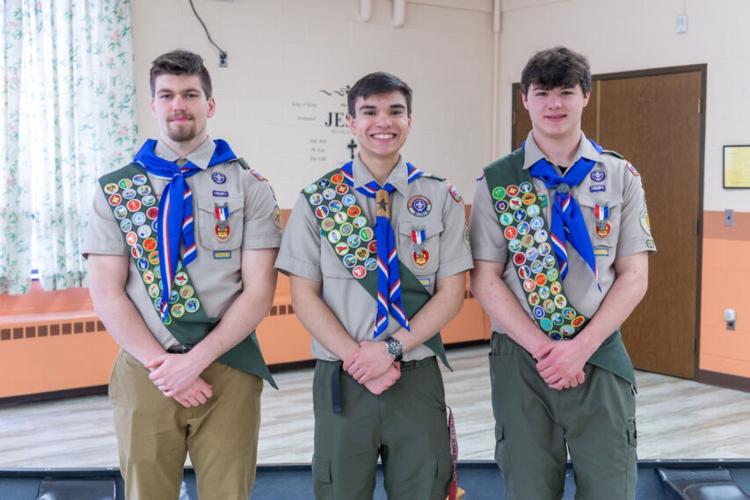 Nicholas Grover, Aidan Clark and Luke Geiger have each been recognized as Eagle Scouts after completing a series of final service projects. 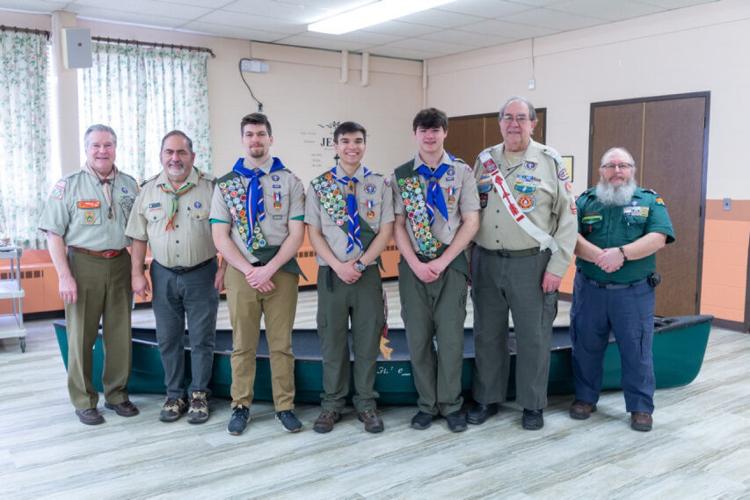 Nicholas Grover, Aidan Clark and Luke Geiger have each been recognized as Eagle Scouts after completing a series of final service projects.

The trio ended up being recognized in one ceremony though each learned at a different time that he would become an Eagle Scout.

“They’ve all been in scouts for 11 years. That started in Cub Scouts and bridged to Boy Scouts,” Boy Scout Troop 6006 Past Adult Leader Steve Ognibene said. “Each one of them had their Board of Review at different times. That’s when they find out if they achieved the rank of Eagle. The ceremony itself is done at a later date.”

Geiger’s Eagle project was a one-mile prayer trail behind Northgate Methodist Church Batavia, that included a 12-foot wooden cross, birdhouses, gardens on the ground with sundial and benches. The dollar value of the project is $18,000 with 500 man-hours. He gave his mentor pins to each of his Cub and Boy Scouts leaders Tracy and Nick Grover. He also gave a mentor pin to Ognibene.

Grover’s project was at Galloway Park on Galloway Road in the town of Batavia. He designed and built a trail through a wooded area that is 8 feet wide, adding one new bench and refurbishing another bench. He also made trail markers to mark the path. He gave his mentor pin to Ognibene.

There was a slide show of photos from the events Geiger, Grover and Clark, were in from Cub Scout years to completing each one’s Board of Review.

“Luke had received his about a year and a half ago but due to COVID, he held off on his ceremony. He waited for his friend, Nicholas. The two of them were trying to plan it and they couldn’t because of COVID. When they realized that their other friend (Aidan Clark) was going to achieve his, they held off, basically, until he achieved his and they said, ‘OK, now, we’ll have it,’” Steve Ognibene said.

“I’ve known them since they were young. I’ve personally known them for over six years,” Ognibene said. “Aidan, I’ve known since he was 4 years old. I actually was his preschool bus driver at one point when he first started preschool. I’ve personally known him and the family for 14 years. The other two boys, I met them when they bridged from Cub Scouts to Boy Scouts and was one of their mentors, along with their parents.”