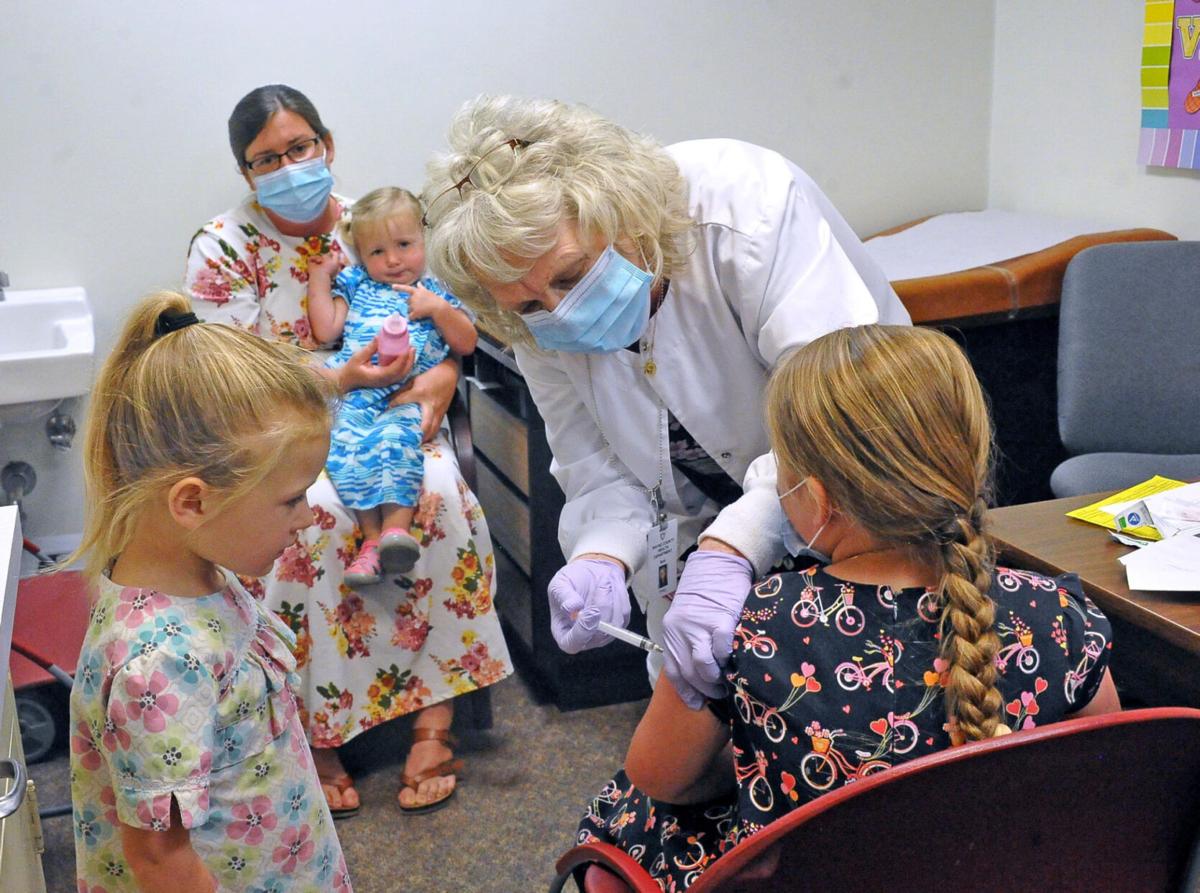 Mike Schenk/The Daily RecordKaia Amstutz, 4, watches closely as older sister Carmyn gets an immunization shot from Wayne County Health Department nurse Tami Bucklew. Kaia was next in line for her shots as their mom Kay holds 18-month-old Olivia, who was also awaiting shots. 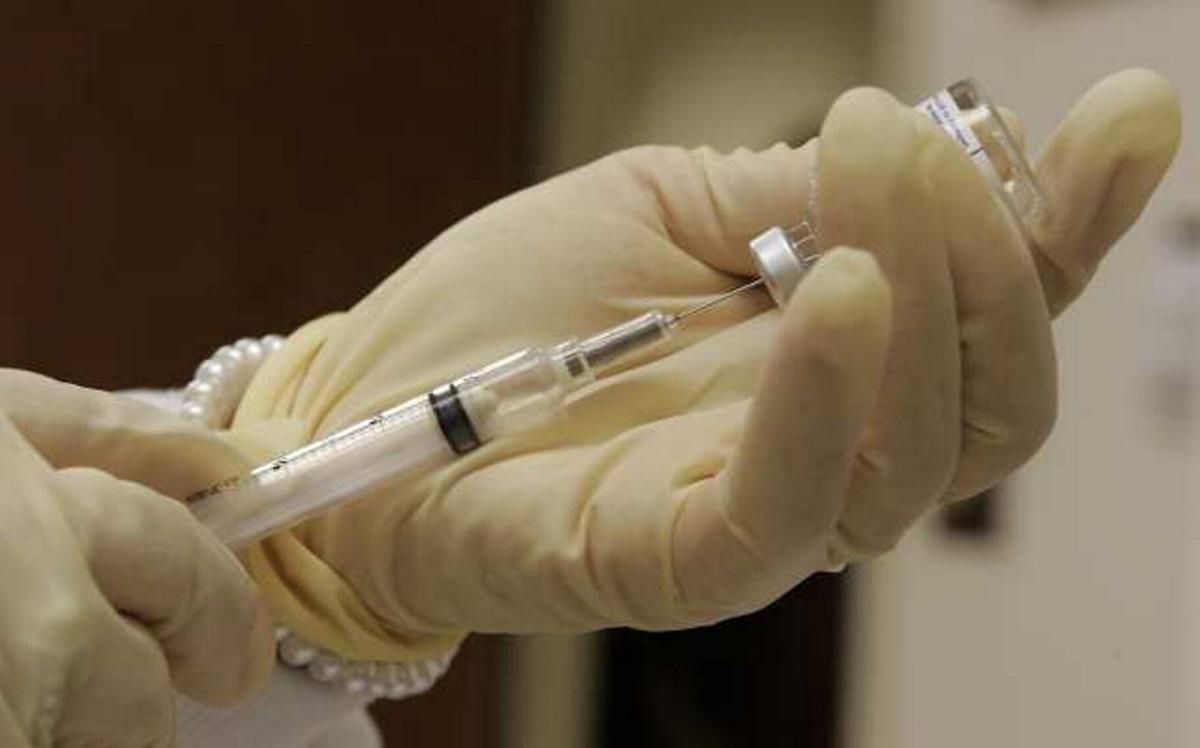 Mike Schenk/The Daily RecordKaia Amstutz, 4, watches closely as older sister Carmyn gets an immunization shot from Wayne County Health Department nurse Tami Bucklew. Kaia was next in line for her shots as their mom Kay holds 18-month-old Olivia, who was also awaiting shots.

Eight families whose children were barred from school because of medical vaccination exemptions filed a federal class-action suit against the state Health Department and their respective public school districts to challenge regulations that allow educators to override immunization exemptions for students with underlying conditions.

“This case was necessitated because hundreds, if not thousands, of medically fragile children in New York state have been denied an education, kicked out of school,” said Gibson, adding the affected students are often bullied or socially ostracized as tension mounts over parents’ decisions to vaccinate their children. But the recent suit concerns students who don’t have a medical choice.

Gibson, the lead attorney on the case, is an adjunct professor of law at Cornell University and an associate at Ithaca firm Schlather, Stumbar, Parks & Salk.

The state Health Department would not comment, citing pending litigation.

Squier, Coxsackie-Athens superintendent of schools, did not return multiple calls for comment Thursday and Friday about the district’s policy to review a student’s medical immunization exemption or the number of students who submit exemptions to the district each year.

Doctors or physicians can sign a state Health Department’s immunization medical exemption form to prevent immune-compromised students, or children with underlying conditions, from getting a vaccine that could be detrimental to the child’s health.

Two mothers involved in the litigation shared the stories of their teenaged daughters who have several auto-immune diseases and were not allowed to return to school after district administrators refused to accept their medical immunization exemptions. The parents spoke during Thursday’s press call, but did not identify themselves, their children or respective school districts, citing the Health Insurance Portability and Accountability Act.

One mother said her daughter has underlying medical conditions that, if she received some of the state’s required immunizations, could cause her to develop Guillain-Barré syndrome — a rare disorder where the body’s immune system damages nerve cells, causing muscle weakness and sometimes paralysis, according to Centers for Disease Control & Prevention.

The student’s mother procured multiple valid exemption forms from other specialists and immunologists familiar with her daughter’s case at the district’s request, she said, but those documents were also denied.

“The district sent it to a school district consulting doctor, a school physician, who has never met my child,” said the mother, who spoke under the name Jane Smith.

“...She was excluded from school,” Smith continued about her daughter. “It was pretty widely known among her peers. We were under a pretty horrific amount of stress and trauma.”

The parent’s state senator and assembly member called the school superintendent, urging him to accept the exemption, but the superintendent refused and forwarded it to the state Health Department for further review.

“You have a gene that could paralyze or kill you, but have to get it [the vaccine] in order to graduate?” Smith asked. “I was afraid of her pending removal from school and not being able to protect her.”

The other mother, who spoke under the name Jane Doe, recalled how her daughter was forced to be homeschooled after their school district’s physician would not accept her exemption without department of health review.

“She left school lonely, isolated and confused,” Doe said. “As a family, we knew it was the right heath decision to make, but it was very difficult to explain we had to compromise her health to attend public school.”

“We’ve always had a medical exemption because the program was enacted to protect medically fragile kids, because we recognize for some children, it’s not safe for some of them to get one or more of the vaccines,” Gibson said. “For a long time, that was a straightforward process. In recent years, there’s been a real push to tighten these policies and regulations that have really overruled the spirit of that medical exemption and made it almost impossible for medically fragile kids to get an exemption.

“And even when they do, it subjects them to so many unconstitutional burdens. It really harms these kids we say we’re trying to protect.”

“It has come to our attention that apparently invalid medical exemptions have been provided to families seeking to avoid required vaccinations,” according to a July 16, 2019, Health Department notice. “...The department has also learned of incidents of parents intentionally misleading physicians who are not familiar with their family regarding the true identity of the children they bring to the practice. Parents may bring in a child who is not their own, so that a blood test for immunity can be drawn in another child’s name.”

Medical exemptions for student immunizations remain legal under the new law, but plaintiffs — the eight affected families and Children’s Health Defense — argue in the July 24 federal suit that school administrators’ refusal to honor the exemptions, which barred their children from attending school, is unconstitutional, and district physicians with no knowledge of their children’s medical conditions or history should not be allowed to override the decision.

“Now we’re telling those very children we’re allowing a school principal to overrule that decision without seeing any [of their] medical records,” Kennedy Jr. said during Thursday’s event. “That is barbaric. It’s wrong. It’s anti-American and we believe strongly it’s against the law and the constitution, and that’s why we’re bringing this lawsuit.”

The attorneys, with Children’s Health Defense, request the court find the state policy unconstitutional and allow the children to return to school.

Sussman and Gibson said the group filed the suit in the middle of summer to probe a change before the 2020-2021 academic year begins after Labor Day, Sept. 7. The state is expected to make its final decision about reopening schools next week, or by Aug. 7.

“By filing this summer, we can give everyone a chance to be reasonable and let these kids back into school this fall while everyone learns online and is socially distanced,” Gibson said. “We need to get this relief to everyone so you don’t need to spend tens of thousand of dollars to file a lawsuit and get your rights respected.”