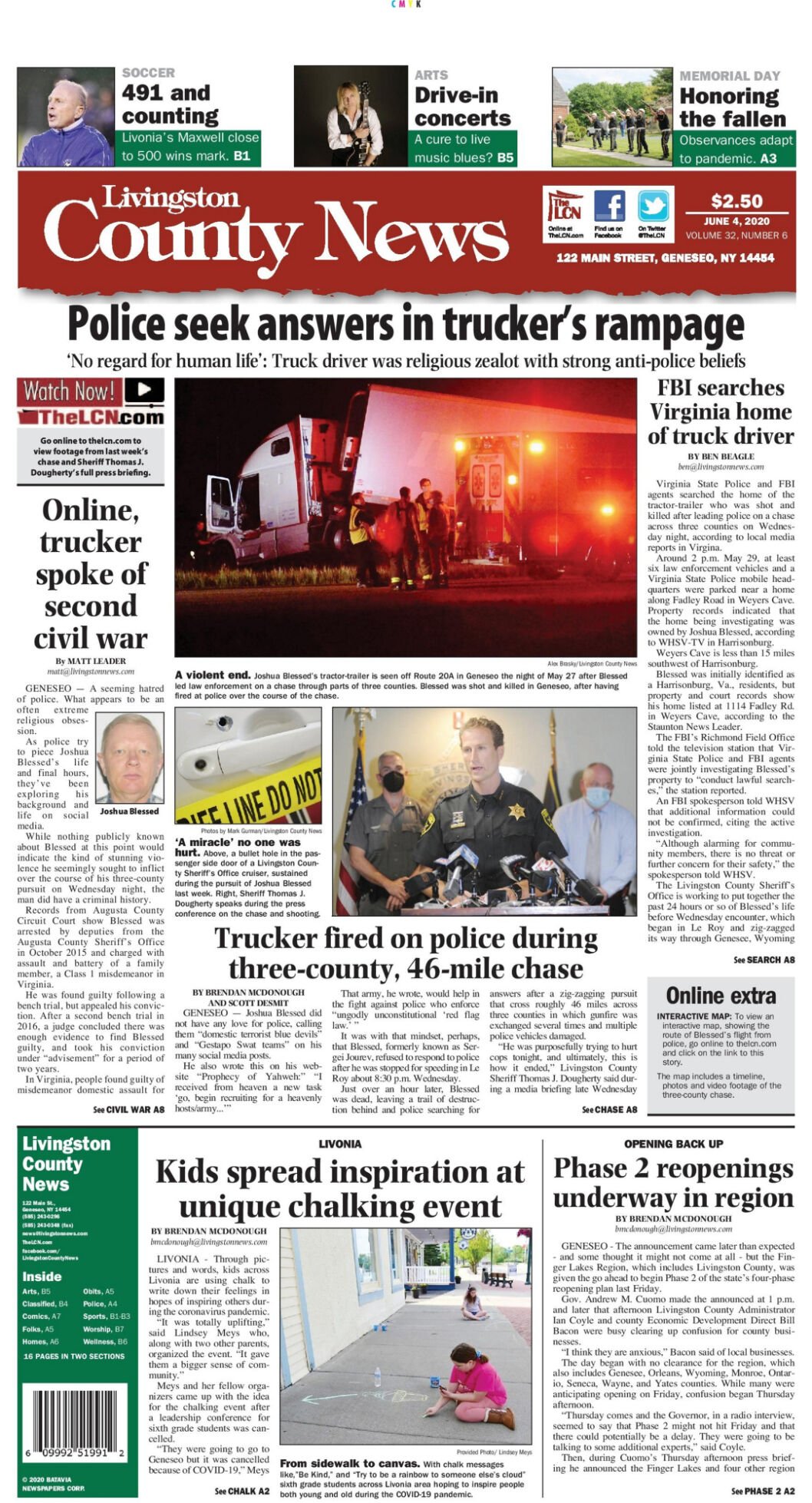 The Livingston County News was awarded first place in the New York Press Association’s Better Newspaper Contest in the spot news category for the newspaper’s coverage of the May 27, 2020, police chase involving a tractor-trailer that ended with a police shootout in Geneseo. 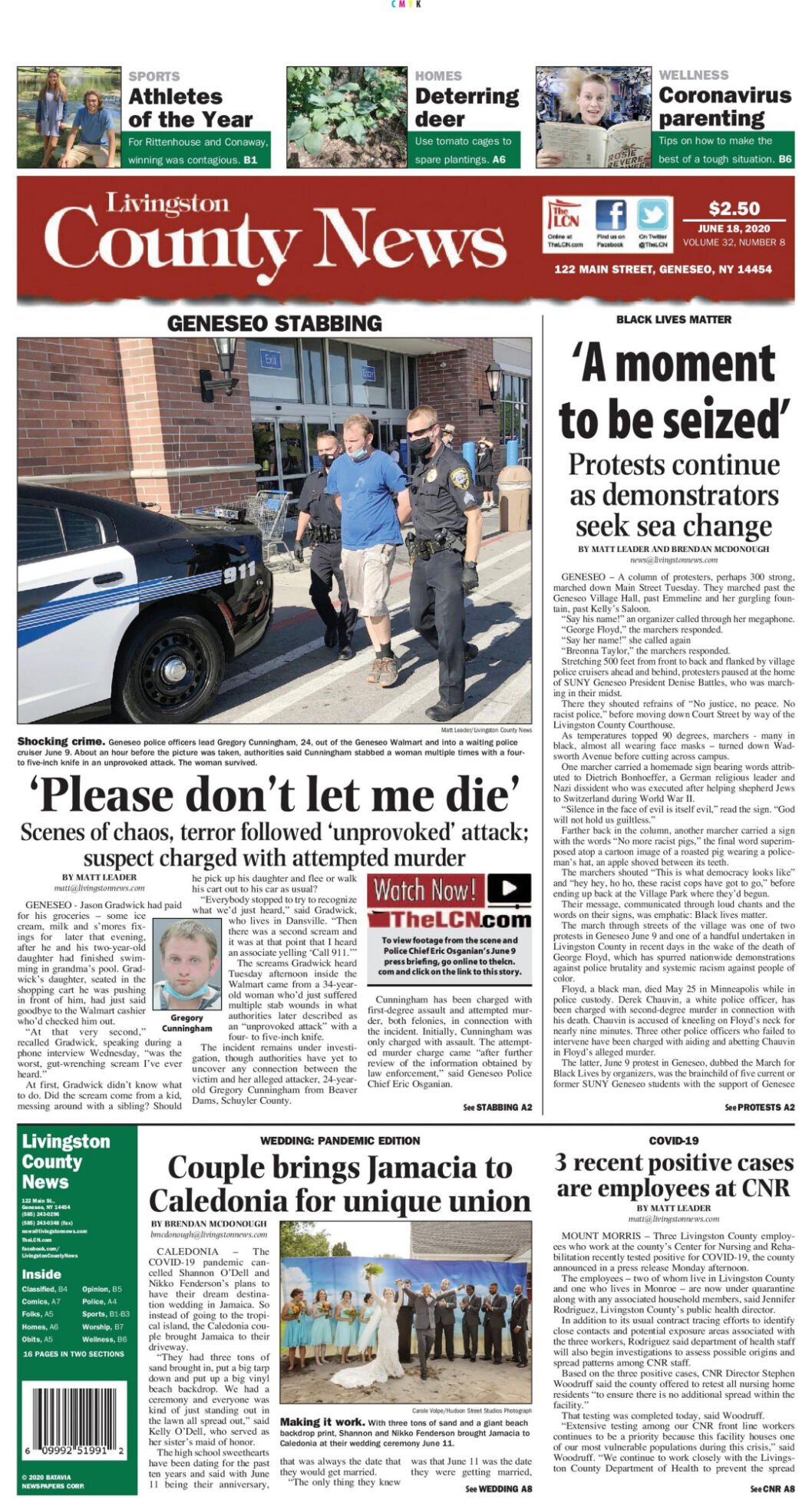 The Livingston County News was awarded second place in the New York Press Association’s Better Newspaper Contest in the spot news category for the newspaper’s coverage of the June 9, 2020, stabbing at the Geneseo Walmart.

The Livingston County News was awarded first place in the New York Press Association’s Better Newspaper Contest in the spot news category for the newspaper’s coverage of the May 27, 2020, police chase involving a tractor-trailer that ended with a police shootout in Geneseo.

The Livingston County News was awarded second place in the New York Press Association’s Better Newspaper Contest in the spot news category for the newspaper’s coverage of the June 9, 2020, stabbing at the Geneseo Walmart.

GENESEO — The staff of The Livingston County News and The Daily News have been honored with two awards for excellence from the New York Press Association in the Association’s 2020 Better Newspaper Contest.

Both awards were in spot news reporting, including a first place award for coverage of the May 2020 tractor-trailer pursuit that ended with the trucker’s death in a shootout with police in Geneseo.

Staff from both The LCN and Daily News contributed to the first-place story.

“While the awards were presented to The Livingston County News, staff from both our papers share in the awards. We work collaboratively to cover the news of the GLOW region, sharing stories and resources and this story was a strong example of our those combined efforts,” said Ben Beagle, regional editor.

“Readers are the real beneficiaries here,” Beagle said. “It is with their support that we are able to provide the largest staff of news reporters in the GLOW region.”

Individuals cited on the award include Matt Leader and Brendan McDonough of The LCN, Alex Brasky and Scott DeSmit from The Daily News, and Beagle.

“This is a compelling story with good use of police information while actually telling the story,” the judges wrote. “What’s impressive is that one reporter stayed with the chase, and also the trust the police evidently have for the reporter to provide all of these candid facts. Well done.”

On May 27, 2020, an evening traffic stop of a tractor-trailer for speeding in Le Roy took a strange turn that would ultimately end about an hour later with a police shootout in Geneseo. Before it ended the tractor trailer driver would lead police on a zig-zagging pursuit across three counties and 46 miles that at times reached high speeds and saw the truck driver shoot at pursuing law enforcement officers.

Coverage began in Batavia with videographer Alex Brasky providing updates via social media that were transferred into a story on the websites of The LCN and The Daily News. Brasky stayed with the pursuit while other staff joined in and picked up on various threads.

Coverage expanded through the night as staff gathered eyewitness videos and statements. The story expanded the next day as details were learned of the trucker’s past, including social media posts that called for revolution, and a law enforcement briefing showed the destruction wrought on police vehicles – including one bullet hole that came within inches of where an officer’s head could have been during the pursuit.

Staff took on various aspects of the story – Leader delved into the trucker’s past and spoke with a variety of law enforcement experts; McDonough and DeSmit covered the perspective of Livingston and Genesee county law enforcement officials who were most involved in the pursuit; and other staff, including Matt Surtel and Brian Quinn talked with witnesses.

Also included in the coverage online was an interactive timeline featuring photos and videos of the pursuit.

LCN also received a second place award in the spot news category for Matt Leader’s coverage of the June 9, 2020, stabbing in the Geneseo Walmart.

The story began when word came that Walmart was being put into a lockdown. Leader headed to the scene. The paper’s initial reporting took place online and as the story developed, Leader was able to gather witness accounts that portrayed the frightening situation inside.

The quick response also allowed the LCN to have the only pictures of the suspect as he was led out of the store and questioned by police.

NYPA, which oversaw the judging of 2,440 entries from 151 newspapers across the state, awarded recognition at the its 2021 NYPA Virtual Spring Conference. The conference was streamed online for a second consecutive year due to the ongoing COVID-19 pandemic.