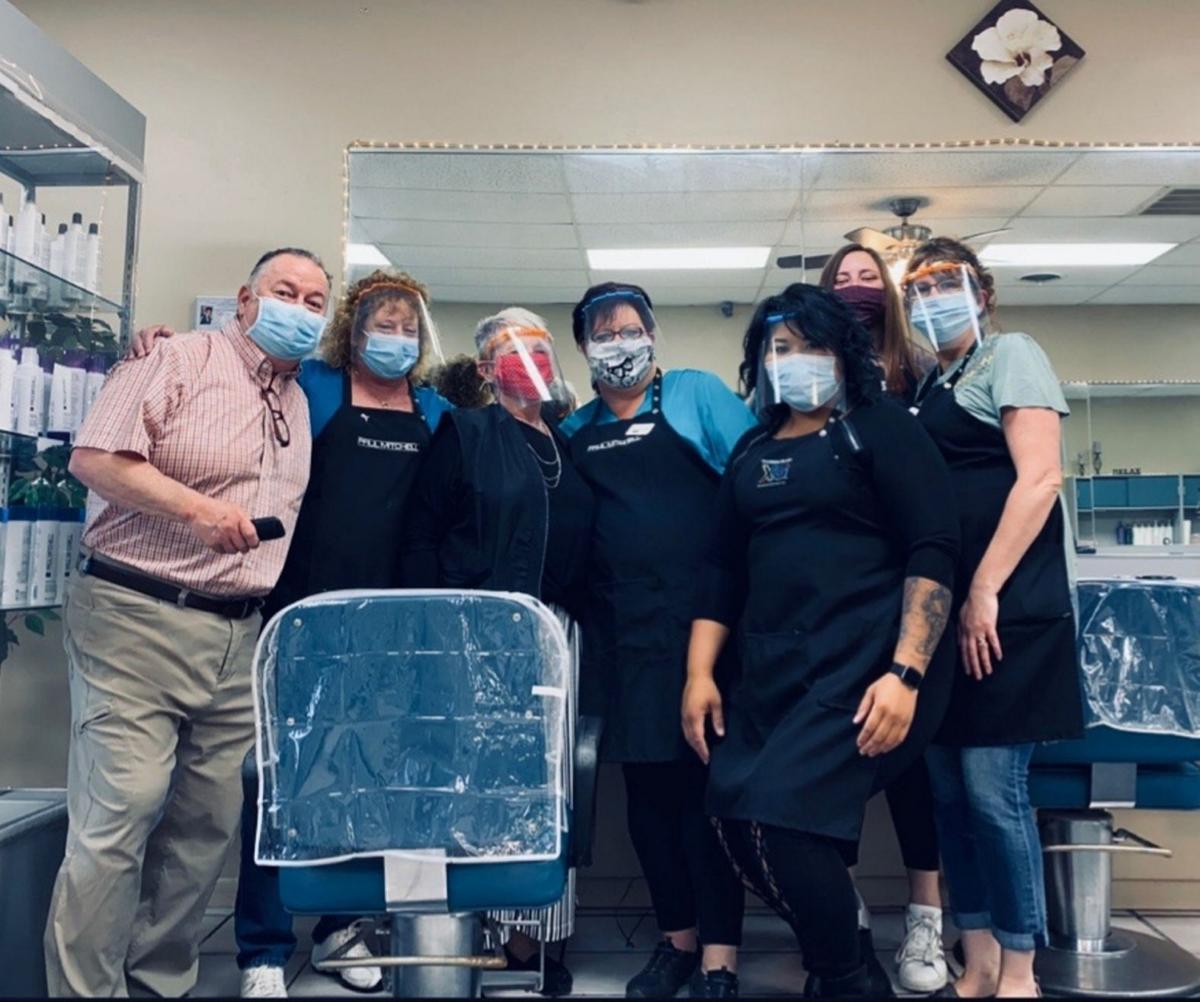 Photo courtesy of Steve’s StylesSteve’s Styles owner Steve Barnett and members of his staff pose for a quick photo in their new protective gear ahead of Saturday’s opening. The salon, at 585 E. Main St., was permitted to begin offering cuts, colors and styles at limited capacity after Friday’s Phase 2 announcement. 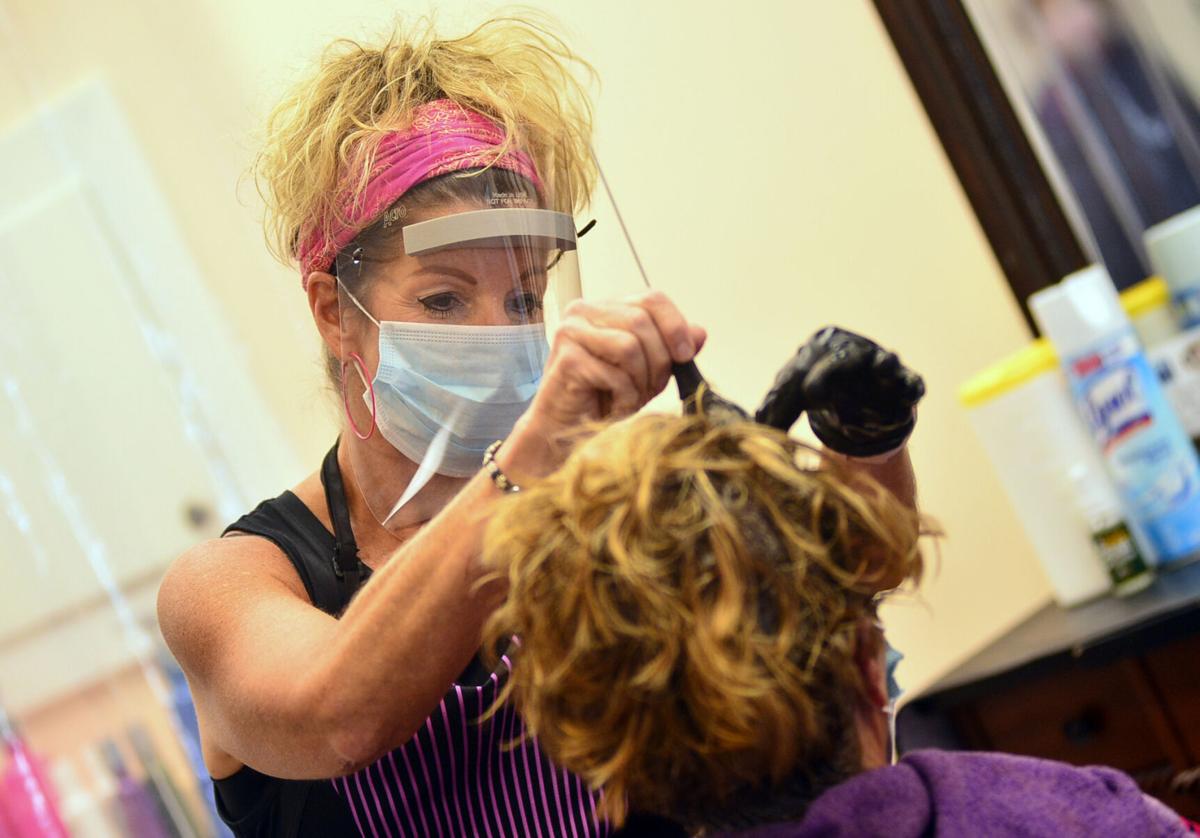 Mark Gutman/Daily News Lori Steinbrenner works with a customer on Monday afternoon at her salon Personal Preference in Le Roy. 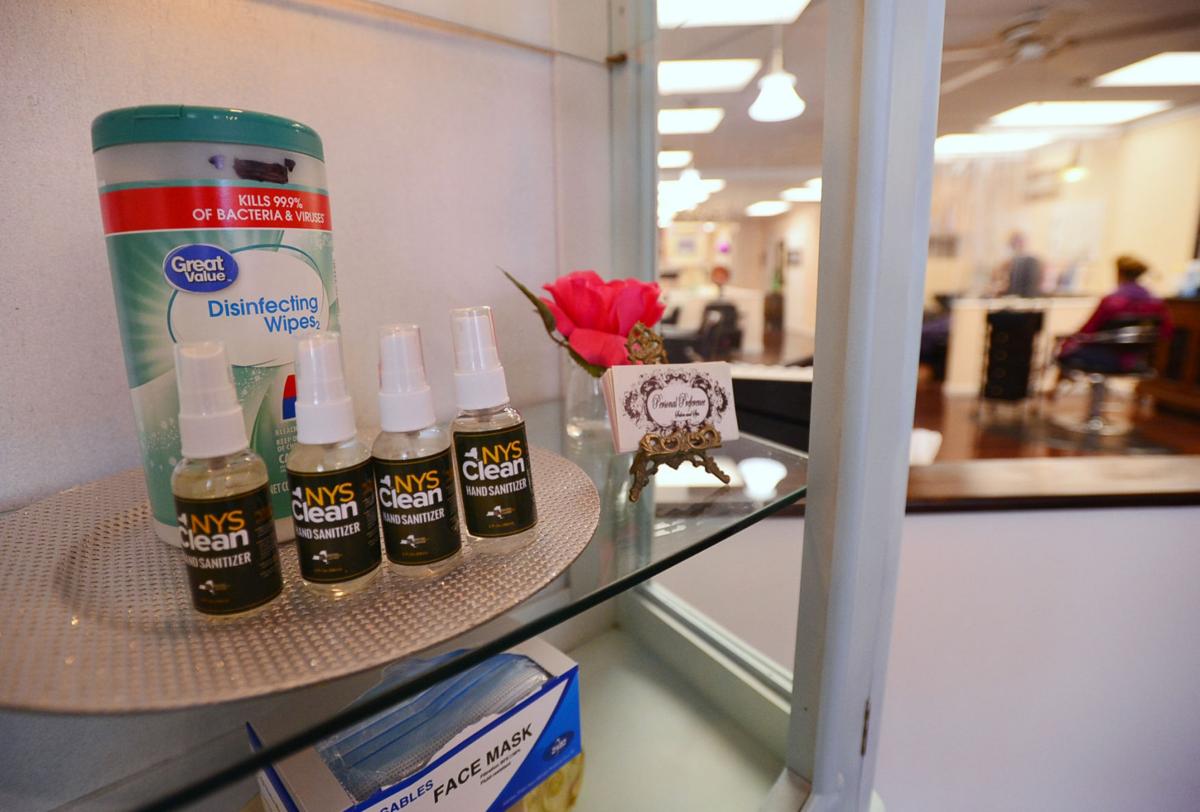 Mark Gutman/Daily NewsHand sanitizer and wipes are available for customers at Personal Preference in Le Roy.

Photo courtesy of Steve’s StylesSteve’s Styles owner Steve Barnett and members of his staff pose for a quick photo in their new protective gear ahead of Saturday’s opening. The salon, at 585 E. Main St., was permitted to begin offering cuts, colors and styles at limited capacity after Friday’s Phase 2 announcement.

Mark Gutman/Daily News Lori Steinbrenner works with a customer on Monday afternoon at her salon Personal Preference in Le Roy.

Mark Gutman/Daily NewsHand sanitizer and wipes are available for customers at Personal Preference in Le Roy.

BATAVIA — Just after 8 a.m. Saturday, a small group of stylists armed with face shields, loads of disinfectant, sanitizer, and, of course, their prized cutters and shears proved ready.

Their nerves were, admittedly, a little tense, but the excitement was no less palpable as they gathered for a quick photo before the opening.

Smiles hidden behind their masks as the shutter clicked once, and then once more after that, the coworkers and old friends prepped themselves for a long day of never really knowing what quite to expect.

But when the doors at Steve’s Styles, 585 East Main St., swung open a mere half hour later and the first customers were ushered in, spaced approximately 8 feet apart in the plastic-covered salon chairs, the stylists breathed a sigh of relief.

Because beyond the shields and masks and sterile environment — one rid of any unnecessary tools or supplies — they were, at last, doing what they did best: cutting hair for a steady stream of clients they’d dearly missed.

“Yes, we’re off and running,” explained salon owner Steve Barnett of Steve’s Styles. “It’s been quite crazy, I know, from the get-go. We had been preparing to open and were ready, but then there was the hesitation about Phase 2. On Friday, he (Gov. Cuomo) makes the sudden announcement we’re able to open. So here we are!”

Another business in Batavia, Philly’s Barber Shop at 625 East Main St., has customers lined up for the next week. Owner Greg Phillips said the barber shop opened Saturday morning

“We developed our plan though all the stipulations. We abided by the guidelines they put out,” he said. “I can only have one person, one client — no waiting area.”

Phillips said people have been waiting for the chance to get in for a cut.

“I cut a guy’s hair Saturday at 10 p.m. People just want to get in and there’s no spots,” he said. “We knew this was coming. People have been waiting.

“We’re back-to-back-to-back all the way through next Tuesday (June 9). “My earliest available appointment is next Wednesday. I’m starting at 7 and pretty much cutting hair until 9 o’clock at night,” he said. “The amount of phone calls we’ve gotten has been completely overwhelming. I’m not surprised, but I didn’t realize how difficult it was going to be. Literally, with every haircut, the phone is ringing.”

At Steve’s Styles, with less than 50 percent of Barnett’s staff on hand, owing to mandates handed down by the state in order to prevent the spread of the deadly COVID-19 virus, and operating on a new appointment-only policy, things proved far from business as usual at the local salon.

Already-strict sanitation procedures enacted by the Barbicide-certified stylists had been revamped and strengthened in preparation for the salon’s “new normal,” where all clients are now met at the door with a smile, a thermometer used to check their temperature, a short list of health-related questions and a healthy dose of hand sanitizer before they’re admitted entry.

Though it’s a new and sometimes tedious process, with all the kinks not yet ironed out, Barnett said, it hasn’t deterred any loyal customers yet.

“Everybody has been very understanding in that regard,” he said. “All of us in the salon business have always taken care to make sure our businesses are clean and safe for customers, but even more so now. We want them to feel safe coming in here, and comfortable – and they’ve told us they do. They’re being patient with our new system ‘til we get it down. Slowly but surely, we’ll all figure it out.”

Under Phase 2 of the state’s re-opening plan, hair salons and barbershops are only able to offer a limited number of services: hair cutting, styling, and coloring.

But given the length of time since most men and women in the region have had their last trim or cut, Barnett is starting with the bare basics.

“For now, just haircuts,” he said. “During these first few weeks, all of us are going to be bombarded with people needing services, so it just makes sense to do this first.”

Steve’s Styles is typically open 8:30 a.m. to 5 p.m. Saturdays, and until 8 p.m. on weekdays. But, under new guidelines, only four or five of the 11 existing styling stations will be available at any given appointment time — so anyone hoping to get a cut next week should plan on scheduling early.

“The response from our customers has at this point just been absolutely overwhelming,” Barnett said. “They just keep saying they’re so happy to see us back. There are so many good, friendly faces and people wishing us so much well-being. And we say, right back at them!”

Neither he nor his staff had heard of any “hair horror stories” that needed fixing — at least not yet — save for a six-year-old who’d tried her luck with a pair of shears during lockdown.

Mostly, their clientele had been old regulars — men and women with hair a lot longer than they were used to, and who were glad to be able to get a cut or trim.

But there were a few new faces — some hopefuls who made the trek from Erie County, where salons remain closed, to test their luck on a walk-in appointment — who had to be turned away.

And so they’d have to try again some other day.

Ask the few dozen patrons lucky enough to secure an appointment, though, and they’d tell you: “It was worth the wait.”

At about 8:30 a.m. Monday, Personal Preference — Salon and Spa owner Lori Steinbrenner arrived to begin her day. The first client was set to walk through the door a half-hour later.

“I’ve got a pretty full day trying to space them out so I can disinfect,” she said. “I need a good couple of minutes. You have to wipe your chair down. You have to wait for it to dry.”

When clients came in, Steinbrenner was at the door to greet them with hand sanitizer.

“I have a few questions to ask them to make sure they haven’t had a temperature and make sure they’re feeling well,” she said. “They are very healthy and very eager to get their hair done.”

The salon owner said she had an assist Monday from Assemblyman Steve Hawley and the Genesee County Office of Emergency Management (OEM), She said the OEM delivered personal protective equipment (PPE) and hand sanitizer, paid for by Hawley.

“I went right out and greeted him at his truck and he filled my arms with goodies,” Steinbrenner said, referring to the OEM staff member who delivered the items. There are four hairdressers — Steinbrenner and three who are not employees, but who rent space there.

“We’re open as late as 8 at night, open as early as 8 in the morning (during the week) ... I would say 10-2 on Saturday. It’s really different every day depending on my appointments and the girls’ appointments,” Steinbrenner said.