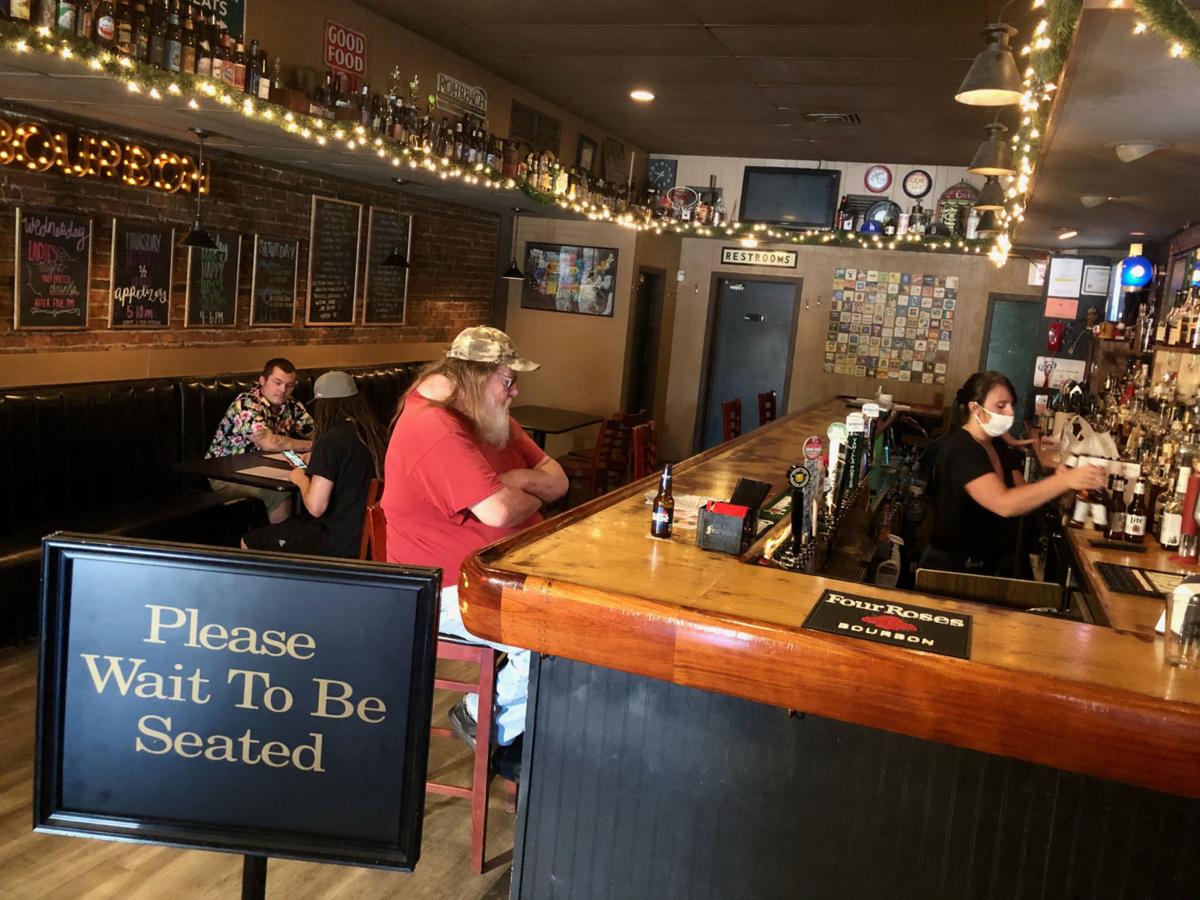 Alex Brasky/Daily News File Photo Patrons are seen inside Bourbon and Burger on June 12, the day that New York State entered Phase Three of its four-phase reopening plan. The day marked the first time restaurants were able to serve patrons inside the business since March. 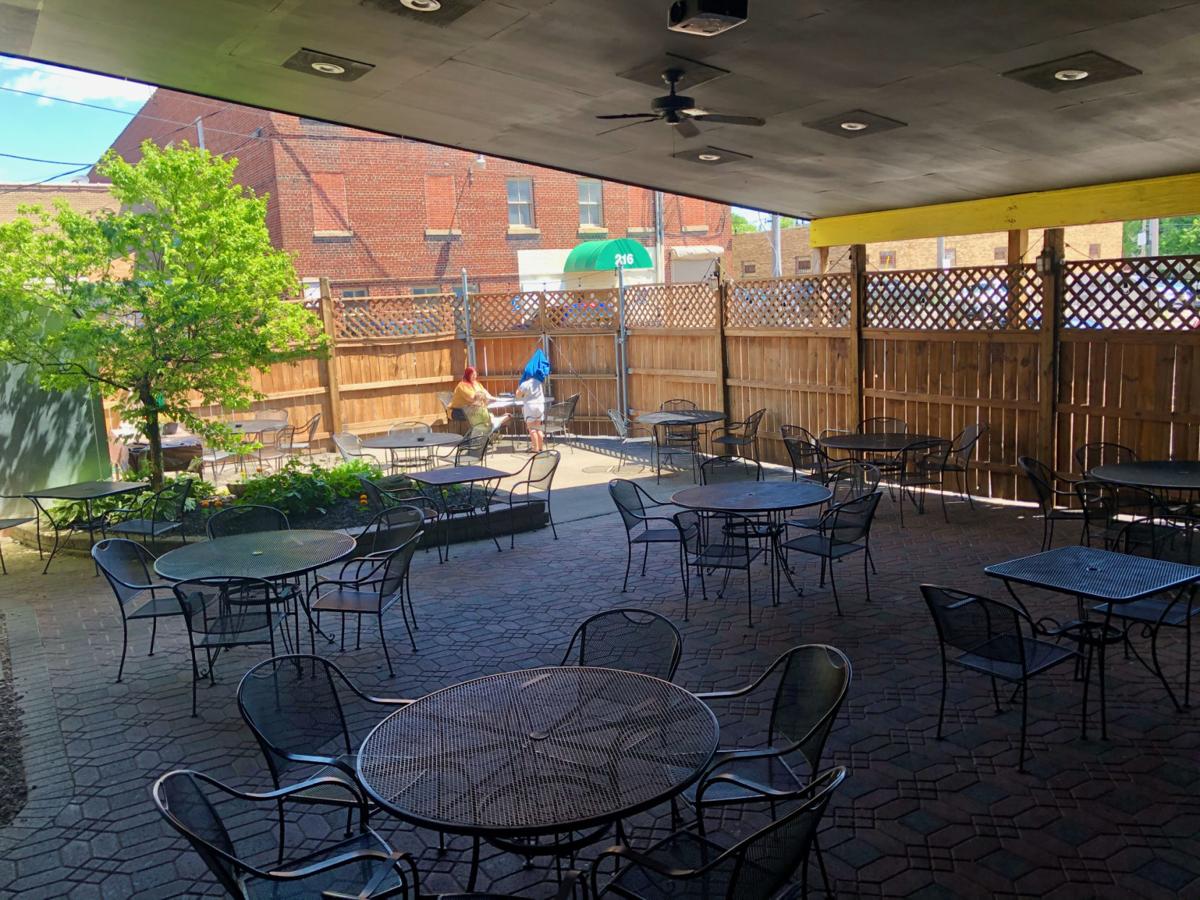 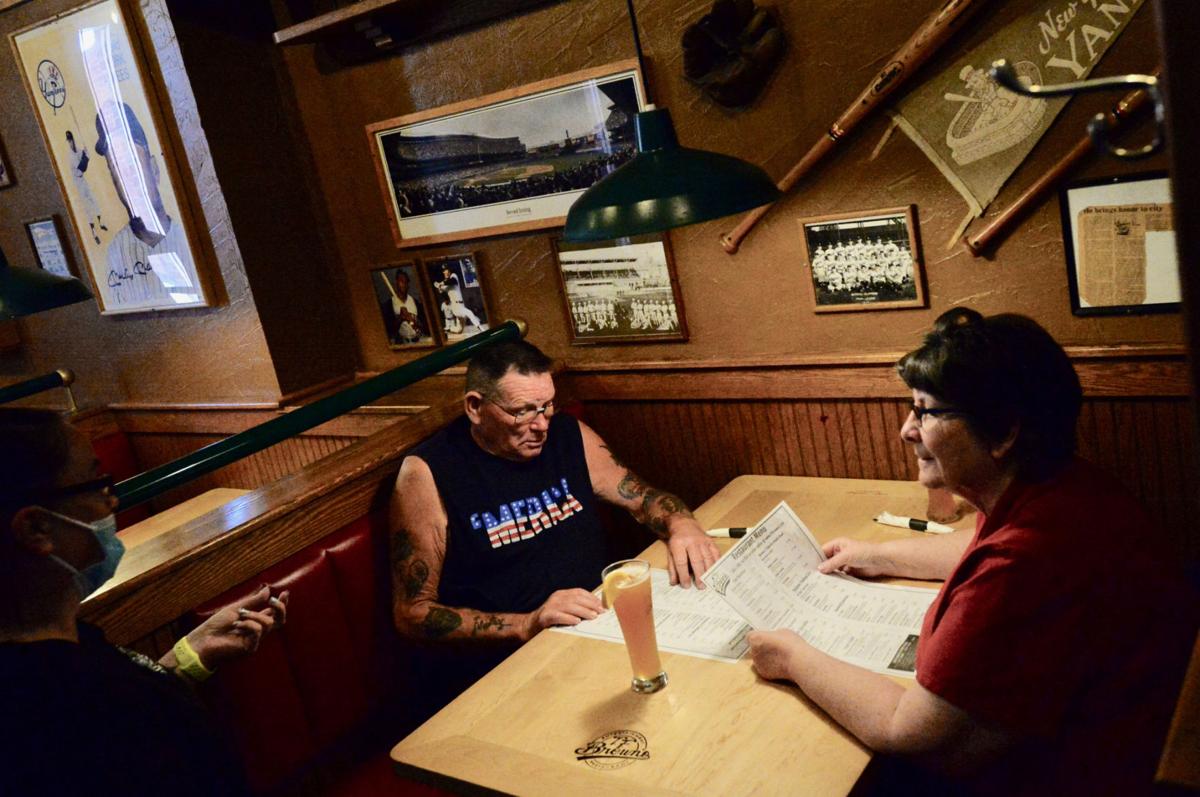 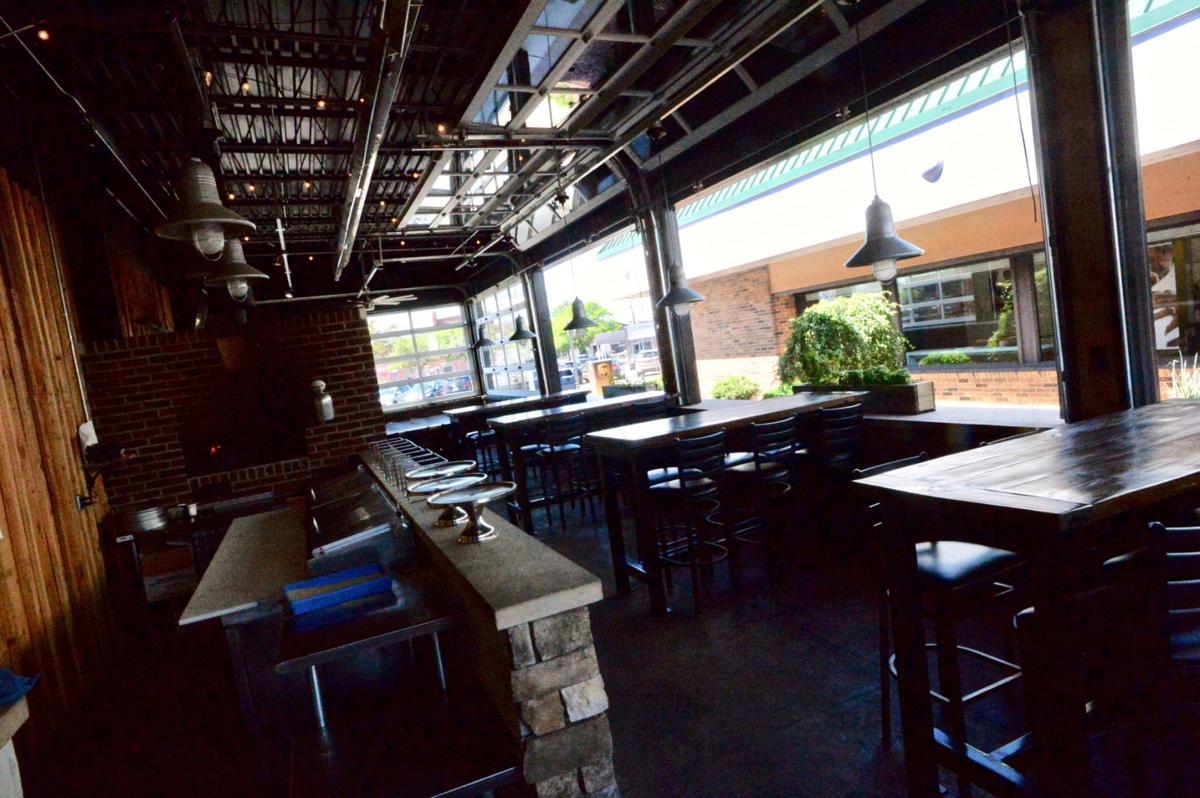 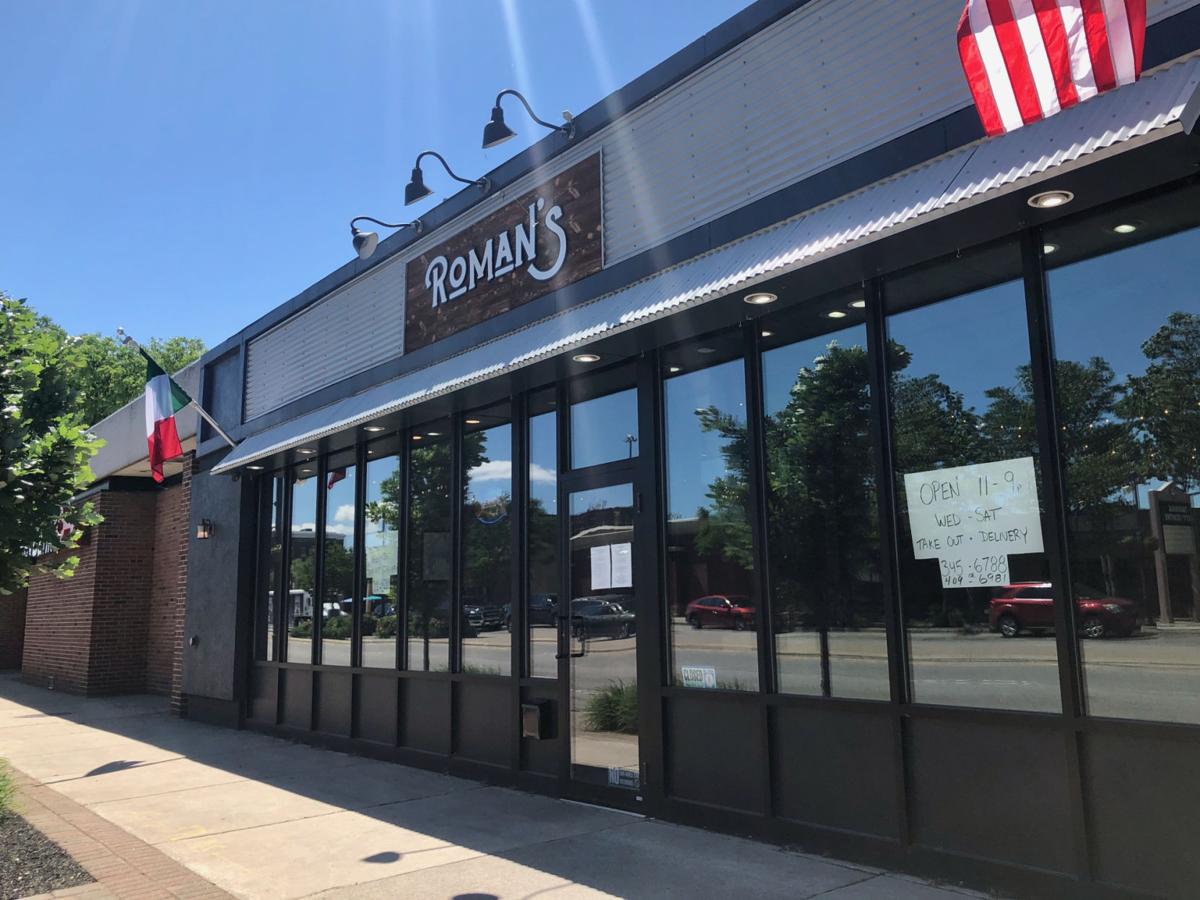 ALEX BRASKY/DAILY NEWSRoman’s, which originally opened in March, is ready to go again. 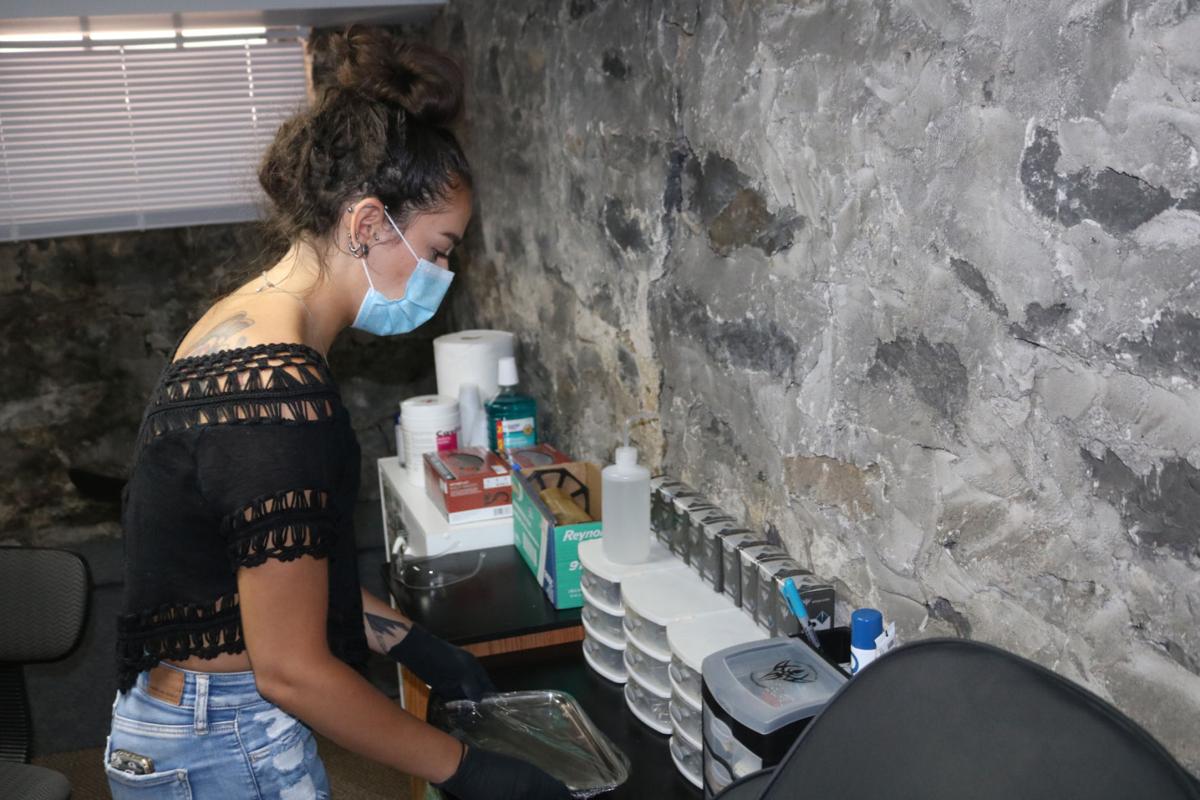 BRIAN QUINN/DAILY NEWSJessie Abrams of High Voltage & Piercing in Batavia gets her work station ready for the next customer.

Alex Brasky/Daily News File Photo Patrons are seen inside Bourbon and Burger on June 12, the day that New York State entered Phase Three of its four-phase reopening plan. The day marked the first time restaurants were able to serve patrons inside the business since March.

ALEX BRASKY/DAILY NEWSRoman’s, which originally opened in March, is ready to go again.

BRIAN QUINN/DAILY NEWSJessie Abrams of High Voltage & Piercing in Batavia gets her work station ready for the next customer.

BATAVIA — There was a couple eating lunch at a table and a man siting at the bar Friday morning at Bourbon & Burger Co. on Jackson Street — the first time people have been allowed to do that in months.

Bourbon & Burger owner Derek Geib, who also has The Coffee Press right next door and Roman’s Italian restaurant on West Main Street, and other restaurant owners in the Finger Lakes region were allowed to reopen their dining rooms Friday in Phase 3 of New York Forward.

Asked about the rules and what people should expect if they stop in for a meal, Geib said, “What I know is that tables have to be 6 feet apart, All patrons have to have masks until they’re seated. All of the employees will be wearing masks at all times.”

The restaurant continued to serve takeout and curbside pickup orders after Gov. Andrew Cuomo’s mid-March executive order prohibited restaurants and bars from serving food and beverages on the premises. Now that dining rooms have been allowed to reopen at 50 percent of capacity, there are about 25 tables set up in Bourbon & Burger. Geib said he doesn’t want to kick anyone out, but the best scenario is for customers to call ahead and the restaurant will get them in. The number for Bourbon & Burger is (585) 219-4242.

The Phase 3 guidelines for Bourbon & Burger, Roman’s and any other restaurant statewide are available online at forwardny.gov by clicking the “View summary guidelines” link, it says that in Phase 3, restaurants and food service establishments may open indoor spaces if they follow several guidelines, including:

n Separating indoor and outdoor tables by a minimum of 6 feet. When that’s not feasible, they must put up physical barriers between tables. Barriers must be at least 5 feet high and not block emergency and/or fire exits;

n Requiring patrons to wear face coverings at all times, except while seated, provided that they are over the age of 2 and can medically tolerate the covering;

n Requiring employees to wear face coverings all the time regardless of physical distance;

n Requiring people seated at the same table must be members of the same party. They may be from different households), with a maximum of 10 people per table. Seating in bar areas and communal tables is only permitted if at least 6 feet can be maintained between parties.

“I would say the biggest challenge is the lack of guidance from the government,” Geib said, adding the restaurant has been doing everything it can based on the information received. He said he found out at 3 p.m. Thursday that he could reopen the restaurant.

Geib said not all customers coming in will abide by the guidelines that have been put out.

“I think the majority of people will do what they can to abide by the rules, but there will always be those few ...” he said.

Asked about Roman’s, Geib said the patio there has seating for 60 people, following the guidelines. Restaurants had been allowed to offer outdoor dining as part of Phase 2 of the reopening.

AT T.F. BROWN’S on East Main Street, owner Rick Mancuso said, “Everything is put together the way that we want it and according to the guidelines we’ve received (from) the CDC and New York state. There’s a lot of different things. I’d spend the next half hour if I tried to explain it all ...”

On its Facebook page Friday, T.F. Brown’s said, “We are excited to finally be opening indoor dining TODAY!! There will be guidelines set in place for the safety of our staff and customers. Curbside pickup and Delivery will also be available.”

THE EAT WELL GRILL, originally opened last year by John and Jill Kratz and located at FreshLAB, 109 Main St., was getting its operation underway again Friday.

As far as the most difficult guideline, John Kratz said, “I think it’s the distancing part, even though we’ve been doing it for awhile.”

“I just want to say how grateful I am (to the community),” he said. “We’re a new business — less than a year.”

Having lunch at Eat Well Grill Friday, while things were pretty quiet, were Steve and Theresa Lippold of Bergen.

“I saw on social media that they were open, so we decided to come to check it out,” Theresa Lippold said. “This is so much better than just takeout.”

She said they were looking forward to the restaurant reopening and staying open, so they could enjoy it more.

Steve Lippold said, “The food is delicious. I was happy to come in. Plus, we’re eating out of dishes, instead of little (takeout) containers. I’m a celiac, which means I can’t have any wheat, barley or rye, and that seems to be in a lot of foods.”

To reach Eat Well Grill, call (585) 446-3033. More information about the restaurant may be found on its Facebook page.

MAIN ST. PIZZA COMPANY owner Vic Marchese said the restaurant reduced its dining-room capacity from 150 people to 75. There is still a full Italian menu, he said.

The pizza-and-wings menu is not quite a full menu right now.

“I did cut some of the pizza menu, because I’m a little short-staffed over there,” he said of the pizza-and-wings side of the business. “I’ve always had about 32 flavors of wings. I cut that down to 15.

“Eventually, the business will come back to where it was, but that will take time,” Marchese said.

The Main St. Pizza owner said he also hopes more people who worked there before the start of the COVID-19 pandemic may be brought back.

“I cut about 35 people out of here when COVID-19 hit,” he said. “I’m leaving it up to one of my managers to bring them back as they were needed,” he said.

“We’ve had some traffic. We’ve got a lot of preorders. I’ve got people calling, texting all day, really excited to come out to eat and we’re excited to have them,” he said.

Ball said the restaurant is working on getting some outdoor seating.

“We have it out on our Facebook page, all our social media, what’s required of customers, that they have to come in with their masks on, they sit and dine,” he said. “We just want everybody to have confidence, come back out to eat. We’ve been adapting. The crew here has been fantastic.”

AT THE BLACK NORTH INN in Kent, owners Kristin Rowell and Alana Piccirilli said the restaurant opens at noon today. The hours will be 3 to 9 p.m. Monday through Wednesday and noon to 9 p.m. Thursday through Saturday.

“Our business has definitely been hindered by the COVID-19 outbreak. We’re excited to see all our guests be welcomed back ... We’ve definitely made a lot of friends over the years and we’ve missed them,” she said.

“We’re ready, we’ve been cleaning, we’ve had everything socially distanced, spread apart,” she said. “After just doing takeout, we finally can have our employees back working with us. We have six tables outside. We’re providing table service out there for those are for waiting or for takeout. There is not server out there. They can eat their takeouts and have a to-go drink out there.”

Rowell said with at 50 percent capacity, the restaurant can seat about 60 people, combined, between its Sunset Room and the main building.

Normally during the height of its season, the Black North employees about 35 people, Rowell said.

“When we open at noon, there will probably be 12 of us. We’re in the process of hiring,” she said.

“I think that this whole reopening phase is far more stressful than the complete shutdown (in March) and the to-go aspect of it. We’ve been working on this process for about a month now,” she said of getting ready to reopen. Rowell said the restaurant received some guidelines on Tuesday.

“It was more advanced than the Phase 2 guidance that was sent out. We’re in the same boat as everybody else in this Phase 3 as far as getting information in a timely fashion,” she said.

“That’s why our hours are what they’re going to be for a short period of time until we get people up to speed and trained,” she said.

She said the restaurant puts guest and employee safety first.

“All the guidelines the state has put out will be followed here. We’d like if people could be mindful of all the restrictions the service industry is going through right now and be respectful of it,” Rowell said.

Piccirilli added, “We’re just hoping everybody is kind to us and kind to each other.”

Rowell and Piccirilli said walk-ins will be accepted, but Rowell said they would prefer that customers call (585) 682-4441 to make reservations.

“With limited seating, reservations are probably the smart way to go,” she said.

Personal-care businesses such as tattoo shops and nail salons were allowed to reopen under Phase 3.

AT HIGH VOLTAGE TATTOO & PIERCING, on West Main Street, owner Mark Fanara and body piercer and tattoo artist were back at work.

Fanara, who also does tattoos and piercings, said High Voltage opened up around noon Friday.

“I came down yesterday (Thursday). made sure all the chairs were spaced 6 feet apart and everybody had masks and hand sanitizer at their work stations and got the log books ready for the three logs we have to keep,” he said.

“We’ve had one client come in for a piercing. We’ve had several phone calls, lots of message and I’ve been scheduling a lot of appointments,” Fanara said. “I get messages almost every day on Facebook, asking if we’ve heard when we can open up. ‘Can you sneak me in for a piercing and a small tattoo?’ I’m always like, ‘You’ve got to wait. I can’t sneak anybody in right now.’ Most people have been waiting patiently to get in here and get some new tattoos, piercings.”

The shop’s hours right now are noon to 7 p.m. Monday and noon to 8 p.m. Thursday through Saturday.