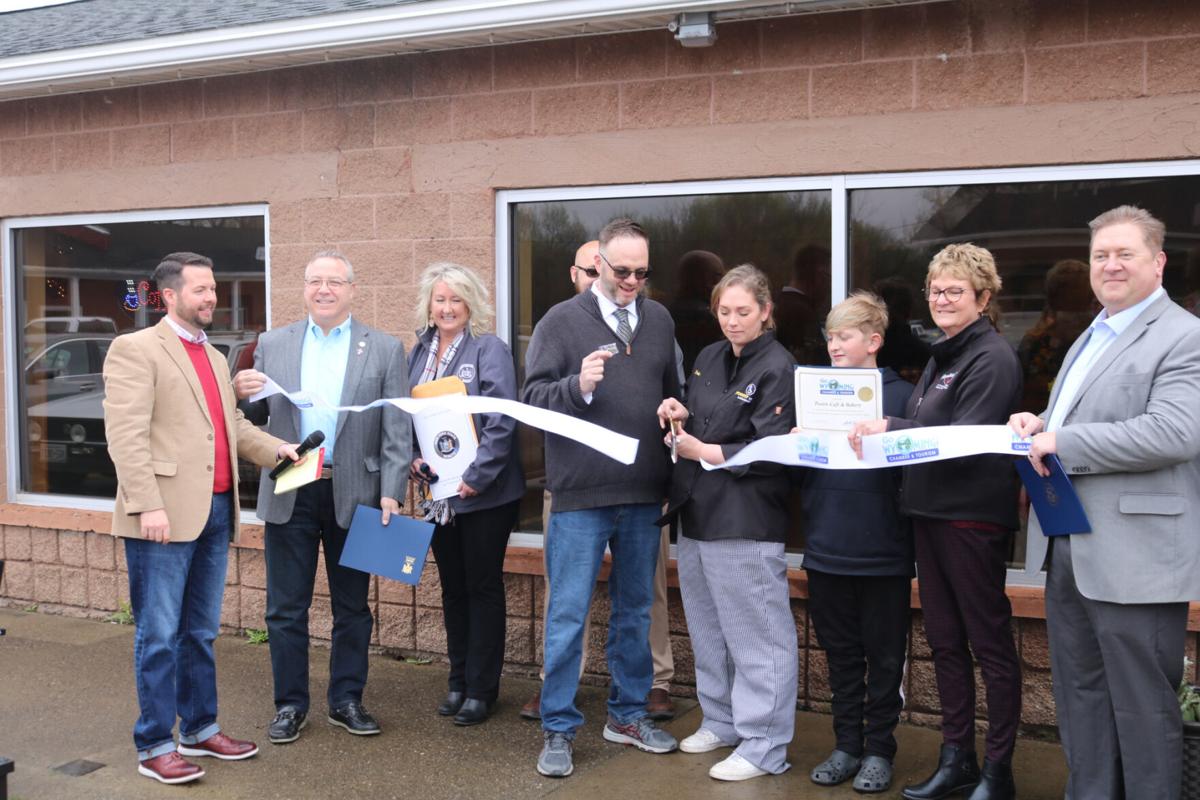 Erica Szemplenski cuts a ribbon Friday morning at Positiv Cafe and Bakery in Attica, which she and her husband, Erik, own. 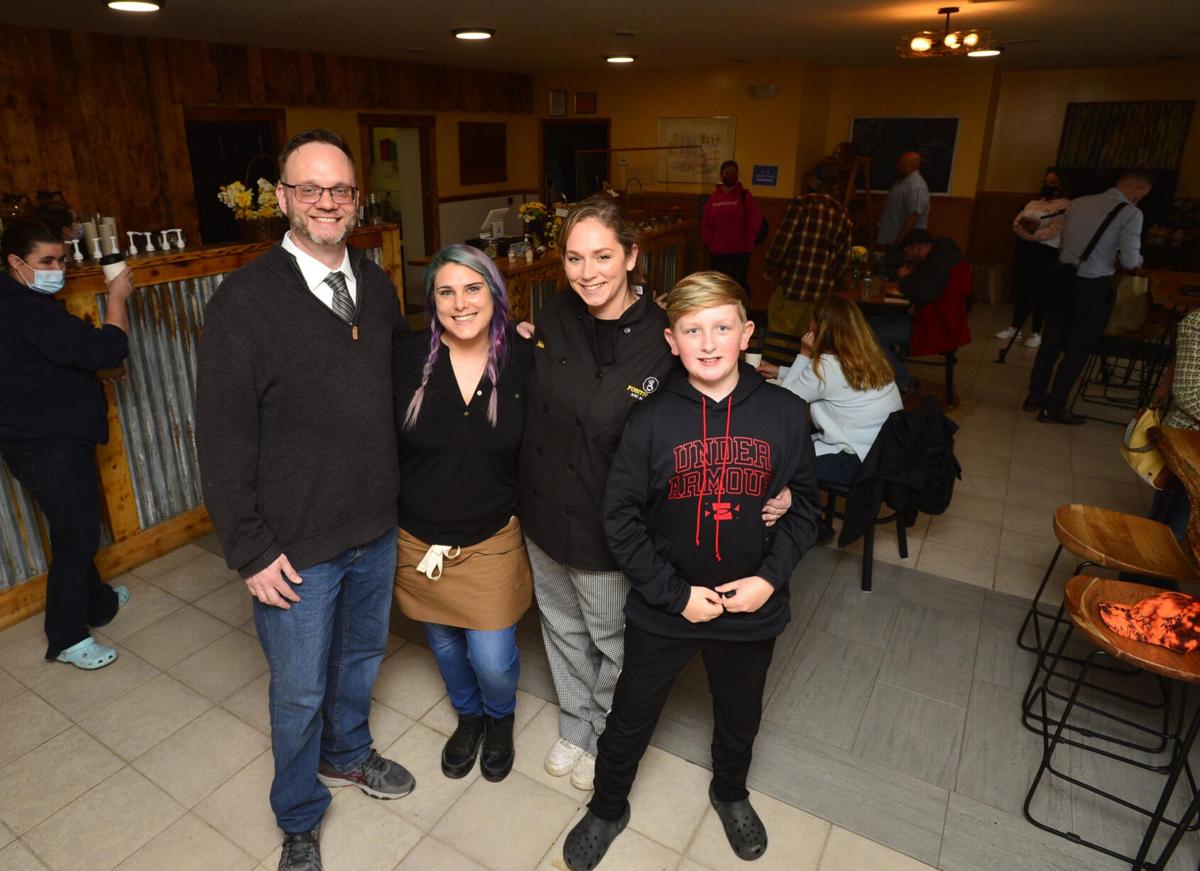 Erik and Erica Szemplenski along with cousin, Amber Beck, second from left, and son, Ricky Blatt, on the right. 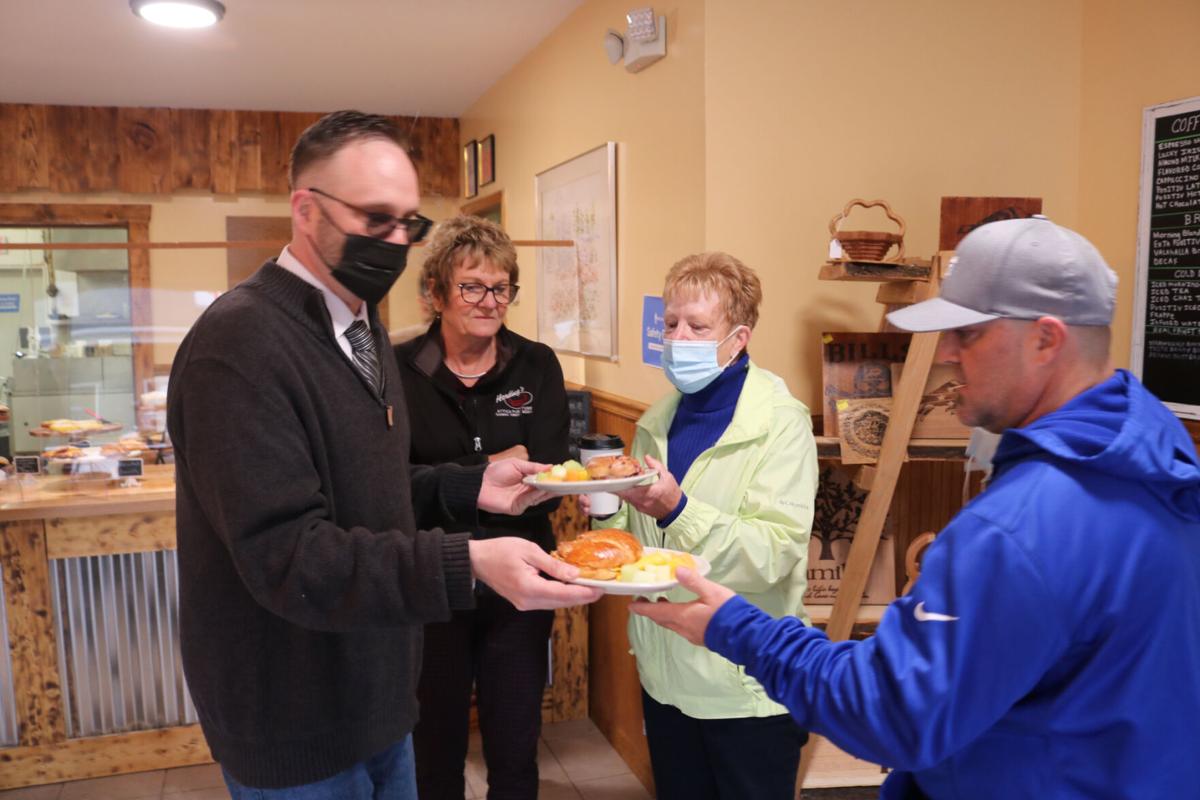 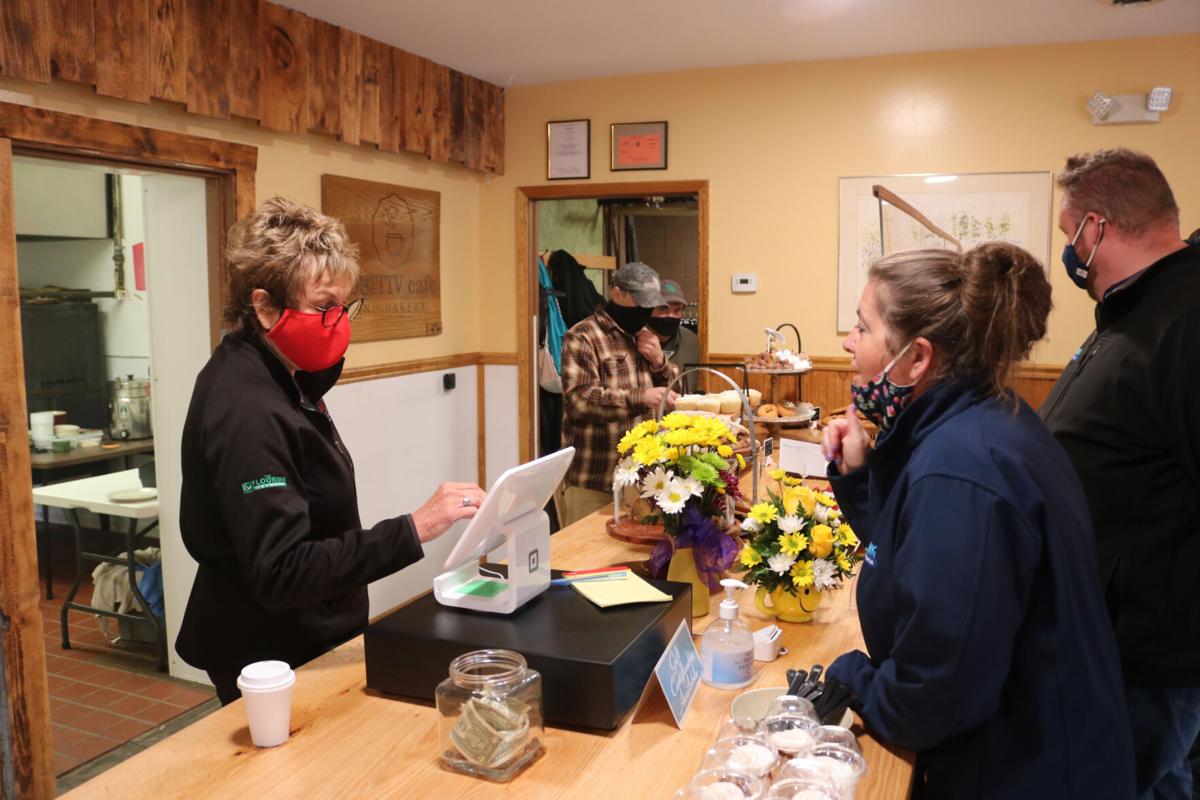 Erica Szemplenski cuts a ribbon Friday morning at Positiv Cafe and Bakery in Attica, which she and her husband, Erik, own.

Erik and Erica Szemplenski along with cousin, Amber Beck, second from left, and son, Ricky Blatt, on the right.

ATTICA — Erik and Erica Szemplenski didn’t have to wait long for a crowd to arrive Friday morning.

Family and friends, local officials, and state and federal representatives or their staff showed up at the Szemplenskis’ new business, the Positiv Cafe and Bakery, for the its grand opening.

The eatery at 121 Prospect St. was celebrating about 2 1/2 weeks after its soft opening.

“February, we came in and started cleaning. It took two months of cleaning and April 12 was when we had our soft opening for our first day,” Erik Szemplenski said.

The husband and wife said getting ready to open was a learning curve, partly due to the number of customers coming through the doors.

“Just figuring out the amounts of food and baked goods we were going to go through,” Erica Szemplenski said. “We underestimated the amount of traffic that was going to come through.”

In the first 12 days Positiv was open, its owners said, they served about 400 customers. Adding in repeat customers, they said, there were about 120 people a day.

“Our lunch has really exploded. We had a lot more people come for lunch than we thought,” Erik said.

People came in to congratulate the Szemplenskis and wish them well. At least one person dropped off flowers.

“The biggest thing when we started, we wanted to have a place for the community to gather that’s not a bar or a fried food place,” Erik Szemplenski said.

Two who made their way to Positiv for the first time Friday were Chris Romesser and his mother, Janet Romesser. Chris and Erik grew up together and both attended Attica High School, with Chris graduating in 1993 and Erik in 1994.

“I used to feed Erik breakfast and lunch. They lived around the corner, so the kids were together all the time,” Janet Romesser said. Chris and Janet Romesser tried a breakfast sandwich and a bagel, respectively.

“I just knew it was a coffee place,” he said.

Janet said, “I just talked to somebody who said they have great salad.”

The crowd soon moved outside for the ribbon cutting.

“Thank you everybody for coming out. We really appreciate the support, seeing all your great faces,” Erik Szemplenski told the gathering, reiterating the idea of Positiv as a community gathering place.

“We’ve had a tough couple of years and we wanted to bring this beautiful community of Attica together, so we created this,” he said. “This has been my wife’s dream, to be able to own her own shop, and we’ve got the pastries. We’ve got the breakfast sandwiches and the lunches.”

Erica Szemplenski thanked the community for its support.

“This is just a dream come true and we really just thank everyone for coming,” she said.

“I couldn’t thank him enough. He’s done so much for our community and this little village of Attica,” Erik Szemplenski said. “My wife and I have both lived here our entire lives. We feel to be able to do this business for all of you is a dream come true.”

Assemblyman David DiPietro, R-East Aurora, attended the grand opening and said a few words before the ribbon was cut.

“I just want to say,this is awesome. Great to see you guys put this together,” he said to the Szemplenskis.

“We’re looking forward to having breakfast,” he added as the crowd laughed.

Eileen Hopkins, director, district office operations for Sen. Patrick Gallivan, R-Elma, congratulated the Positiv owners and presented them with a proclamation after the ceremony.

Montford was handed the microphone next and said, “Best wishes to both of you guys. I couldn’t be happier, more proud of you guys and, on behalf of the village, we just thank you for bringing Positiv to our village.”

Mitchell Martin, director of community relations for Congressman Chris Jacobs, presented Erik and Erica with a commendation on behalf of Jacobs.

The decor of Positiv Cafe and Bakery included a counter/bar made by Crafty Trees of Wyoming, N.Y., owned by Jeffrey Armitage and Jim Bristow. The wooden counter was made from a 150-year-old oak tree, Armitage said. He said it took two to three years to make the wood from the tree into a counter — a process that included drying, cutting and processing. Also in the cafe, Crafty Trees had a display of the products it offers.

“We just came down here and he’s one of my best friends,” Armitage said of Erik Szemplenski. “He said he needed a bar and I said, ‘We’ll build you a bar.’”

Wyoming County Chamber of Commerce President & CEO Scott Gardner looked at the sign on top of the building and noted that there is no “e” in “Positiv.”

“You get your energy inside,” Erik Szemplenskis responded as some in the crowd laughed.

“I’m very happy to be here to celebrate this with you and a whole bunch of people that came out,” Gardner said to the Szemplenskis.

“You had friends and family there. It’s a business where they sell a variety of mattresses and they do it by appointments,” Gardner said. “The name of the business is pretty descriptive of the way they operate. He (Dantonio) will meet the people there and they can spend time, look at the mattresses and make a selection. They have regular mattress displays up in the store. Then they’ll deliver it.”

“It’s a plants and a farm market. It was one previously and it’s under new ownership. They’re reopening it,” Gardner said. “They’re going to give away a Mother’s Day basket as a promotion for people to come. They’ll have some plants for planting and gardening. They’ll have normal farm market items.”

In general, Gardner said, it was interesting that there were three ribbon-cuttings over a couple of days.

“Typically, as things open up in the springtime, we tend to pick up with the ribbon-cuttings,” he said. “People that might have been waiting to open a new business or move to a new location ... We’re starting to see that those changes are happening. Things are starting to get back to normal. Businesses are starting to open and reopen. It’s good. It’s positive for our area.”