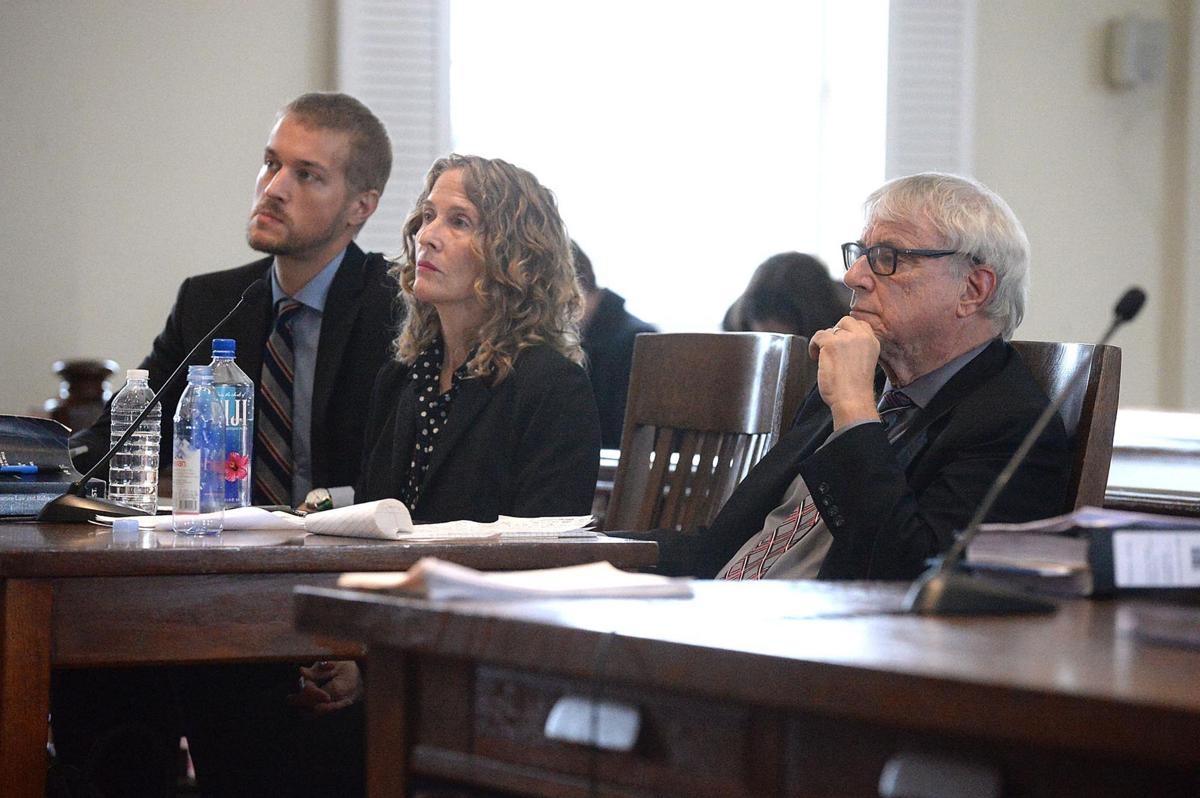 Rocco Laurienzo/Daily News Executive Director Kevin Schneider of the Nonhuman Rights Project, and his attorneys, Elizabeth Stein and Steven Wise, listen during Friday’s hearing in Albion. It was ruled the case belongs in the Bronx. 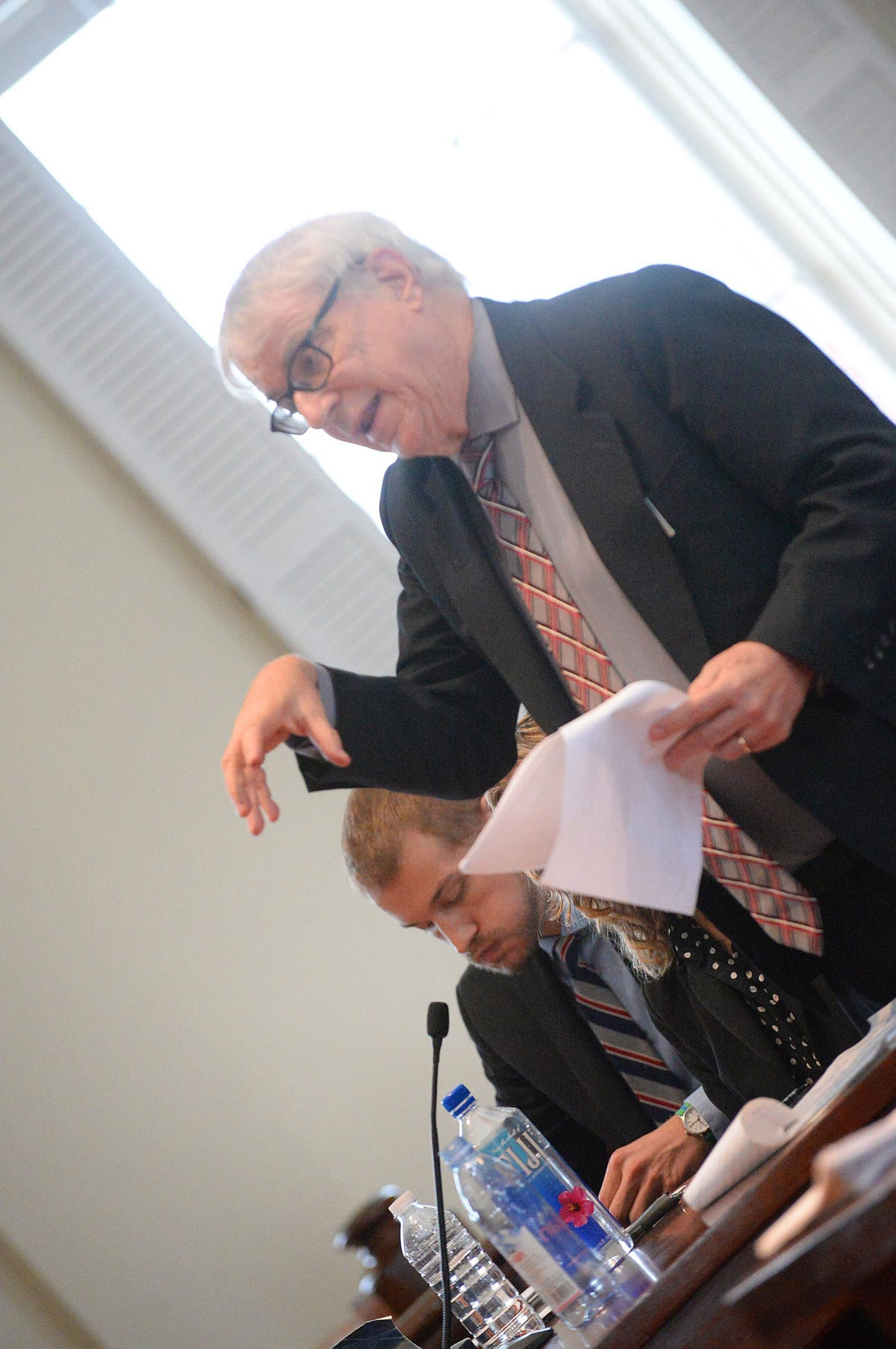 Rocco Laurienzo/Daily News Steven Wise argues on behalf of Happy the elephant during Friday’s hearing. At issue is whether the elephant qualified for a writ of Habeas Corpus. 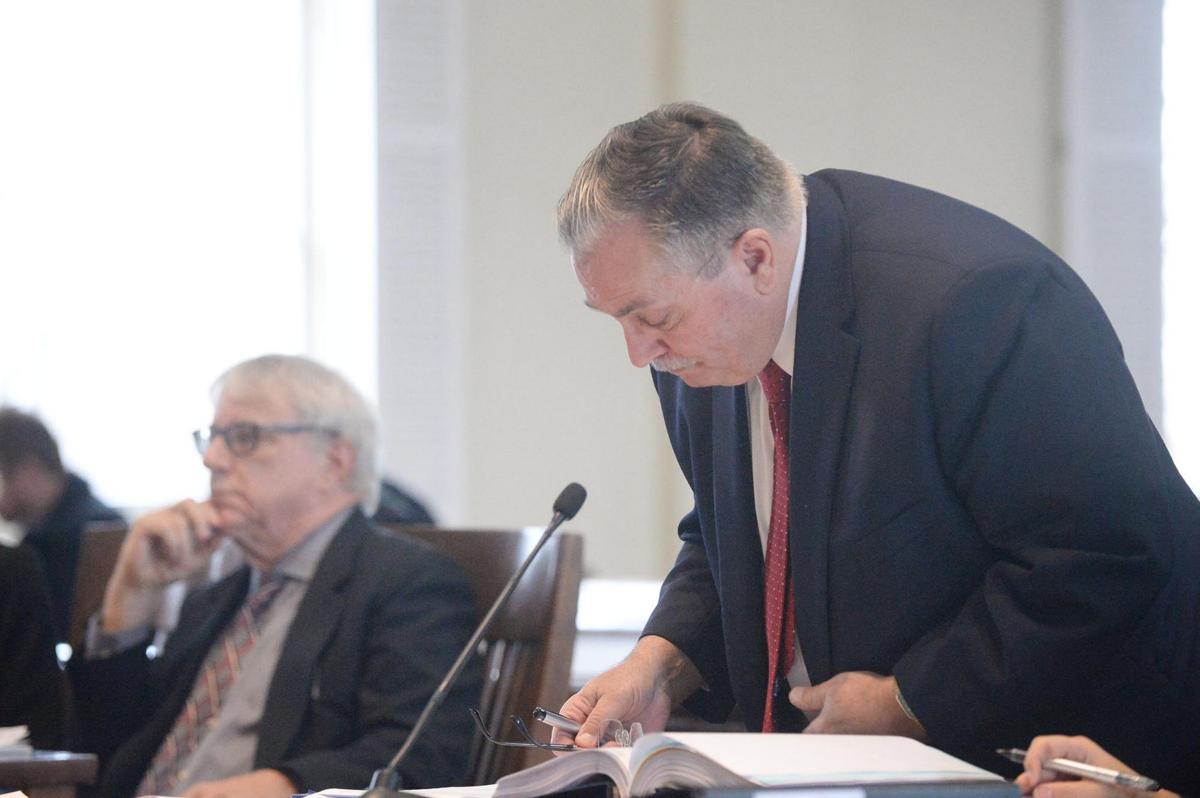 Rocco Laurienzo/Daily News Executive Director Kevin Schneider of the Nonhuman Rights Project, and his attorneys, Elizabeth Stein and Steven Wise, listen during Friday’s hearing in Albion. It was ruled the case belongs in the Bronx.

Rocco Laurienzo/Daily News Steven Wise argues on behalf of Happy the elephant during Friday’s hearing. At issue is whether the elephant qualified for a writ of Habeas Corpus.

ALBION — In a first for Orleans County — and the world — oral arguments for an order to show cause for habeas corpus for Happy the elephant were heard Friday morning in the Albion courthouse.

Happy’s case is the second time in United States legal history in which a habeas corpus has been argued for a non-human animal, and the first time anywhere a case has been argued for an elephant. Steven Wise, Nonhuman Rights Project (NhRP) president, said to the best of his knowledge a habeas corpus has happened two other times across the world; one for an orangutan in Buenos Aires and another time on behalf of a chimpanzee in Mendoza, Argentina.

Happy is a 47-year-old Asian elephant who was born in the wild and imported to the U.S. when she was a baby. In 1977 she was relocated from the Lion Country Safari in Florida to the Bronx Zoo.

For the last 12 years, the zoo has housed Happy in a portion of its 1.15-acre exhibit, separated from elephants Patty and Maxine — who was euthanized at the end of November — who, in 2002, fatally injured Happy’s longtime elephant companion, Grumpy. Happy lives in a cage in a holding facility during the winter.

The Hon. Tracey A. Bannister heard arguments from the Wildlife Conservation Society (WCS) — which operates the Bronx Zoo — and NhRP in what she would describe as the “most unusual case” — a 10-minute argument for their case regarding Happy’s fate and a five-minute rebuttal.

Wise started the argument by explaining the NhRP was seeking a habeas corpus for Happy given the elephant is a person — or a being with a capacity for rights. He said “human” does not equate a “person,” nor is it an issue of biology but of public policy. Wise noted that corporations are considered people, and they aren’t humans, and in the past there were entire groups of humans who weren’t afforded rights — slaves, women, Native Americans — who were granted habeas corpus.

Ken Manning, an attorney for WCS, argued the case was a legislative issue and previous appellate courts had ruled against NhRP, and the latter should be barred from continuing to petition the court. He also asked why the habeas corpus argument was being held in Orleans County.

Manning also asserted NhRP failed to establish Happy was being mistreated or was unhappy in her current situation.

“It doesn’t mater if Happy is happy. The issue is she’s being detained,” Wise rebutted, adding they weren’t attacking the conditions of her confinement, but the issue whether or not she should be confined at all. “Happy couldn’t expect to understand being in a large area with a herd when all she’s known is an acre of land and living in solitude.”

However, in the end, Bannister agreed with WCS, feeling the case should be heard in the Bronx.

“Regardless of the underlying issues, experts will need to testify on both sides,” she said. “Albion is the most inconvenient place to hold an argument. Bronx is a convenient place, and more people find it much easier to get to the Bronx than Albion.”

Bannister also left it to the Bronx judge to make the decision whether to grant Happy habeas corpus, not wanting to put a judge who was an equal level as her in the uncomfortable decision feeling that the judge should act as an appellate court judge.

Before and after the court hearing, NhRP explained to media that Orleans County was chosen to hear Happy’s case for two main reasons — its place in the New York’s Fourth Judicial Department and its rural nature.

Wise explained in New York, each county has its own supreme court and then there are four intermediate appellate courts which funnel into a single court of appeals.

When NhRP was last in the New York First Judicial Department — which covers Manhattan and the Bronx, where the Bronx Zoo is located — the court ruled against the organization, saying a non-human animal, because it was a non-human animal, could never have any legal rights. When the case was brought up to the Court of Appeals, while the court denied it, a judge by the name of Eugene Fahey from the Fourth Judicial Department disagreed, saying that somebody not being a human being was not a sufficient reason to deny the rite of habeas corpus.

“The statue that says where you can file a writ of habeas corpus says you can do it in front of any judge you want in the entire state, so there was no reason we needed to go in front of a judge in the First Department where the Bronx Zoo was,” Wise said, explaining they chose the Fourth Department area because last time they were in front of the court for a chimpanzee named Kiko the ruling was against NhRP. It wasn’t on the grounds Kiko was a person, but to sue for habeas corpus, you have to be able to ask about the detained being released immediately, and NhRP did not ask for an immediate release.

So when NhRP filed in Orleans, the organization asked numerous times for an immediate release.

“We simply chose Orleans court because we believed ... this kind of issue was fairly complex and that a judge in a more rural court might have more time to really think it through rather than in a busy urban court,” he told The Daily News in November, before adding, with a laugh, the justice set them straight — Orleans County Supreme Court is really super busy. “If we had known that, we might have picked some other court because we were looking for a court that was not super busy.”

Wise admitted they chose Orleans County Supreme Court almost randomly as a rural court in the Fourth Department, and he told the judge at the oral hearing, which was held earlier this year, none of the staff had been to Orleans County nor knew where it or Albion was. However, he assured he now knows it is between Niagara Falls and Rochester.

NhRP is already looking into its next steps, trying to decide if it wishes to appeal it, try to argue it in another county or let it be heard in the Bronx. Due to it being a complex legal issue, NhRP needs time to look into all its options.

“The NhRP has chosen to exploit Happy and capitalize on the Bronx Zoo name to advance its failed political agenda. They continue to waste court resources to promote their radical philosophical view of ‘personhood.’ The NhRP’s own filings do not question Happy’s care or our facilities, but seek to have her recognized as an autonomous being and transferred to an elephant sanctuary,” said Jim Breheny, director of the Bronx Zoo and executive vice president of Zoos & Aquarium at the Wildlife Conservation Society, in a press release. “As we work through this process initiated by the NhRP, we are forced to defend ourselves against a group that doesn’t know us or the animal in question, who has absolutely no legal standing, and is demanding to take control over the life and future of an elephant that we have known and cared for over 40 years. We are pleased our motion for change of venue to Bronx County was granted, and we are confident that the courts will continue to do the right thing in this matter.”