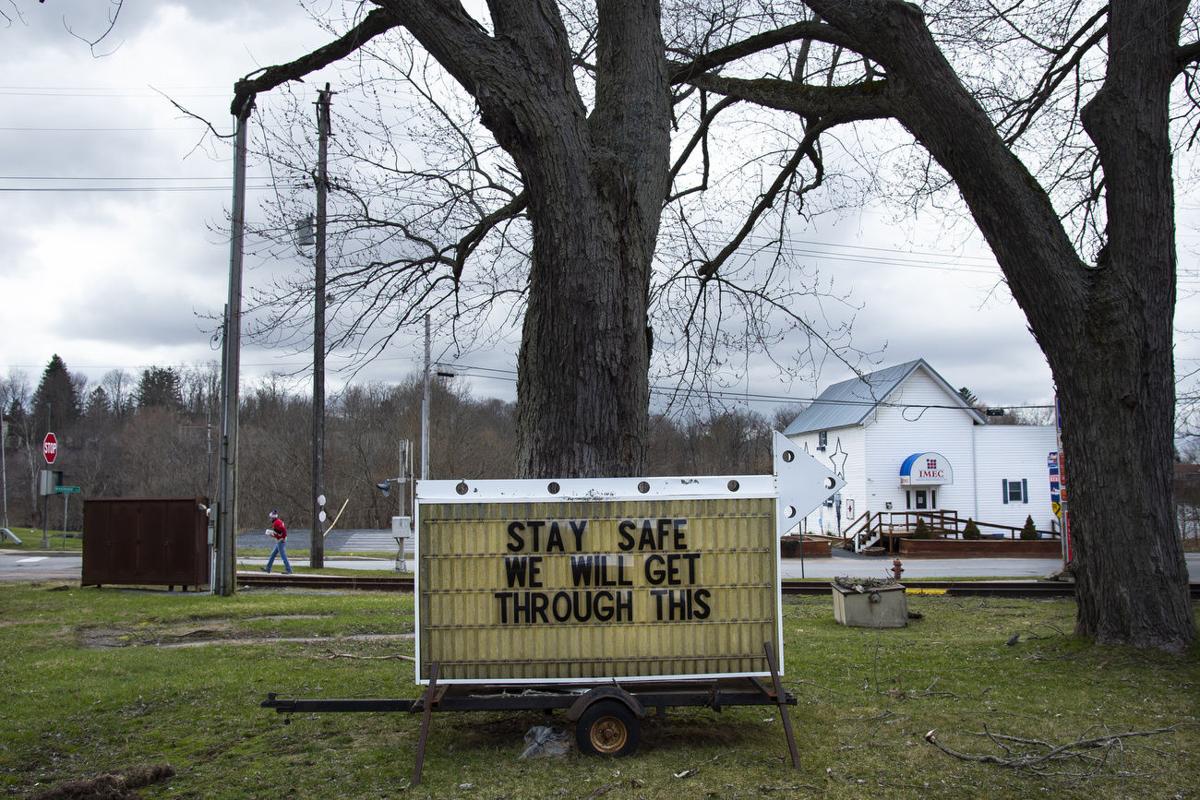 An encouraging message is displayed on a sign outside downtown Carthage. Emil Lippe/Watertown Daily Times 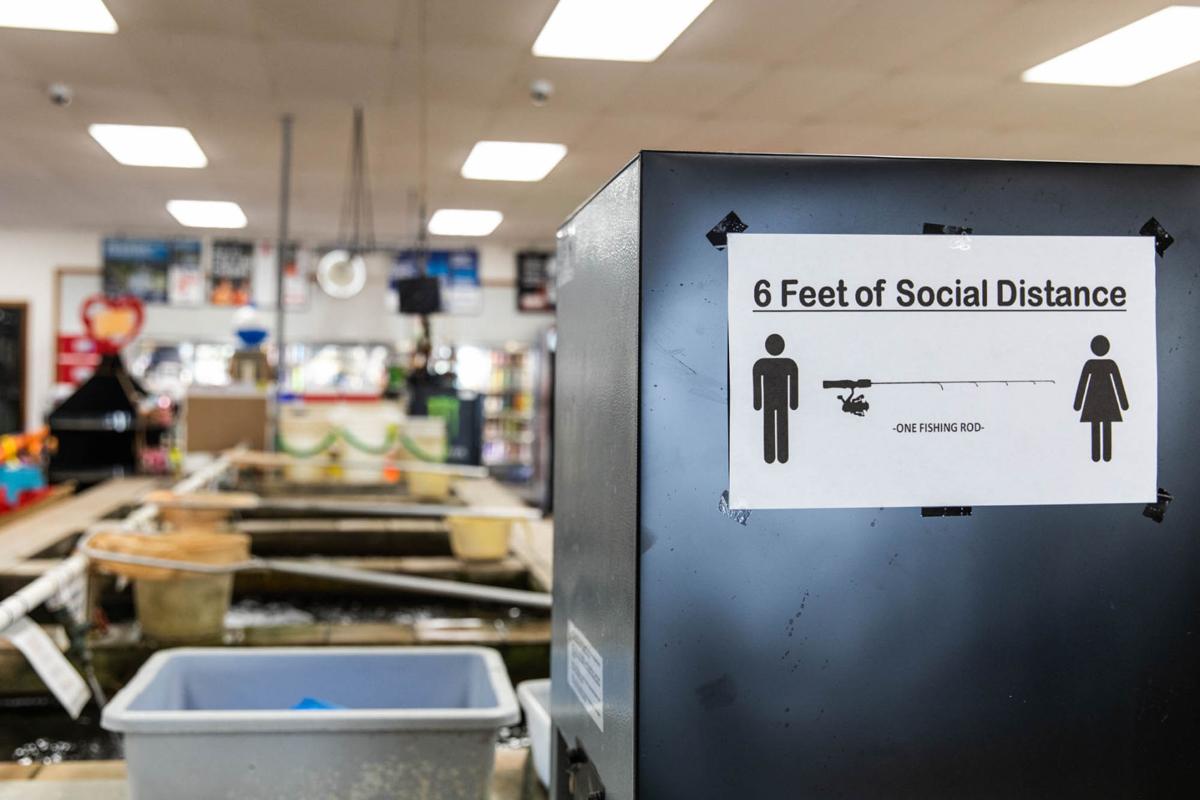 A sign telling people to remain six feet — one fishing rod — apart is taped to a small refrigerator inside the 1000 Islands Bait Store in Alexandria Bay. Sydney Schaefer/Watertown Daily Times 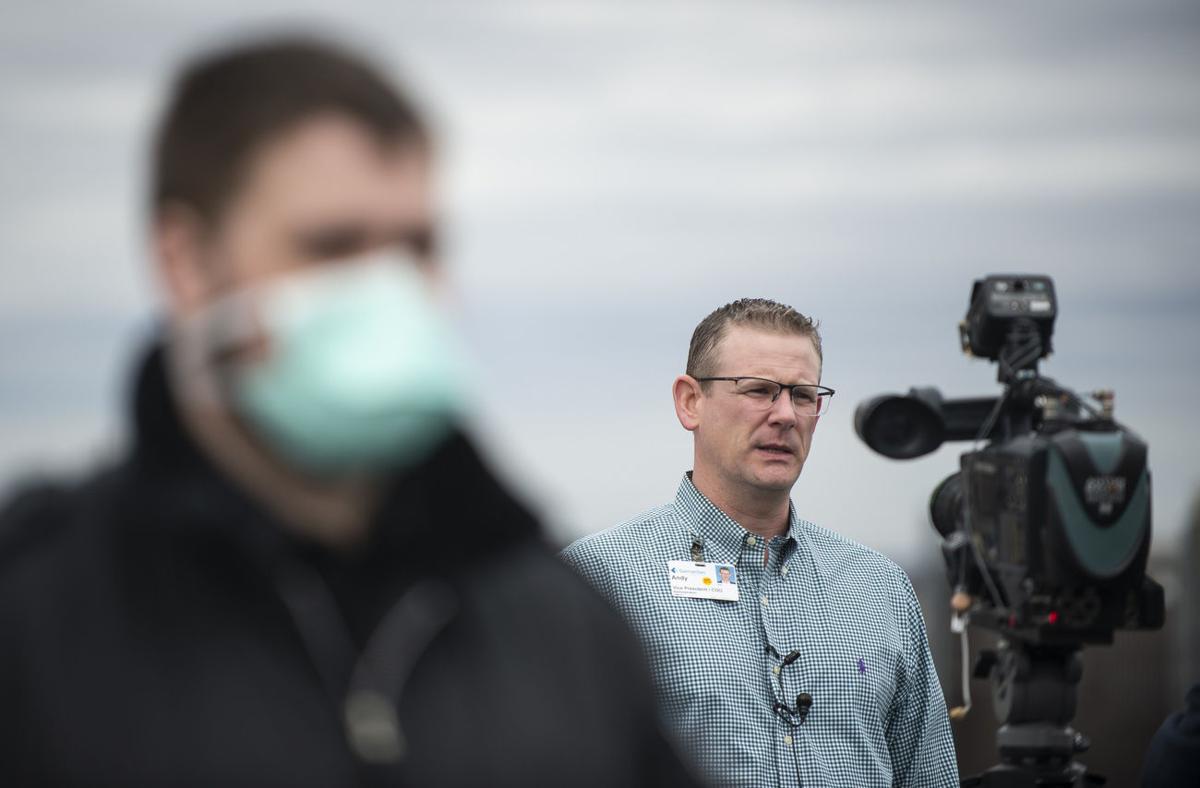 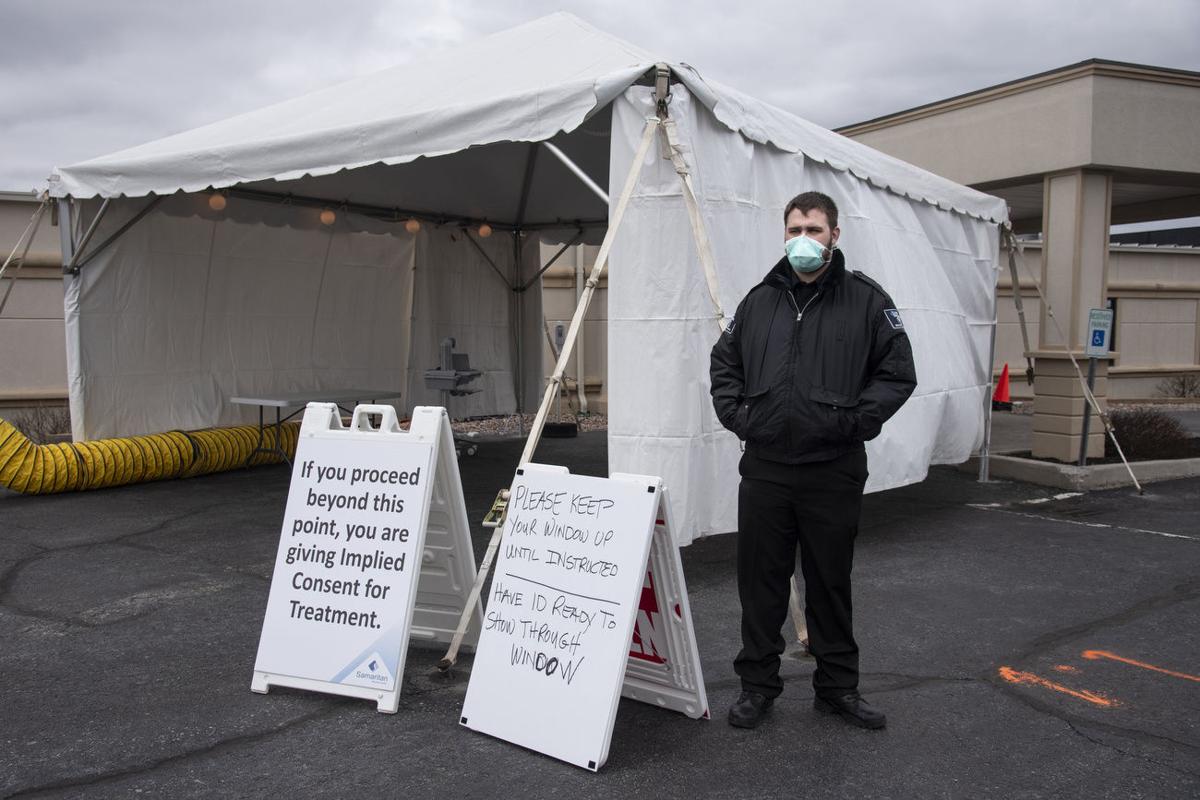 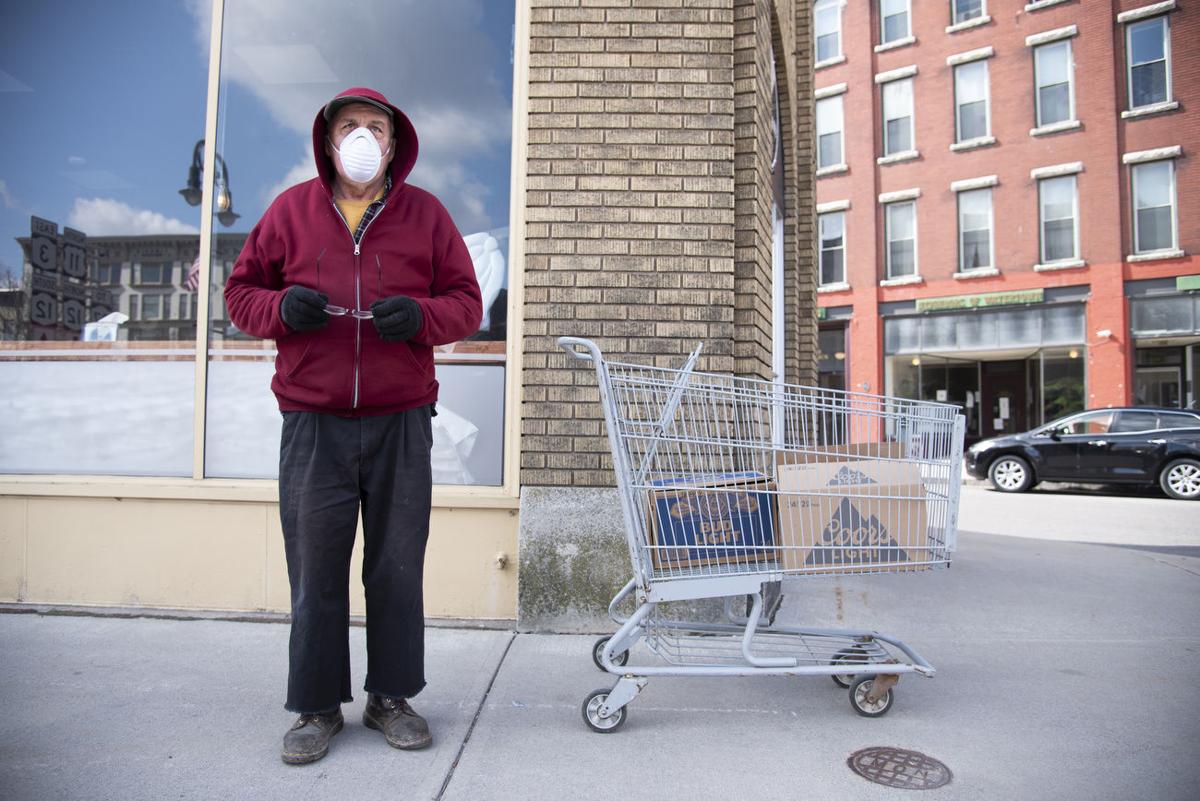 An encouraging message is displayed on a sign outside downtown Carthage. Emil Lippe/Watertown Daily Times

A sign telling people to remain six feet — one fishing rod — apart is taped to a small refrigerator inside the 1000 Islands Bait Store in Alexandria Bay. Sydney Schaefer/Watertown Daily Times

As New York, California and other states begin to see their numbers of new COVID-19 cases level off or even slip, it might appear as if we’re nearing the end of the pandemic.

President Donald Trump and some governors have pointed to the slowdown as an indication that the day has come for reopening the country. “Our experts say the curve has flattened and the peak in new cases is behind us,” Trump said Thursday in announcing the administration’s guidance to states about how to begin easing social distancing measures and stay-at home orders.

But with the national toll of coronavirus deaths climbing each day and an ongoing scarcity of testing, health experts warn that the country is nowhere near “that day.” Indeed, a study released this week by Harvard scientists suggests that without an effective treatment or vaccine, social distancing measures may have to stay in place into 2022.

Kaiser Health News spoke to several disease detectives about what reaching the peak level of cases means and under what conditions people can go back to work and school without fear of getting infected. Here’s what they said.

Health experts say not to expect a single peak day — when new cases reach their highest level — to determine when the tide has turned. As with any disease, the numbers need to decline for at least a week to discern any real trend. Some health experts say two weeks because that would give a better view of how widely the disease is still spreading. It typically takes people that long to show signs of infection after being exposed to the virus.

But getting a true reading of the number of cases of COVID-19, the disease caused by the coronavirus, is tricky because of the lack of testing in many places, particularly among people under age 65 and those without symptoms.

Another factor is that states and counties will hit peaks at different times based on how quickly they instituted stay-at-home orders or other social distancing rules.

“We are a story of multiple epidemics, and the experience in the Northeast is quite different than on the West Coast,” said Esther Chernak, director of the Center for Public Health Readiness and Communication at Drexel University in Philadelphia.

Also making it hard to determine the peak is the success in some areas of “flattening the curve” of new cases. The widespread efforts at social distancing were designed to help avoid a dramatic spike in the number of people contracting the virus. But that can result instead in a flat rate that may remain high for weeks.

“The flatter the curve, the harder to identify the peak,” said William Miller, a professor of epidemiology at Ohio State University.

Lowering the number of new cases is important, but it doesn’t mean the virus is disappearing. It suggests instead that social distancing has slowed the spread of the disease and elongated the course of the pandemic, said Pia MacDonald, an infectious disease expert at RTI International, a nonprofit research institute in North Carolina. The “flatten the curve” strategy was designed to help lessen the surge of patients so the health care system would have more time to build capacity, discover better treatments and eventually come up with a vaccine.

Getting past peak is important, Chernak said, but only if it leads to a relatively low number of new cases.

“This absolutely does not mean the pandemic is nearing an end,” MacDonald said. “Once you get past the peak, it’s not over until it’s over. It’s just the starting time for the rest of the response.”

Although Trump said the nation has passed the peak of new cases, health experts cautioned that from a scientific perspective that won’t be clear until there is a consistent decline in the number of new cases — which is not true now nationally or in many large states.

“We are at the plateau of the curve in many states,” said Dr. Ricardo Izurieta, an infectious disease specialist at the University of South Florida. “We have to make sure we see a decline in cases before we can see a light at the end of the tunnel.”

Even after the peak, many people are susceptible.

“The only way to stop the spread of the disease is to reduce human contact,” Chernak said. “The good news is having people stay home is working, but it’s been brutal on people and on society and on the economy.”

Before allowing people to gather in groups, more testing needs to be done, people who are infected need to be quarantined, and their contacts must be tracked down and isolated for two weeks, she said, but added: “We don’t seem to have a national strategy to achieve this.”

“Before any public health interventions are relaxed, we better be ready to test every single person for COVID,” MacDonald said.

In addition, she said, city and county health departments lack staffing to contact people who have been near those who are infected to get them to isolate. The tools “needed to lift up the social distancing we do not have ready to go,” MacDonald said.

Whether people can go back out to resume daily activities will depend on their individual risk of infection.

While some states say they will work together to determine how and when to ease social distancing standards to restart the economy, Chernak said a more national plan will be needed, especially given Americans’ desire to travel within the country.

“Without aggressive testing and contact tracing, people will still be at risk when going out,” she said. Social gatherings will be limited to a few people, and wearing masks in public will likely remain necessary.

She said major changes will be necessary in nursing home operations to reduce the spread of disease because the elderly are at the highest risk of complications from COVID-19.

“How big that will be depends on how long you wait from a public health perspective (to relax preventative measures). The longer you wait is better, but the economy is worse off.”

The experts pointed to the 1918 pandemic of flu, which infected a quarter of the world’s population and killed 50 million people. Months after the first surge, there were several spikes in cases, with the second surge being the deadliest.

“If we pull off the public health measures too early, the virus is still circulating and can infect more people,” said Dr. Howard Markel, professor of the history of medicine at the University of Michigan. “We want that circulation to be among as few people as possible. So when new cases do erupt, the public health departments can test and isolate people.”

The Harvard researchers, in their article this week in the journal Science, said their model suggested that a resurgence of the virus “could occur as late as 2025 even after a prolonged period of apparent elimination.”

Experts say there is no one-size-fits-all approach to when office buildings can reopen, schools can restart and large public gatherings can resume.

The decision on whether to send youngsters back to school is key. While children have been hospitalized or killed by the virus much less frequently than adults, they are not immune. They may be carriers who can infect their parents. There are also questions of whether older teachers will be at increased risk being around dozens of students each day, MacDonald said.

Another factor: The virus is likely to re-erupt next winter, similar to what happens with the flu, said Jerne Shapiro, a lecturer in the University of Florida Department of Epidemiology.

Without a vaccine, people’s risk doesn’t change, she said.

Experts doubt large festivals, concerts and baseball games will happen in the months ahead. California Gov. Gavin Newsom endorsed that view Tuesday, telling reporters that large-scale events are “not in the cards.”

“It’s safe to say it will be a long time until we see mass gatherings,” MacDonald said.