You have permission to edit this article.
Edit
Home
COVID-19: Back open for business
News
Sports
Obituaries
Opinion
Arts & Life
Calendar
Photo and Video
Ads
More
Share This
1 of 11 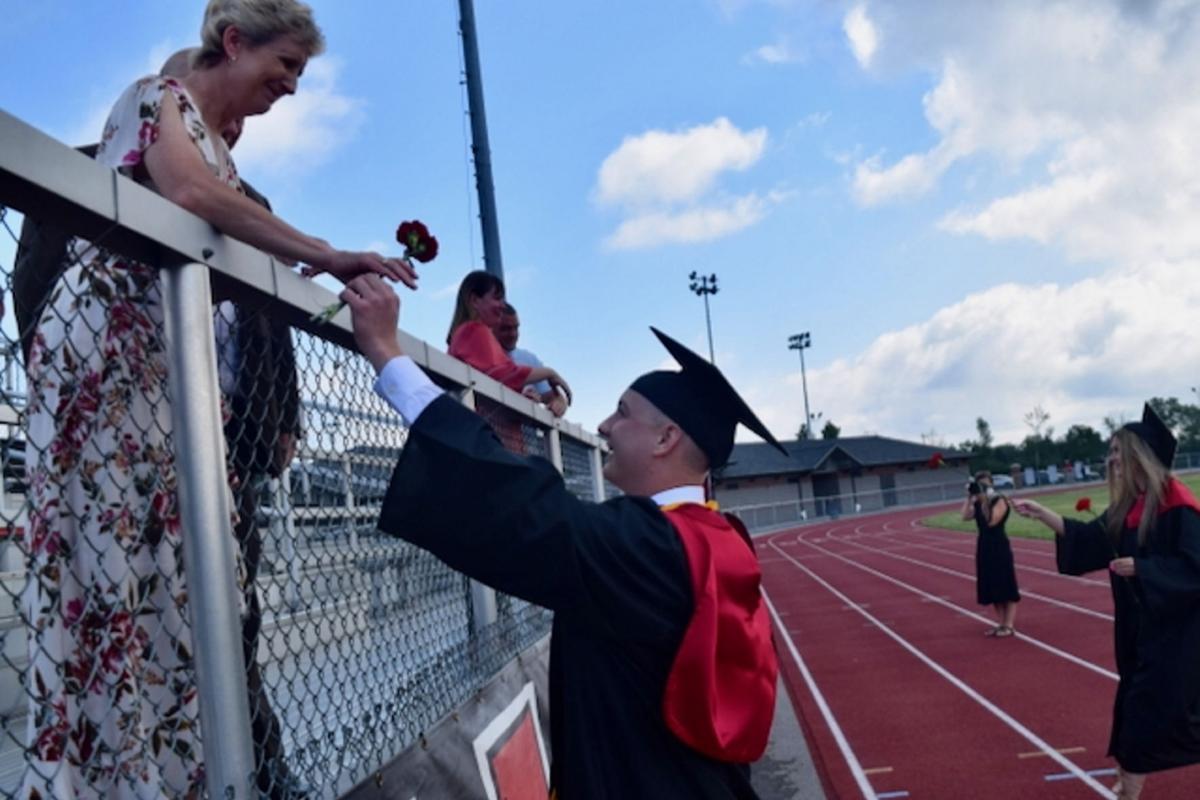 Alex Brasky/Daily NewsDuring the ceremony, each graduate took the time to honor his or her family members with a rose. 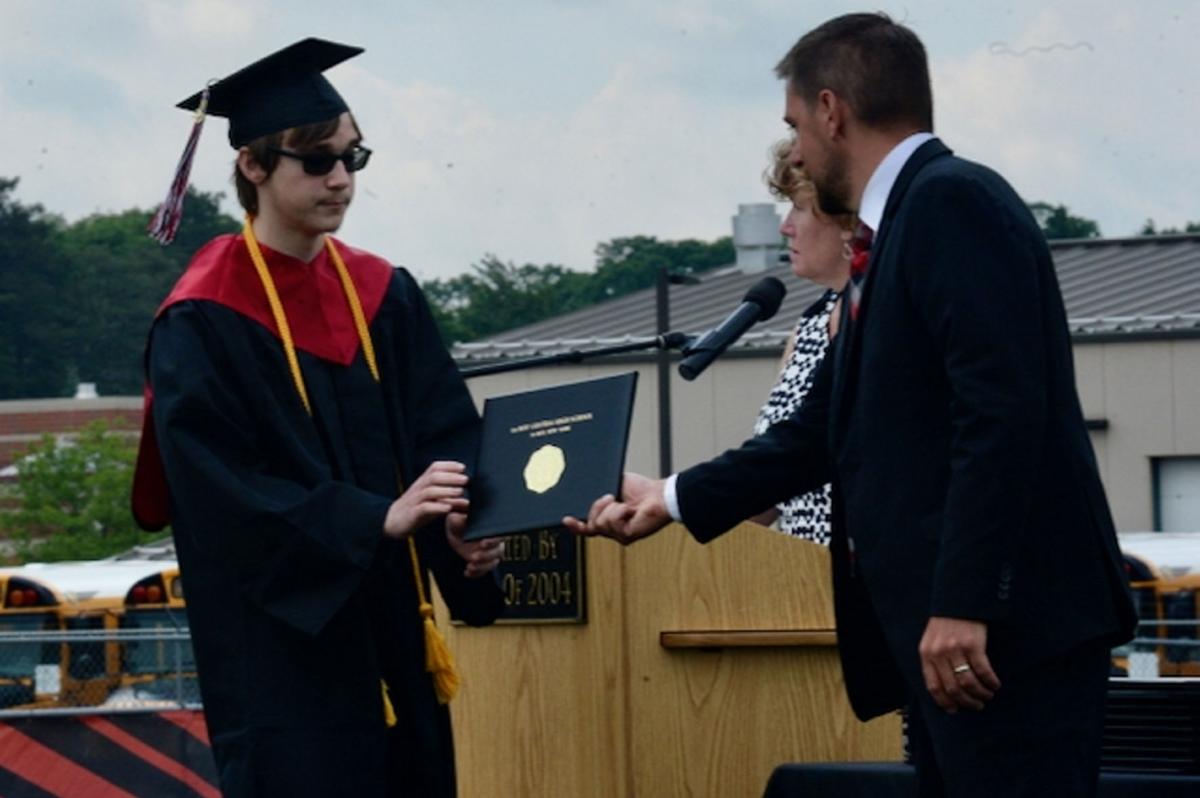 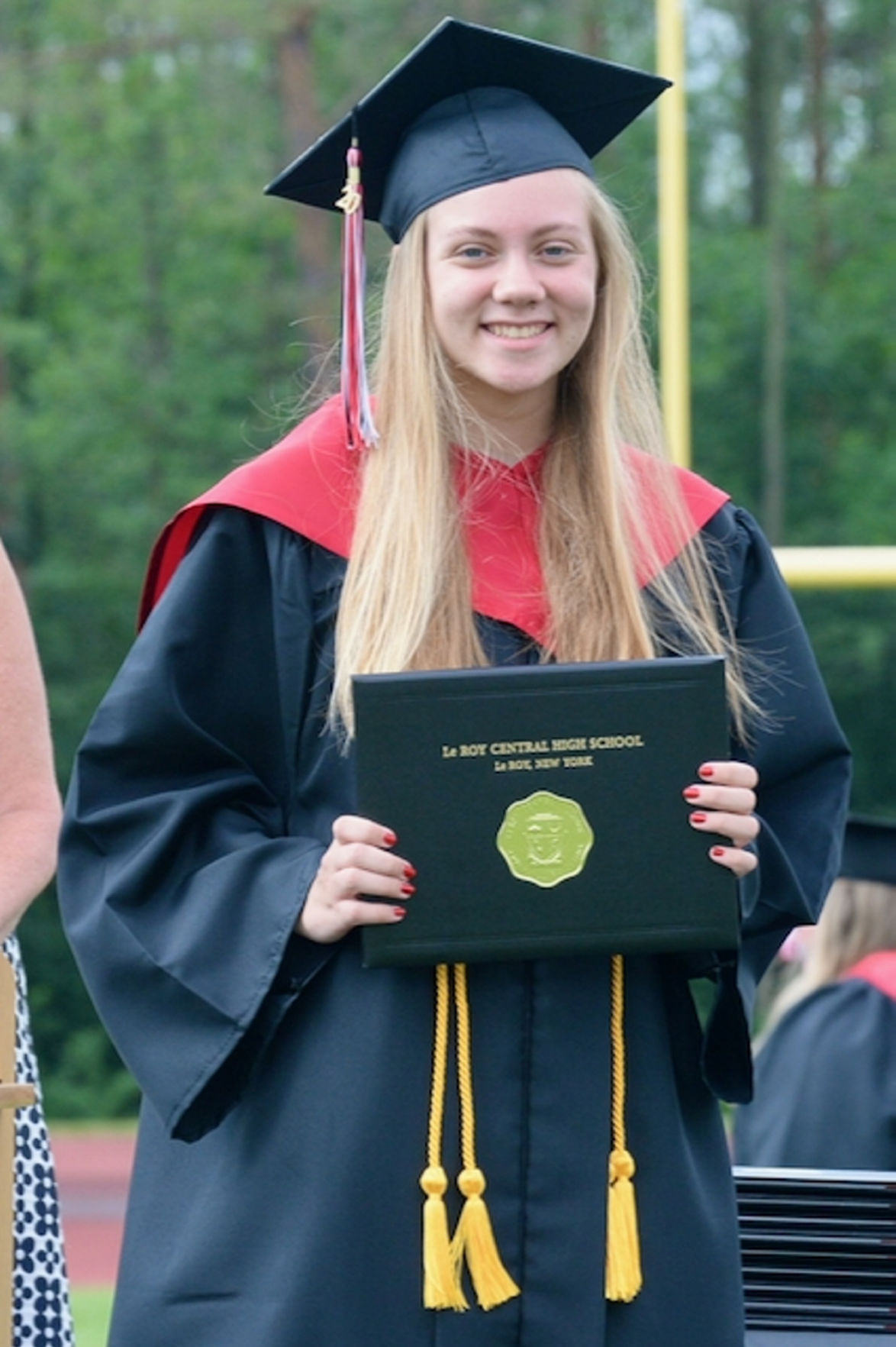 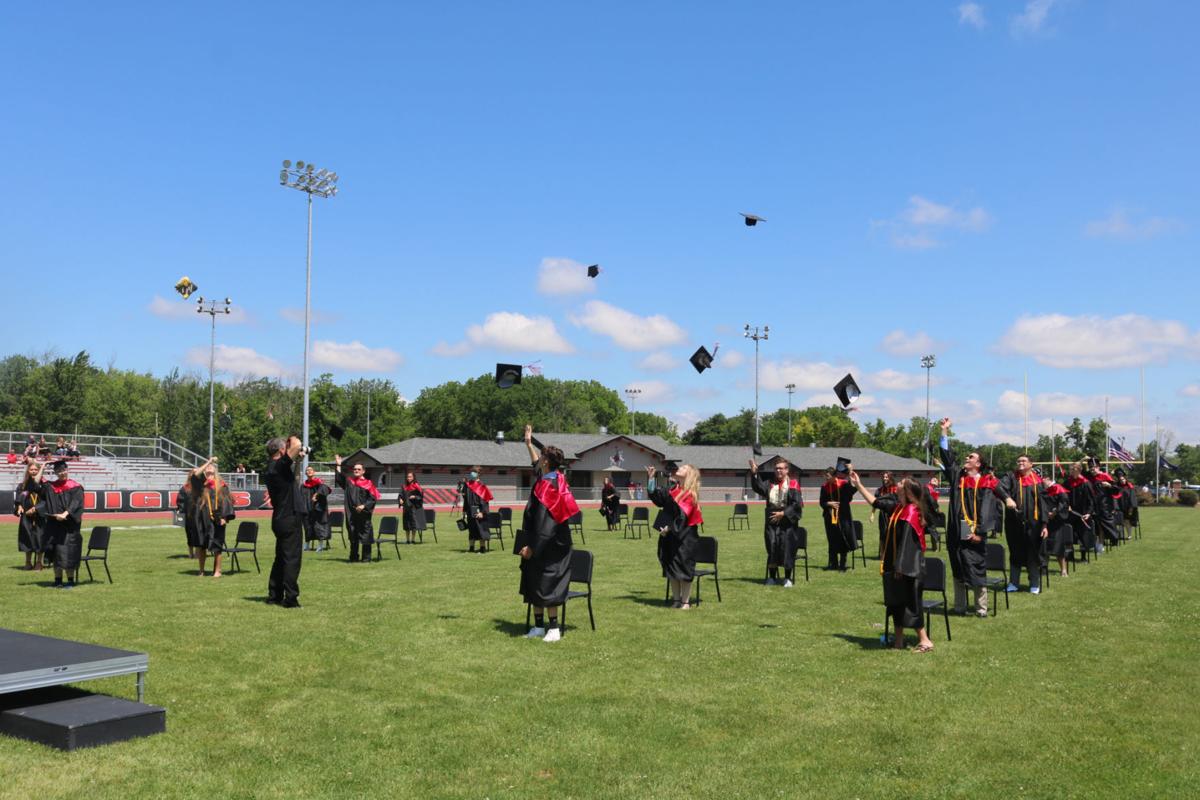 BRIAN QUINN/Daily NewsSome of the Le Roy graduates tossed their caps in the air toward the end of the second ceremony. 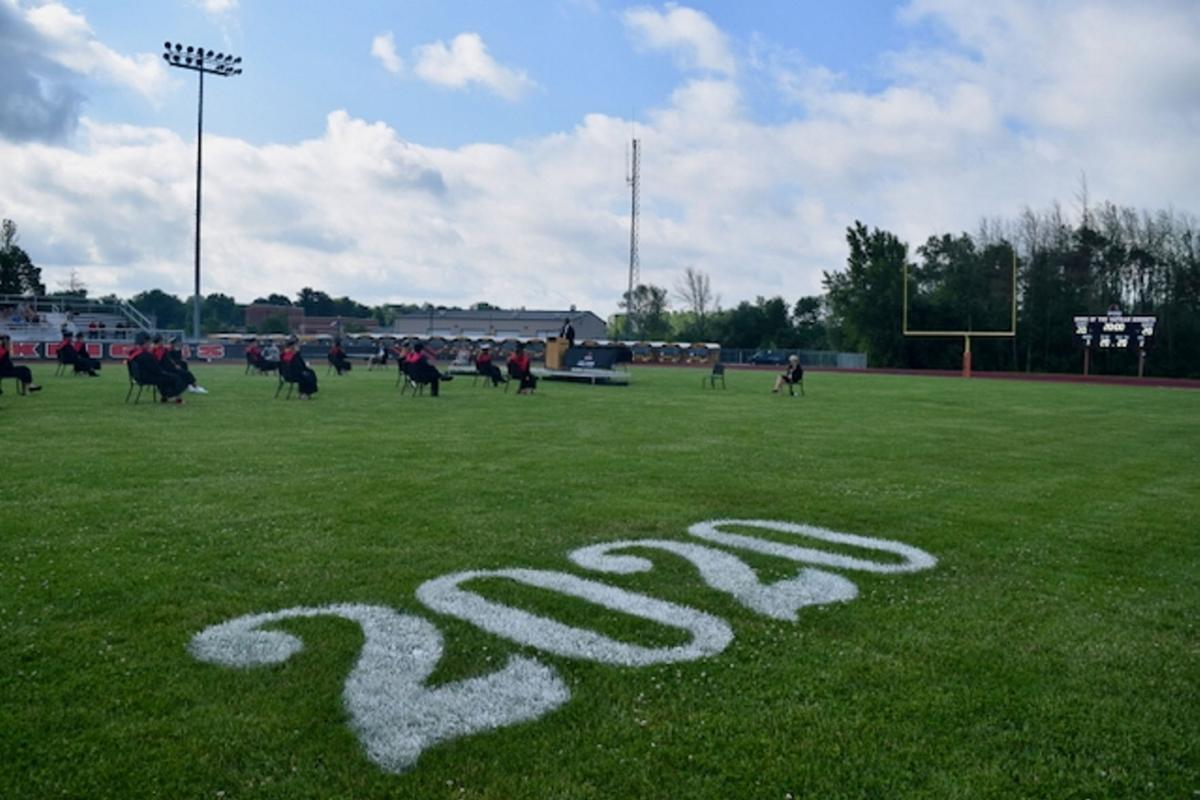 Alex Brasky/Daily NewsLe Roy hosted its graduation on today, as the Knights welcomed the Class of 2020 on the field at Hartwood Park. 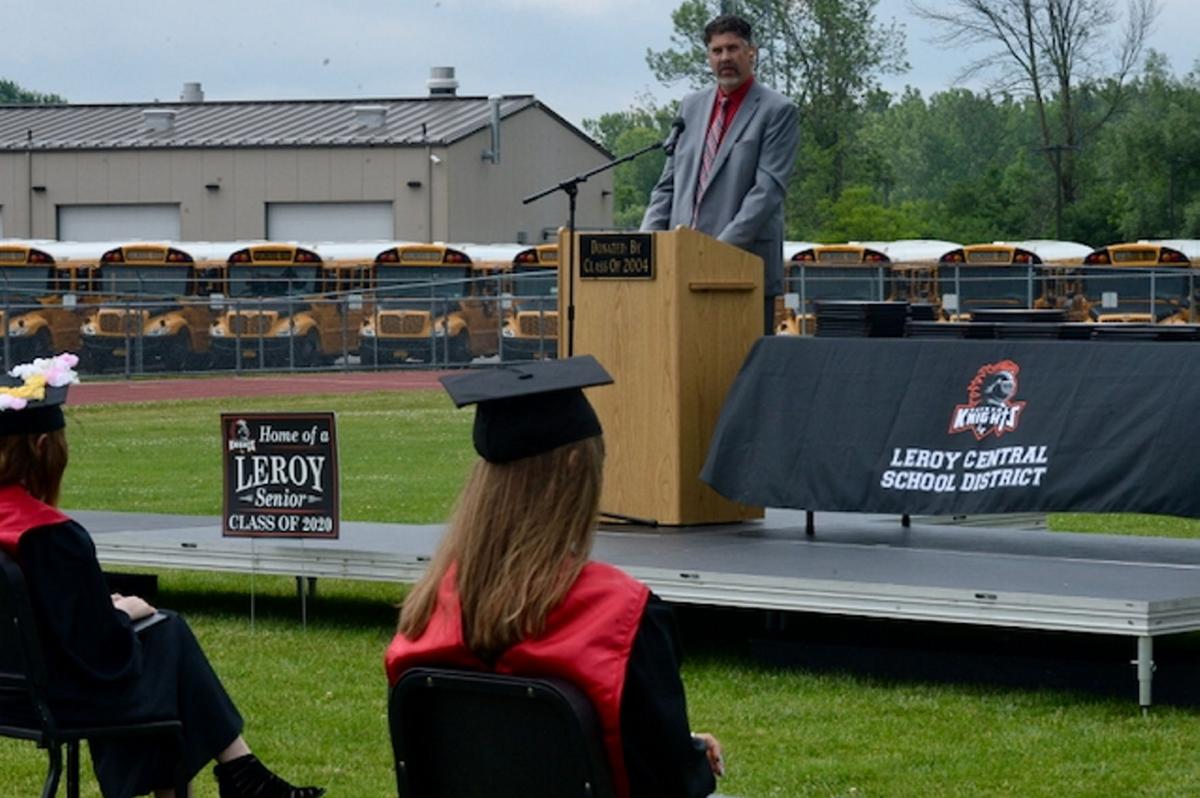 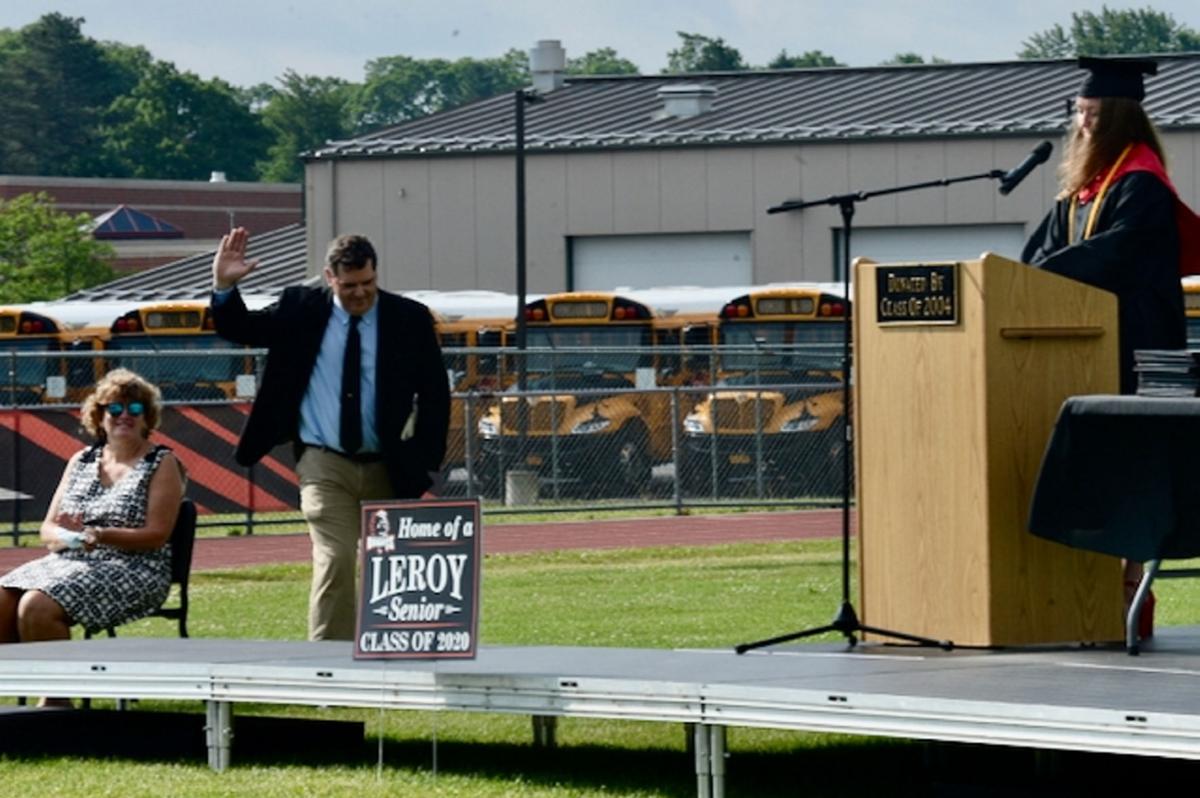 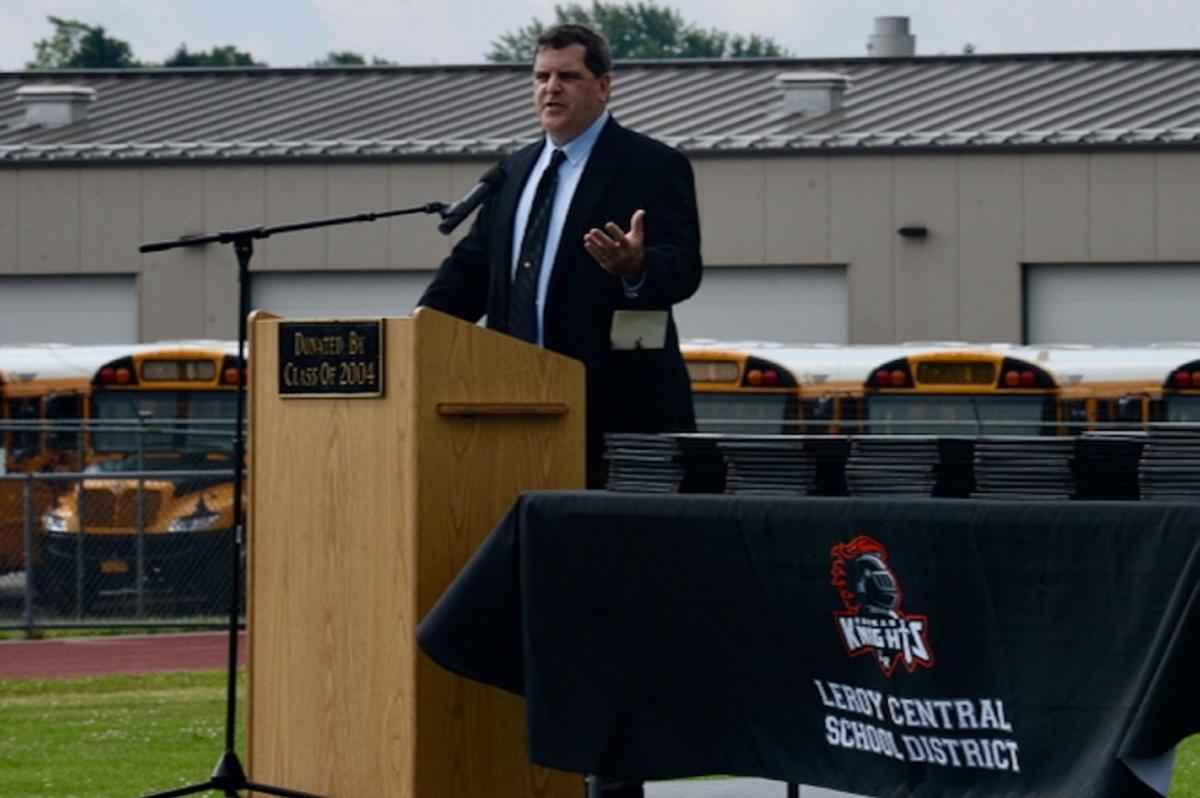 Alex Brasky/Daily NewsFaculty/staff speaker Brad Dietsch told the Class of 2020 to strive to be selfless. 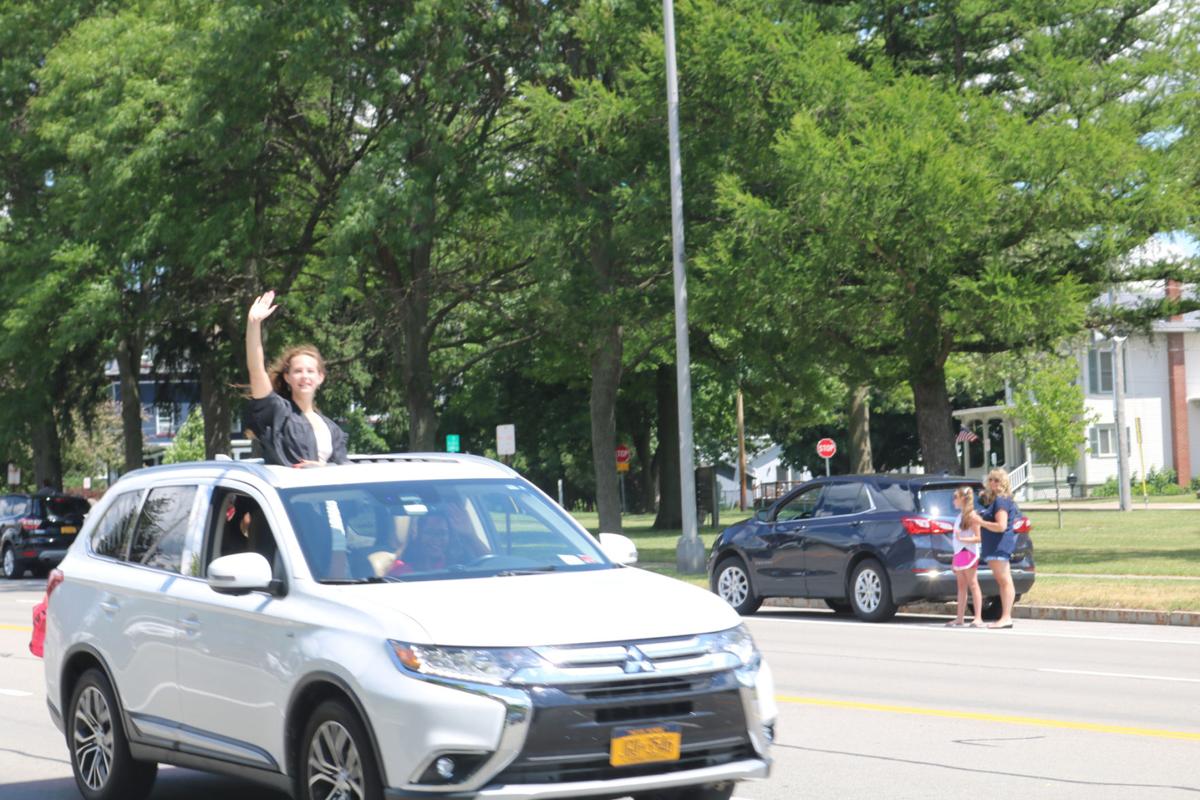 BRIAN QUINN/DAILY NEWSOne of Le Roy’s graduates waves on the way down Main Street this afternoon. 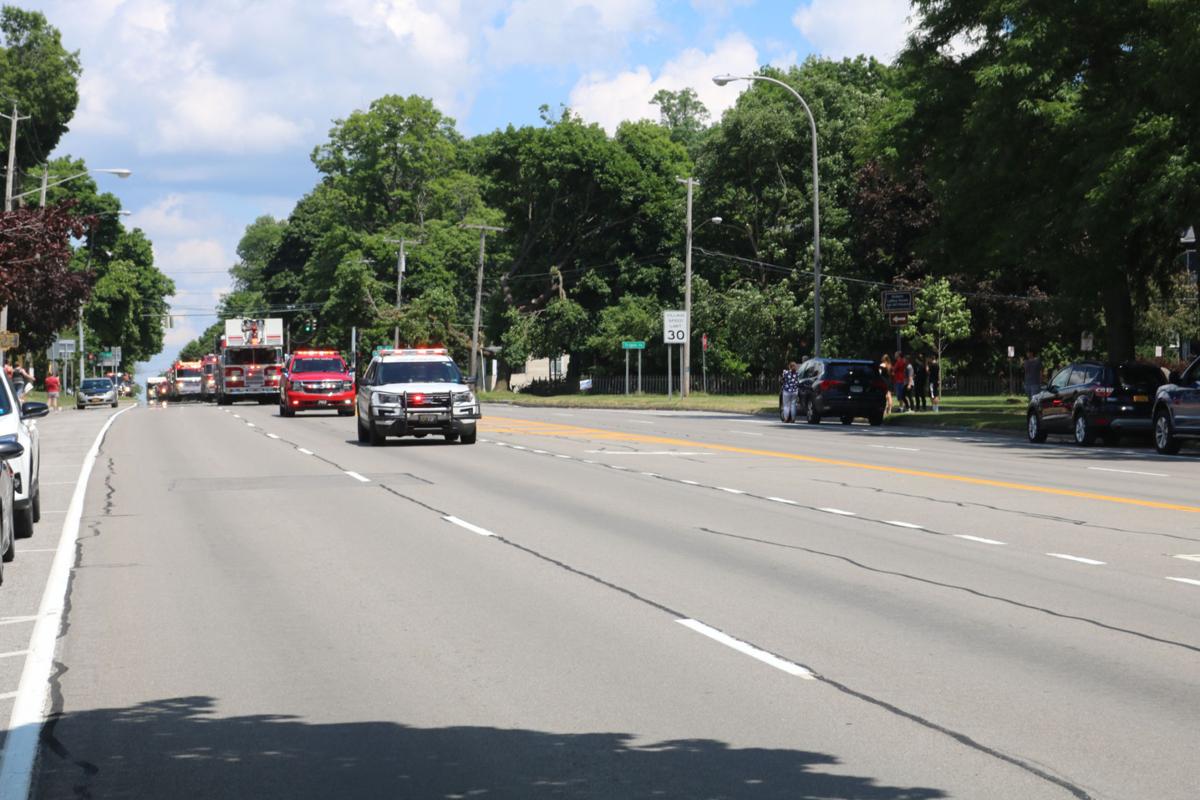 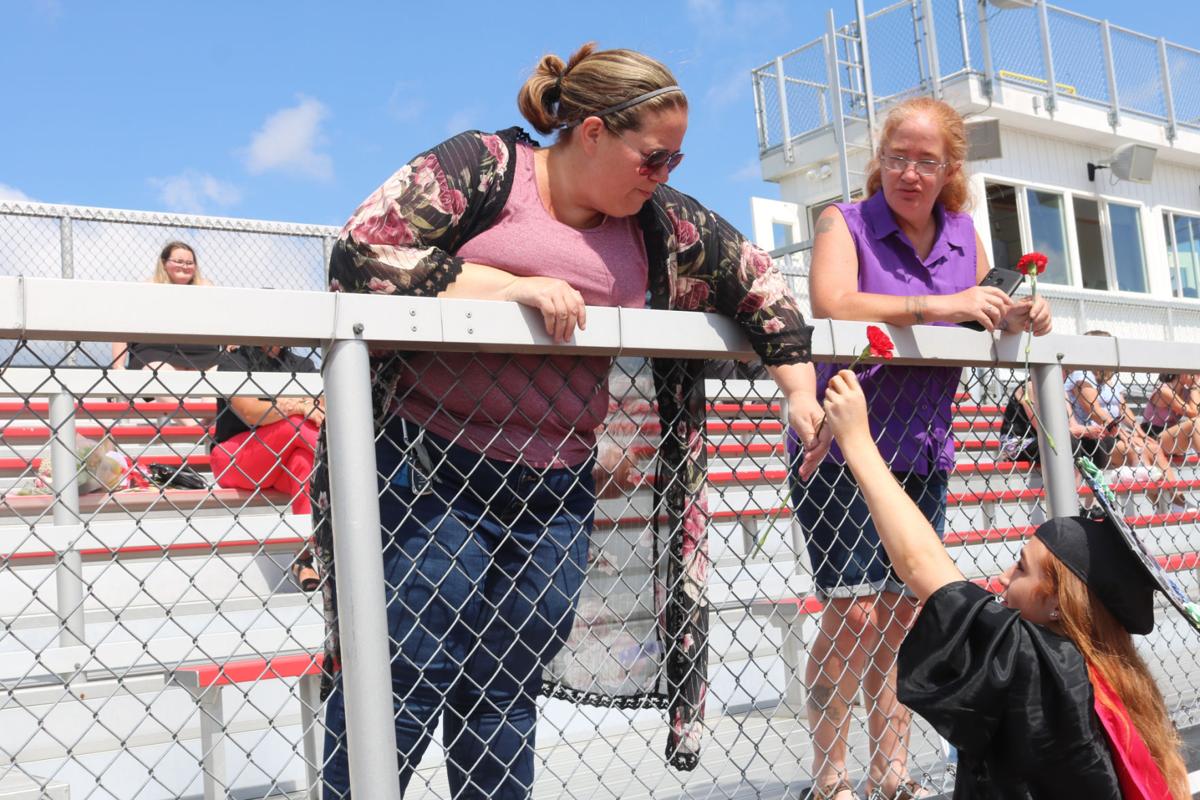 Alex Brasky/Daily NewsDuring the ceremony, each graduate took the time to honor his or her family members with a rose.

BRIAN QUINN/Daily NewsSome of the Le Roy graduates tossed their caps in the air toward the end of the second ceremony.

Alex Brasky/Daily NewsLe Roy hosted its graduation on today, as the Knights welcomed the Class of 2020 on the field at Hartwood Park.

Alex Brasky/Daily NewsFaculty/staff speaker Brad Dietsch told the Class of 2020 to strive to be selfless.

BRIAN QUINN/DAILY NEWSOne of Le Roy’s graduates waves on the way down Main Street this afternoon.

LE ROY — This year’s Le Roy seniors did not graduate as one group today, but those who were able to participate were able to take one last victory lap in the form of a parade Sunday afternoon.

With 95 graduates leaving the halls of Le Roy, the proceedings were split into three ceremonies. Speaking during the second of the three ceremonies, Valedictorian Madison Heaney said there’s a lot she’ll miss after leaving Le Roy Jr.-Sr. High School.

“High school is filled with many simple, but nonetheless special moments that I wish I could experience just one last time,” she told her friends and classmates from the podium today. “I’ll miss the morning car rides with my brother, Cole, while we blast the music to try and wake ourselves up. I’ll miss eating lunch with my best friends, talking about our days and sometimes laughing until our lunch almost comes back up.” Pep rallies, winning the spirit shield, Friday night football games, high school dances and spending time on the weekends with friends are on that list, too.

“It’s hard to believe that March 13 was the last day we would experience some of these moments. However, I am beyond grateful for all of these memories that make saying goodbye so difficult. To the underclassmen who still have time left, go to that dance, go to the game, spend as much time with the people you care about. Cherish every single second you have in high school, even on the bad days,” she said.

Salutatorian Katie Carmichael, who also spoke at the second ceremony, said there were several people to thank who helped her get to this point. The group included her parents, the Jr.-Sr. High School faculty and staff, Principal Tim McArdle and her two best friends, Leslie Arneth and Kassidy Steffenilla.

“There is so much going on in the world right now, both bad and good. However, I hope when we look back at our senior year as well as all of our high school years, we do not dwell on the bad but we rejoice in the good,” she said. “We think about prom with our friends, we think about sporting and musical events with the Cavalry, and we also think about the pep rallies, which may I add, the Class of 2020 has won three years in a row, moreso proving my point — we are the superior class.

“We entered this world during one of the most tragic times in our nation’s history, 9/11, and now we end this chapter of our lives as the graduating class of COVID-19,” Carmichael said. “Because of this, we’ve had to make many adjustments in our lives. We missed our senior prom ... We missed our senior trip where we would have made lifelong memories as a whole class, and most importantly we are all not sitting here together today. But, whether we are here as 30 or 90, we are all here together in spirit.” Eighth-grade technology teacher Brad Dietsch was chosen to be the faculty and staff speaker. He said he’d been searching for a message to pass along to the graduates and stuck with some simple advice.

“As you travel down the road of life, I would challenge all of you to strive to be a selfless person. What I mean by selfless ... is a person that supports and lifts up others,” he said.

Secondly, Dietsch urged the graduates to find joy in their lives.

“Whatever you decide to pursue as a job or career, I would hope you find something you are passionate about and brings you happiness. Some of you will be serving our country in the military. Some people will enter the workforce. Many of you are enrolled to attend college this coming Fall. Whatever decision you have made… find happiness in it,” he said.

Finally, Dietsch took the time to thank the class for choosing him to represent its teachers, teachers’ aides, guidance counselors, administrators and coaches as the speaker.

“Think about all the incredible people you have crossed paths with over your time here at school. From kindergarten, first, second… through all high school teachers — all those amazing people who, along with your parents/family have made an impact on you and the direction of your life,” he said.

When McArdle spoke, he said if there is ever a group of Oatkan Knights that is ready to enter today’s world, it is the Class of 2020.

“As a class and individually, you flew higher and higher as you journeyed through your years as a Knight and along with that you have taken our entire school with you to new heights along the way. You rolled up your sleeves in the classroom. You sprang into action within our community to pay it forward so many times. You filled our extracurriculars, playing huge roles in clubs like DECA, Chess, Mock Trial, Pride & Allies, and Trap,” McArdle said. “The artistic level of this class is outstanding, please let this be just the beginning of your creative years. You put on amazing performances on our stage, you won championships in competition, you filled our stands to support each other, YOU traveled to support each other and piled into cars driving all over Section V to cheer on your classmates. Your class spirit was so contagious and that electricity brought you together as a class to win not one, not two, but three straight spirit shields, a record that may never be broken.”

Forty-three percent of this class are going to a four-year college, 28 percent to a two-year college and 27 percent has already been hired or will go into the workforce and two graduates, Nathan Griffin (National Guard) and Matthew Henning (Marines) are joining the military.

Henning said the class had a positive attitude about everything that happened this spring.

“We just took it like a champ. We never really doubted ourselves. We went with the flow,” he said. “We still had a lot of fun. We’d hang out. Some people had their own proms. They were just little gatherings that everyone did.”

Henning said he would have liked to have one graduation for everybody.

“It would get everyone together, the entire class, so we’re all here together and not separated, so we all get to experience the same thing,” he said.

Henning who will join the Marine Corps, said he’s been thinking about doing so for two years.

“There’s a lot of good things I could get off of it. There’s future employment options, people are willing to hire me because they know I’ll have a good work ethic. The benefits are really good.”

The Le Roy graduate will report Aug. 17 to boot camp at Parris Island, S.C., for 13 weeks.

Grant Gilligan will major in business at the University of Louisville in Louisville, Ky.

On COVID-19 and the effect it had on the spring of senior year, he said, “It wasn’t like we planned it. We were trying to have a lot of fun. That’s what you go through high school for, those last three months. Getting them taken away was definitely tough. We definitely made the most of it. I thought that the administration did a great job of keeping us up to date, keeping us together with the class Zooms. I thought overall we made the best of the experience.”

Gilligan said the class couldn’t have done what it planned to do this spring.

Cole Heaney said he will go to the University at Buffalo to study business administration. He said it was unfortunate the way the second half of this year turned out.

“I only play baseball, so it kind of stunk to get that taken away from us, especially coming off of last year. It was a really good year for us. (There were) high expectations this year, but we got it taken away. We still made the best of it. It was definitely fun to get together the other day (at Friday’s rehearsal) and see all of our friends and get to experience everything,”

“We’ll definitely never forget it, because it was a very memorable year,” he said.

Gilligan said it definitely would have been better if the graduates could have had graduation all together.

“That’s who you grew up with. You want to be together with your classmates — all of them, not just 30 of them. If it wasn’t feasible with the governor’s restrictions, then we did the best we could,” he said.

Heaney said the ceremony worked out well because he and Gilligan are best friends and they have a couple of other friends with whom they’re really close.

“We all got to experience this together. We’ve been waiting for it for a long time. It was a little unfortunate that we couldn’t be with each other as a whole class, but we’ll definitely get together whenever we can, whenever the restrictions are released a little bit.”

When the Class of 2020 parade came down Main Street, Le Roy students Evan and Katie, who declined to give their last names, were among the residents there to see the graduates.

Some of our best friends just graduated. They’re going to be driving by,” said Katie, who made a sign. “Three of our friends are carpooling for the parade together and we’re excited to see them.

Also watching the parade was Julie Long, who had family friends graduating this year.

“We know lots of the kids because this is a small town. We just are excited to celebrate with all the students,” she said. “We watched the graduation on live streaming from home and got to cheer from our house and then we walked down the street to watch them in the parade so we could see their smiling faces.”