Sign Up
Log In
Purchase a Subscription
You are the owner of this article.
Edit Article Add New Article
You have permission to edit this article.
Edit
Home
News
Sports
Obituaries
Opinion
Arts & Life
Calendar
Photo and Video
Ads
eEdition
More
Share This
1 of 7 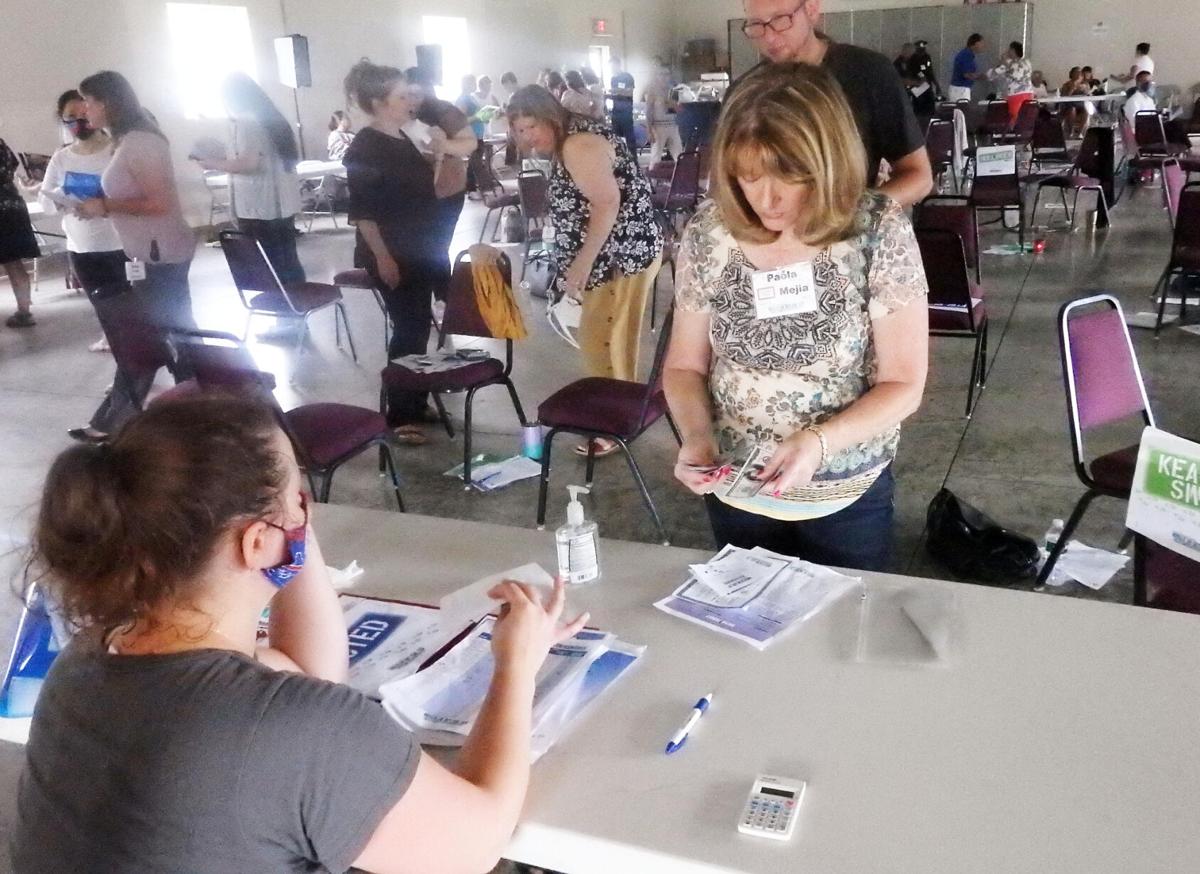 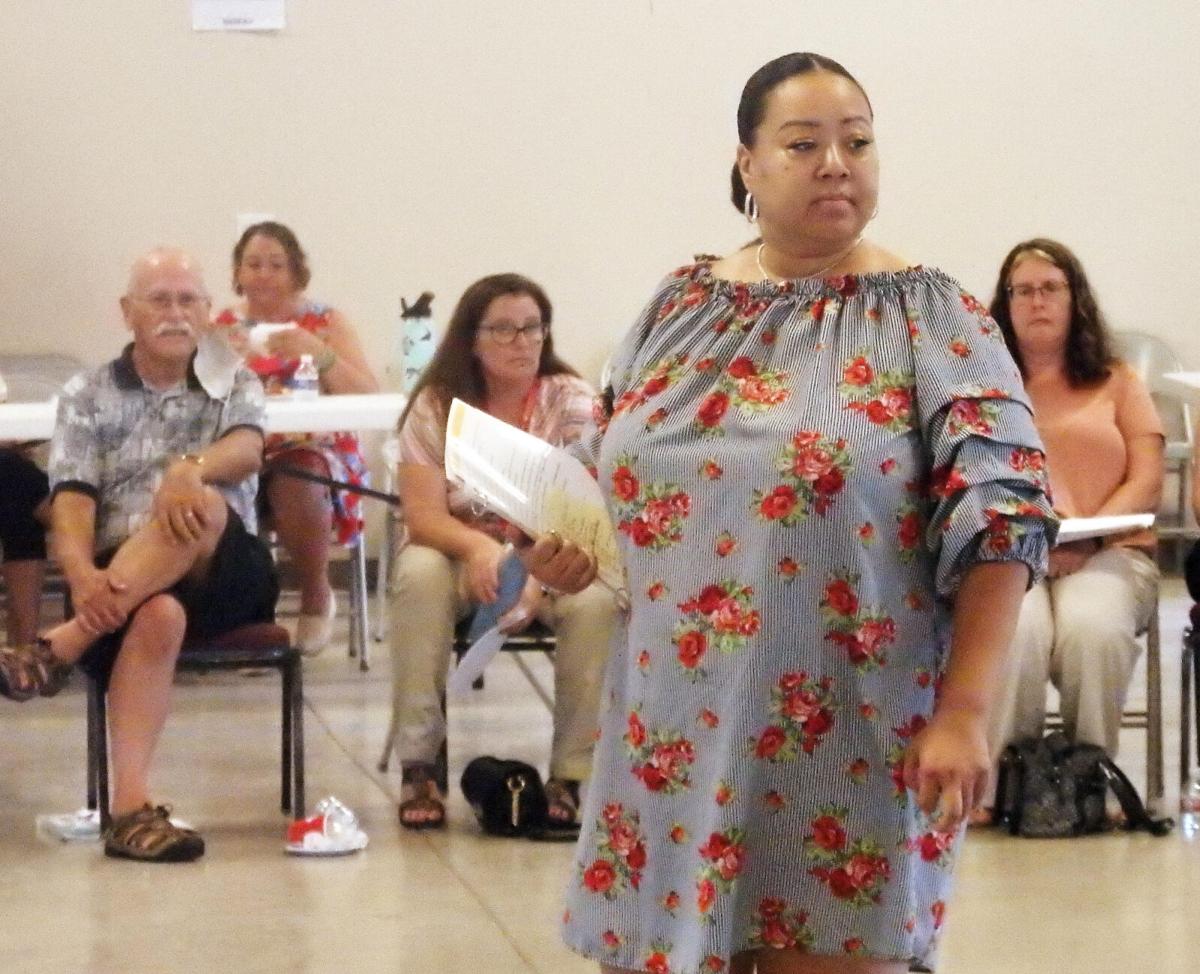 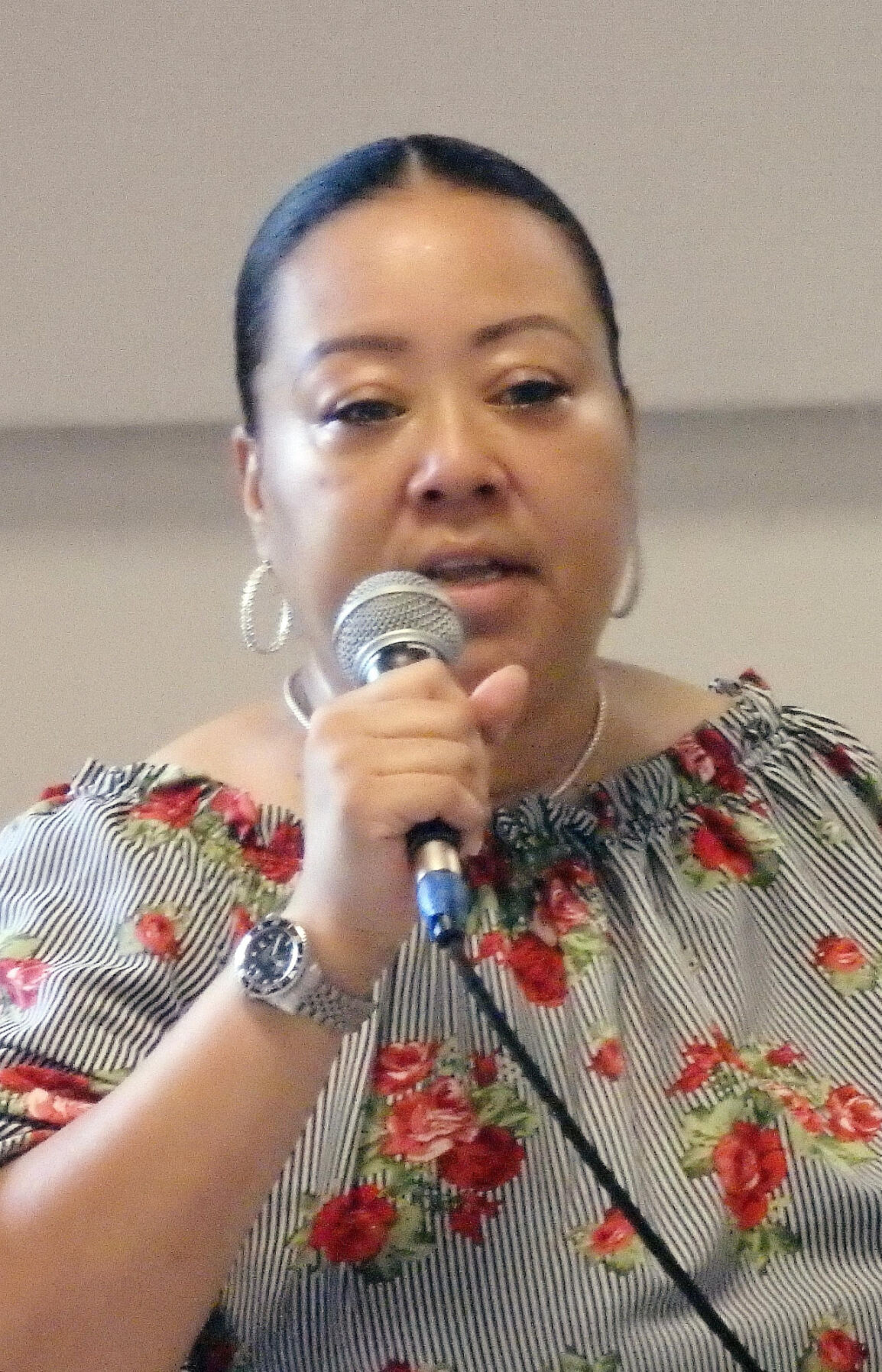 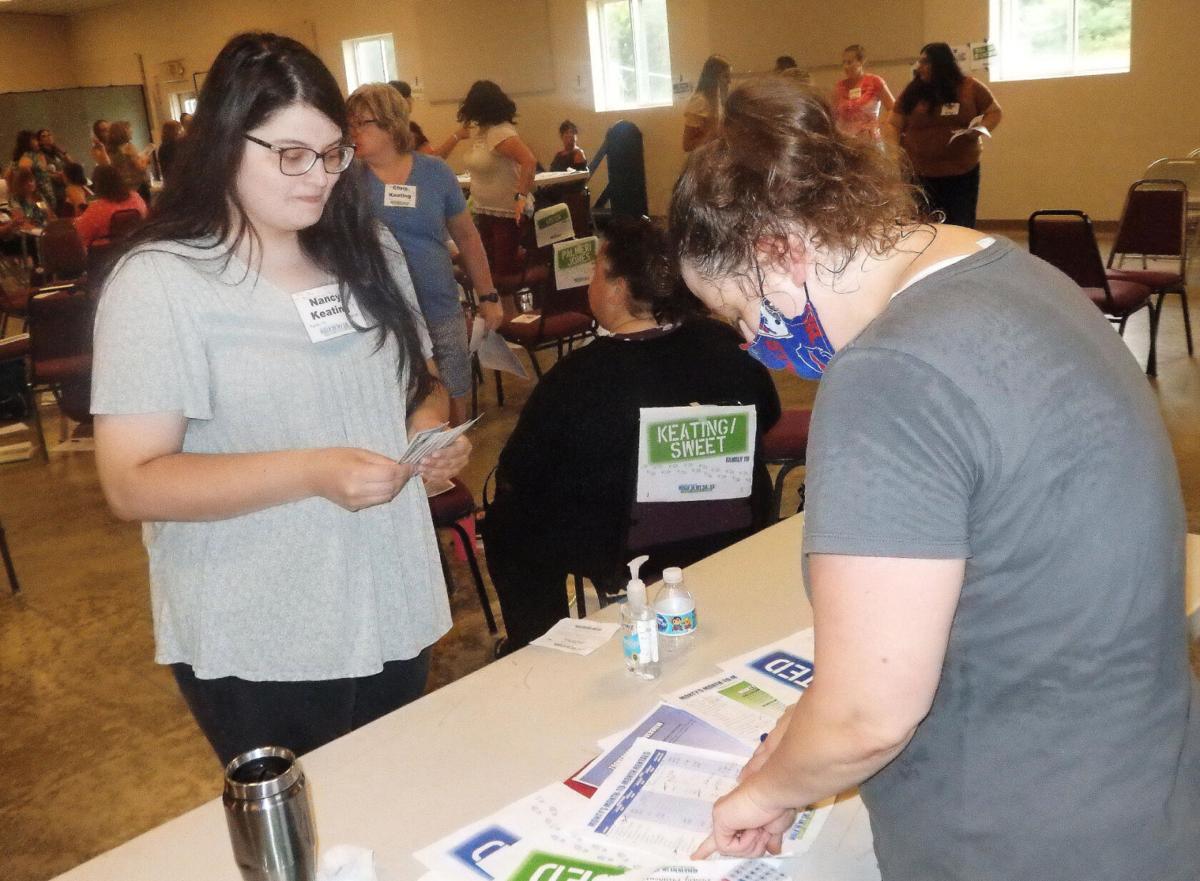 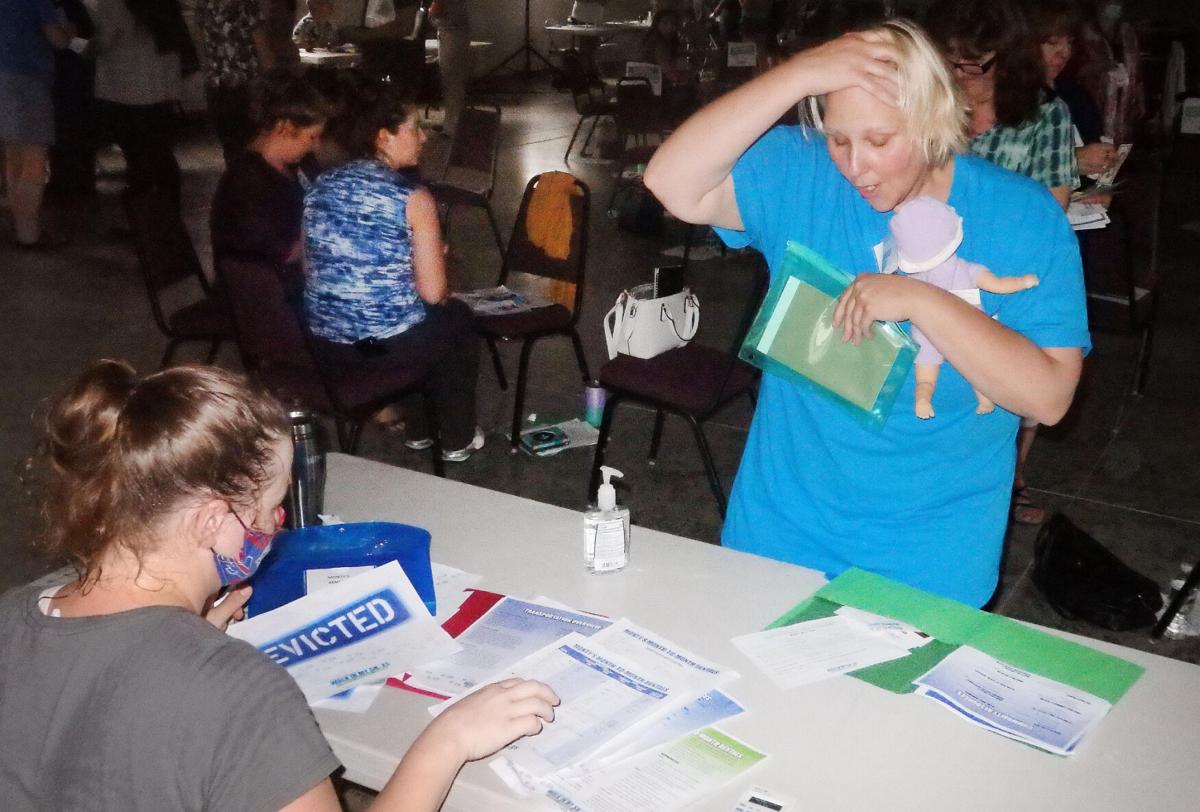 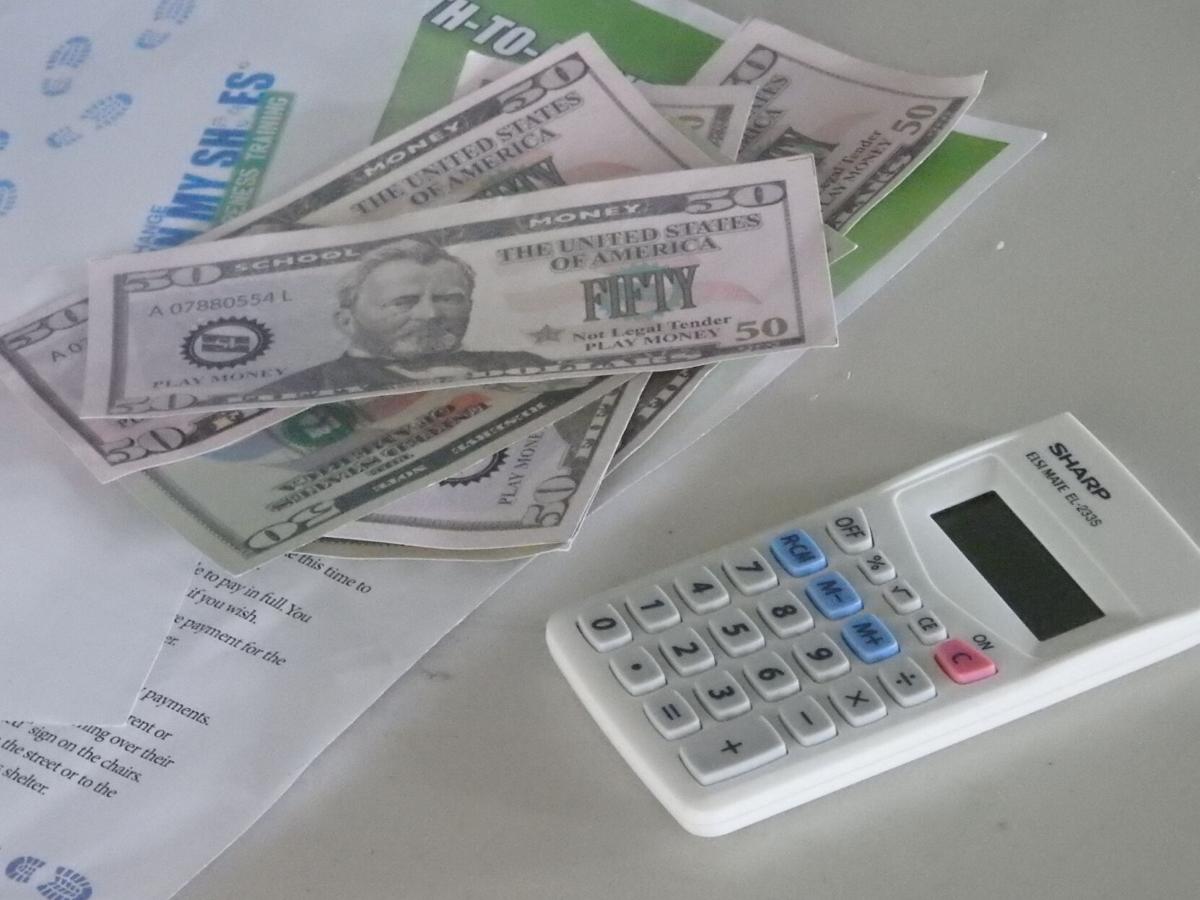 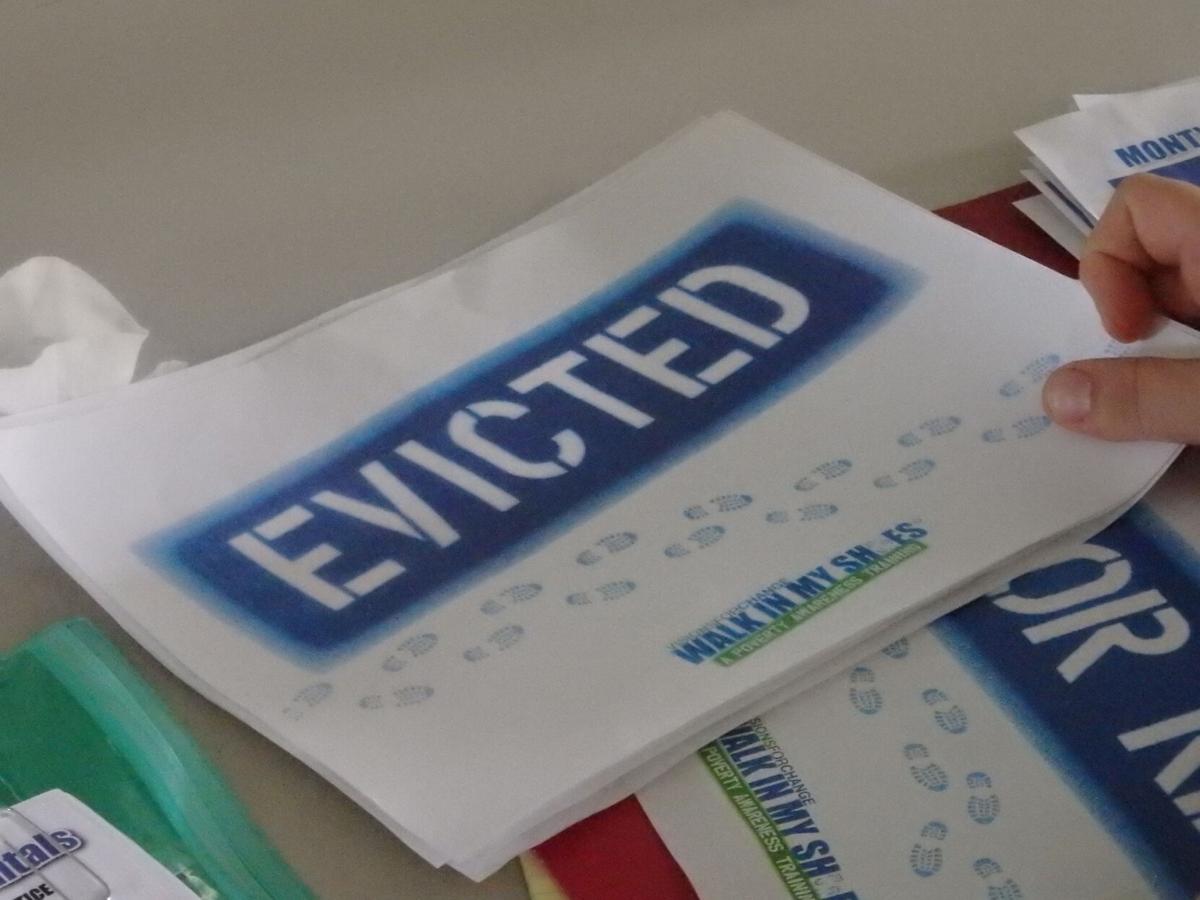 She makes her way quickly through a roomful of pretend families Thursday morning at the Valley Chapel Ministry Center.

She tracks down those who owe back rent — one of the last people they want to see.

How many has she evicted so far? “Oh geez, three or four?” she responds with a bit of a laugh. “There were a couple of people who came begging me for charity — as they do — so there were a couple people I cut a deal with. There’s one who came by and said ‘I’ve got $440 left.’ She’s got to see me by the end of next week.”

Welcome to the to the tough, often desperate, and sometimes humiliating world of poverty.

In real life, Berger is a staffer at RESTORE sexual assault services. But this morning she’s playing a much more heartless role.

The event was Wyoming County’s first-ever poverty simulation. About 85 area officials and staff from various agencies tried to see if they could navigate the harsh circumstances people often find themselves in.

“The lights are off (inside the building) because they didn’t pay their utility bills,” said Carrie Johnson, community and family services director for Wyoming County Community Action Incorporated. “It’s a realistic, ‘put yourself in other people’s shoes’ poverty simulation event.”

The session was sponsored by WCCAIC and Spectrum Health and Human Services, featuring a program conducted by Coordinated Care Services Inc. of Rochester.

“We have 22 agencies represented here from Wyoming County,” Johnson said. “We have Social Services, the Sheriff’s Office, RESTORE and Spectrum Health ... All these people work firsthand to provide services to those who have need, and those who are often disadvantaged in Wyoming County. You put yourselves in their shoes and really feel the struggle.”

Participants were given identities to roleplay throughout the proceedings. They could be single mothers, mixed generation families and others facing commonplace challenges.

They then tried to navigate the tough choices and situations people encounter in real life — maybe they can’t find an apartment because their family’s name has a “reputation” or they have the wrong skin color.

How do you get a good job if you’ve been jailed for stealing from the grocery store, or how do afford child care while you simultaneously need to be at work?

Social Services and other agencies can try to help, but it often involved long lines and waiting times. And the experience isn’t always welcoming if you’re from “the wrong side of the tracks.”

Derek McNeil is a volunteer with CCSI who played a police officer.

How many people did he have to arrest?

Pretty much the entire crowd, he said. But Wyoming County was unique because somebody had managed to steal the toy gun he carried successfully — first time that’s ever happened.

“I left the gun out and somebody stole it like they normally do, because they take it and they’ll try to pawn it,” he said. “But whoever got it, it never turned up. Usually every session I always find the gun that got stolen, but whoever did it was really good.”

Do the participants simply take it upon themselves to steal the gun? “Yeah, because usually when they get to the point they don’t have any money, they’re getting evicted, the lights are out ... Desperate means, desperate measures. That’s sort of where it goes.”

McNeil said he also “arrested” Wyoming County Sheriff Greg Rudolph — one of the simulation’s participants — as soon as the session started. That prevented Rudolph from making a probation appearance, compounding the problems he was already facing.

“You get a very good example of both sides of the fence,” McNeil said. “Those are daily things that affect people in the urban community, and not just the urban community — people who are affected by poverty, period. Your insurance is due do you’ve got to sell the kids’ bike. You know what I mean?”

Although the day’s activity was only a simulation, it shows real life effects, said senior consultants Nancy Shelton and Betty Garcia-Mathewson of CCSI.

People living in poverty will find ways to try to survive.

Somebody in the neighborhood may be good at child care, but may be hamstrung without access to the education needed to meet the job and licensing requirements. Living under constant stress and worry can lead to significant health problems.

And those are just a few.

Kelly McLaughlin of WCCAIC was assigned the identity of an 18-year-old single mom. She wound up getting arrested and her child taken away in the simulation because she was late showing up to daycare after work.

Being in jail, she lost her job too.

“It was eye-opening,” she said. “Considering all the hoop and obstacles we had to jump through and over just to pay rent, put food on the table and find a job.

“You find a job but then child care has to be lined up,” she said. “But then when you go to do that, you’ve lost your job because you didn’t show up to work on time. It gave me a new perspective on why my clients go through on a daily, weekly or monthly basis.”

That’s typically among the biggest takeaways.

“I think with a lot of people, it’s the fact that maybe they were not as aware about the nuances of poverty as they thought they were,” she said. “Even if you experience poverty yourself, experiencing it under a different script, you will be exposed to other obstacles or experiences that you may not have previously experienced.”