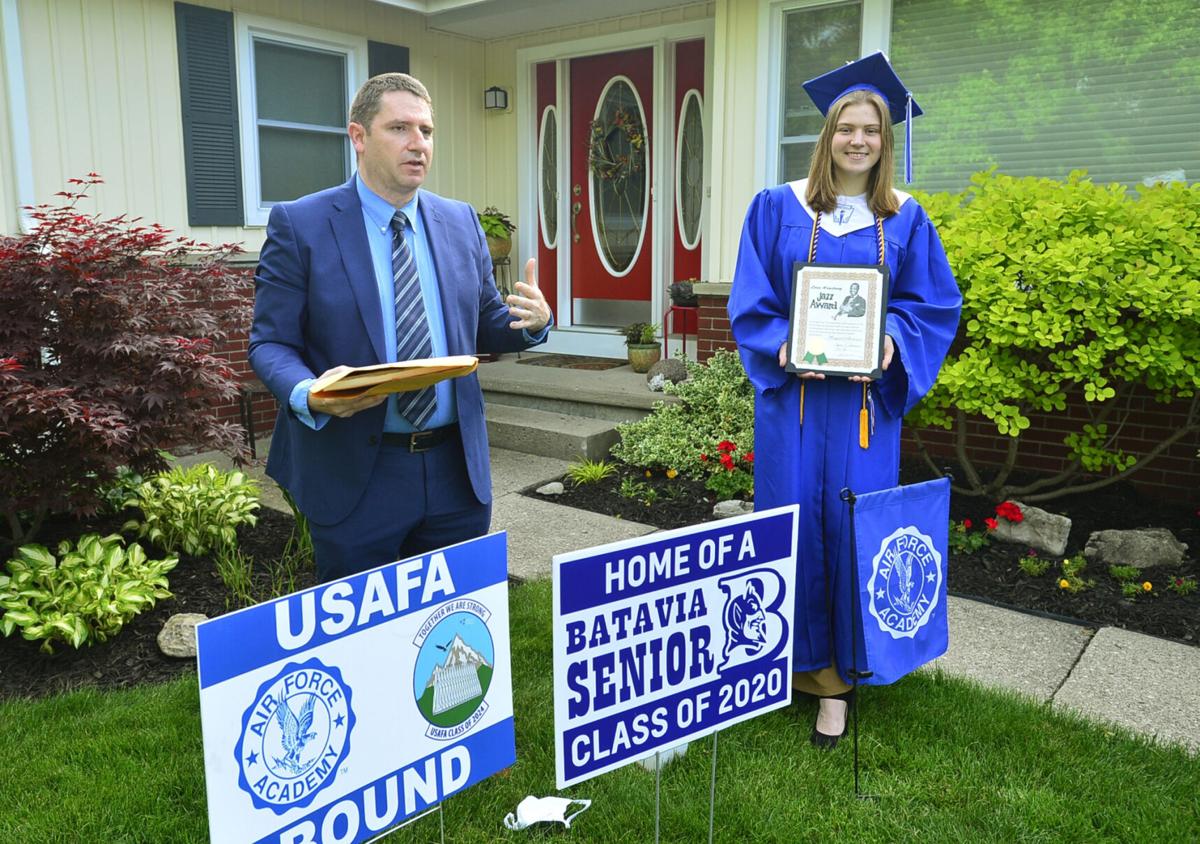 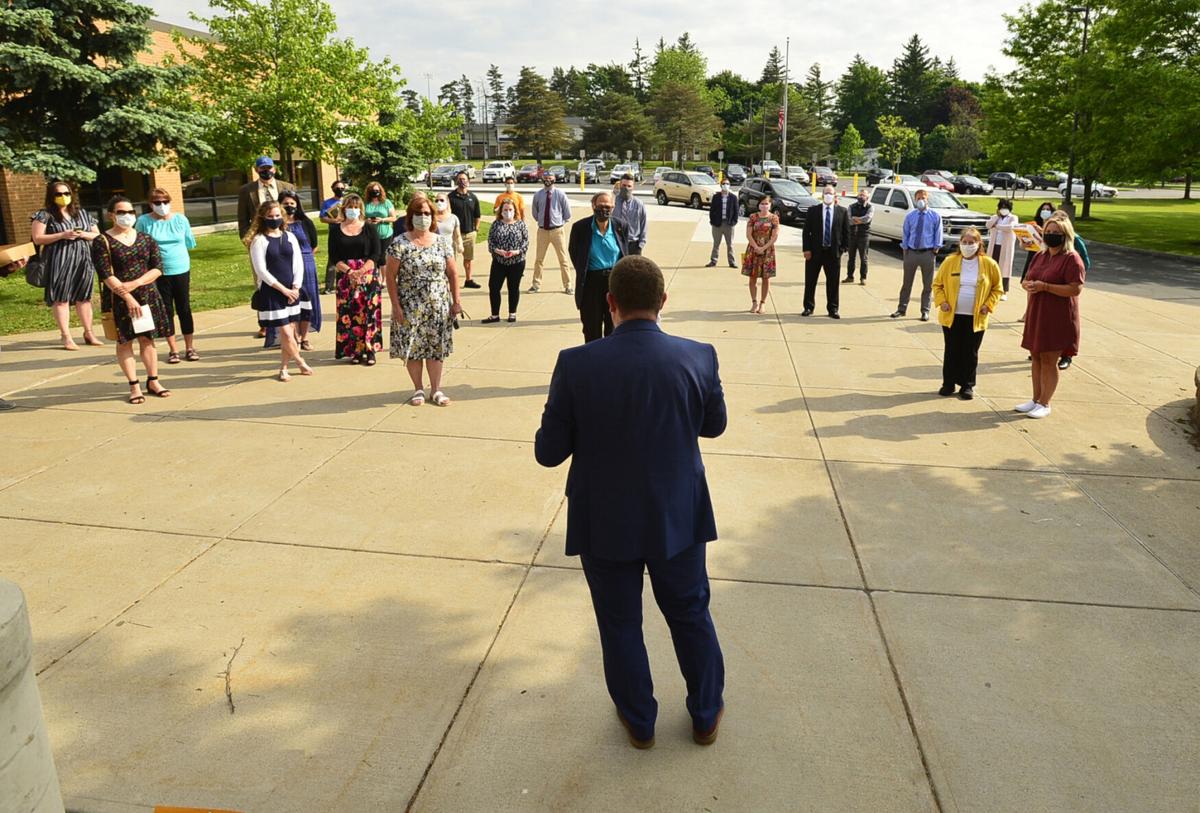 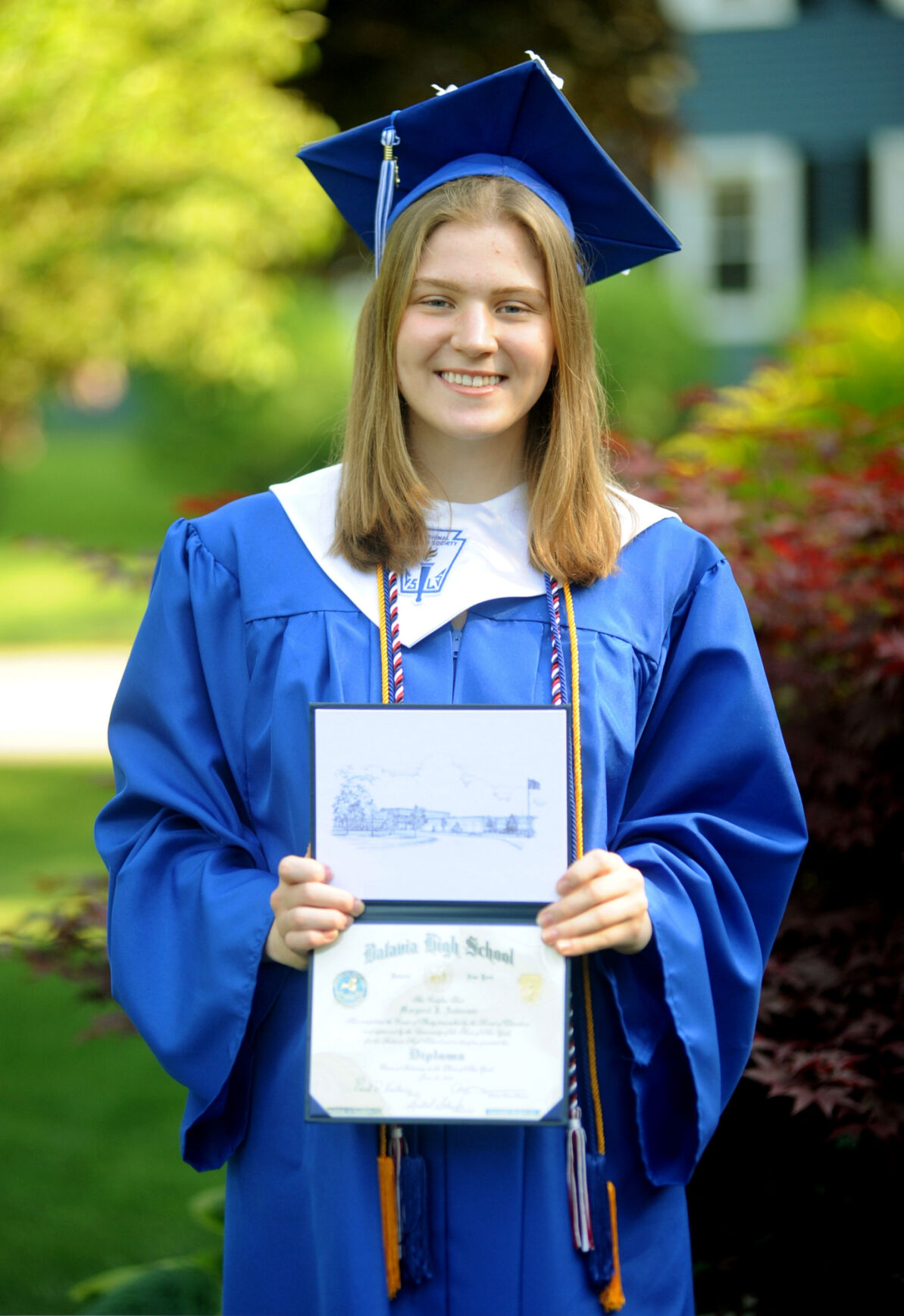 Mark Gutman/Daily NewsMaggie Andersen said she was grateful to get her diploma early. 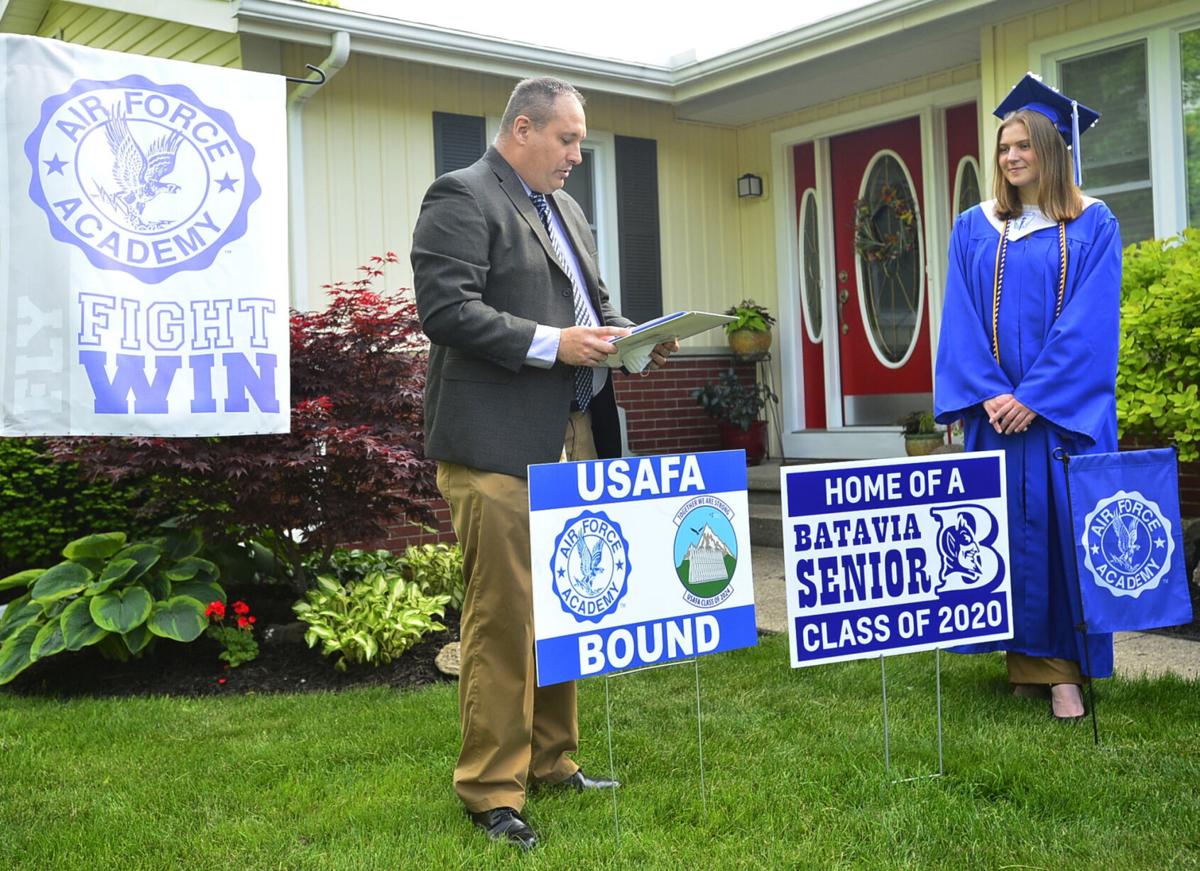 Mark Gutman/Daily NewsMaggie Andersen said she was grateful to get her diploma early.

BATAVIA — It was an afternoon of awards presentations for about 75 Batavia High School students, but it was a graduation — of sorts — for one.

As High School Principal Paul Kesler, along with teachers and other community members fanned out Wednesday to present awards to the students who had earned them, one of the houses Kesler and teachers visited was Maggie Andersen’s.

Kesler said there were a few reasons he was going to Andersen’s house.

“She’s won a number of awards, but she’s also graduating tonight,” he said. “Maggie has been accepted at the Air Force Academy, but she needs to start there before our actual graduation date. We’re excited to give her her diploma as well as the awards she’s won tonight.”

Maggie, the daughter of David and Kristine Andersen, was dressed in a cap and gown, and ready when the contingent from the school arrived. Her brother, Campbell, who will be a senior at the Air Force Academy next year, was there, too. Maggie’s father, David, was unable to be there.

Maggie Andersen said she was grateful that the school took the time to present her diploma and awards.

“I wasn’t expecting to even be at graduation, much less have all these teachers and administrators come here and try to celebrate this with me in person,” she said. “I’m just so grateful.”

Kristine Andersen said she was proud and thankful that Wednesday’s celebration was able to take place.

“The Batavia school district’s been wonderful to my children since they were young,” she said. “They’ve never failed, they’ve always stepped up to whatever situation was happening and supported our children, whether it be for extra academics or different activities ...”

Kristine Andersen complimented the district on being able to do something special for the class amid the situation everyone is in right now.

Maggie said she will be in processing at the Air Force Academy in Colorado Springs, Colo., on June 25. Processing takes about three weeks, after which she will be in basic training for about six weeks.

“After that, I will have four years of a relatively normal college life. It will be as though I’m in ROTC all the time other than two or three days a week,” she said. “There are pretty stringent military policies, such as keeping our room clean at all times, not really going out on the weekend. I will have to wear a uniform every day. After four years, after I graduate, I will be enlisting as an officer in the Air Force. I will have a mentor service period of five years and a given job, if I chose, after that.”

As far as the end of this school year, Maggie said the class missed out on a lot, such as all the spring sports and the prom.

“I think the school did as much as they could possibly do with the situation they were given. They’ve been so helpful in trying to connect all the students and all the teachers and make sure everybody’s just doing the best they can, given the situation,” she said.

Kristine Andersen joked that with both Campbell and Maggie in Colorado Springs, she and David might move there, too.

Campbell said he was looking forward to Maggie’s arrival at the academy.

“I’m sure it will be great for me to have a family member there and good for Maggie because she’ll be in a new environment,” he said. “Before I graduated from high school (in 2017), both me and my sister were thinking about going there. We’re pretty close. I have told her a lot about it. I wasn’t consciously trying to guide her toward this decision.”

Kesler said there would traditionally have been an awards assembly Wednesday at Batavia High School.

“Obviously, that’s not going to work this year. We had to decide whether we were going to try to do it online,” he said. “Then, we just had the idea of ‘Why don’t we just bring them out in person?’ It gives the kids a little bit of a personal experience. We have six groups of teachers that are going out and presenting the awards. We’re excited to do it tonight.”