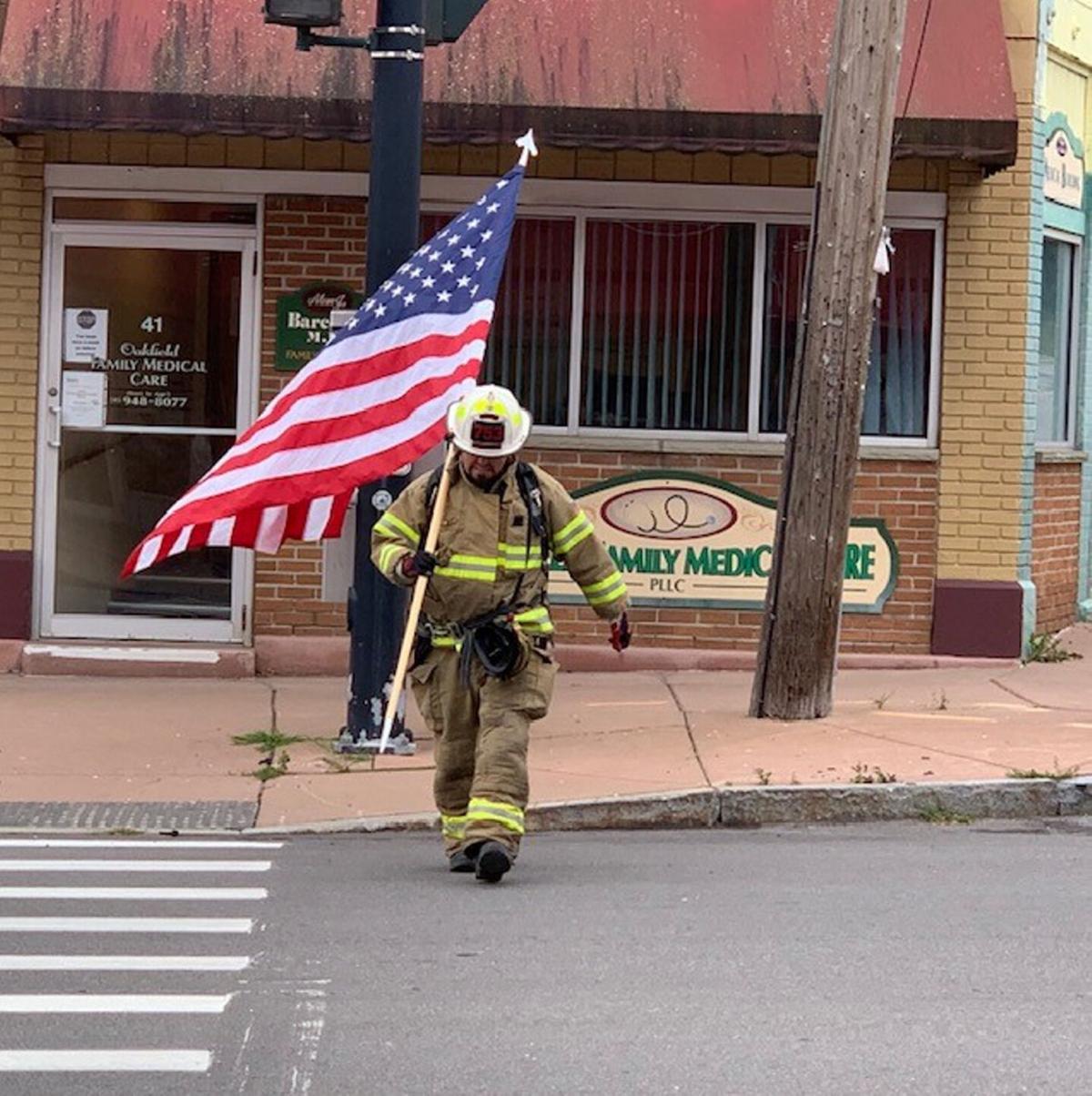 PHOTO COURTESY OF CAROL HILBURGERAn Oakfield firefighter, crosses the street on his tribute to the New York City firefighters who lost their lives responding to the Sept. 11, 2001, terrorist attacks. 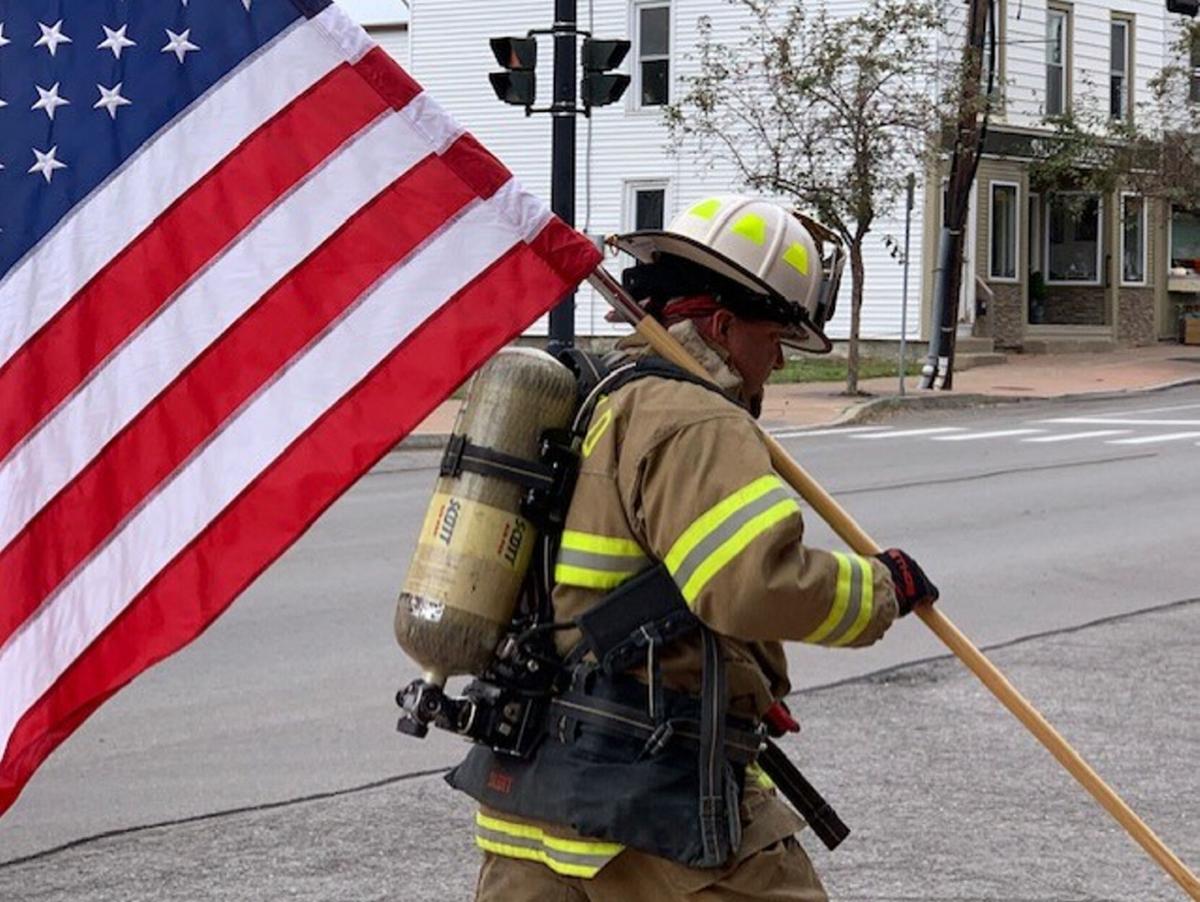 PHOTO COURTESY OF CAROL HILBURGER The six-year member of the department walked about six miles - covering all the village streets.

PHOTO COURTESY OF CAROL HILBURGERAn Oakfield firefighter, crosses the street on his tribute to the New York City firefighters who lost their lives responding to the Sept. 11, 2001, terrorist attacks.

PHOTO COURTESY OF CAROL HILBURGER The six-year member of the department walked about six miles - covering all the village streets.

OAKFIELD — He was walking the streets of the village, not for any attention or recognition it brought him, but to show support for the firefighters who gave their lives on 9/11.

On the 19th anniversary of the Sept. 11, 2001, terrorist attacks on the World Trade Center and the Pentagon, the six-year member of the Oakfield Fire Department walked along Friday in his turnout gear and carrying an American flag. He told fellow firefighters he didn’t want to be mentioned by name, said Fire Chief Sean Downing.

“He was up this morning and said he was doing exercises down at the gym in Oakfield. He was on one of the pieces of equipment, the step climber and did 1,980 steps to simulate climbing up the towers in honor of the firefighters that died in 9/11,” Downing told The Daily News. “He then decided he was going to put his gear on and walk every street within the village of Oakfield, which was about 6 miles worth. So, he did hit every street and basically did it to show solidarity in support of the firefighters that died on 9/11.”

“He said, please do not put my name on it. He didn’t even know that anyone had taken a picture of him,” the fire chief said. “He doesn’t want anybody in the fire department thinking he was doing it for any recognition.”

Downing said the firefighter didn’t even know his picture was on The Daily News Facebook site until it was pointed out to him.

“I’d say he’s been with the department for around six years. He’s also a member of the Oakfield Honor Guard,” Downing said. “That (walking in tribute to the firefighters) fits right into his personality. That’s just the type of individual he is.”

There were 343 New York City firefighters who lost their lives on 9/11.

“Wearing the turnout gear which would have been the same as the firefighters who walked up the steps and climbed the towers,” Downing said.

Downing said the firefighter has done things privately to pay tribute to the fallen firefighters, but added, “To my knowledge, ... this is the first I’ve known of him to do it out in public.”

The fire chief said Oakfield firefighters didn’t have anything planned for this year in observance of 9/11. Things will be different next year.

“We would definitely be planning something for the 20th anniversary. We would be doing something within the village,” he said.

“I had co-workers who were in the second tower when the first tower was struck,” he said. “I always reach out to those individuals on a personal level. I just reach out to them and remember them on that day and give thanks that they’re alive, and for our friendship. I send them emails and private messages through Facebook. One of them lives in Georgia and there’s another one that lives in Leeds, England.”

Downing said the two co-workers, who were at the World Trade Center on business, got out of the tower, but couldn’t get through right away on phones to tell anyone they were OK.

“They had to walk over one of the bridges and they were finally able to get a landline and call in and tell us they were doing well,” Downing said.