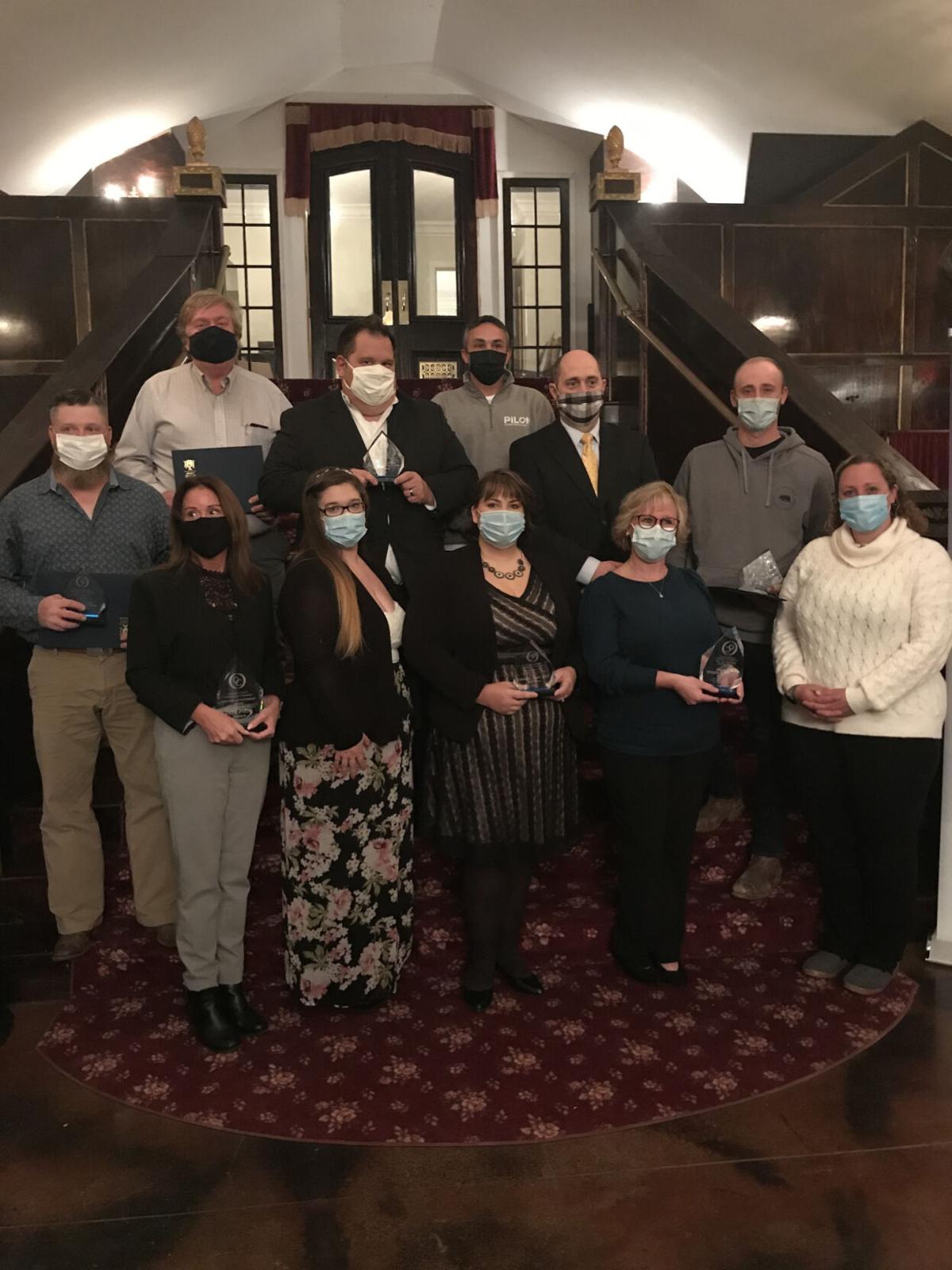 Mallory Diefenbach/Daily News Those who accepted the awards Thursday night. 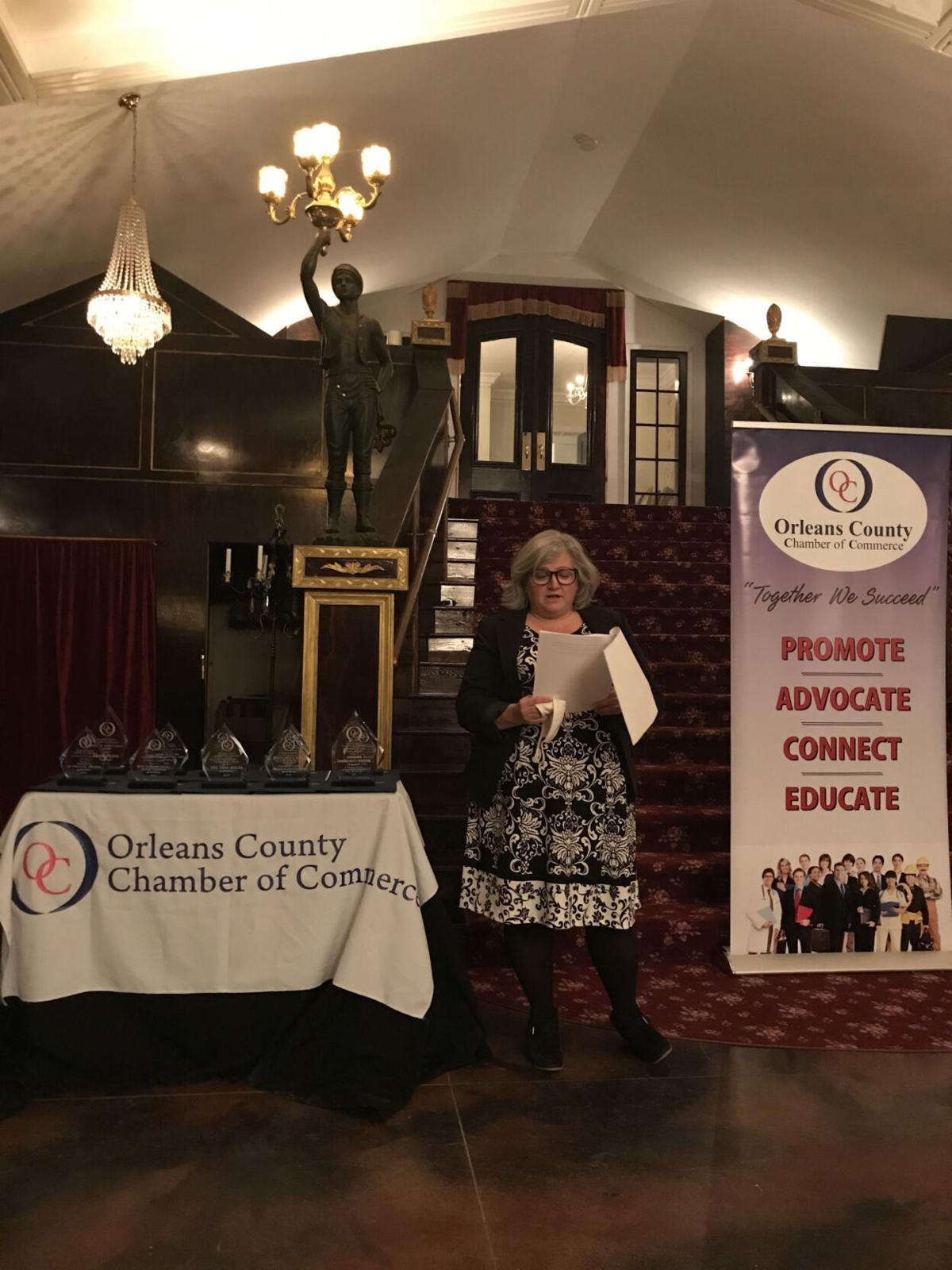 Mallory Diefenbach/Daily News Those who accepted the awards Thursday night.

ALBION — While COVID-19 may have stopped the traditional dinner which went with it, on Thursday Orleans County Chamber of Commerce presented its 2020 Chamber Awards.

“Tonight we are here to spotlight just a few successful businesses as with great pleasure as they are the businesses and individuals who had such a positive impact in Orleans County in the past year,” said Darlene Hartway, executive director of Orleans County Chamber of Commerce. “This year has been a trying one to say the least. For businesses not only in our county, but around the globe. I truly feel that any business that still has its doors open deserves an award this year.”

They exist to improve the health of the communities they serve by providing equal access to quality health care services at the right time, in the right place, with the most efficient use of resources. Every day this is their mission.

Owning and operating Pilon Construction Co. for over 50 years, Fred Pilon is an Orleans County lifelong resident who took over the company from his father in 1972, when he was 25. Over the years he married and had six children, and the construction company requires a significant dedication of long hours and tenacity to keep the doors open. Not only does three of his children work with the company, but his business has grown significantly over the years, beginning in the 70s working with farmers to dig and install irrigation systems.

“The majority of the last 30 years he specialized in installing Municipal Waterlines across Western New York. If you drink public water in Western New York it probably passes through lines installed by Pilon,” said Dr. Daniel Schiavone, last year’s winner of the Lifetime Achievement Award.

NEW BUSINESS OF THE YEAR — The Tree House

The Tree House is an early childhood enrichment and event studio specializing in preschool and toddler programs. It was opened in the same week the global pandemic was declared.

“The Tree House is built on an idea childhood is sacred, messes are mandatory and learning is fun,” said Courtney Henderson, owner and founder of Milk and Honey — last year’s New Business of the Year winner. “They did a lot of learning this year but like many, not all of it has been fun.”

Henderson said she was with Michelle Waters, owner, painting late at night for Waters first class that morning. One class got in before everything got shut down. However, the Tree House still stands, stronger than ever.

Sam’s Diner was founded in 1978 by Sam Gitsis in Holley. The diner was passed down to brother and sister, George and Vicky, and since then has been an anchor in the Village of Holley.

“Throughout the COVID pandemic, George went out of his way to make sure that his customers were taken care of efficiently and safety,” said David Gagne, vice president of the Orleans county Chamber of Commerce. “He installed air purification systems and dividers, all at great expense to ensure his customers health and safety.”

For several years George has supported the Holley School’s baseball team’s fundraiser by giving a 10 percent discount to anyone that has a “Hawk Card.” It has become a Holley tradition for high school seniors to go to Sam’s Diner for the first day of school breakfast. This year they were unable to due to COVID restrictions. George generously paid for breakfast pizzas for the entire senior class from the neighboring Crosby’s store. He is the first to donate to many of the Holley community organizations.

Navarra’s Farm Market and Greenhouses came alive at its current location on Eagle harbor road in 1988. Jim and Rita Navarra first started the greenhouses and farm market on the corner of Gaines Basin Road and Route 31, and from there it moved over in 1988 and three of the first greenhouses went up.

“Navarra’s Farm Market and Greenhouses has always been family ran and oriented. Jim and Rita ran the greenhouses together along with their son, Paul. Joan, Jan and Jim helped during the busiest time of the seasons. Markus, Amanda and sister, Jenna, grew up helping the family whether it was transplanting the plugs, watering, helping customers or loading the trucks for market. They were always there to aid in the family business,” said Diane Blanchard, manager-administration for the Orleans County IDA. “Unfortunately, Uncle Paul passed away in March 2017. In the middle of his passing they lost all six greenhouses to a windstorm. (They) had to quickly pull together on a united front to keep the season going.”

When Markus and Amanda became partners of the Farm Market and Greenhouses, they switched their entire market set up for the public, put in a building with gifts, built a new greenhouse which houses their classes and orders. This year Navarra’s Farm Market and Greenhouse was featured on the cover of the Harris Seeds Ornamental Growers catalog as they are one of the very few greenhouses left in Western New York to start almost all of their plants from seed.

With the ribbon cutting of Holley Gardens on Tuesday, the old Holley High School has found new life as a mixed-income, mixed-residential, and commercial development.

Originally constructed in 1931, the three-story Neo-Classical brick building served as the village’s high school until the mid-1970s. It sat unused in the decades since closing. After careful rehabilitation, including the preservation of original architectural details, the building now shines again as an anchor in the Village while providing homes to seniors.

The school’s original auditorium was kept largely intact to be used as a public meeting space for the village’s board meetings and other public forums. The area beneath the balcony was renovated to house the village’s administrative offices.

BUSINESS PERSON OF THE YEAR — Brian and Larissa DeGraw, Meadworks

Bryan and Larissa started 810 Meadworks in November 2014 to be a place to come and enjoy yourself for a short time. A place to people to connect and enjoy one another.

“Six years in business is something they’re very proud of. This year has been one where adaptation is necessary like never before,” said Greg Reed, executive director of the Orleans County YMCA and last year’s winner of Business Person of the Year. “Even with all the struggles and challenges this year has brought they are happy to have received two International Mead medals.”

They have received much inspiration from their unending dedication to the family environment their business embraces. While 2020 has been a challenge they are hopeful for big things next year.

In the spring 1988, Mary Janet Sahukar recognized a serious need in the community and for families caring for the seriously ill who had nowhere to turn for support. Through her effort and grassroots support, 13 community professionals and neighbors came together. In December 1989, People for Orleans Hospice Support Agreement was officially born. This was followed by a New York state certification in 1994 when they changed to the Hospice of Orleans County.

“The mission of the Hospice of Orleans is to embrace those facing advanced illness with optimal levels of comfort, compassion and expertise,” said John Burris of Hands 4 Hope — winner of last year’s Community Service Award.

Gatlen and Danielle Ernst purchased the marina in 2014. At the time there were two separate marinas in Point Breeze. Gatlen combined the staff and customers of these competing marinas and made them flow together.

“Now, this year, they had this entirely different situation which all of us experienced with COVID. Not being to have your business doors open is devastating,” said Amy Sidari, owner of The Cabaret at Studio B — last year’s Hidden Gem winner. “He did keep up his positive onset and how he’s going to move forward. He had already survived the floods, so he was already in the mindset he could survive this again too.”

Once Gatlen received word in April he could open back up, he began putting boats in the water.

Kelly Kiebala, director of Orleans Job Development, presented this award to Claims Recovery Financial Service. The business was established in 2002 and the employee 183 people.

“Claims Recovery Financial Services and indeed the entire post-foreclosure mortgage industry has undergone a significant transformation as a result of the pandemic during the course of this year,” she said. “(CRFS) both internally and that of (their) clients has had to lean heavily on an agile approach to deal with significant ambiguity, related to their immediate future business volumes, and how (they) shaped the landscape of work for our staff.”