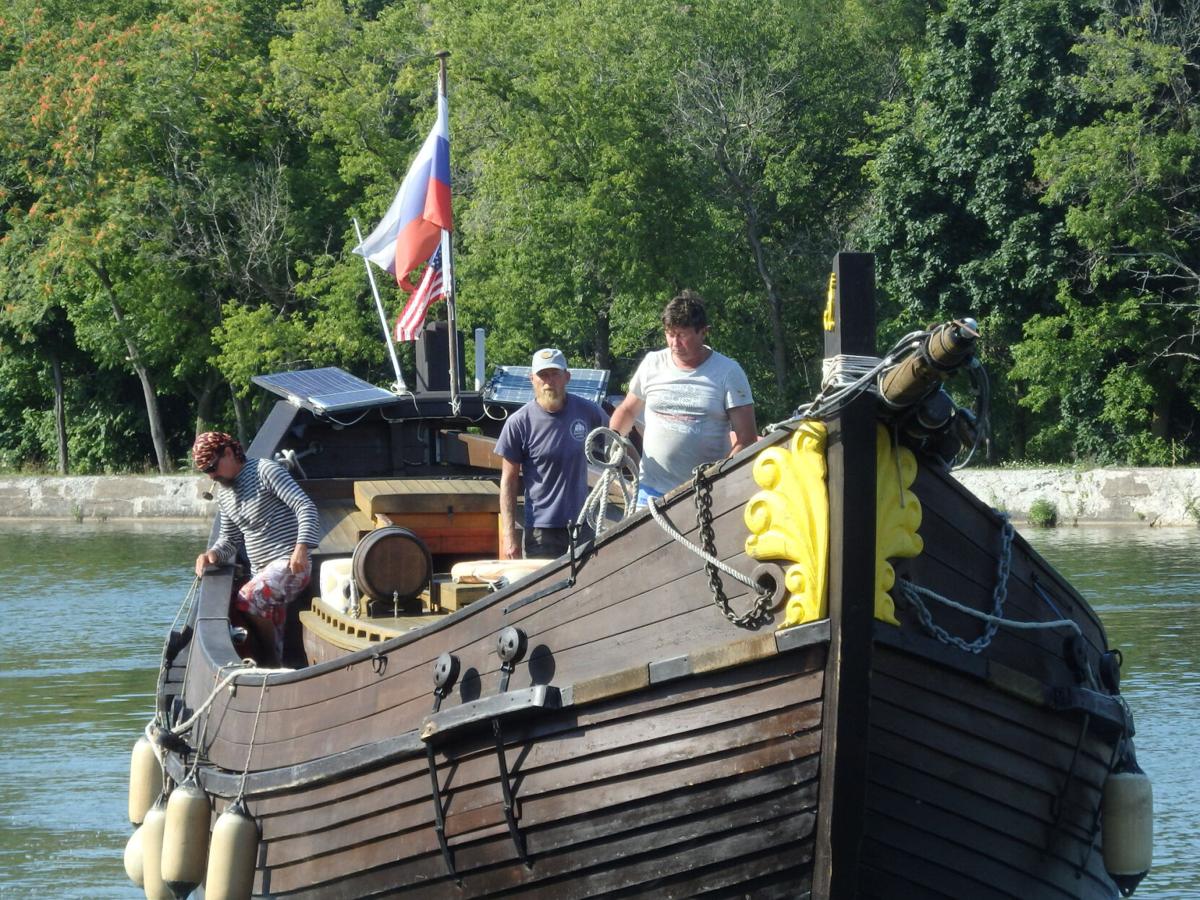 Sergey Sinelnik, center, and crew prepare to dock their boat Pilgrim on Friday evening in Medina. The boat was passing through the Erie Canal as part of a round-the-world voyage. 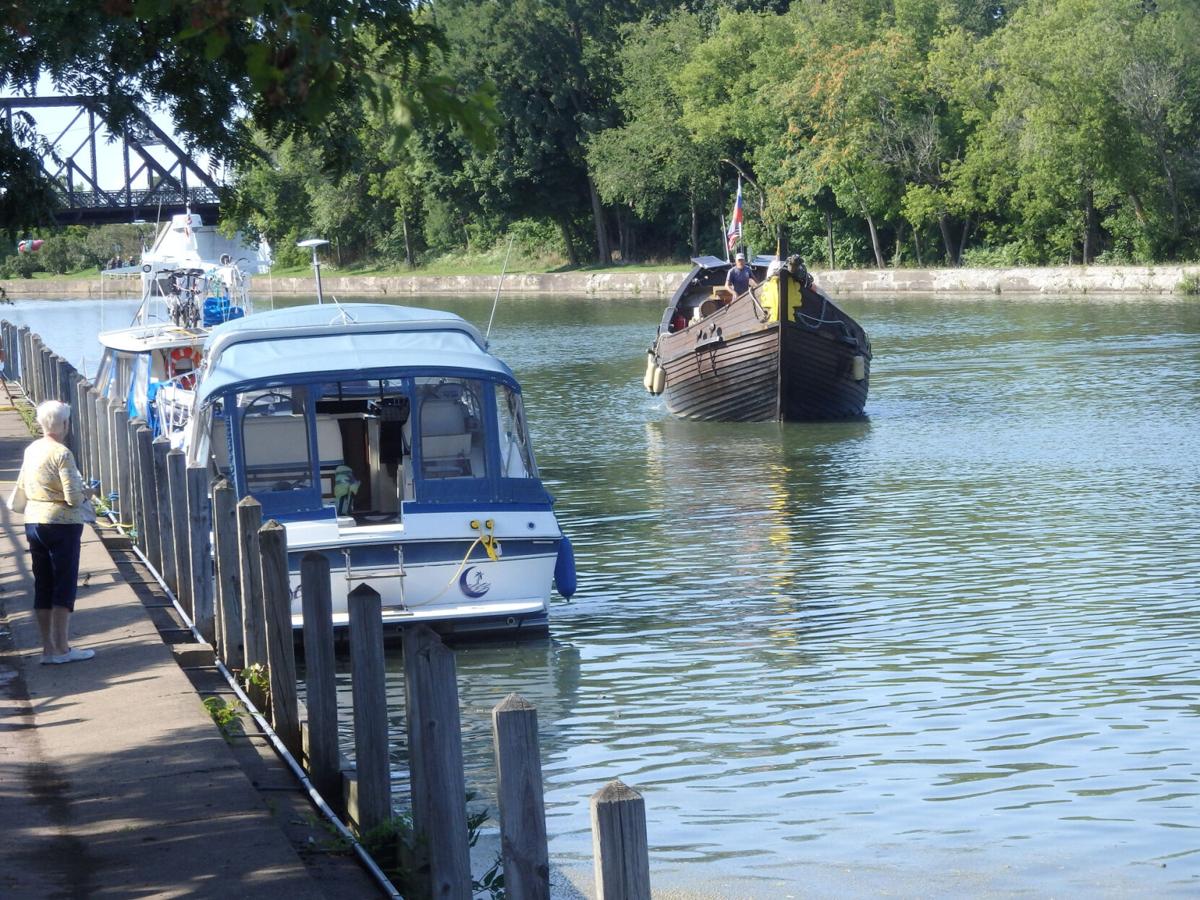 The boat Pilgrim approaches for docking Friday at the Canal Basin in Medina. The ship is an exacting replica of an 18th century Russian boat. 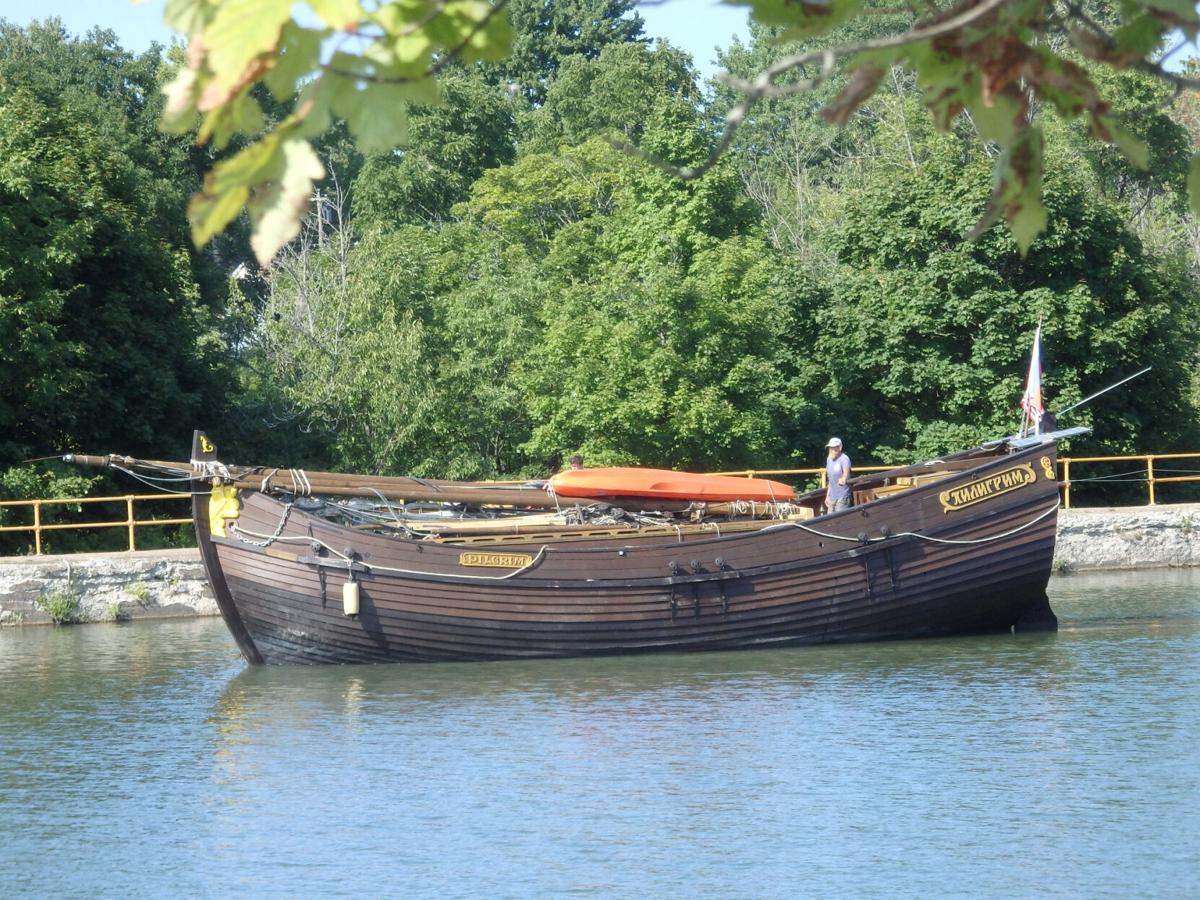 The Pilgrim passes through Medina on its way through the Erie Canal. The boat’s mainmast has been temporarily removed so it can navigate low clearances on the canal system.

Sergey Sinelnik, center, and crew prepare to dock their boat Pilgrim on Friday evening in Medina. The boat was passing through the Erie Canal as part of a round-the-world voyage.

The boat Pilgrim approaches for docking Friday at the Canal Basin in Medina. The ship is an exacting replica of an 18th century Russian boat.

The Pilgrim passes through Medina on its way through the Erie Canal. The boat’s mainmast has been temporarily removed so it can navigate low clearances on the canal system.

MEDINA — If you spend any time near the Erie Canal in summer, you’ll see your share of boats.

But the crowds that lined Canal Basin on Friday evening were anticipating something truly different from the typical traffic.

It appeared soon enough — a hand-built example of 1700s Slavic boat design as the historic vessel Pilgrim cruised into view. Captain Sergey Sinelnik and his crew of friends and family had already sailed thousands of miles and they were passing through Orleans County as part of their continuing around-the-world voyage.

“How do you say ‘Hello’ in Russian?” a man in the crowd asked.

“Welcome to Medina!” a woman called as the Pilgrim turned for a quick mooring.

Sinelnik, 46, is a lifelong adventurer, traveler and nautical enthusiast. He and the Pilgrim have been on the move for the past two years.

They’re on their way west to Duluth.

One might call the Pilgrim and its journey a labor of devotion. Sinelnik, and his twin brother Alexander, have undertaken numerous adventures, whether traveling on an around-the-world expedition on Ural motorcycles, sailing clockwise around Australia, or traversing 1,000 km of the Sahara Desert on foot.

The Pilgrim is an exacting replica of an 18th century Russian sailing boat. It was constructed by Sinelnik and friends, featuring sweeping, graceful lines and Cyrillic placards bearing its name.

It took two years to raise the funds for the boat, followed by another two years for its construction.

“Many people from other countries helped me build this boat,” he said. “Many people, many friends. About 100 people helped — volunteers.

Sinelnik began the Pilgrim’s journey with his wife Marina and their sons Sviatoslav and Yaroslav. They’ve since returned to Russia but continue to provide support from their home — the city of Petrozavodsk, about 350 miles northeast of St. Petersburg and roughly comparable to Buffalo in size.

They set out from Russia before crossing the Atlantic, making their way to Florida, and then moving along the Eastern seaboard.

Sinelnik and family traveled 10,000 miles, and Marina and their sons returned home after Baltimore.

Sviatoslav, 16, is now in college, Sinelnik said. Marina’s afraid of water but was persuaded to go — she was adept on the ocean and it was a valuable experience for their children.

They lived aboard for two years. Friends and family have rotated in and out as crew throughout.

Even with its mainmast removed temporarily for passage through the canal, the Pilgram created a unique vision as it approached for docking in Medina. One of Sinelnik’s crew wore a distinctive, striped Russian sailing shirt, and the boat flew both the Russian tricolor and the American flag.

Sinelnik and crew were on a schedule, so their stay was short. They talked briefly with some residents — the Russians took photos of the Canal Basin and people took pictures of the boat — before heading to Middleport, an ideally quiet location where they planned to stay the night.

Janet Slack and her granddaughter Lainey Powell, 4, had been attending the adjacent classic car show but walked down to get a better look.

“It’s really neat,” Slack said. “I wish I could read what it says on (the Cyrillic placards. “I just was told they were going around the world.”

As for the future?

Sinelnik and crew will try to head for Seattle, possibly having the Pilgrim hauled by truck over the mountains beforehand. Then they may make their way up to the Aleutians and maybe Kamchatka region of eastern Russia.

“I will decide because have a small engine,” he said. “It’s only 40 horses power — too small for ice and the north ocean ... We will decide our way step-by-step.”

And with the day about to fade, they set out for their next destination and their place to spend the night.