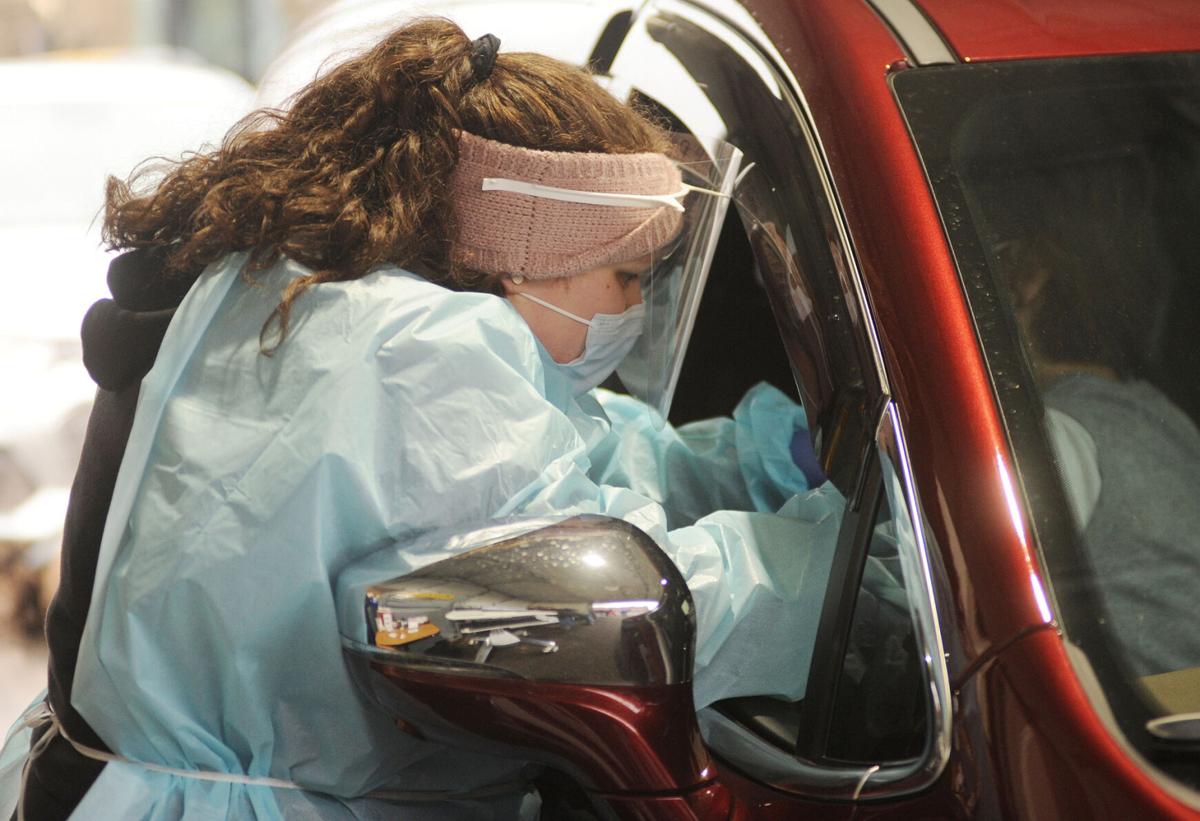 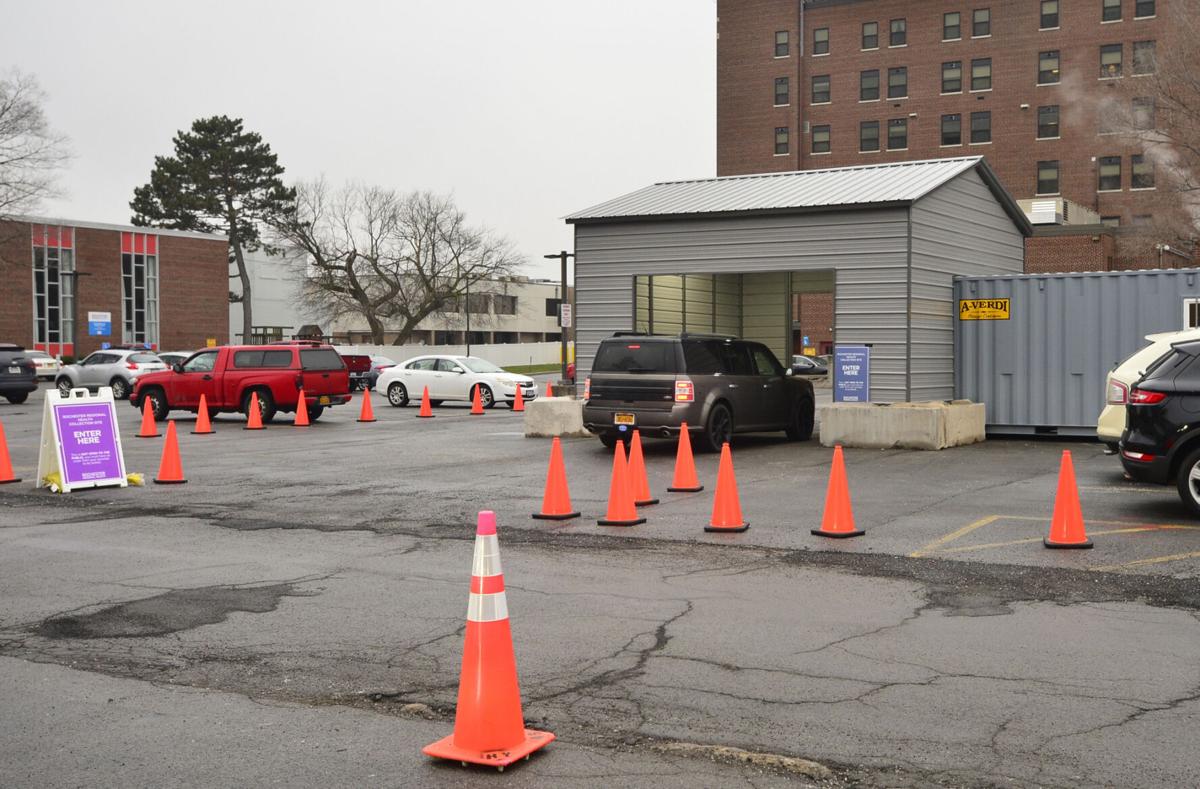 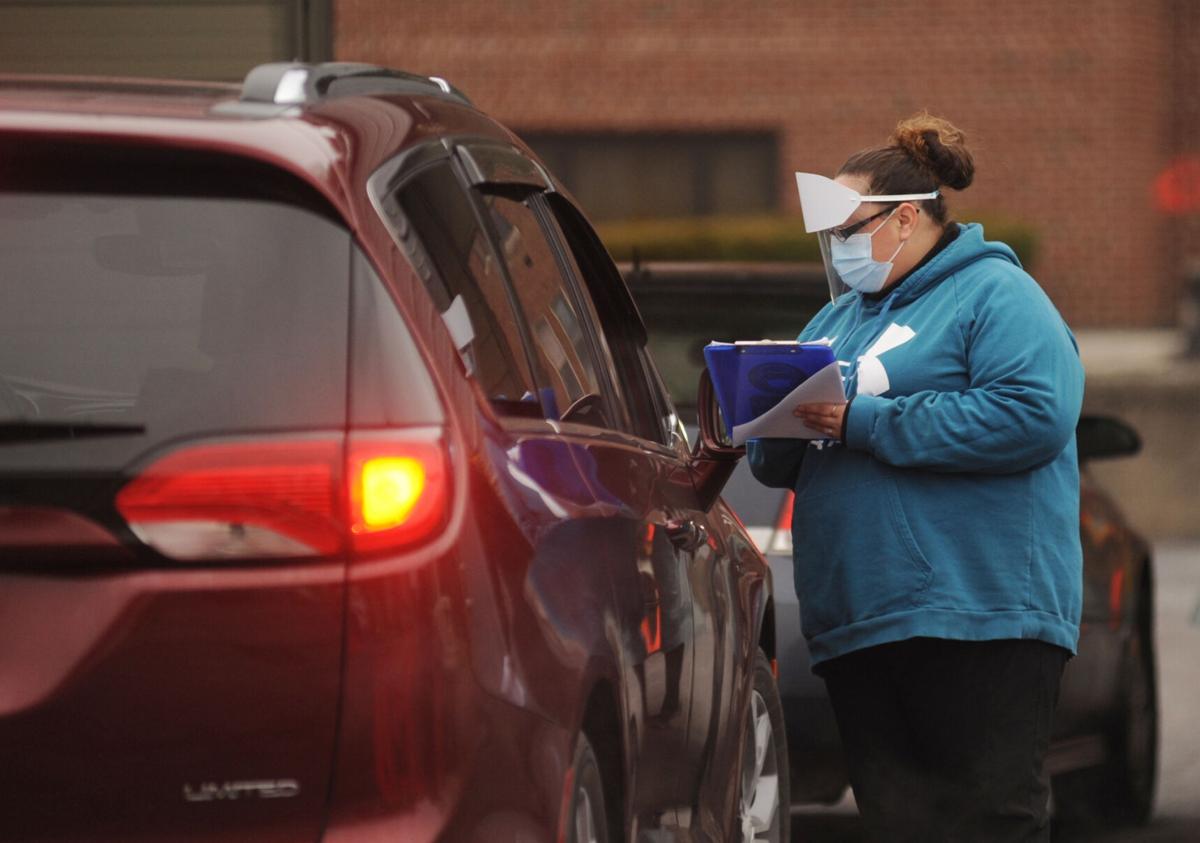 Mark Gutman/Daily News A drive thru vaccination site for residents whose primary care physicians are affiliated with Rochester Regional Health opened Thursday at the Jerome Center in Batavia. 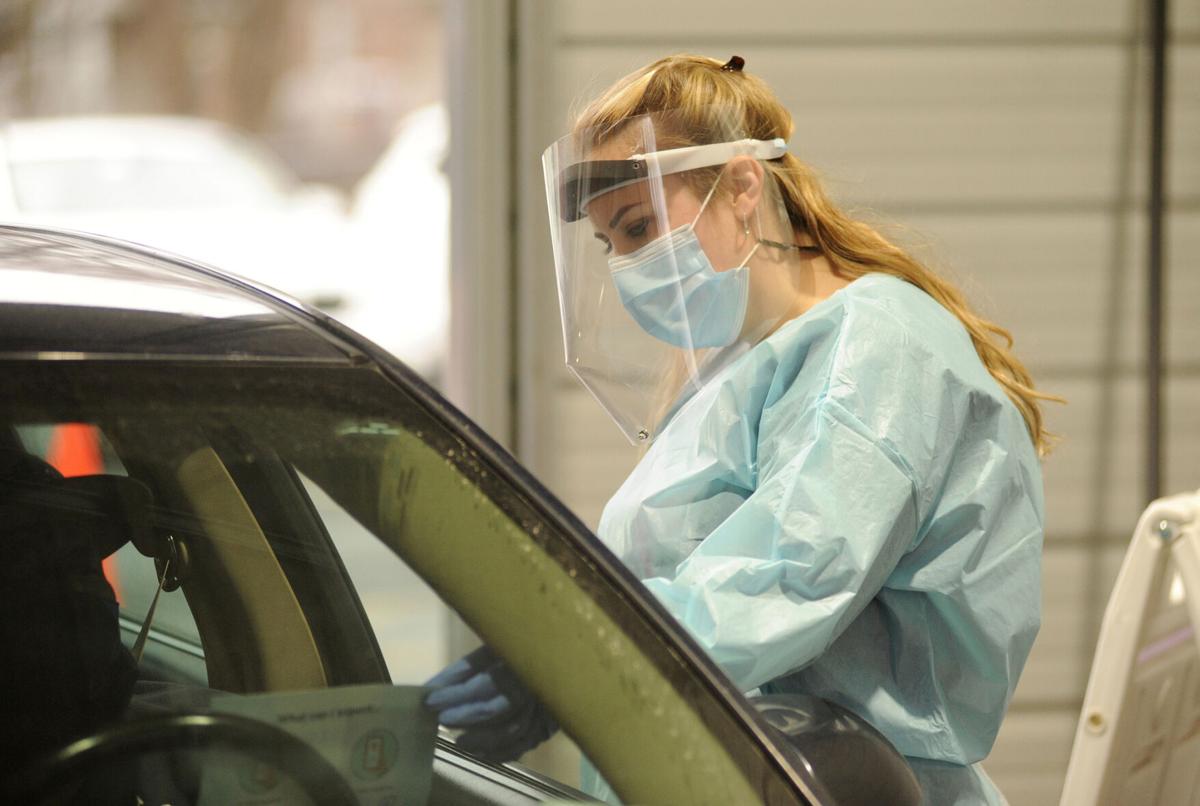 MARK GUTMAN/DAILY NEWSMore people come to the Jerome Center for testing or a vaccine. 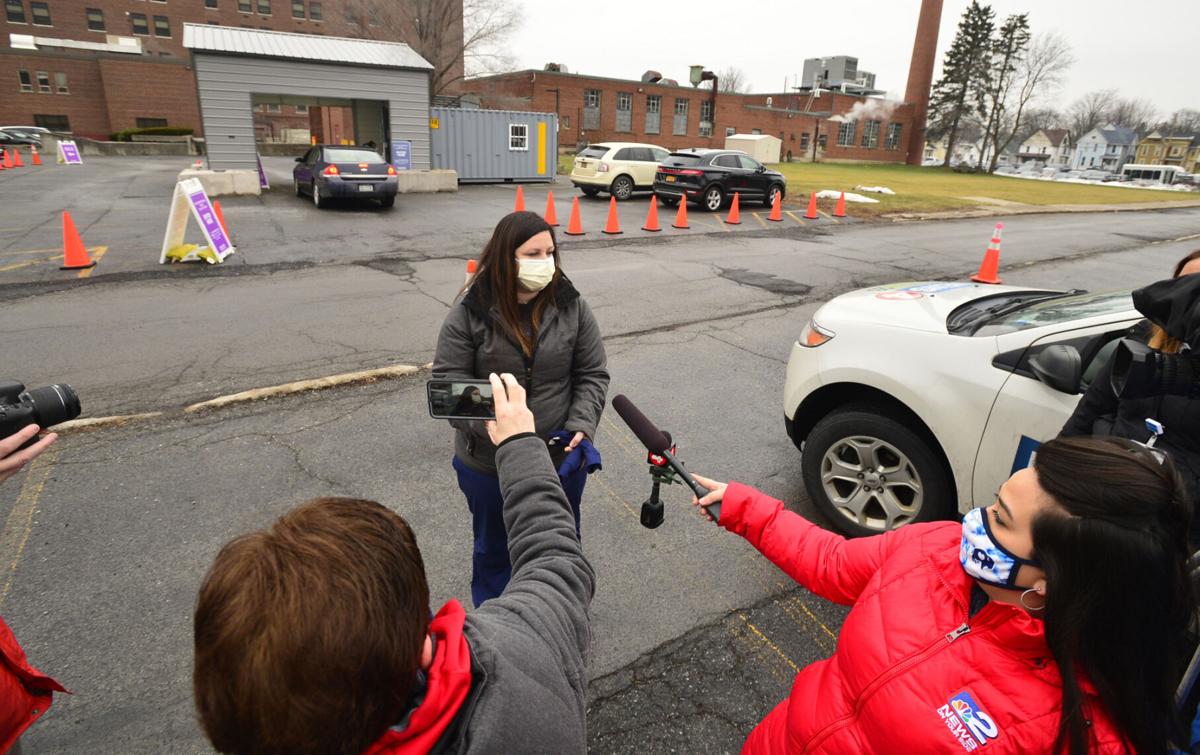 MARK GUTMAN/DAILY NEWSTiffany Smith, director of nursing at RRH, speaks to reporters on Thursday morning on the first day of vaccinations for patients.

Mark Gutman/Daily News A drive thru vaccination site for residents whose primary care physicians are affiliated with Rochester Regional Health opened Thursday at the Jerome Center in Batavia.

MARK GUTMAN/DAILY NEWSMore people come to the Jerome Center for testing or a vaccine.

MARK GUTMAN/DAILY NEWSTiffany Smith, director of nursing at RRH, speaks to reporters on Thursday morning on the first day of vaccinations for patients.

BATAVIA — Ruth Platten of Batavia didn’t expect to be the first patient through to receive her first dose of a COVID-19 vaccine Thursday morning at the Jerome Center.

Sitting in the car afterward, next to her husband, Calvin, she said the process of getting the shot went well.

The Batavia resident said she was worried, to a certain extent, about getting the vaccine, but added, “We were cautious about where we went and what we did, so we kind of felt safe, We didn’t just go into any stores or wander all over town.”

Ruth said she’s not concerned about effects from the vaccine.

“I have a niece and a nephew that are doctors and they both had it, so they kind of led us through it all and told us what to expect,” she said. “That’s been a big help. We go by what they say.”

Tiffany Smith, director of nursing for Rochester Regional Health, said 50 appointments had been made for Thursday at the Jerome Center Urgent Care, with 50 more set up for today.

RRH was holding its first community vaccine drive-thru clinic at Jerome Center Urgent Care facility, which was available to RRH patients in the 1B priority group who are ages 75 or older.

“The health systems reaching out to them directly to schedule appointments,” Smith said.

She said patients were driving or being driven through the clinic area. A nurse checked to make sure the patient was on the list of appointments. The nurse screened the patient, took his or her temperature, then the patient got a vaccination before pulling around to another spot, where another nurse would sit with the person for 15 to 30 minutes to make sure there were no adverse side effects or reactions.

“We definitely, as a health system, decided it was important to get out to these rural communities to make sure that we offered some of these clinics to this community, especially the older population that is a little bit more vulnerable, so I think it’s really important. It’s the light at the end of the tunnel,” she said.

Smith said RRH plans to schedule more clinics in the coming weeks, but is waiting on another allotment of vaccine.

How will RRH help the seniors who can’t drive themselves to the drive-thru clinic?

Of the 50 appointments Thursday, Smith said, “It is kind of frustrating. We wish we could vaccinate everybody. However, we have a certain amount of allotment. That allotment changes week by the week. As soon as we get more allotment in, We try to get it out and people vaccinated as quickly as possible. We’re using them as quickly as we get ‘em.”

What about people who are hesitant to take the vaccine?

“I have friends and family that are concerned about it and patients that come up,” she said. “Really, you’re just using the research and the facts behind it and really talking through that with them.”

Smith said RRH anticipates having enough for the second dose of the vaccine following administration of the first dose this week.

“This group that is coming through today will be back in about four weeks for their second-dose. That (the second dose) gets shipped in allotments,” she said Thursday.

What has life been like for Ruth Platten over the last 10 months since COVID arrived in the GLOW region last March?

“Terrible. Lonely. Boring. Don’t go anywhere. Just stayed in the house or ought in the yard, Didn’t go into stores,” she explained.

Now that she got her first dose of the vaccine, Ruth said, “We might be more apt to go out, as soon as my husband gets his dose of the shot. He hasn’t had it yet.

“We want to go to Arizona. We have a grandson we haven’t seen. He’s 8 months old. We’re anxious to get the shot so we can go out to visit,” she said.

The Plattens might be more able to freely wander into a store, Ruth Platten said.

The second person to get the vaccine Thursday was Norman Gibson, 87. When asked how he felt afterward, he replied “Very good,” while pumping his fists in excitement.

His wife, Evelyn, said he was relieved.

“He’s been home for five months,” she said.

Norman answered, “I just want to get it to be safe.”

“We wanted everybody to be well,” Evelyn Gibson said.

Evelyn had a ready answer when Norman was asked if there’s anything he looks forward to doing after getting the first dose of the vaccine.

“See people!” she piped up.

Evelyn Gibson said she hasn’t gotten a call about an appointment for the vaccine.

The third to get his vaccine Thursday was Thomas Preston, 80, of Batavia. Following the shot, he declared, “I’m going to go home, I’m going to watch TV and take a nap! That’s what you do when you’re 80.”

He said he wanted to get the shot to be safe. When asked what he would say to people who don’t want the vaccine, he replied, “I think they’re foolish. It’s free. Get it done.”

Officials trying to make the best of COVID vaccine supply

Vaccine rollout will be slow

With the recent influx of who is eligible to receive the COVID vaccine, Genesee County offic…