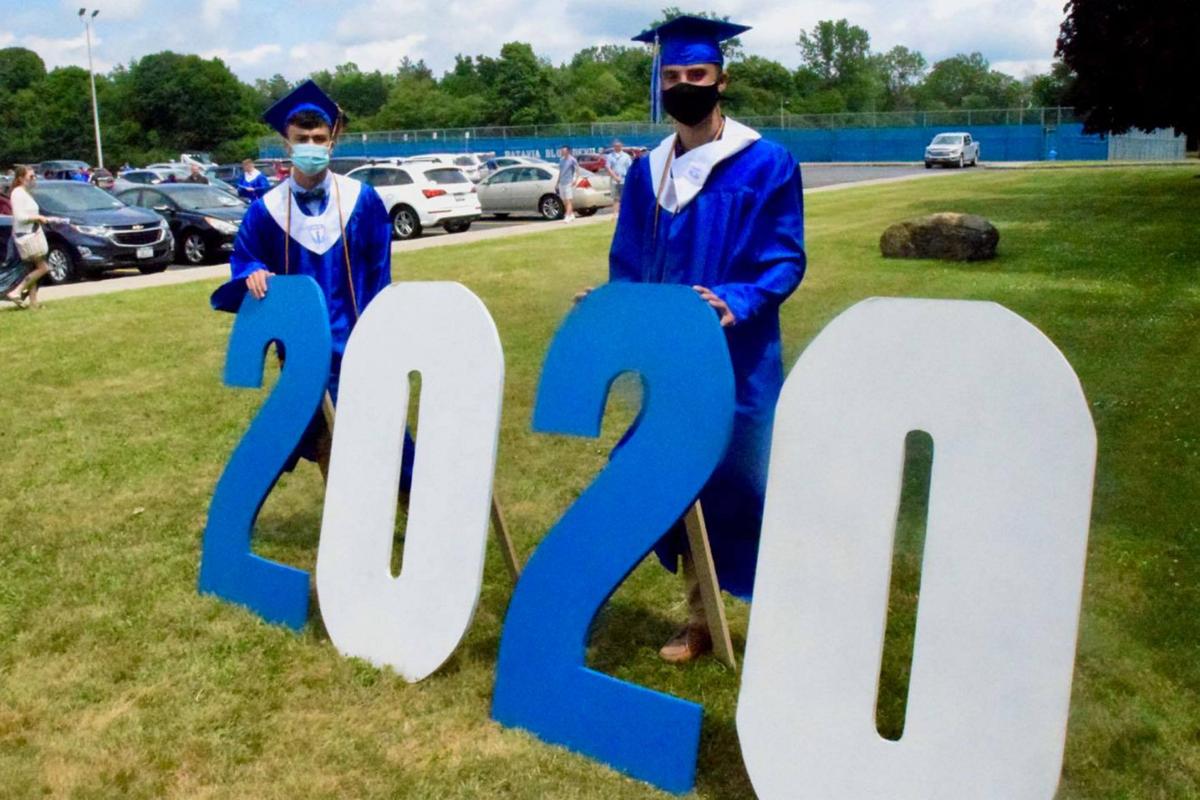 ALEX BRASKY/DAILY NEWSA couple of seniors stand by the Class of 2020 sign after their graduation ceremony ended Saturday. 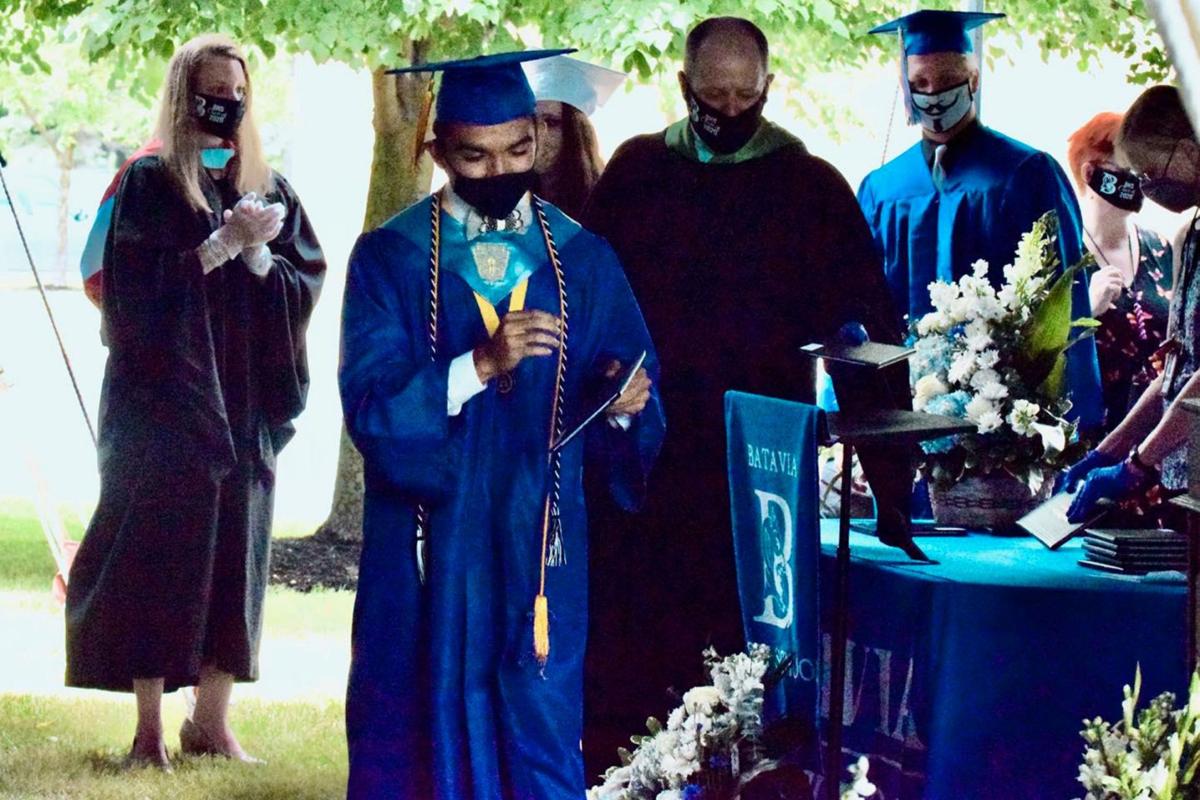 ALEX BRASKY/DAILY NEWS The class was divided into groups of about 30 each for the ceremonies. 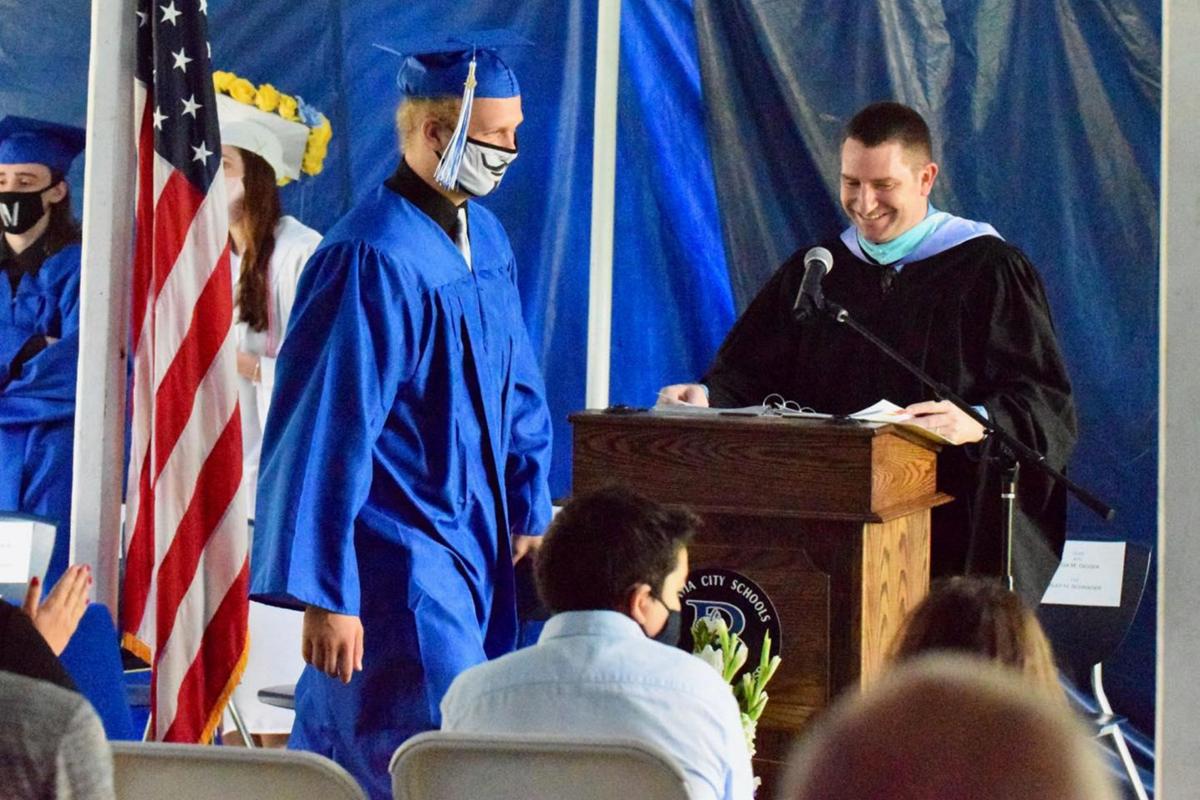 ALEX BRASKY/DAILY NEWS A graduate walks over to get his photo taken during a ceremony Saturday. 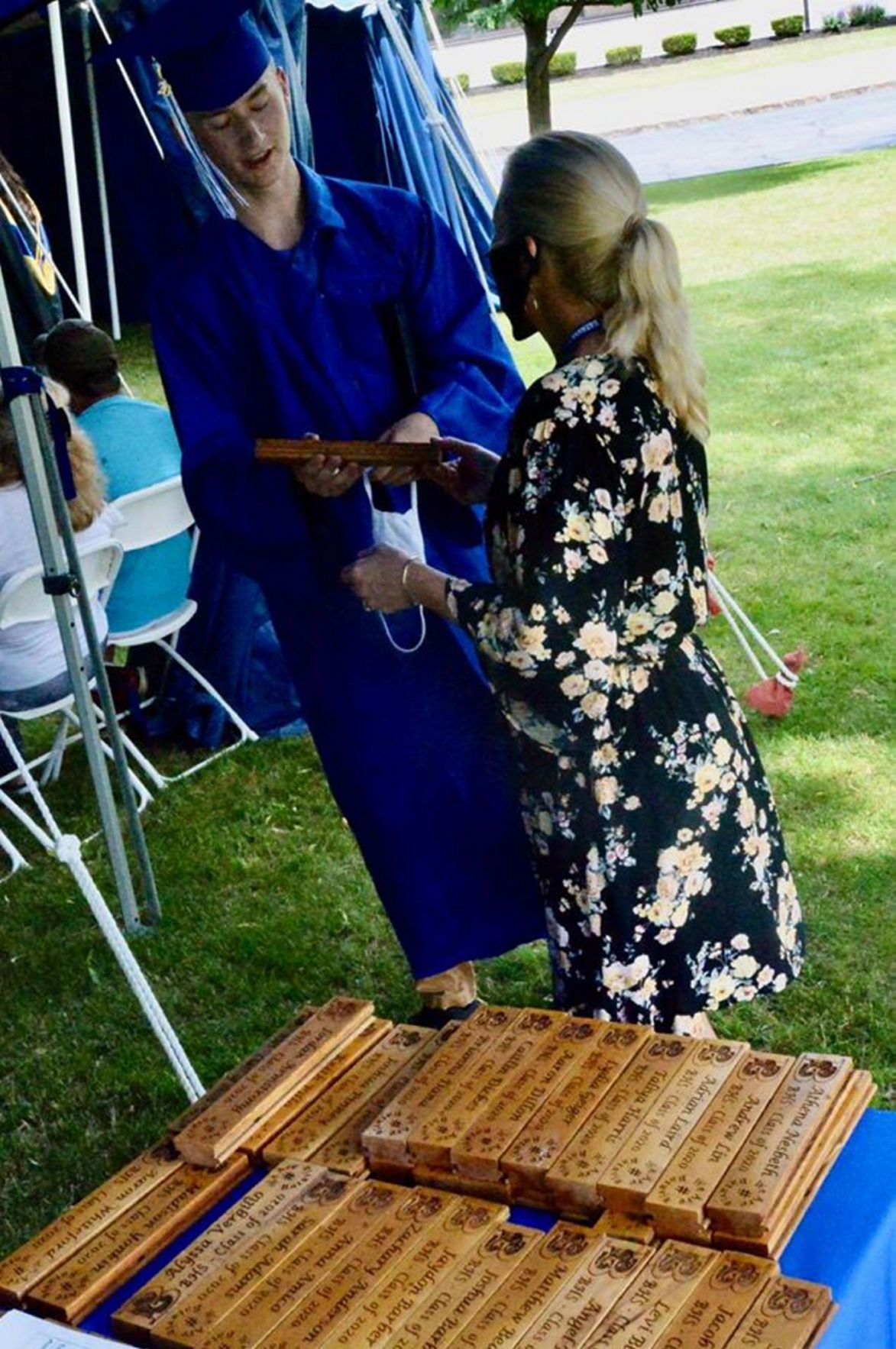 ALEX BRASKY/DAILY NEWS A graduate receives a piece of the floor that was replaced at Batavia High School. 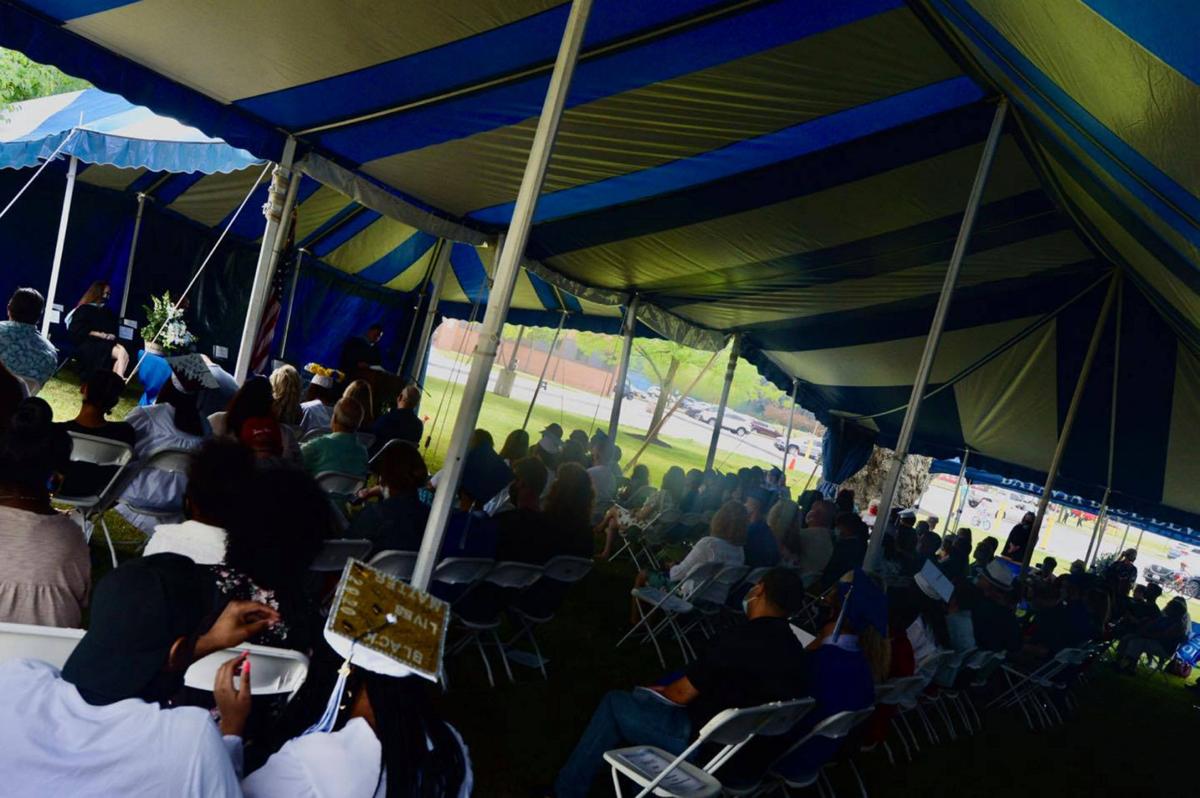 ALEX BRASKY/DAILY NEWS Family members and friends wait for one of the ceremonies to begin. 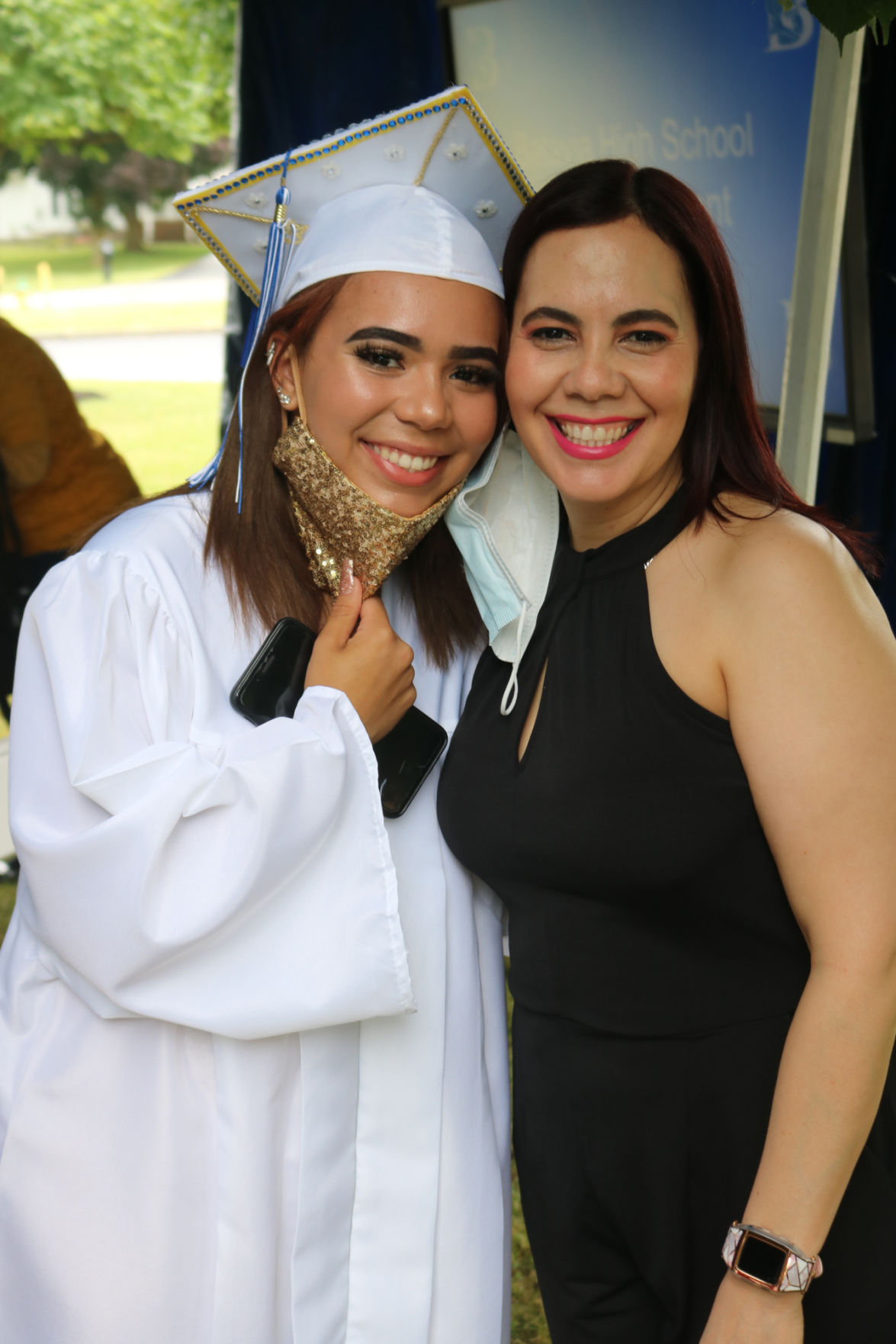 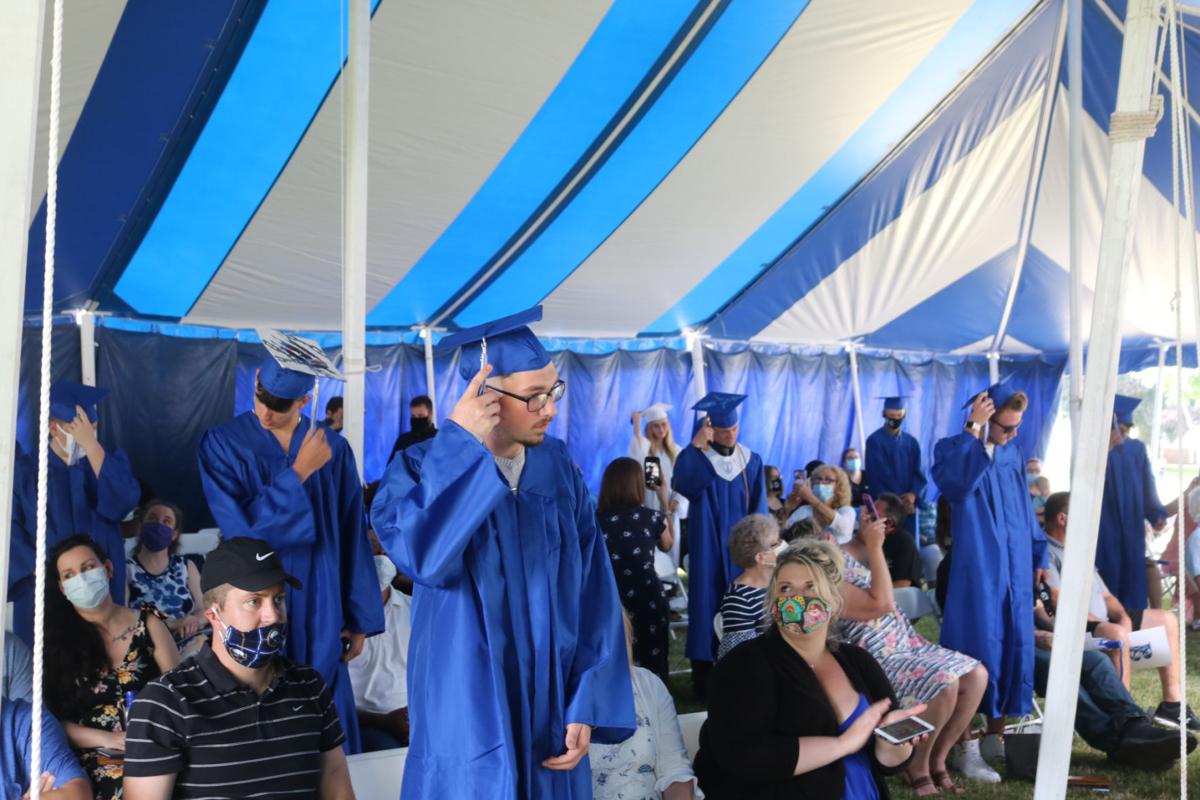 BRIAN QUINN/DAILY NEWS Graduates move the tassels on their caps from the right to the left toward the end of a ceremony. 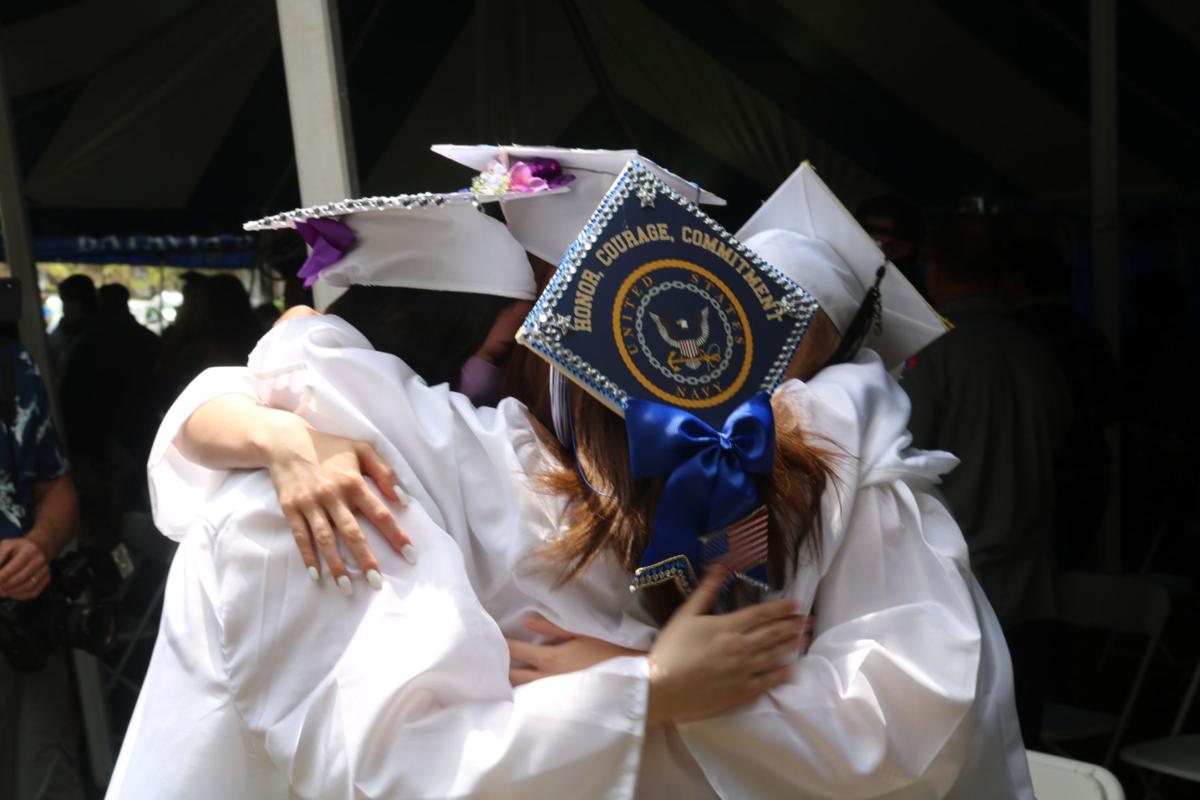 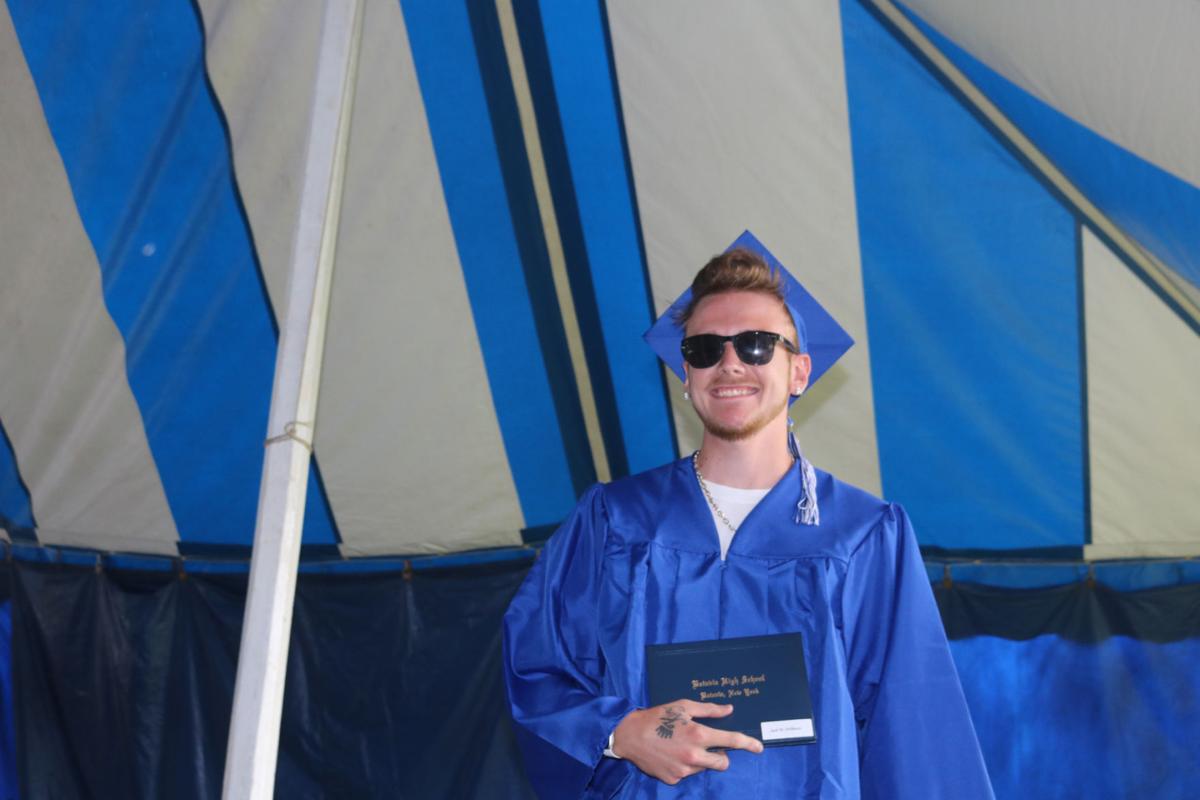 BRIAN QUINN/DAILY NEWS Jack DeMarzo is all smiles after receiving his diploma. 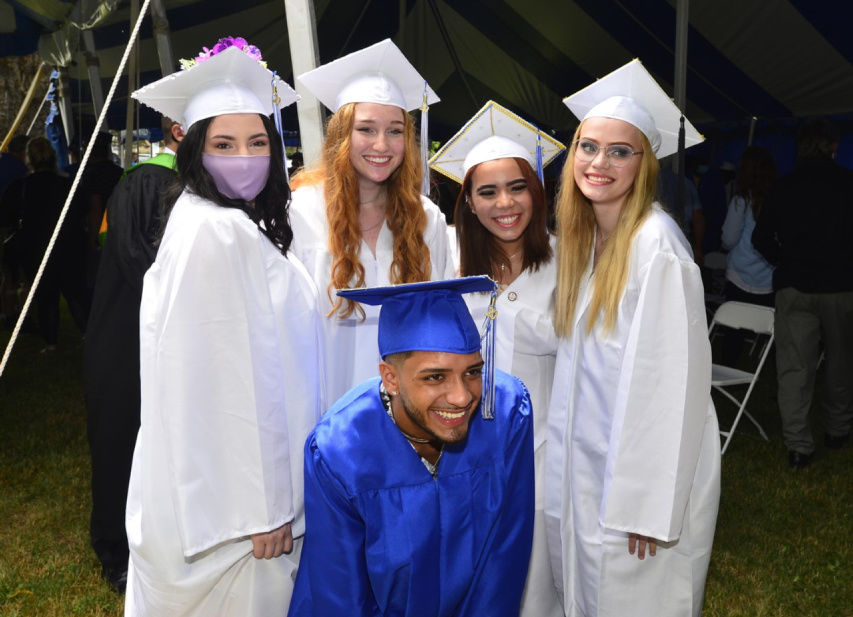 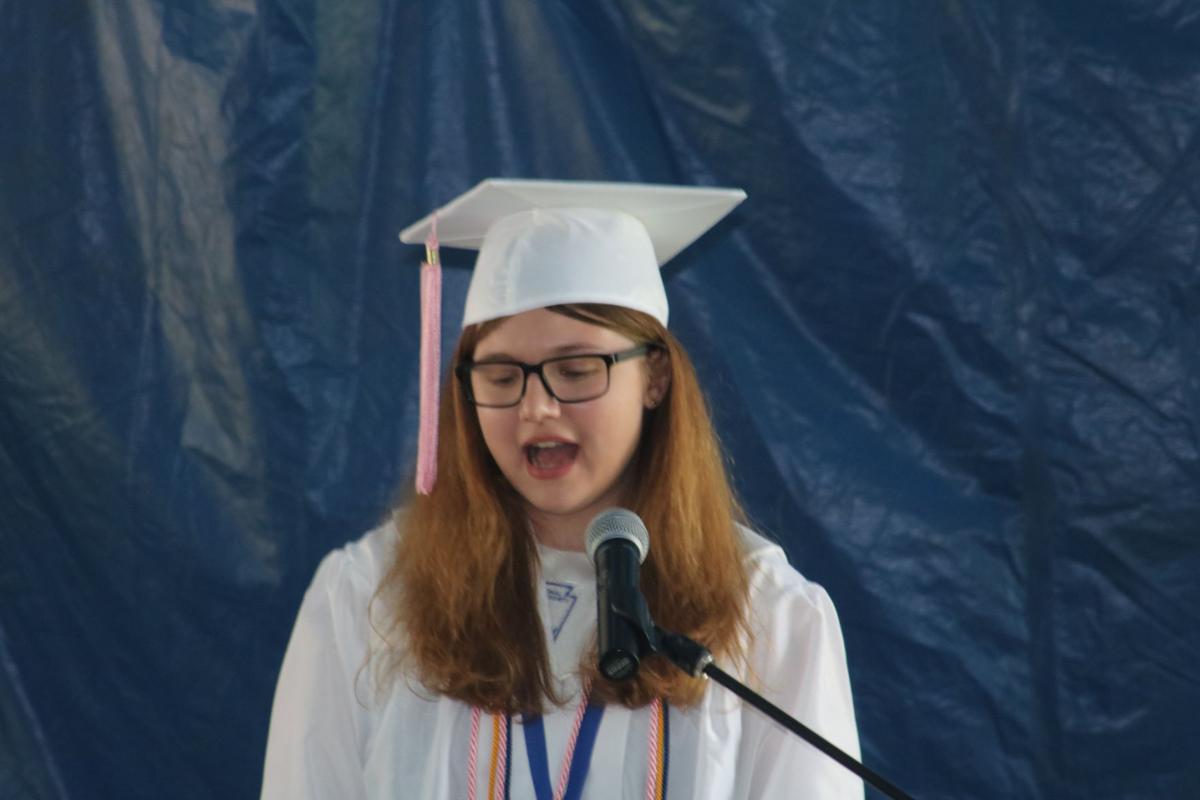 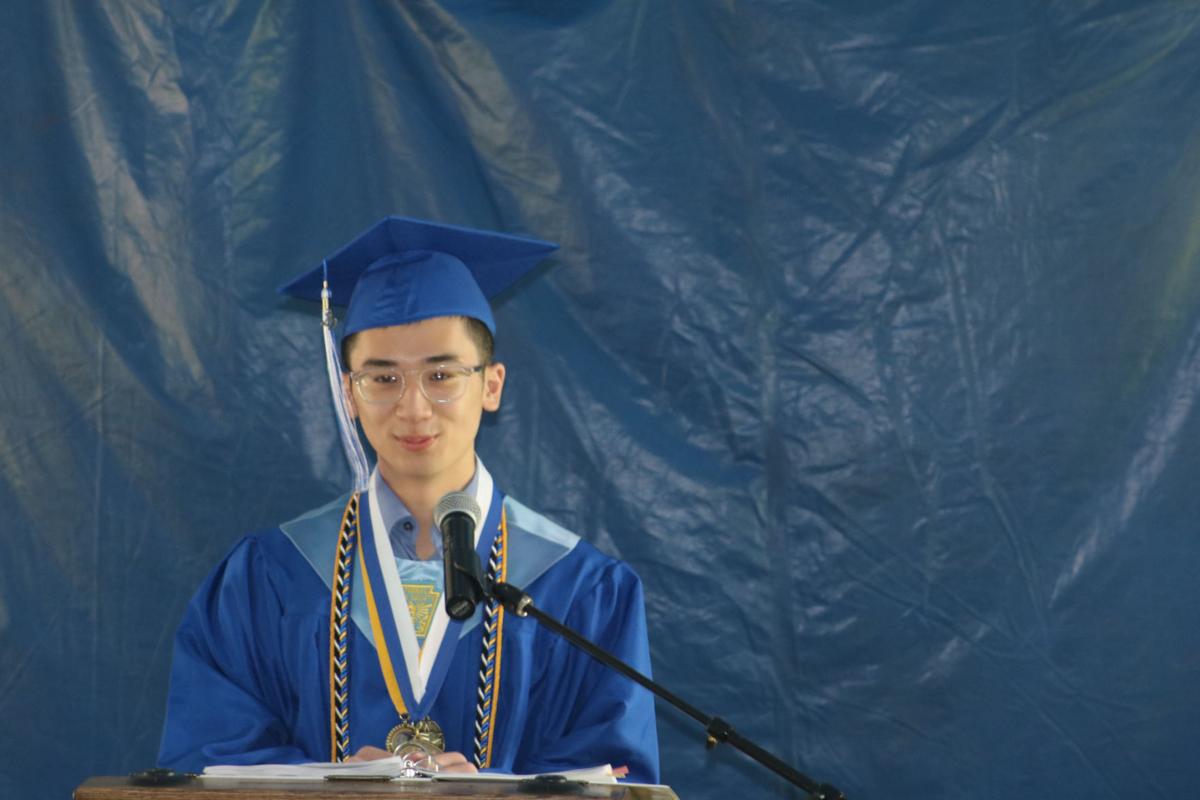 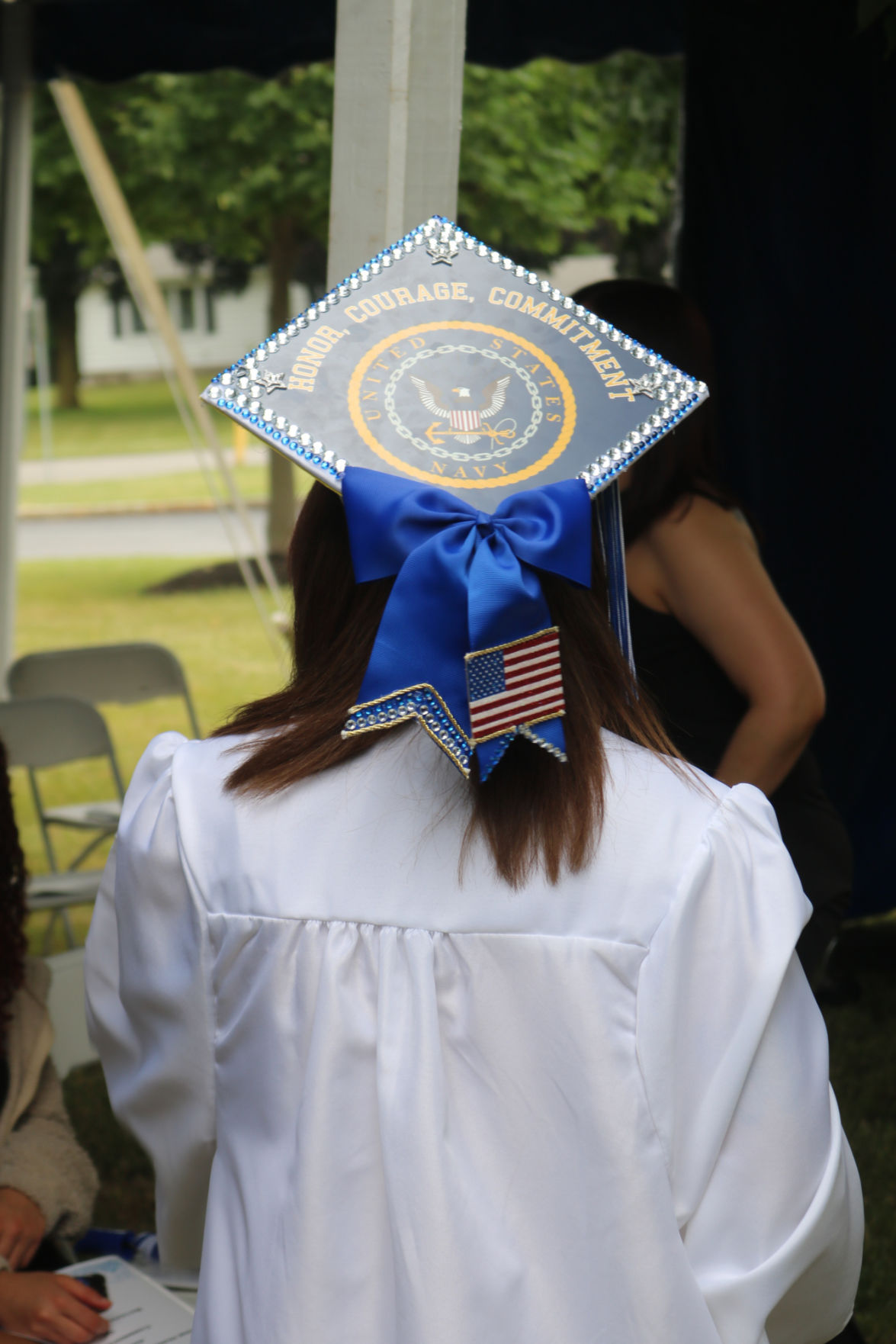 ALEX BRASKY/DAILY NEWSA couple of seniors stand by the Class of 2020 sign after their graduation ceremony ended Saturday.

ALEX BRASKY/DAILY NEWS The class was divided into groups of about 30 each for the ceremonies.

ALEX BRASKY/DAILY NEWS A graduate walks over to get his photo taken during a ceremony Saturday.

ALEX BRASKY/DAILY NEWS A graduate receives a piece of the floor that was replaced at Batavia High School.

ALEX BRASKY/DAILY NEWS Family members and friends wait for one of the ceremonies to begin.

BRIAN QUINN/DAILY NEWS Graduates move the tassels on their caps from the right to the left toward the end of a ceremony.

BRIAN QUINN/DAILY NEWS Jack DeMarzo is all smiles after receiving his diploma.

BATAVIA — Until COVID-19 struck, the Class of 2020 was leaving an unforgettable legacy at Batavia High School, Andrew Lin told his classmates when he stepped up to the podium Saturday afternoon.

Even though the circumstances of the coronavirus led to a “coronacation,” as the valedictorian called the time from mid-March through the end of the year, the Class of 2020 proved its resiliency, he said during the graduation ceremonies.

“All of us learned to fight adversity and continued our education remotely. Spring athletes continued to train. Many still took the tumultuous AP exams,” Lin said. “We made the best of the circumstances dealt to us. The Class of 2020 will be remembered as the best and most resilient ever in the history of Batavia High School.

“I can say without a doubt that without high school, we would not be the same people we are today. We have grown throughout high school, and we can find it everywhere, from the homecoming murals to the art we made to the skills we show on the field,” Lin told his audience. “Even though every day in this building felt like an eternity, right now it just feels like a fleeting dream. Now 1,390 days later, we are all here today taking the leap into the unknown future together.”

The last four years have been the greatest the class has had, but they won’t be the greatest it will ever have, he said.

“In just a few months we will be spread out all over the country, blazing our own futures. Continue to change and grow, just like you did throughout high school. Make new friends, take up new interests, tackle new challenges. Become new people,” Lin said. “And so, I leave you with this quote: “Don’t forget where you came from, but always remember where you’re going.” Batavia High School is our home, and we are all behind you, supporting you in whatever future awaits you.”

There were 166 graduates listed in the graduation program, almost half of whom were recognized in the program with at least one award or accomplishment. Among them was salutatorian Lydia Geiger, who also addressed classmates.

“With every passing moment, we are putting together the puzzle pieces in this journey we call life. And as more of the picture becomes evident, we will realize that there was a greater purpose. And in the end, we might realize that even the initial imperfections had only yet to be made perfect in their own time,” she said. “I would like to thank the Batavia High School faculty and staff as well as friends and family for their continuous support and encouragement throughout the past four years and for making our senior year one to remember, even when presented with unforeseen challenges.”

As Andrew Lin had done, Geiger described the class as “resilient.”

“We were born in the wake of 9/11 and we are now graduating in the midst of a pandemic. We have grown stronger together and we have grown up with the opportunity to see the views of so many perspectives,” she said.

“Most people prefer to live with the knowledge of what comes next. Too often, people rely on their past to predict their future. Our experiences have the potential to aid our wisdom, but they can also hinder and place limitations on the extent of our faith,” she said. “The human mind is powerful enough to discern and the heart is vulnerable, leading every individual to make the choice between having the expectation of faith or to live in a prison of their expectations. When we choose the expectation of faith, it opens our eyes to a greater understanding that negative circumstances often hold the greatest potential to have great purpose. It is in our imperfect moments that we have the most room for growth.”

For the graduation, held outside under a tent at Batavia High School, the class was broken up into groups, each with its own ceremony. Before or after their groups’s ceremony, some of the graduates shared their thoughts on the spring of their senior year and on today’s graduation.

“It felt surreal, crazy,” graduate Madison Yonkin said when asked about the past few months with schools closed, sports canceled and none of the traditional spring events. “It felt like I was in a really weird, bad dream for most of the time — just not being there, being able to finish my senior year —— the trips, Mr. Batavia, the prom.

“I’m glad we’re doing something for graduation, even if it is just a little crazy,” she said. Yonkin said she was hoping graduation could have been held at VanDetta Stadium.

“It would have been nice to graduate with all my classmates, but this is still nice,” she said.

Yonkin said she will go to Genesee Community College and then to the University at Buffalo to study psychology.

Gabrielle Lawrence, who was in the earliest group of seniors to graduate, said she will attend Niagara County Community College as a art major. Would she have rather had a traditional graduation with the entire class or the format the school followed today?

“Personally, I would have preferred it this way, mainly for everyone’s safety from the virus,” she said.

Graduates Erick Chugg and Ryan Klippel were waiting for the first ceremony to get underway Saturday. Chugg said in planning this year’s graduation, the school did the best it could considering the situation.

Klippel said having one ceremony with the entire class would have been nice, but under the circumstances, the setup used was fine.