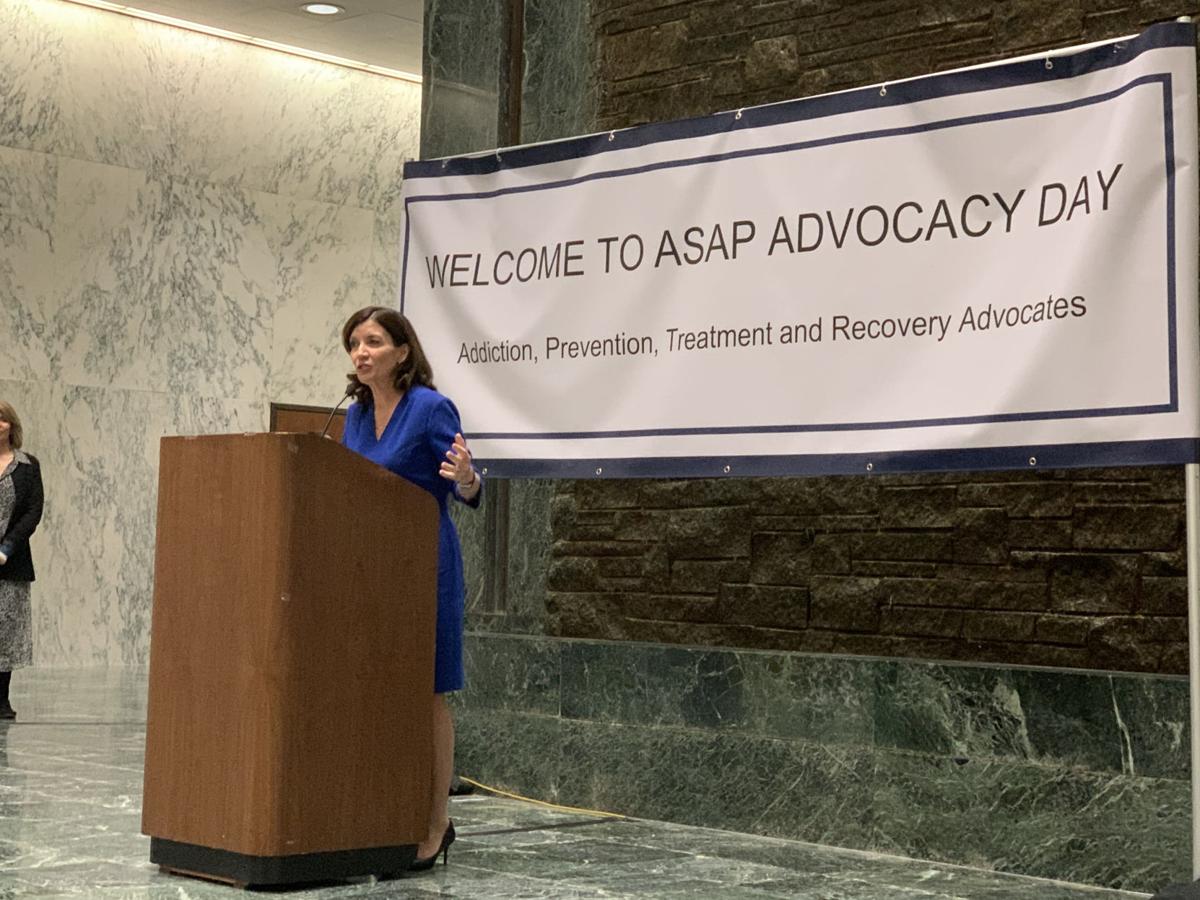 Lt. Gov. Kathy Hochul speaks to a crowd Tuesday afternoon about the need for the state to invest in opioid and substance abuse recovery and education programs at a rally at The Well in Albany’s Legislative Office Building. 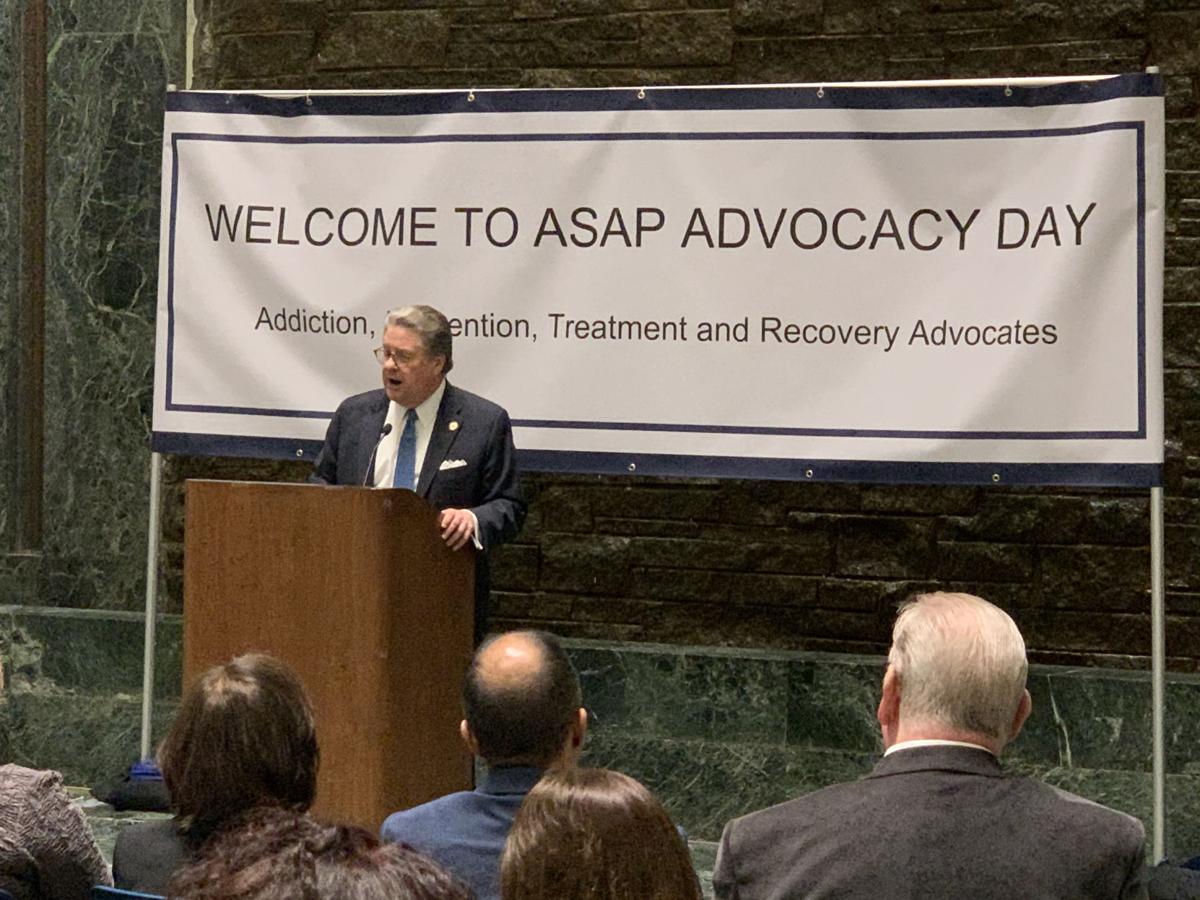 Sen. Pete Harckham, D-40, speaks to a crowd Tuesday afternoon about the need for the state to invest in opioid and substance abuse recovery and education programs at a rally at The Well in Albany’s Legislative Office Building.

Lt. Gov. Kathy Hochul speaks to a crowd Tuesday afternoon about the need for the state to invest in opioid and substance abuse recovery and education programs at a rally at The Well in Albany’s Legislative Office Building.

Sen. Pete Harckham, D-40, speaks to a crowd Tuesday afternoon about the need for the state to invest in opioid and substance abuse recovery and education programs at a rally at The Well in Albany’s Legislative Office Building.

ALBANY — If he were alive today, Linda Ventura’s son, Thomas, would be 29 years old.

In eight years, the Long Island native has missed a lot: The birth of his niece and nephew, dozens of photographs with family and friends and countless smiles in between.

Thomas Ventura died March 14, 2012, from an overdose one day after returning home from a 21-day rehabilitation center. He was 21.

“He had failed at outpatient,” his mother, Linda Ventura said from The Well of the Legislative Office Building in Albany on Tuesday. “He failed, but rock bottom is not rock bottom. Rock bottom is death. There’s no coming back from death.”

Coppola introduced each of the speakers from a podium at the front of The Well, which was filled with people listening from chairs on the floor to the large staircase at the back of the room. About a dozen tables with representatives from various recovery, rehabilitation and substance abuse organizations surrounded the crowd.

“We are here to advocate for resources, prevention, treatment — any kind of support to help people find recovery in their lives,” Coppola said. “What do you think kind of work could be done with additional resources?”

Representatives called on state officials to increase the amount of money in the 2020-21 proposed executive budget to address the state and nation’s opioid epidemic by investing in community-based programs.

Coppola outlined the group’s current mission: Fighting for 3% additional support for community-based drug and substance abuse organizations for the next five years.

The epidemic has swept the state and nation with increasing numbers over the last decade. The greatest rise occurred among synthetic opioid-involved deaths, predominantly fentanyl, with 2,238 deaths reported in 2017, up from 210 fatalities in 2013.

More funds are necessary across the board for outreach, recovery, education and prevention programs, Coppola said.

The lieutenant governor shared her personal experience with addiction, saying many addicts are born outside of stereotypical circumstances. In high school, Hochul’s nephew sustained a hand injury and became addicted to opioids after his doctor prescribed them for the pain.

“My nephew struggled with addiction because he listened to his doctor... he just followed his doctor’s orders,” Hochul said. “He struggled for years to fight back and he hit rock bottom.”

When Hochul’s nephew went to get support, he was met with roadblocks to get the treatment he needed because of Medicaid paperwork and financial hardship, she said, adding that’s what has to change.

“He went back to the streets, and it wasn’t long before they found a needle in his arm,” Hochul recalled. “It has to end now. We’ve lost too many lives — precious lives.

“It doesn’t come from that we didn’t have enough capacity to take care of you. Never again in the state of New York.”

The stigma surrounding drug use and addiction is the No. 1 barrier holding back officials and organizations working to combat the opioid crisis, Harckham said.

“The stigma of people to seek help — the stigma for families to come forward... to adequately fund the services you provide,” he said. “Stigma is a big part of that, and if we’re trying to fight that stigma, we cannot stay anonymous anymore.”

Ventura agreed: The path to recovery includes ending stigma, and doing that requires survivors and families to share their stories.

“We need to stand united,” said Ventura, who is the founder of Thomas’ Hope Foundation, which raises awareness and prevention to combat drug addiction. “We’re in the trenches every single day. When the door opens, we have to get that patient through to recovery. We will pick you up wherever you are and make things happen for you.”