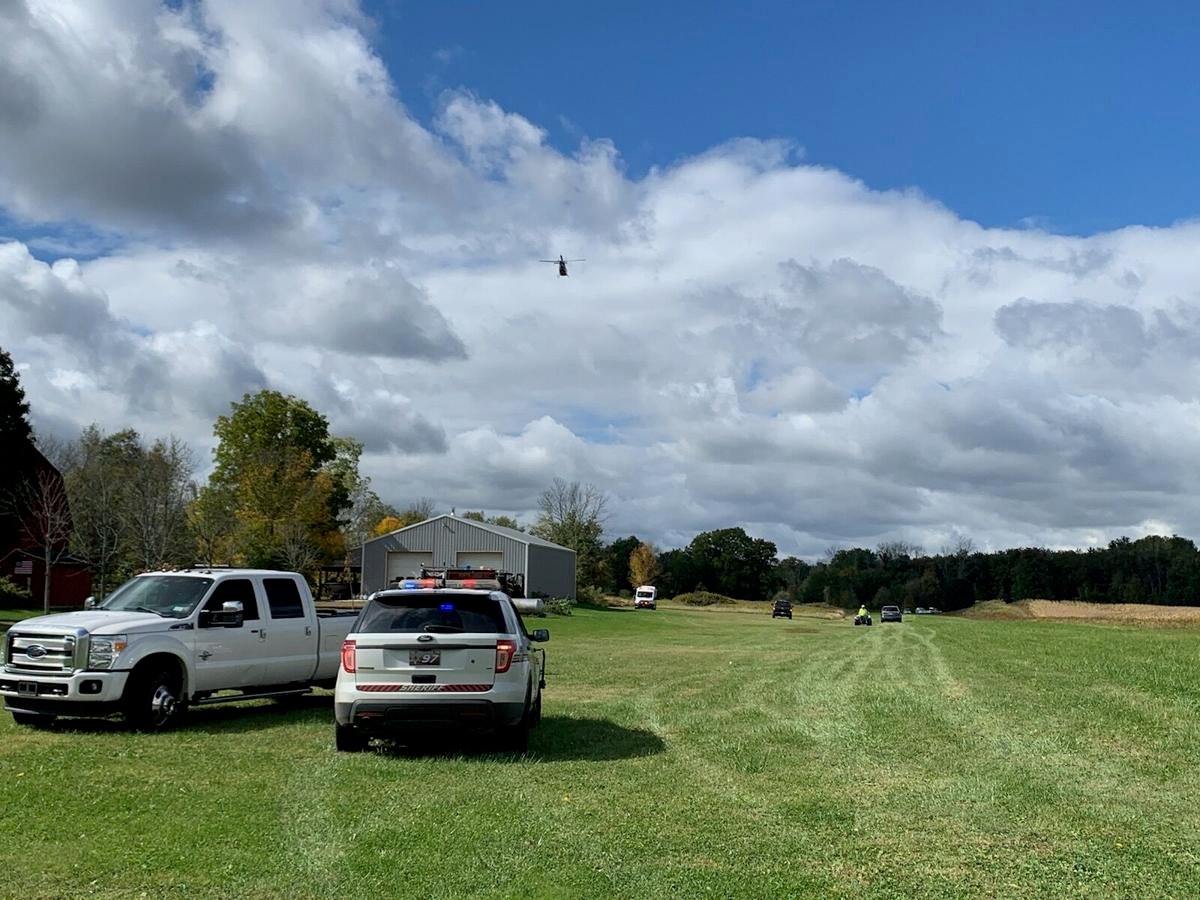 A Mercy Flight helicopter is seen arriving at the scene of an apparent plane crash off Boyce Road in Corfu. 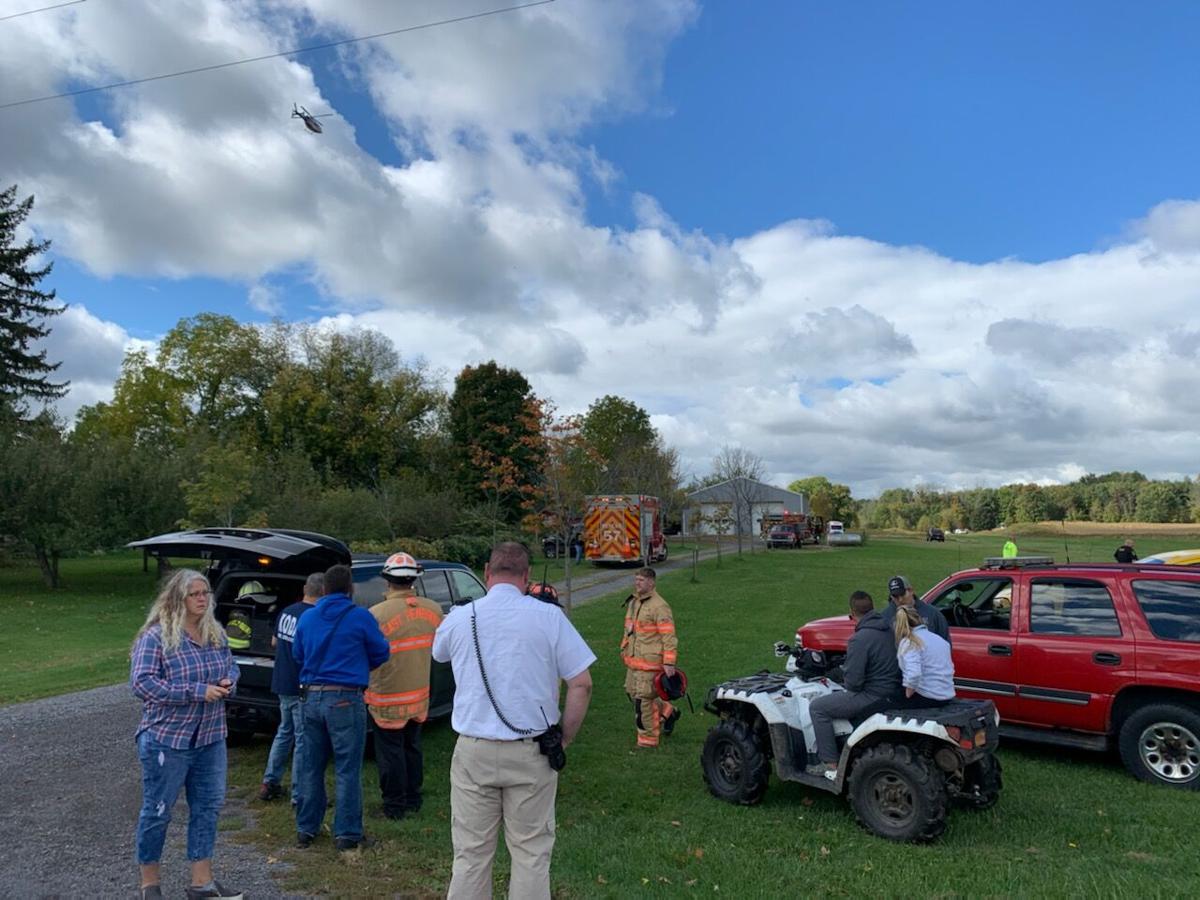 Corfu and East Pembroke Fire Department personnel are among those at the scene of the apparent plane crash off Boyce Road in Corfu. Genesee County Sheriff's personnel and State Police are also on scene.

A Mercy Flight helicopter is seen arriving at the scene of an apparent plane crash off Boyce Road in Corfu.

Corfu and East Pembroke Fire Department personnel are among those at the scene of the apparent plane crash off Boyce Road in Corfu. Genesee County Sheriff's personnel and State Police are also on scene.

CORFU - Two people are dead following a late-morning plane crash in a wooded area off Boyce Road in Corfu, according to the Genesee County Sheriff's Office.

The deceased is a male and a female, but the Sheriff's Office said it has not yet been able to make a possible ID about who was or wasn't aboard the plane.

All individuals on the plane are believed accounted for, the Sheriff's Office said.

The plane was registered to an address that matched to Buffalo address of the Cellino & Barnes law firm, according to a Federal Aviation Administration registry.

Buffalo-area media is reporting that Steve Barnes was killed in the incident along with a female relative.

The plane left Manchester, N.H., this morning and was en route to Buffalo when it crashed around 11:48 a.m.

Sheriff William Sheron said during an afternoon press conference that neighbors reported hearing a "winding sound" and then "the plane fell from the sky."

A neighbor later told The Daily News that he heard a "whining noise, like a sport motorcycle crotch rocket, and then a boom."

A debris field of hundreds of feet was described at this afternoon's press conference. The plane was described as "essentially disintegrated" with only "very small pieces.

The National Transportation Safety Board, in a tweet this afternoon, said it was investigating a crash involving a Socata TBM 700 aircraft.

NTSB Spokesman Terry Williams said he could not confirm who the pilot was at this time.

“We’re gathering facts and that’s going to go on for quite some time,” he told The Daily News this afternoon.“We’re going to be looking at the aircraft, the pilot and the environment. We’re in the very early stages of this investigation.”

Investigators from the NTSB are expected to arrive tomorrow. Police will remain overnight to secure the scene.

Emergency crews are at a location off Boyce Road in Corfu responding to a plane crash. The scene is off the road, reportedly about a mile into the woods. The crash site is not visible from the road.

It is unknown how many people were on board. Initial reports indicated it was a six-passenger plane with an unknown number of occupants.

Mercy Flight landed near the scene, then took off and was seen hovering over the woods. The helicopter later made a second landing at the scene.

A utility vehicle with a Stokes basket aboard was observed heading to the site. A second Stokes basket was also taken toward the woods.

A Stokes basket, also called a Stokes stretcher or Stokes litter, is a metal wire or plastic litter widely used in search and rescue.

Genesee County Sheriff's deputies are on scene along with members of Corfu and East Pembroke Fire Departments and State Police.

Extent of injuries and other details unknown at this time.

Genesee County Sheriff William A. Sheron Jr. has arrived at the scene.

A State Police helicopter has arrived at the scene and landed. The helicopter later took off and has continued to orbit the area.

The Mercy Flight helicopter has departed. It is not known if the helicopter was carrying patients.

Personnel from the New York State Division of Fire have arrived.

Representatives from the Federal Aviation Administration are on their way, according to Sheriff's deputies.

The Sheriff's Office indicated it would be a couple more hours before a formal press conference to release information.

A New York State Emergency Management vehicle is on scene.

Daily News staff is at the scene and will update as information is available.