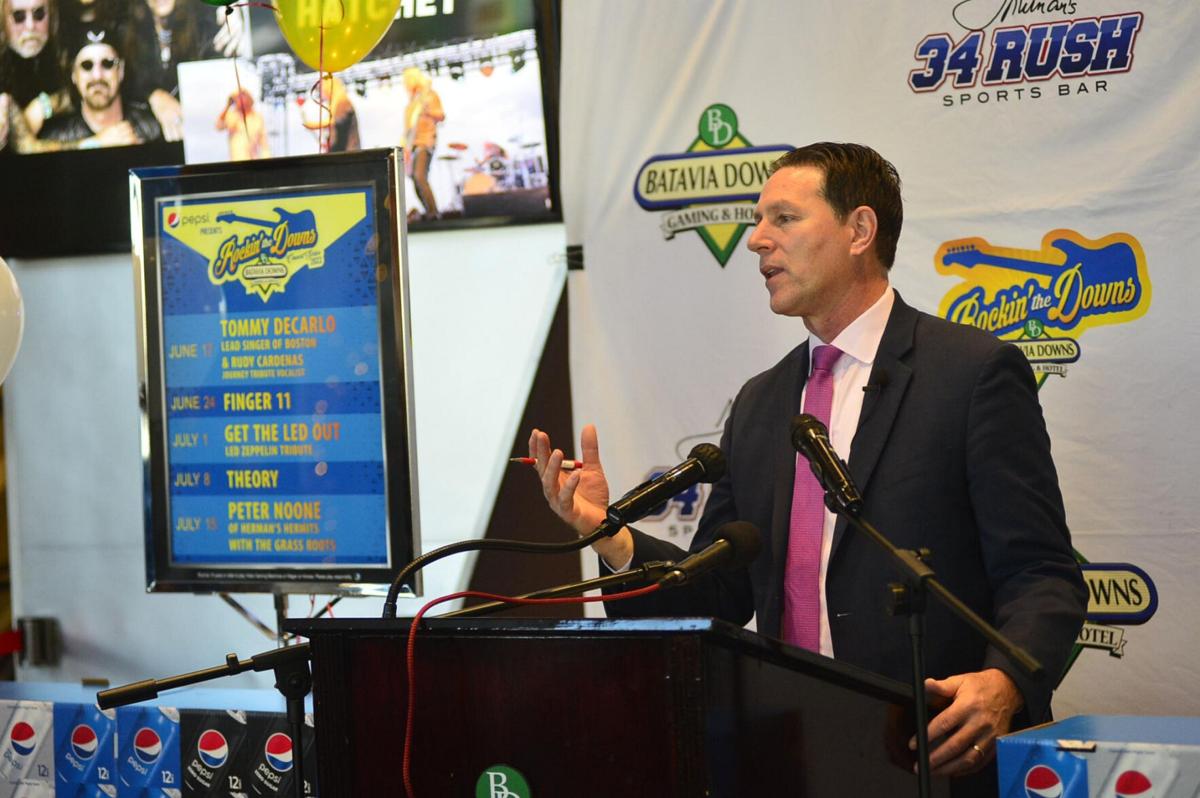 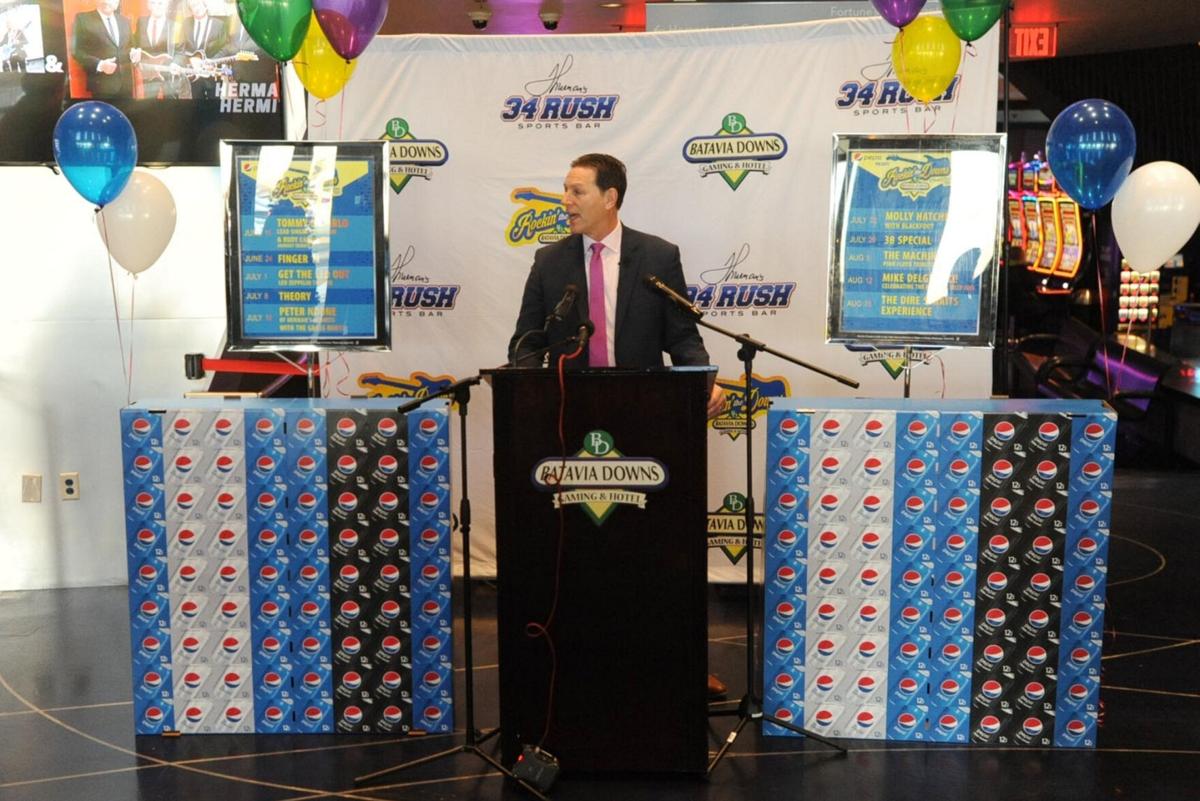 BATAVIA — Ten Friday concerts are set for the Pepsi Rockin’ the Downs Summer Concert Series in 2022, with tickets going on sale online today.

“As you look up to this year, we have scheduled 10 shows and I think you’re going to agree with me, it’s, by far, the best show lineup that we’ve had,” Henry Wojtaszek, president and CEO of Batavia Downs Gaming & Hotel, told those gathered for Wednesday’s announcement at Batavia Downs.

The series will start in mid-June and take place outside at Batavia Downs on the racetrack. Doors would open around 4 p.m. and the headlining act would take the stage at about 8:30 p.m.

Tickets for all concerts will be available at www.BataviaConcerts.com only beginning at 10 a.m. today. Tickets will be $15 for General Admission, $30 for VIP, $50 for Premium and debuting this year, limited tickets for $75 will guarantee a front-row spot. All tickets can be redeemed at Player’s Club at any time in the three days following the concert for $15 Free Play to be used on one of Batavia Downs Gaming’s gaming machines.

Tickets will be available in the store at Batavia Downs next week.

“With Christmas coming up, people complaining about supply chains, etc., there’s not going to be any problem getting these tickets, either here locally or online,” Wojtaszek said. “Debuting this year, we’ll have a limited amount of tickets available at $75, which will guarantee you a front-row spot.”

Until Christmas, tickets purchased online for the General Admission section will be only $10. Concert-goers will still receive $15 in Free Play on show day with this ticket.

n Kicking off the series on June 17 will be a double bill of rock with Tommy DeCarlo and Rudy Cardenas. DeCarlo has been the lead singer of Boston since 2007 and performs all of Boston’s hits from the ‘70s and ‘80s, including “More Than a Feeling,” “Peace of Mind” and “Hitch A Ride,” and more! Cardenas, a season 6 “American Idol” finalist, will open the show, performing a full set of Journey’s classic hits.

n On June 24, Canadian Rock Band Finger 11 will perform. Originating in Burlington, Ontario in 1990, the band has released seven studio albums. The Juno Award winning rockers will be performing hits such as “One Thing,” “Paralyzer” and others.

n Get the Led Out performs at Batavia Downs July 1. This group will perform the songs of Led Zeppelin. Get the Led Out tours all across the US and Canada, playing Zeppelin hits like “Black Dog,” “Immigrant Song,” “Stairway to Heaven.”

n Theory returns to Batavia Downs July 8. Hailing from Delta, British Columbia, the band, also known as Theory of a Deadman, has nine top 10 hits on the US Billboard Hot Mainstream Rock Tracks, including four No. 1 tracks in “Bad Girlfriend,” “Lowlife,” “Rx (Medicate)” and “History of Violence.”

n July 15 is another double bill, this time with Herman’s Hermits starring Peter Noone. Noone achieved international fame as Herman, lead singer of the ‘60s pop band Herman’s Hermits. His classic hits include “I’m Into Something Good,” “Mrs. Brown, you’ve Got A Lovely Daughter” and “I’m Henry VIII, I Am.” Earlier that evening The Grass Roots will take the stage having originated in the mid-’60s and charted with such hits as “Midnight Confessions,” “Let’s Live for Today,” “Sooner or Later” and “Temptation Eyes.” The current lineup of Mark Dawson, Dusty Hanvey, Larry Nelson and Joe Dougherty played Batavia Downs last summer.

n On July 22, southern rock legends Molly Hatchet will return to Batavia Downs. Starting in Jacksonville in 1978, the band has released 14 studio albums. Molly Hatchet will perform hits such as “Flirtin’ with Disaster,” “Dreams I’ll Never See and Whiskey Man.” Opening for them will be American southern rock band Blackfoot, which will be playing such hits as “Train, Train” and “Highway Song.”

n On July 29, another legendary southern rock band, 38 Special will perform. After forming in Jacksonville in 1974, 38 Special has had $20 million in sales. It performs arena-rock pop smashes such as “Hold On Loosely,” “Rockin’ Into the Night” and “Caught Up in You.”

n America’s top Pink Floyd show, The Machine, returns to the Batavia Downs stage Aug. 5. Last year’s performance at Batavia Downs was well received by one of the largest crowds of the summer.

n Making his Batavia Downs debut on Aug. 12 is Mike DelGuidice, recording artist/singer/songwriter who is currently on tour with Billy Joel. In October 2013, Billy Joel personally hired DelGuidice to join his band. DelGuidice and his band play all of Joel’s big hits. They will also perform renditions of other classic rock hits, plus some of DelGuidice’s original work.

n Closing out the series on Aug. 19 is the Dire Straits Experience. With former Dire Straits member Chris White, this collection of professional musicians will be playing all of Dire Straits’ major hits.

“They were really popular. We were able to do them the first three seasons,” Wojtaszek said. “We weren’t able to do it last year because of some issues as we all know about. Season tickets are an excellent value, because you’re going to get to receive a large amount of Free Play, depending on what you buy.”

Concerts are held rain or shine. Additional information may be found at www.BataviaDownsGaming.com.

“This concert series has really grown into something over the years,” Wojtaszek said. “We’re very proud of what we’ll be able to put on the stage. We’re looking forward to the best lineup that we’ve ever had.”