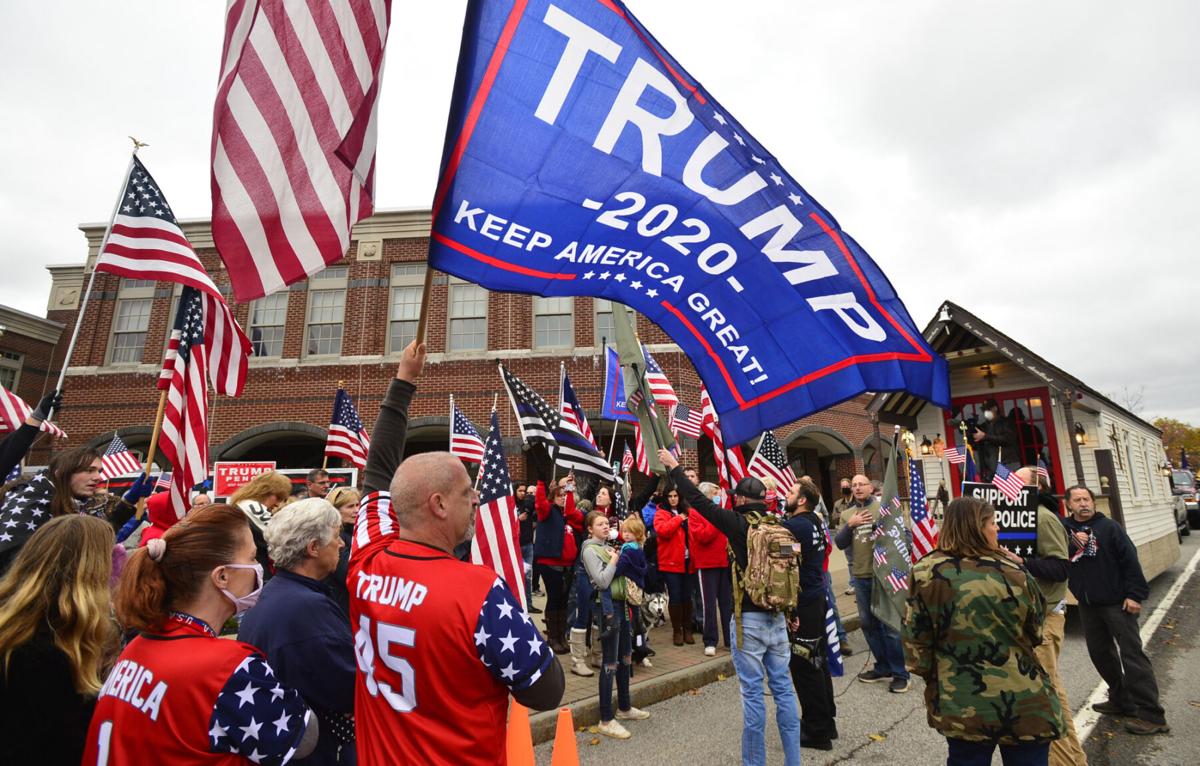 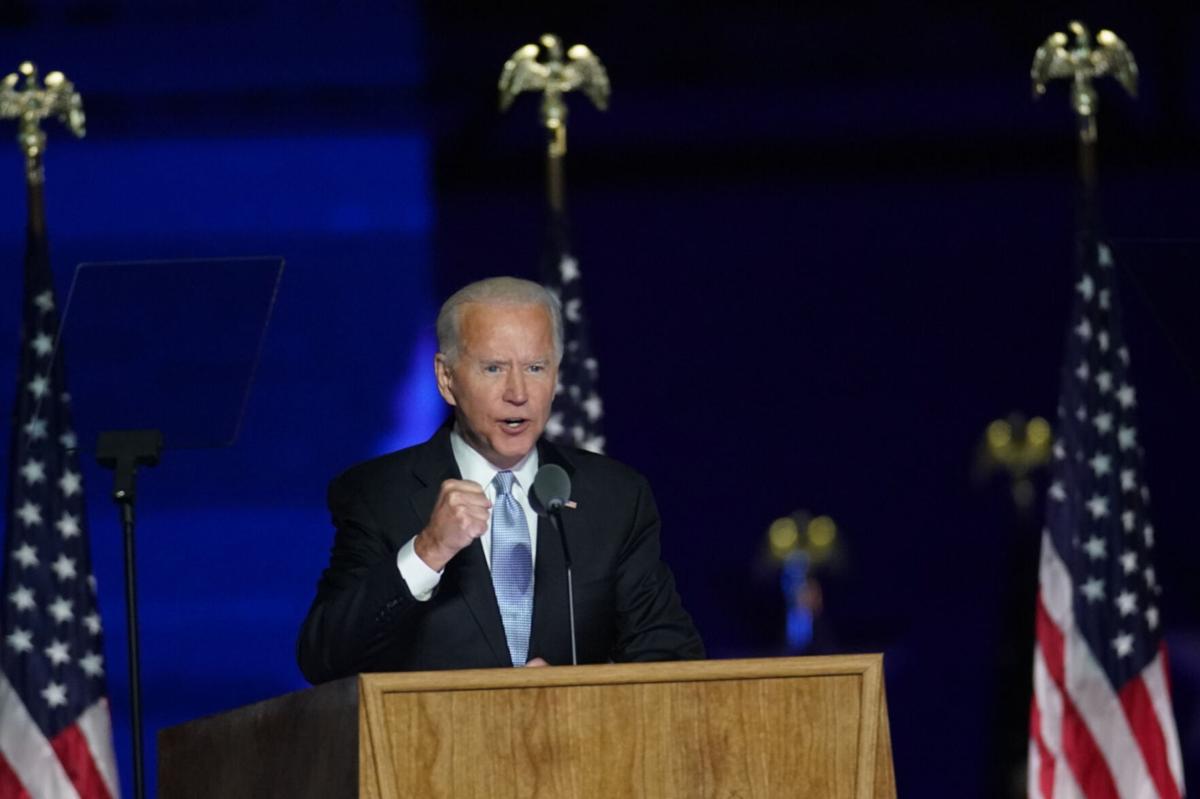 Bloomberg photo by Sarah Silbiger Joe Biden delivers an address during an election event in Wilmington, Del., on Nov. 7, 2020.

Bloomberg photo by Sarah Silbiger Joe Biden delivers an address during an election event in Wilmington, Del., on Nov. 7, 2020.

MINNEOLA, Fla. — President Donald Trump lost the election, but his bombastic brand of conservative populism lives on, leaving President-elect Joe Biden the momentous task of unifying a land divided over race, immigration, the COVID-19 pandemic and how we see ourselves.

Trump has long been a cartoon-like villain for moderates and progressives. But he resonated with another part of the nation — one that gave him 70 million votes and for years felt voiceless and disillusioned.

He personified the split in the national spirit, and his presidency revealed how far apart we had grown after decades of a Washington increasingly detached from the lives of those it represented.

Although Biden clinched victory Saturday, the election was at once an underwhelming repudiation of Trump and an endorsement of his overhaul of the Republican Party.

There was no blue wave. Trump has exceeded his total from the last presidential election by more than 7 million votes. Republicans gained seats in the House, held on to state legislatures and could retain the Senate.

In case the 2016 election left any doubt, the 2020 election confirmed that Americans live in parallel universes, each foreign to the other.

On one side are voters like David Merin, who lives in Newport Beach, Calif.

His early hopes that Trump would grow into the job quickly faded as the president fanned the flames of extremism, disparaged immigrants and fueled conspiracy theories.

“Almost every week, there was some sort of statement out of his mouth that, under any other presidency, would have been the scandal of the year,” said Merin, 50. “But they were usurped by the next day, or at most, the next week.”

At the top of his list is the president’s handling of the pandemic.

“What more would it take for people to see how dangerous this man’s lack of leadership is?” said Merin, whose job as an emergency room doctor has given him a front-row seat to the suffering wrought by the coronavirus.

As the votes started coming this week, Merin, who voted for Biden, was shocked that a more resounding majority did not do the same.

“It’s hard to even understand how anyone paying attention could act differently,” he said.

But that view is equally incomprehensible to people on the other side of the American divide.

Doug Blair, a 63-year-old sales representative from suburban Detroit, said it is ridiculous to blame Trump for the pandemic — despite the president’s disparagement of masks and public health experts.

Blair said the president deserved a second term, because the economy was booming before the coronavirus and unemployment was at a historic low.

“These are facts that matter,” he said. “The other side never wants to talk about this.”

A banner strung across the side of his brick home showed a photograph of Trump and a slogan: “Promises Made, Promises Kept.”

As for a Biden presidency, he said: “I shake my head thinking about why any American would support him.”

Indeed, when it came to the main issues that motivated voters, exit polls found little common ground between Trump supporters — the economy — and Biden supporters — racial inequality and the pandemic.

To explain how Biden has received more than 74 million votes and inched ahead in several swing states, many Trump supporters have embraced the president’s claim that the election was being stolen from him.

“It’s a fraud,” said Tom Vail, a 60-year-old floral importer at a small “Stop the Steal” rally this week outside the Minneola City Hall in Lake County, Fla.

The rally took its name from a Facebook group that quickly grew to 350,000 members this week before the platform banned it because some members were promoting violence.

Trump has offered no evidence of wide-scale fraud, and even prominent Republicans have dismissed his allegations as meritless.

But that did not appear to matter to Vail, who echoed Trump’s assertion that he was on course to win the election until state elections officials squashed his chances by counting large numbers of fake and illegitimate votes.

Vail also said the media and tech companies were part of the conspiracy — for shooting down the president’s claims under the guise of fact-checking as they appended accuracy warnings to his posts and similar ones by supporters.

His wife, Vara Vail, who joined him in wearing a “Trump Victory” shirt, said the president had “already won.”

Pointing to her own history — she was raised in Thailand by a Chinese father who fled communism — she also said anybody who calls Trump racist or anti-immigrant has “no idea what they are talking about.”

The common claim on the left that racism primarily explains the president’s support took a hit in the 2020 election.

Trump’s strongest backers were white men, but exit polls suggest he made gains among groups outside his base.

Winning nearly a third of votes cast by Latinos, Trump made inroads along the Texas-Mexico border and grew his support among the Cuban American population in Florida — areas that had some of the sharpest swings from Democrats to Republicans this year. Among Black men, Trump took 18% of the vote.

Those increases made little sense to Lakayana Drury.

A 31-year-old community organizer in Portland, Ore., he spent much of the summer hosting discussions between police and young Black men as protests grew there and across much of the country following the death of George Floyd under the knee of a police officer in Minneapolis.

It seemed obvious to him — a Black man — that Trump disregarded lives like his and did not view racism as a major problem in America.

Drury wondered how others failed to see that — or were they simply willing to overlook it?

He voted for Biden, a man he thought would show “moral leadership” and be “diplomatic” compared with Trump, even though he was not “super crazy about him.”

And he held on to a thin hope that a future President Joe Biden could help heal the divisions he’s seen in his community and nation.

“I do think it starts with someone who can set a tone,” he said. “Now, individuals are very split. Trump has grown that wedge.”

For now, as the news of Biden’s victory begins to sink in, the divide appears to be growing.

“Democrats are scheming to disenfranchise and nullify Republican votes,” a website for the protests — StolenElection.Us — said without evidence. “It’s up to the American people to stop it.”

An opposing group, Protect the Results, has organized demonstrations across the country, joining spontaneous street gatherings celebrating the president-elect’s win.

“There is no line he won’t cross,” its website says of Trump, adding: “We must prevent Trump from using this moment to sow discord, confusion, and doubt on the November election results.”

A common refrain on the left over the last four years was “Not my president.”

Half the country may still believe that.