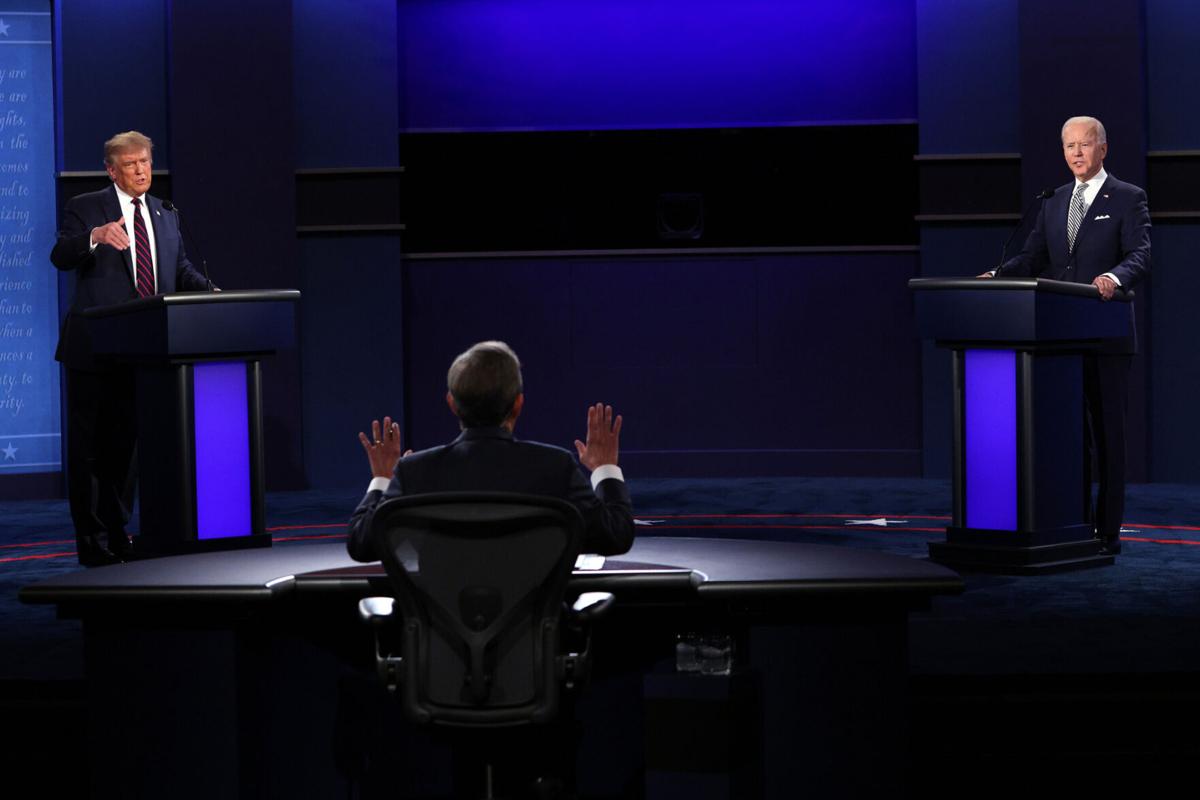 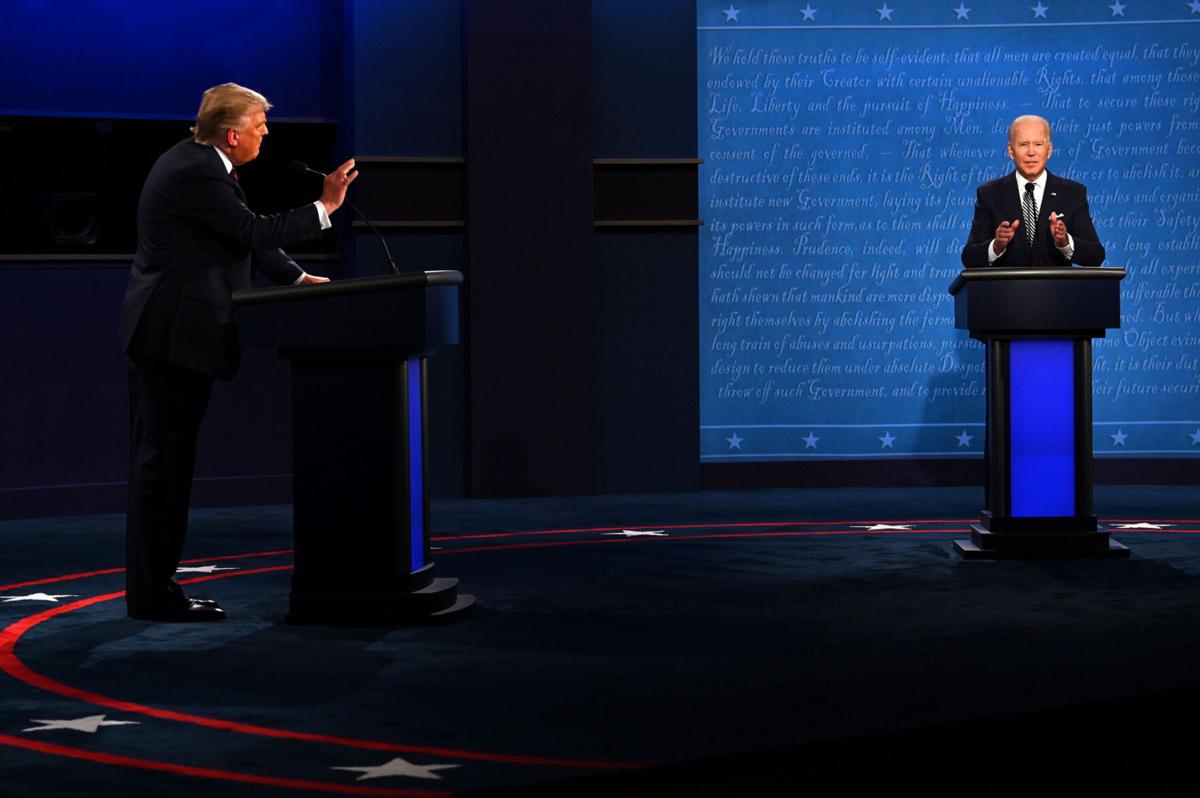 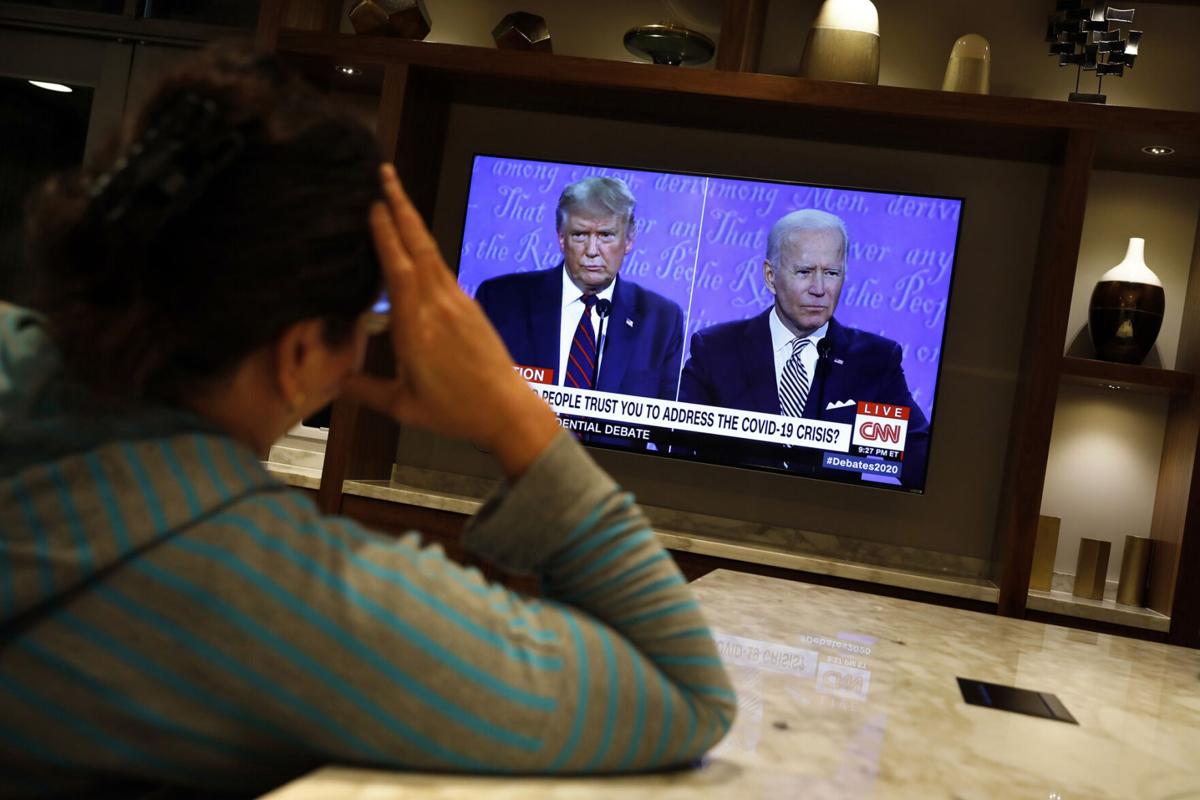 WASHINGTON — President Donald Trump decided Tuesday to bring his chaotic and confrontational style directly to the debate stage at his first face-off with Democrat Joe Biden, seemingly unconcerned that his approach has alienated many independent and moderate voters.

What resulted is likely to go down as one of the low points in U.S. presidential debate history.

Trump’s frequent interruptions and personal barbs during the roughly 90-minute showdown were the personification of his reelection strategy, which has focused largely on exciting a core group of die-hard supporters who revel in his willingness to insult and shock while giving no ground.

And he at times flustered Biden — who Trump has for months attempted to paint as senile — with unrelenting attacks on his family and policies. But Biden never looked out of touch, and he did match Trump attack for attack, calling the president a “clown,” a “racist” and “the worst president America’s ever had.”

Polls have shown that the president can’t win reelection with his base alone: He needs to reverse his fortunes at least around the margins with college-educated, suburban and female voters who are dismayed by the controversies of his first term.

There was little evidence his debate performance would accomplish any of that, particularly as he declined to explicitly disavow white supremacists and suggested he wouldn’t leave office if the election results were not to his liking. Biden is leading Trump by about 7 percentage points in national polls, a remarkably consistent lead over recent months.

Even some in the president’s camp thought Trump took it too far.

“It was too hot,” former New Jersey Gov. Chris Christie, the president’s debate coach, said after the debate on ABC News. “Listen, you come in, decide you want to be aggressive and that was the right thing to be aggressive, but that was too hot. And I think that what happens is, with all that heat, as you said before, you lose the light.”

For viewers at home, the display was unnerving — the sitting president goading and talking over his rival, matched with a two-term former vice president reduced to name-calling. Moderator Chris Wallace of Fox News struggled to maintain order, reminding Trump frequently that his own campaign had agreed to the rules of the debate. CNN anchor Dana Bash, flabbergasted, called the event a “s---show” on live television after it was over.

In a CBS News poll of debate watchers, 69% described themselves as “annoyed” while another 19% said they were “pessimistic.”

The intent of Trump’s strategy was apparent in Biden’s performance: the vice president offered some of his best answers of the night on issues like voting rights and the president’s tax returns when given stretches of uninterrupted time. He gave an emotional tribute to his son, Beau, an Iraq War veteran who died of brain cancer.

At other times Biden adopted a look of weary resignation as he struggled to wrangle a president who revels in confrontational insults and made-for-TV verbal sparring. Biden seemed to struggle under some of Trump’s barrages — particularly involving his family — simply repeating that the president’s statements were untrue.

“Will you shut up, man?” Biden said to Trump at one point.

Investors who have already been grappling with concerns that the election might not be easily settled and that lawmakers in Washington will remain too divided to pass another stimulus deal will now need to interpret a historically chaotic night. Assets ranging from currencies and gold to stocks and interest rates were already reflecting an unusual potential for sharp moves around and after Election Day.

But the frenetic pace and sloppy arguments meant the former vice president at no point committed a debate-night gaffe likely to jeopardize his steady lead in the race. And for Trump, his behavior seemed only to solidify — or even worsen — existing perceptions, while doing little to change the underlying dynamics.

Trump’s biggest miscue of the night was his hesitation to condemn White supremacist organizations under pressure from both Wallace and Biden. When Wallace asked a second time what he would say to the Proud Boys, a violent White nationalist group, Trump said they should “stand back and stand by.” But, Trump added, “This is not a right-wing problem, this is a left-wing problem.”

Trump consistently gets low ratings for his combative style. A New York Times/Siena College poll released Sunday showed that 34% approve of his efforts to unify America — even less than the 41% who approve of his handling the coronavirus.

And while 35% of Americans say the country’s political divisions will get worse if Biden is elected, half of all Americans believe a second Trump term would further fracture the country.

That image is a particular problem with women and independents, two thirds of whom say he’s doing a poor job bringing the country together.

A focus group of undecided voters conducted by Republican pollster Frank Luntz after the debate saw voters acknowledge that the president dominated the debate — but reject his tactics. The majority described Trump negatively, with one Pennsylvania woman saying she was now voting for Biden because the president acted like a “crackhead.”

Whitney Mitchell Brennan, a Democratic strategist tracking suburban women in the election, said that Trump’s demeanor throughout the debate cost him. She was texting with female friends from across the political spectrum during the debate, and they all were upset by what they saw as disrespectful behavior toward Biden and Wallace.

“I think he turned off suburban swing women with this, and they’re the very voters he needs to win over right now,” she said.

The president’s allies defended his approach, saying he had succeeded in raising questions about Biden’s son Hunter work overseas and appearing to be the more agile debater. And, they argued, Wallace’s criticism of Trump fed the notion — particularly acute among the president’s core supporters — that the media was working against him.