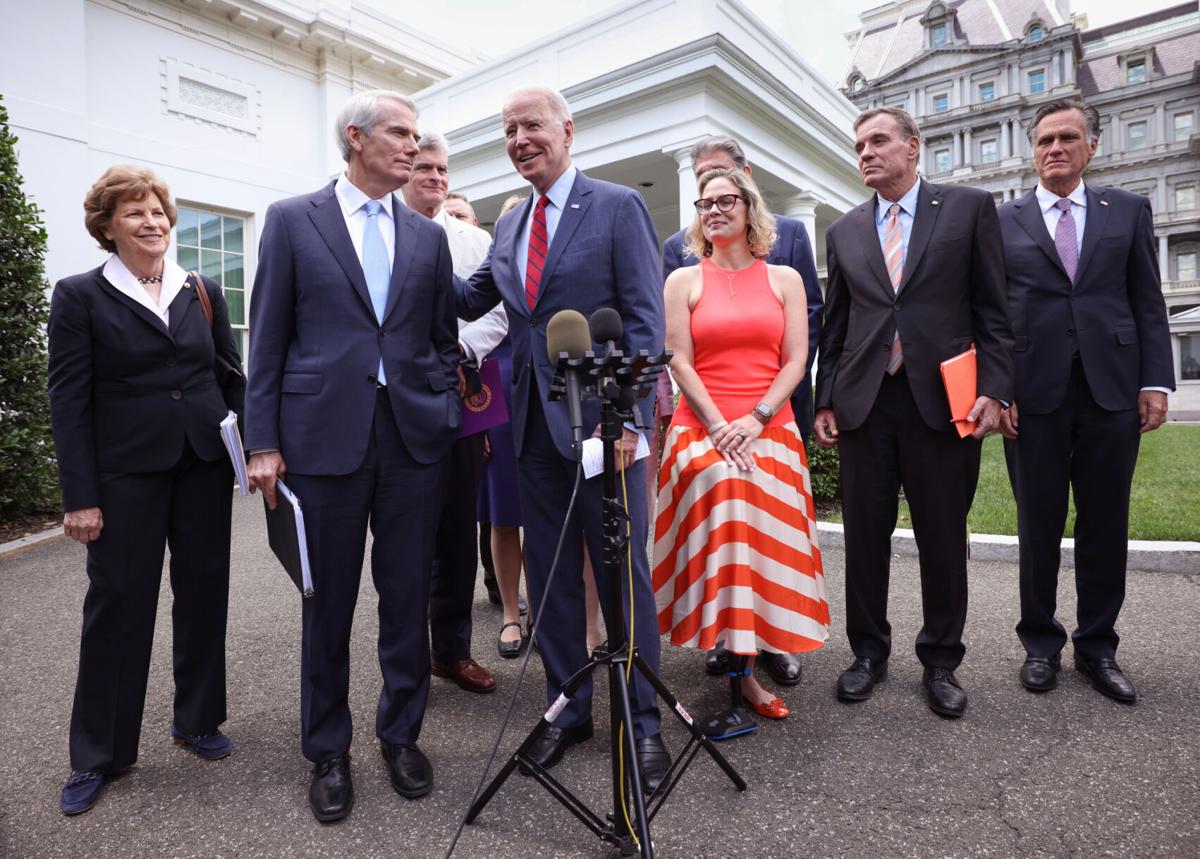 President Joe Biden, center, joined by a bipartisan group of senators who reached a deal on an infrastructure package, at the White House on June 24, 2021, in Washington, D.C. (Kevin Dietsch/Getty Images/TNS) 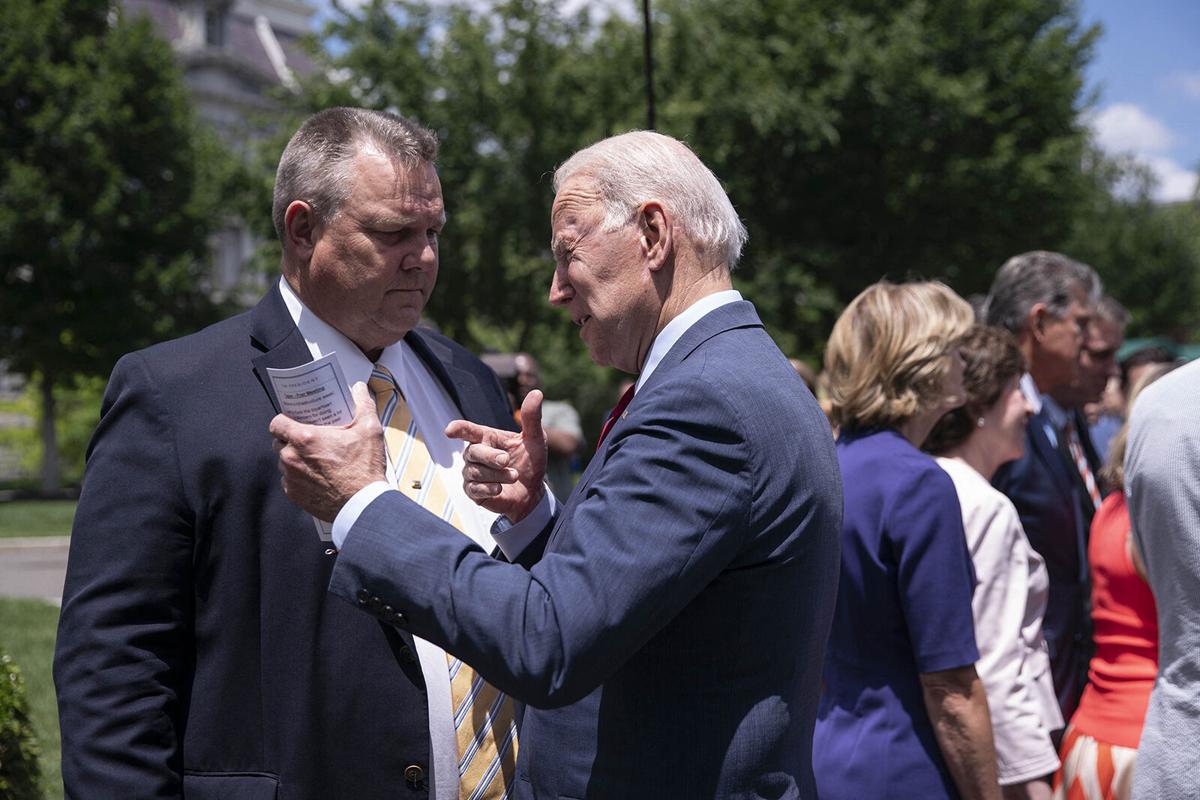 President Joe Biden speaks to Sen. Jon Tester, D-Mont., as senators speak to reporters outside of the West Wing of the White House following a meeting with a bipartisan group of senators where they reached a deal on an infrastructure plan in Washington, D.C., on Thursday, June 24, 2021. (Sarah Silbiger/Pool/ABACAPRESS.COM/TNS)

President Joe Biden, center, joined by a bipartisan group of senators who reached a deal on an infrastructure package, at the White House on June 24, 2021, in Washington, D.C. (Kevin Dietsch/Getty Images/TNS)

President Joe Biden speaks to Sen. Jon Tester, D-Mont., as senators speak to reporters outside of the West Wing of the White House following a meeting with a bipartisan group of senators where they reached a deal on an infrastructure plan in Washington, D.C., on Thursday, June 24, 2021. (Sarah Silbiger/Pool/ABACAPRESS.COM/TNS)

This editorial was written by the Pittsburgh Post-Gazette editorial board.

President Joe Biden remembers when Congress worked differently. He’s not alone. And now, thanks to some old-fashioned political bargaining, the nation stands to benefit with a long-needed federal infrastructure plan.

Getting to this point was far from a sure thing. The president held off months’ of calls from his own party to give up his bipartisan pipe dream and ram through a deal with Democrats alone. Likewise, Republicans who sought to find common ground on the issue faced the potential wrath of partisans opposed to doing any deal with the Biden administration.

This, of course, is how the legislative process is designed to work. A little give, a little take. Some good-faith bargaining. All with an eye toward actually solving a problem for the constituents.

Not surprisingly, Sen. Rob Portman was front and center in this group. The two-term Republican from Ohio who will retire at the end of this year has long worked effectively on bipartisan problem solving, even as the din of partisan rancor and silly showmanship has distracted the nation’s attention.

His is the style that used to dominate the House and the Senate, of course. American government is meant to function by compromise with lawmakers looking for partners across the aisle to hammer out deals. At least that was how it used to work before cooperating with anyone from the other party to accomplish anything became poison in Washington.

For at least four years, the need for a federal infrastructure bill has seemed like an obvious, logical place to begin rebuilding a bipartisan way of doing business. With every deteriorating bridge that had to be closed down, every study on the dangers of ancient lead-lined water pipes, and every failing dam, it seemed that it should have been a cinch to sell a large-scale federal reinvestment in the nation’s infrastructure regardless of whether that long-neglected infrastructure was in a blue state or a red state.

And yet, after Biden pitched his massive initial $2 trillion plan, the prospect of working out a bipartisan compromise on the issue looked dim. He looked for partners among Republican senators and fended off complaints from those in his own party that doing so was nothing but a waste of time.

The deal they worked out with the White House -- $973 billion over five years or $1.2 trillion over eight years -- looks like a refreshing throwback to a more constructive era.

The proposal calls for spending $109 billion on roads and highways, $15 billion on electric vehicle infrastructure and transit systems and $65 billion toward broadband, among other expenditures on airports, drinking water systems and resiliency efforts to tackle climate change.

The deal is far from sealed, of course. The progressive wing of the Democratic Party decries it as not ambitious enough while Republicans have threatened to balk if the deal is tied to a larger American Families Plan.

But the good news is that elected leaders seem to have had a wake-up call that reminded them how work should get done in Washington. The fringe elements of both parties need to see this for what it is -- a win for everyone and potentially a foundation upon which to rebuild a functioning two-party governance that works. (c)2021 the Pittsburgh Post-Gazette Visit the Pittsburgh Post-Gazette at www.post-gazette.com Distributed by Tribune Content Agency, LLC. (C)2021 PG Publishing Co. Visit at post-gazette.com. Distributed by Tribune Content Agency, LLC.