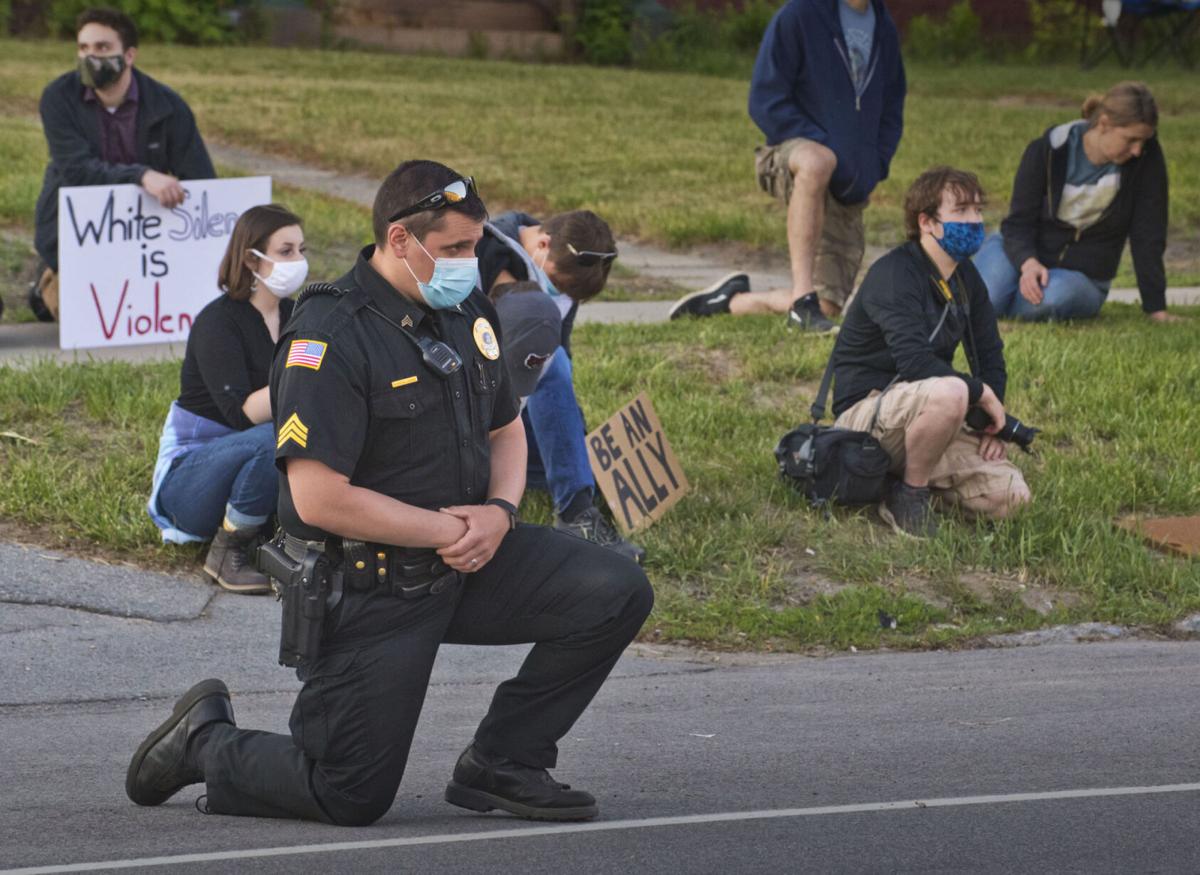 Potsdam police officer Corbin Gates-Shult takes a knee Monday along with others in attendance during a moment of silence at a rally in support of justice for George Floyd in front of the U.S. Postal Service facility in Potsdam. Christopher Lenney/Watertown Daily Times 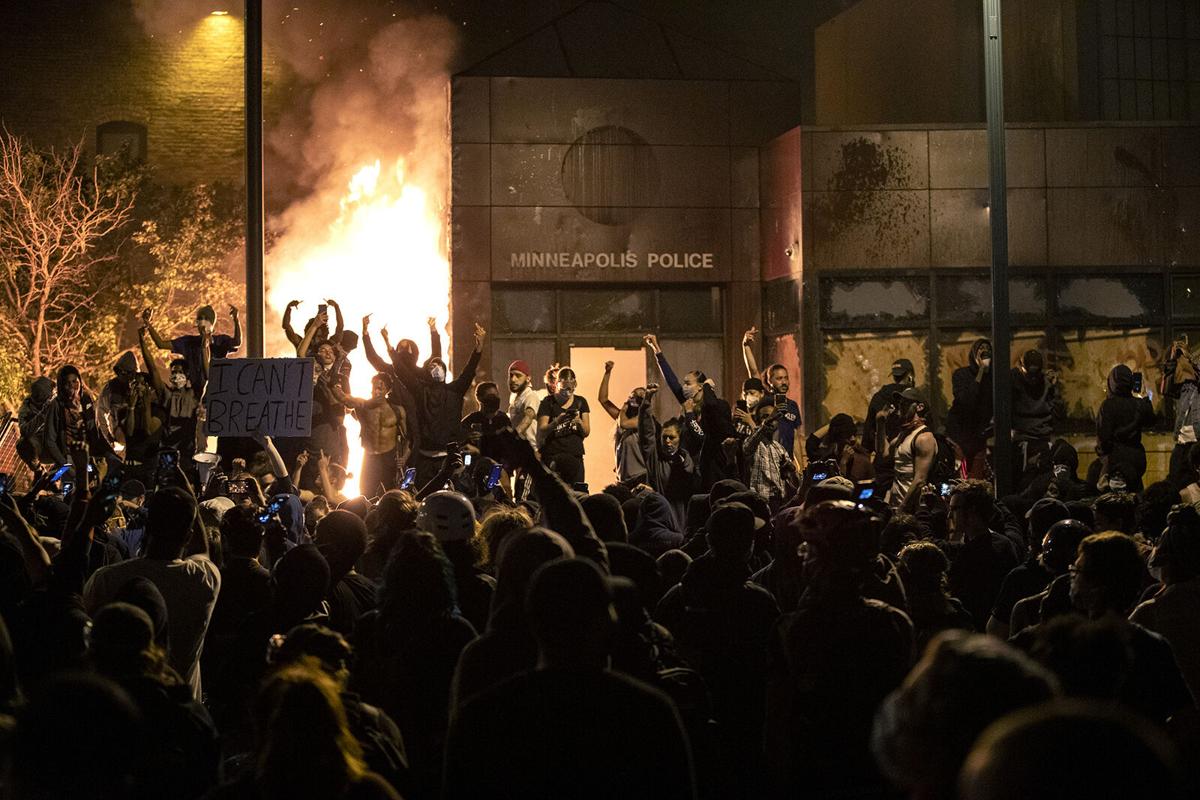 The Minneapolis Third Police Precinct is set on fire Thursday during a third night of protests following the death of George Floyd while in Minneapolis police custody. Carlos Gonzalez/Minneapolis Star Tribune/Tribune News Service

Potsdam police officer Corbin Gates-Shult takes a knee Monday along with others in attendance during a moment of silence at a rally in support of justice for George Floyd in front of the U.S. Postal Service facility in Potsdam. Christopher Lenney/Watertown Daily Times

The Minneapolis Third Police Precinct is set on fire Thursday during a third night of protests following the death of George Floyd while in Minneapolis police custody. Carlos Gonzalez/Minneapolis Star Tribune/Tribune News Service

The horrific legacy of black Americans needlessly killed by police officers in this country has continued, and many people have had enough.

The latest tragedy involved George Floyd in Minneapolis. He was accused of passing a counterfeit $20 bill and was confronted May 25 by police officers.

One officer, Derek Chauvin, pinned Mr. Floyd to the ground and placed a knee on his neck for about nine minutes. Mr. Floyd’s hands were handcuffed, so it’s uncertain why the officer felt the need to keep him in this position.

Mr. Floyd repeatedly said that he couldn’t breathe. He died, thus adding another sad chapter to this part of our nation’s history.

The death of Mr. Floyd has sparked protests around the world.

As with other black citizens killed under dubious circumstances by law enforcement agents, demonstrators want answers as to why these dreadful events keep occurring. Most importantly, activists want them to stop — now!

Some of the protests here in the United States turned violent, with shop owners assaulted while trying to protect their businesses, stories being looted and property destroyed by arsonists. This is appalling and unjustified.

We understand that some people are tired of hearing excuses from government authorities. They believe that only drastic acts such as vandalism will get the attention of those who need to make changes in the way police officers are trained. They’ve heard empty promises too many times, and they feel they must take matters into their own hands.

But further violence will only breed resentment. People who sincerely want to see this process reformed have to bring a broad spectrum of Americans to their side to have any hope of implementing the necessary changes. Beating up merchants and burning stores won’t endear these people to the majority of citizens, and this will help defeat what most demonstrators want to accomplish.

But just the same, government authorities must listen to the voices of the protesters. They need to take this message seriously and show they’re committed to bringing about vital reforms.

We’re fortunate that demonstrations in the north country over the weekend remained peaceful. However, avoiding violence on the part of protesters is only part of the process of ensuring law and order that must occur.

The list of black Americans who have died senselessly at the hands of police officers is frightfully long.

Eric Garner of New York City died in 2014 in a manner similar to Mr. Floyd. Several officers tried to subdue him, and one put Mr. Garner in an illegal chokehold. Mr. Garner cried out that he couldn’t breathe before perishing.

Atatiana Jefferson was shot to death in October in Fort Worth, Texas, as she babysat her nephew. Dominique Clayton of was killed by an officer in Oxford, Miss., in May 2019 while sleeping in her bed. Botham Jean died when he was shot in September by an off-duty Dallas police officer who mistook his apartment for her own.

Tamir Rice was shot in 2014 by a Cleveland police officer responding to a call about someone in a park with a gun. The officer shot the 12-year-old boy less than 2 seconds after exiting his squad car. Tamir had a BB gun but wasn’t holding it at the time of the shooting.

These killings must stop. Black Americans have a right to know that the color of their skin will not imperil their lives at the hands of other people. The proper response to demonstrators is to show reform measures are being put into place and that all citizens will be protected by those tasked overseeing with public safety.