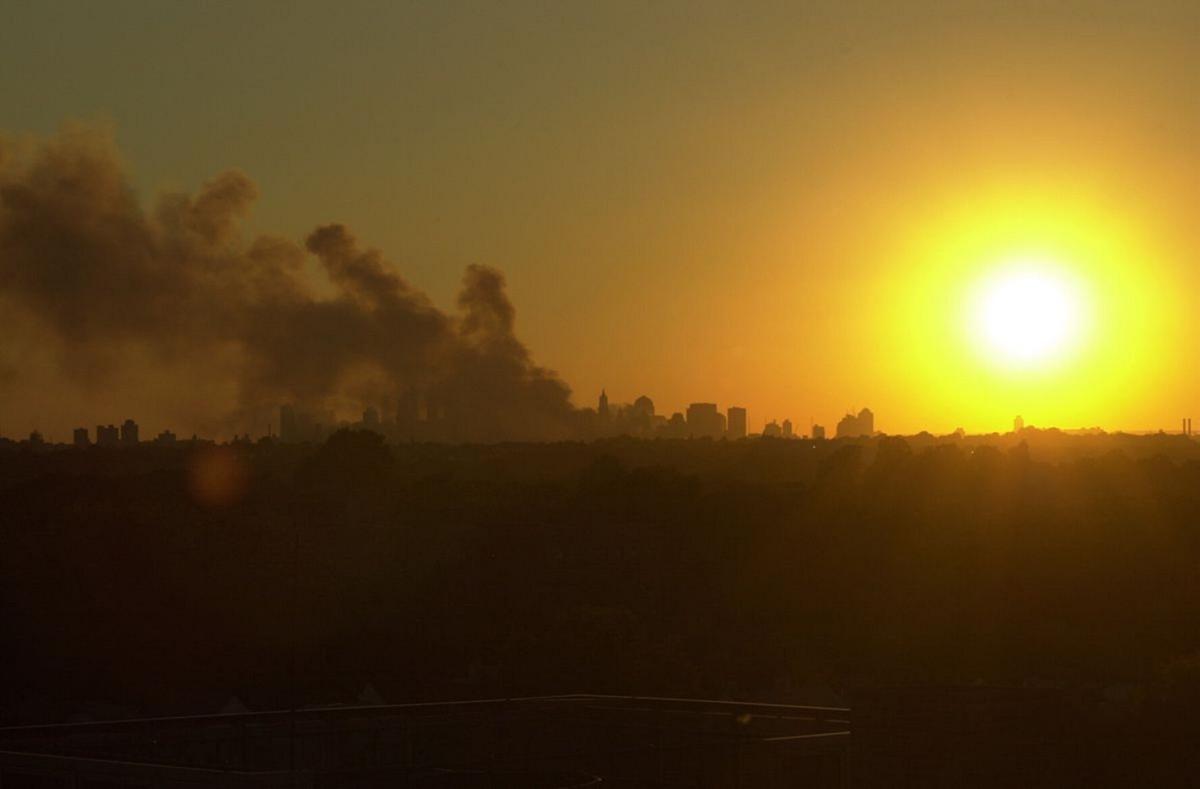 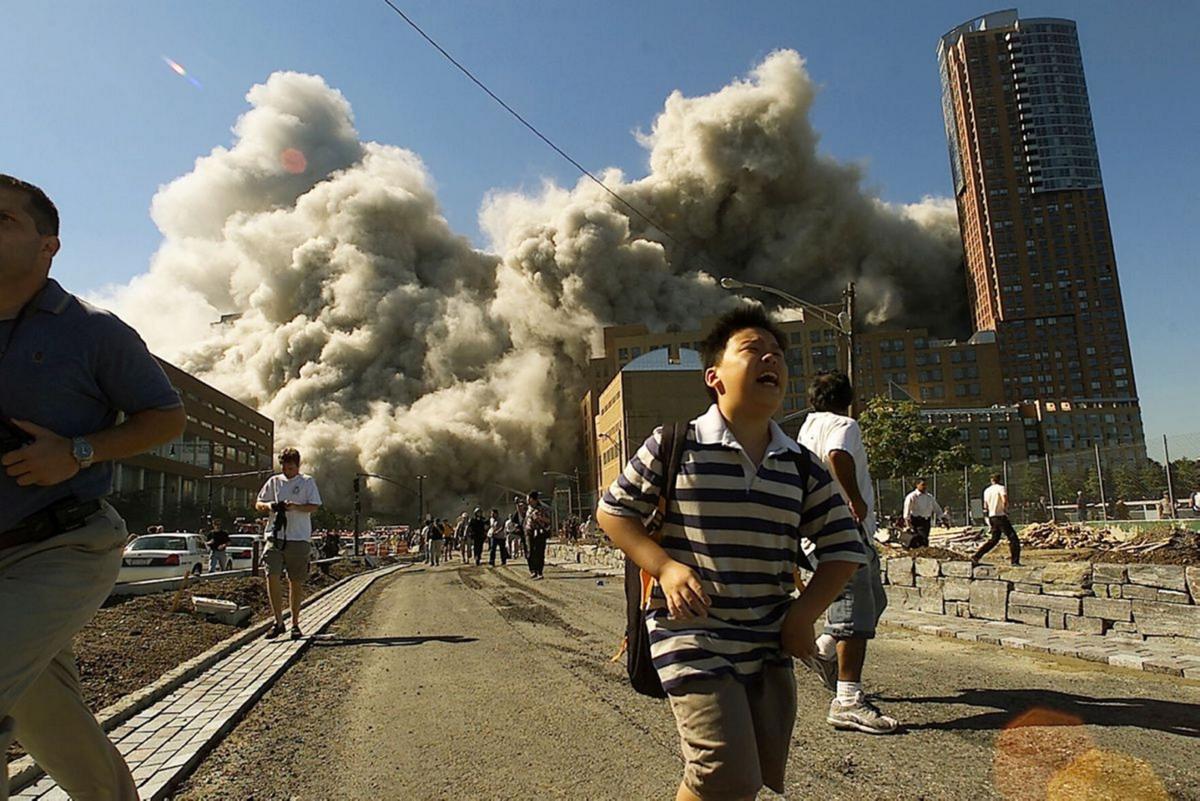 People run away as the North Tower of World Trade Center collapses on Sept. 11, 2001.Â That day, 2,977 people were lostÂ from the fourÂ highjacked plane attacks, includingÂ 246 passengers and crew. 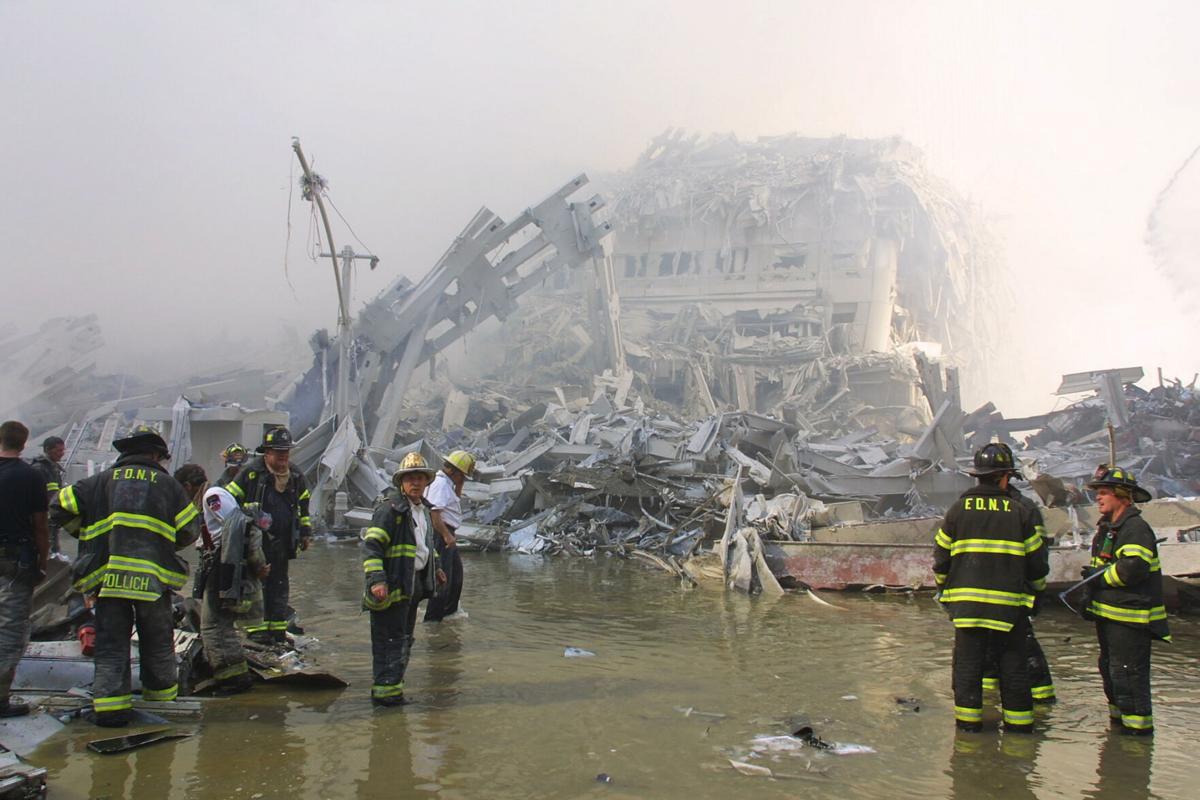 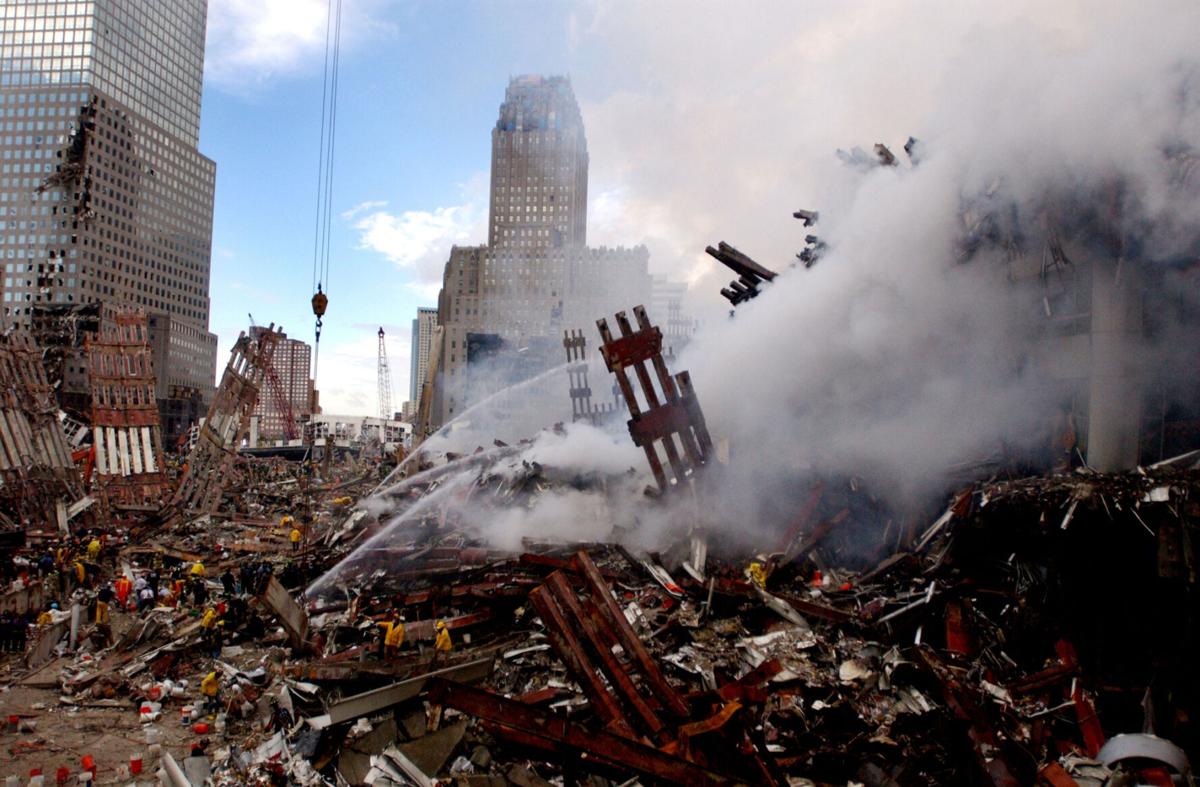 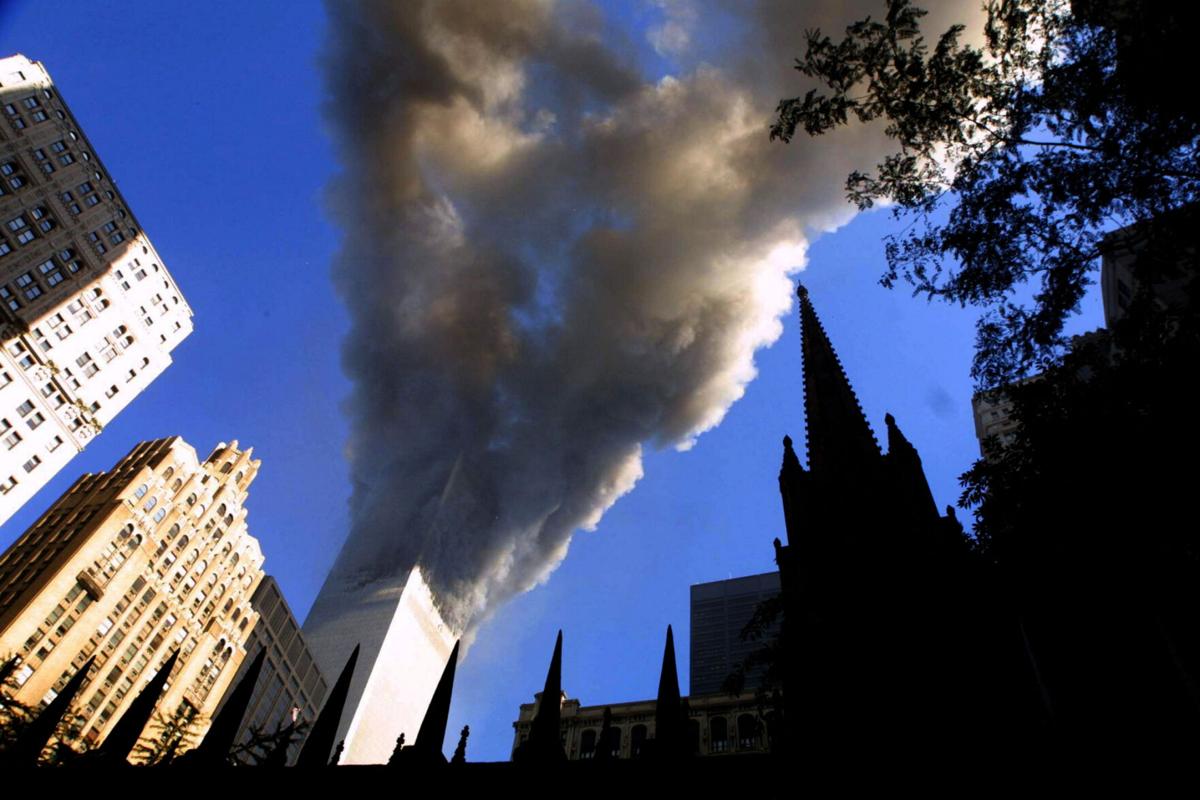 Smoke spews from a tower of the World Trade Center on Sept. 11, 2001, after two hijacked airplanes hit the twin towers in a terrorist attack on New York City. (Mario Tama/Getty Images/TNS)

People run away as the North Tower of World Trade Center collapses on Sept. 11, 2001.Â That day, 2,977 people were lostÂ from the fourÂ highjacked plane attacks, includingÂ 246 passengers and crew.

Smoke spews from a tower of the World Trade Center on Sept. 11, 2001, after two hijacked airplanes hit the twin towers in a terrorist attack on New York City. (Mario Tama/Getty Images/TNS)

The 20th anniversary of the Sept. 11, 2001, terrorist attacks on the United States brought messages from a variety of elected officials.

Nineteen terrorists from al-Qaeda hijacked four commercial airplanes, deliberately crashing two of the planes into the upper floors of the North and South Towers of the World Trade Center complex and a third plane into the Pentagon in Arlington, Va.

After learning about the other attacks, passengers on the fourth hijacked plane, Flight 93, fought back, and the plane was crashed into an empty field in western Pennsylvania about 20 minutes by air from Washington, D.C.

SENATE REPUBLICAN LEADER ROB ORTT, R-North Tonawanda: “It was 20 years ago today that the worst terrorist attack in our nation’s history took 3,000 American lives. I want to remember all those who lost their lives that day, and the families who have struggled with that burden every day since. While today is a day of remembrance, it’s also a day and a reminder of a call to duty as Americans. I answered that call after 9/11 as a young man, joined the United States Army, and ultimately served my country in Afghanistan. When I returned home, I continued that service as Mayor of my hometown North Tonawanda, and now as a state Senator. Today, it’s a different world. There’s a lot of turmoil. There’s a lot of division. But I would ask each and every one of you to remember that feeling -- the way we come together as Americans, united in a common cause. That America, that came out of 9/11, can accomplish any challenge and overcome any obstacle to achieve the highest dreams and possibilities that our nation holds. That’s the goal and lesson on 9/11 and always. Never forget.”

ASSEMBLY SPEAKER CARL HEASTIE: “Twenty years ago, our nation experienced one of the most devastating attacks in U.S. history that took the lives of nearly 3,000 people. For New Yorkers, the events that unfolded that day shook us to our core and overwhelmed us with a shared sense of grief.

“In the days and months that followed, Americans – and especially New Yorkers – came together in an unprecedented time of unity and demonstrated our resiliency.

“Today, I join New Yorkers, and all Americans, in remembering the lives lost and reflecting on how far we have come.”

REP. CHRIS JACOBS, R-Orchard Park: “20 years ago today, our nation came under attack from a foreign enemy, and we lost 3,000 American mothers, fathers, sisters, brothers, friends, and heroes. It was one of our nation’s darkest hours – clouded by smoke, fear, and uncertainty. We did not know what tomorrow held, let alone the next few hours. But we also witnessed the true meaning of what it means to be an American. Amidst that uncertainty and fear, we witnessed bravery and courage, and selflessness that made each of us proud to be an American.

“Our first responders and regular citizens alike rushed into the flames and collapsing buildings to save their fellow Americans, many losing their own lives in the process. And a whole generation of Americans enlisted in our nation’s military to go overseas and bring to justice each and every single person who sought harm against our nation. America was tested in our resolve, and in true American fashion, we banded together emerged stronger than we were before.

“It has now been two decades since that day – but the pain and clarity of it still remain recent in our minds. Today, 20 years later, we remember our fallen brothers and sisters, and we honor the brave men and women who ran into darkness to save lives and defend our nation. They were true American heroes, as is every single service member who has spent the last 20 years keeping our nation safe. Our nation is eternally grateful for that service, and our nation will never forget.

“So today, reflect on the events of 20 years ago, take a moment to honor those who perished, those who fought, and those who continue to fight and pass on the memory of those heroes and this day to the new generation who were not alive in 2001. God bless the United States of America.

ASSEMBLY MINORITY LEADER WILL BARCLAY, R-Pulaski: “Today we honor the memories of the thousands of Americans who died during the September 11, 2001 terrorist attacks. As a nation, we have always persevered in the face of adversity, no matter how great the challenge. During the last 20 years, we have shown the world that our will, our resolve and our spirit are unbreakable. On this somber occasion, our hearts are with the innocent victims and the families whose lives were forever impacted by the events of that day. As all Americans take time to reflect on that tragic day 20 years ago, it must be our promise to those we lost – we will never forget.”

STATE COMPTROLLER THOMAS DiNAPOLI: “As we mark the 20th Anniversary of the September 11th terrorist attacks, we remember those who lost their lives, those who rose to serve and the sacrifices made by those who responded to that day’s tragic events. We come together in New York and across the nation with solemn remembrance and the vow that we will never forget.”

STATEMENT FROM CHANCELLOR YOUNG, THE BOARD OF REGENTS AND COMMISSIONER ROSA: “Twenty years ago Americans watched in horror as the terrorist attacks of 9/11 irrevocably transformed the world we knew. We commemorate the approximately 3,000 people who were killed, the families who lost cherished loved ones, and the survivors who are still dealing with the aftereffects of that horrible day today and every day.

“New Yorkers will forever bear on our hearts the scars left behind within the footprint of the World Trade Center. The memories are profoundly personal for those of us who call New York City home.

“With the passage of time, it is becoming increasingly crucial to keep this history alive in a meaningful way and to reach out to a new generation of students who were born long after these events that continue to affect our world, nation, state, and community.

“There is a lesson for all of us in the words of Sandy Dahl, wife of Flight 93 pilot Jason Dahl: “If we learn nothing else from this tragedy, we learn that life is short and there is no time for hate.” As educators, we have a duty to instill this important sentiment to all New York’s children.

“This morning, just as we have done for the last twenty years, we pause to remember the victims of the worst attack on United States soil in our nation’s history. But this year, the 20th anniversary of 9/11, takes on a particular significance. For the families who lost loved ones, the pain and sadness are just as raw. For those who narrowly escaped the same fate, their reminder is just as poignant. We vowed on that solemn day to never forget. I know I am not alone in asking the question: have we kept our promise?

“The weather in New York City today is eerily reminiscent of September 11, 2001. Blue skies, sunshine, and that hint of crispness that comes with the warmth of the September sun. Despite the pandemic, people are going about their lives--business as usual--just as they did 20 years ago. I think of the nearly 3,000 New Yorkers who went to sleep 20 years ago tonight, not knowing what the morning would bring. I think of the harrowing phone calls from passengers of the hijacked planes trying desperately to reach their loved ones to say goodbye. I think of the heroism of the first responders who rushed toward the towers when everyone else was running away. I think of the countless selfless Americans from across the country who traveled to the pile to search for remains and have since suffered grave illness and death from their herculean efforts. I think about the children of the FDNY, NYPD, Port Authority Police, and others who followed their parents into a life of service. I think about incredible charity organizations like Tunnel to Towers that was born out of tragedy but has changed the lives of so many families of our injured and fallen heroes. I think about the young men and women who enlisted after 9/11 to ensure that nothing like that ever happened again in America-- and the more than 7,000 members of the United States military who were killed in Iraq and Afghanistan, including the 13 service members we lost just two weeks ago.

“These souls and their stories are woven into the fabric of America. They represent our darkest hour and our brightest light. We honor them by remembering, but more importantly, by learning. Twenty years have passed and the threat of terrorism from those who want to destroy our way our life is just as real. Their zest for their cause has not abated--and neither can our resolve. An America that takes for granted our freedoms--and those who lay down their lives to protect them--is an America that is doomed. We began the greatest experiment in the world 245 years ago with no promises or guarantees. How we have lived, fought, died, and governed ourselves every day since has dictated America’s strength and survival. The heroes of 9/11 and the resiliency of our citizens in its aftermath must serve as a source of inspiration to us, always. It is our duty to honor their memory and teach the next generation the true meaning of being an American.

“May God bless our nation and protect our fellow citizens from evil.”