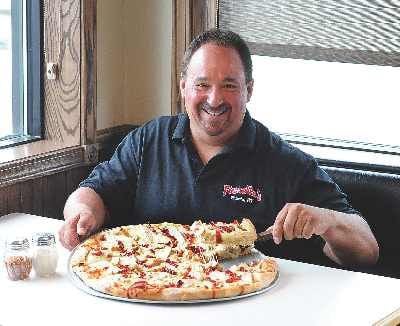 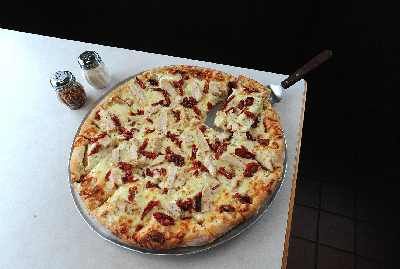 BATAVIA — While pizza is believed to have existed since the 10th century, the modern form we all eat by the truckload originated in Naples, Italy around the late 1700s.

At Ficarella’s Pizzeria, 21 Liberty St., owner Nick Ficarella created his signature dish by combining pizza with a cuisine from further north in Italy. His Tuscan Grilled Chicken Pizza is one of 12 specialty pies on the menu and uses the tastes of the Tuscany region.

“Tuscan food is very light,” said Ficarella, as he showed off his prized pizza that uses three kinds of cheese, a garlic and herb sauce, and sundried tomatoes. “That’s why it’s different. Some dishes are made with tomatoes, so that’s why I added the sundried tomatoes on top.”

Tuscan chicken is generally brushed with olive oil and sprinkled with Italian herbs.

“I always wanted to have something different,” he said. “I felt we should have some specialty pizzas on the menu, in addition to our regular pizzas. So I came up with these items. Not everybody orders them, but a lot of people will go out of their comfort zone to try them. They do sell pretty good.”

Ficarella and his crew also came up with the idea for the Tuscan Grilled Chicken Pizza, which Ficarella admitted is his favorite.

“To me, I think it’s the best one on there,” he said. “It’s not over-filling, it’s not too rich. It’s light; you could eat three or four pieces and be satisfied.”

The pizza makers at Ficarella’s start by brushing the dough with a garlic white sauce. They then add ricotta cheese, mozzarella cheese, the grilled chicken and sundried tomatoes.  It’s topped with a special seasoning mix and romano cheese.

The three cheeses complement each other, as each provides a distinct taste and texture. The ricotta provides a creamy base, the mozzarella is gooey, and the romano packs a sharp kick at the end.

“It all blends together,” Ficarella said. “It’s not overpowering.”

The mixture of ingredients was an immediate hit at the pizzeria. Ficarella’s will sell about 20-25 of them in a week.

Since this is Western New York, and pizza is almost always paired with chicken wings, what is the best complement to the Tuscan Grilled Chicken Pizza? Certainly not the garlic parmesan wings, since that would overload on the same flavors.

“I would have to say something sweet like the sweet and sour or barbecue,” Ficarella said.