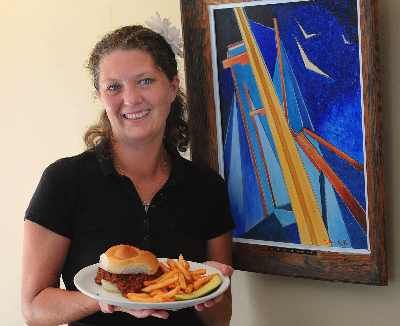 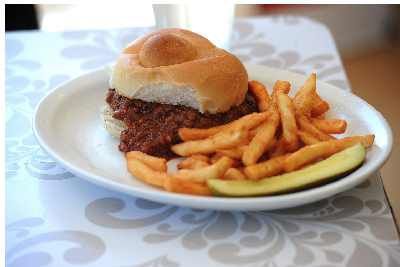 KENT — Anyone who orders a sloppy joe at the Breeze Inn Again Café, will be quickly — but politely — corrected. You see the new eatery doesn’t offer a sloppy joe; it serves a Sloppy Joey.

The signature dish at the eatery that opened two months ago in the lakefront community of Point Breeze is a different take on the classic sandwich. As co-owner Nicole Bellnier explains it, the Sloppy Joey has the typical ground beef in tomato sauce, but adds barbecue sauce and crushed red pepper for a “little kick.”

The sandwich is named after Bellnier’s friend Joey Haines, who died last year.

“She just had so much spirit that it couldn’t be held to this little town,” Bellnier said of her friend, who was “family by choice.” “She believed in Point Breeze, and she believed in me.”

As the Bellniers — Nicole owns the restaurant with her husband Ed — began preparing a menu last year, they received a suggestion from Haines’s niece to serve a Sloppy Joey. But they didn’t know what a Sloppy Joey was. They had to create one.

“I started thinking about the sauce for it and I thought about how most people walk, but Joey skipped,” Bellnier said. “That’s why I added the crushed red pepper and the barbecue sauce. We say it’s a sloppy joe with a kick, because Joey always had a kick in her step.

“You couldn’t be around that woman and not smile. She made your day brighter.”

Bellnier begins cooking her Sloppy Joey by adding the ground beef, her mother’s marinara sauce, and homemade barbecue sauce together and cooking them on a low simmer for about an hour. It’s then ladled over a knot roll and served with a handful of crispy french fries and a dill pickle spear. It also comes with extra napkins. It’s called a “Sloppy” Joey for a reason.

While the Sloppy Joey is a sandwich, make no mistake, this is a knife-and-fork meal. Even though the roll is grilled to prevent it from going soggy, eating a Joey with two hands isn’t advisable. The filling is likely to all spill out onto the plate.

The café has only been open for two months, but word is spreading about the Sloppy Joey. The eatery, which is primarily a breakfast spot, sells about 10 of the sandwiches a week.

“We have at least four people who come in at least once a week — they’re regulars — and the only thing they’ve tried on the menu is the Sloppy Joey,” Bellnier said. “They won’t try anything else. When I have a group of people that from the first thing they tried on a brand new menu in a brand new restaurant won’t eat anything else, that’s special.

“We have this guy Larry who comes in and sits at the bar. I don’t even have to look at him anymore, I just put a Sloppy Joey in front of him. That’s why it’s our signature. Everyone makes burgers, but this is the only place you’re going to get something like this. It may not be our best seller, but it’s the one the people are the most passionate about.”

The Sloppy Joey sells for $7.