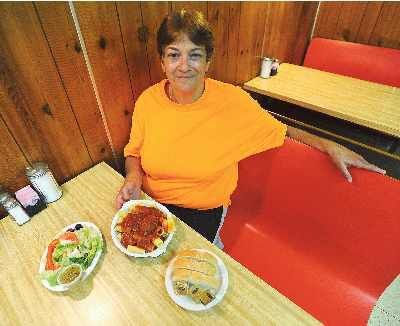 Laura Salvania, co-owner of Salvania’s Restaurant in Batavia has been serving up bowls of rigatoni by the dozen since the eatery opened 34 years ago. (Rocco Laurienzo/Daily News) 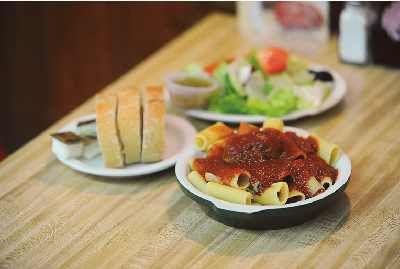 The rigatoni at Salvania's Restaurant in Batavia sells for $6.50 with meatball and $6.95 with Italian sausage and comes with a side salad and bread. (Rocco Laurienzo/Daily News)

Laura Salvania, co-owner of Salvania’s Restaurant in Batavia has been serving up bowls of rigatoni by the dozen since the eatery opened 34 years ago. (Rocco Laurienzo/Daily News)

The rigatoni at Salvania's Restaurant in Batavia sells for $6.50 with meatball and $6.95 with Italian sausage and comes with a side salad and bread. (Rocco Laurienzo/Daily News)

BATAVIA — Laura and Roxanne Salvania opened Salvania’s Restaurant 34 years ago — today! — and wrote “rigatoni” on the specials board. It has been there ever since.

The pasta with red sauce is easily the eatery’s most popular item, ordered upwards of 30 times a day, according to Laura Salvania. Dishing out that much rigatoni requires a lot of sauce, meatballs and Italian sausage, all of which have helped turn the simple meal into the signature dish at Salvania’s, 41 Jackson St.

“We’ve made a living on it for 34 years,” Salvania said Tuesday from one of the booths on the back wall, an autographed drawing of Jim Kelly over her shoulder. And she was right. In a 45-minute period, six different diners ordered the same lunch.

But why rigatoni. The restaurant also offers spaghetti, but diners have spoken with their orders that rigatoni is the preferred pasta.

“It’s easier to eat,” Salvania explained. Spaghetti is pretty messy. Rigatoni is shorter and doesn’t splash the sauce around.”

The secret to the dish, as it is with any pasta meal, is the sauce. Using a recipe her grandfather Matthew Salvania brought from Italy in the 1890s, the Salvanias ladle out about 8 gallons of the sauce each day. It’s a thin, sweet red sauce that goes pretty heavy on the Italian seasoning and has a strong tomato taste.

“My grandpa brought it with him, because he was the master chef,” Salvania said. “He would make all the sauce for the families. Then he taught his kids how to make it, and it’s been passed down ever since.”

Through 125 years, the recipe has remained unaltered. When asked if anyone had ever thought of doctoring it, Salvania scoffed and shot back “Oh, God, no.” Why mess with a good thing, right?

While the dish comes with either a meatball or sausage, the meatball is clear favorite. Salvania’s will sell about 50-60 of them in a day. About the size of a racquetball, the meatball is well-seasoned and juicy. The secret, Salvania says, is the pecorino romano cheese in it.

The bowl of rigatoni comes with a garden salad — definitely get the homemade Italian dressing with it — and three slices of bread with butter.

Having been in business for more than three decades, Salvania fields a lot of questions from her regulars about when she’s going to walk away from the restaurant.

“I don’t think about that, because, what would I do,” she asked. “I need people. I have to see people every day. I enjoy it.

“I never thought we would be open this long. I figured maybe 10 years. I thought I would put in 10 years then move on. But it developed, and we’re still going strong.”