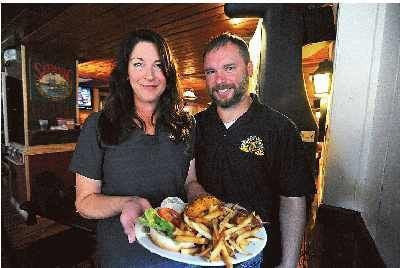 Kristi and Tommy Streamer, owners of the Amber Lantern Bar & Restaurant in Warsaw, show off their signature dish, the Max Burger with a side of homemade french fries. (Rocco Laurienzo/Daily News) 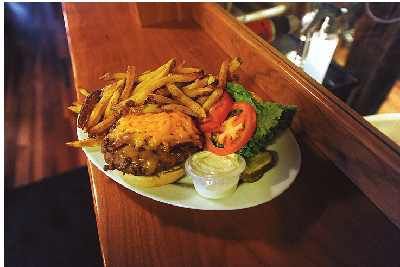 Kristi and Tommy Streamer, owners of the Amber Lantern Bar & Restaurant in Warsaw, show off their signature dish, the Max Burger with a side of homemade french fries. (Rocco Laurienzo/Daily News)

WARSAW — The Amber Lantern Bar & Restaurant has a way of keeping things in the family. Not only has it been family run for close to 30 years, but the signature burgers are all named for family members.

So if you’re looking for a burger with Swiss cheese, onion rings and barbecue sauce, try the Ryan. Want one with Velveeta cheese, ham and onion? Order the Amber.

It’s a tradition that began with previous owners Ron and Cyndy Smith. Whenever one of their grandchildren was born, Cyndy would create a new burger and give it the grandchild’s name. The tradition continues with Smith’s daughter, Kristi Streamer, who now owns the restaurant with her husband Tommy.

“My dad has the Smitty burger, which is the first burger my mom ever made when they started,” said Kristi Streamer. The kids came after that.”

Cyndy Smith created all of the burgers, beginning with the Riley (Velveeta and sautéed onions), as soon as each child was named. The children didn’t get to select the ingredients for their own burgers, which is why you won’t find a Kindergartner’s dream of peanut butter and Cap’n Crunch cereal.

The Streamers have two children, Jake and Veronica, who don’t exactly like everything that comes on their namesake burgers. The Jake has pepperoni, mushrooms and mozzarella cheese. The Veronica comes with jalapenos, bacon, cheddar cheese, lettuce, tomato, and mayonnaise.

“It’s funny, because Veronica says she likes to order ‘the me burger,’ but she doesn’t want the jalapenos, lettuce, tomato, or mayo,” Kristi Streamer said. “Basically, she ends up with a bacon cheeseburger. That’s the ‘Me Burger.’ Jake likes his without mushrooms. He does not eat those.”

When I stopped in on Tuesday, the Streamers presented me with the Max Burger. Named for their nephew, the burger comes with bacon, cheddar cheese, lettuce, tomato, and homemade ranch dressing.

The ranch dressing offers a cool taste next to the saltiness of the bacon. But beware. It’s much thinner than mayonnaise, mustard, or ketchup, so it drips onto the plate and the hands. Things can get messy fast. That’s why the Streamers gave me extra napkins.

All burgers are made with half a pound of ground beef and served on a grilled roll.

“Yes, it is a large burger,” Kristi Streamer said. “You can get a smaller burger, but most people, when they make that commitment to a burger, want a burger. So that’s what we offer.”

Each burger comes with a large handful of homemade french fries that were just added to the menu in January, after a miscue left the restaurant void of the side dish.

“We had talked about doing it for a while, and it’s kind of a funny story,” Kristi Streamer said. “We actually ran out of fries.”

So Tommy ran out to the grocery store, purchased a bag of potatoes and cut them by hand.

“I said ‘We’ve got to have fries; it’s Friday night,” Tommy Streamer said, laughing as he looked back on it.

“Then we couldn’t go back,” Kristi Streamer chipped in. “These are awesome.”

The burgers are easily the best sellers at Amber Lantern. Kristi Streamer said the restaurant sold 1,146 of them in June, which works out to about 38 per day.

Each signature burger at Amber Lantern Bar & Restaurant sells for $7.99, but a quarter-pound version is available for $6.99. They all come with homemade french fries and pickle slices.