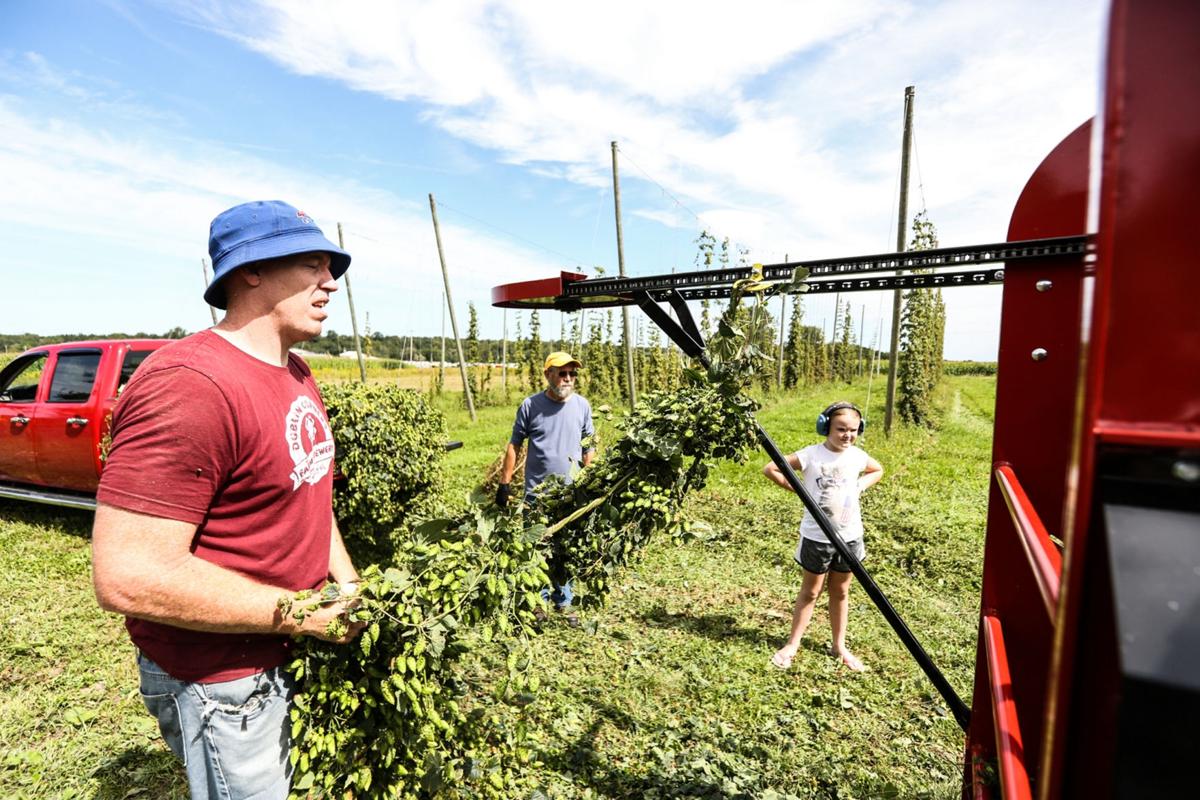 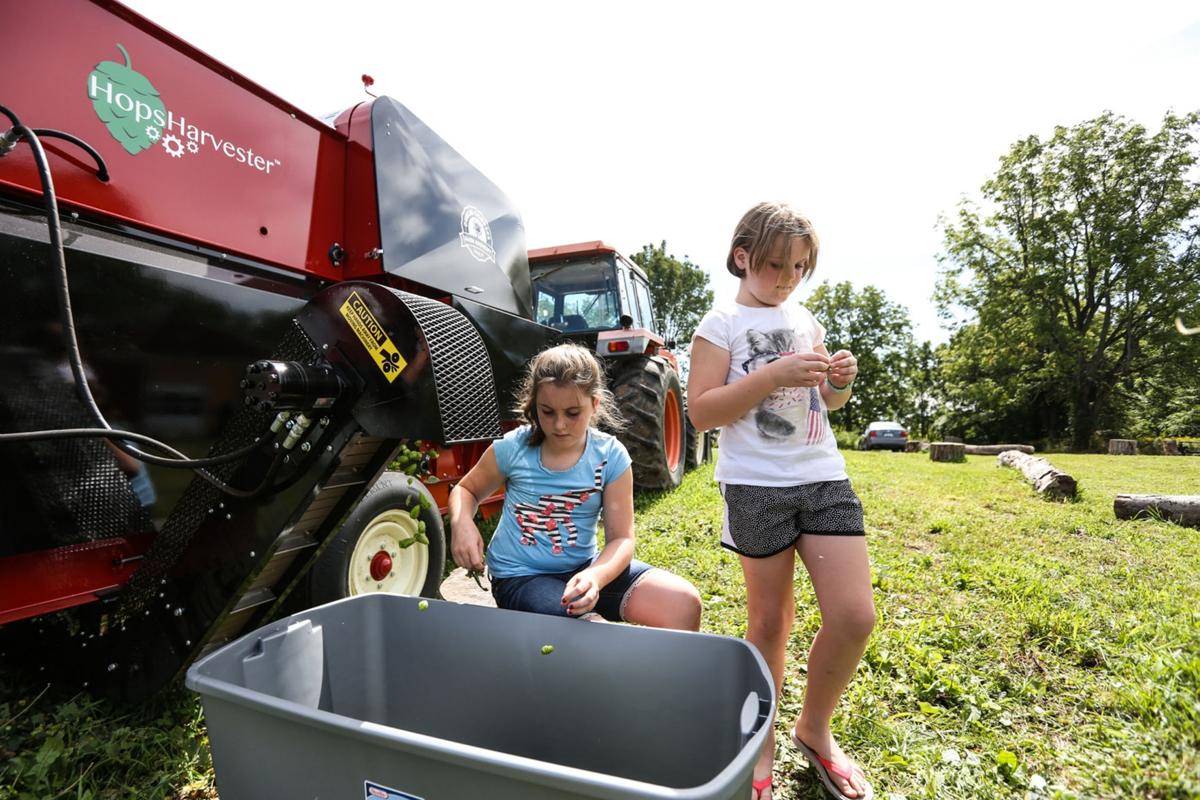 Nick Serrata/For The Livingston County News Felicity Grant, left, 10, and her sister, Fiona, 8, go through hops after the bines were processed through the HopsHarvester at the Dublin Corners Farm Brewery in Linwood.

Nick Serrata/For The Livingston County News Felicity Grant, left, 10, and her sister, Fiona, 8, go through hops after the bines were processed through the HopsHarvester at the Dublin Corners Farm Brewery in Linwood.

LINWOOD – It used to take several weeks of long weekends and late nights to harvest the hundreds of pounds of hops grown outside Dublin Corners Farm Brewery, 1906 Main St., in this York hamlet.

But the purchase of a new machine, called a HopsHarvester, is expected to significantly speed up harvest time and has brewery owners Justin and Heather Grant thinking about possible expansion of their hops garden.

“With the HopsHarvester, we’ll be able to expand with more plants, more variety,” Justin Grant said on a Saturday afternoon last month when he and a small cadre of family and friends rolled out the HopsHarvester for the first time.

Dublin Corners, named this month as most promising new venture in the Livingston County Area Chamber of Commerce’s annual Business Excellence Awards, is a craft brewery on a fifth-generation family farm. The brewery opened in October 2016, culminating a process begun five years prior when the Grants planted their first hops. (The one-year anniversary will be celebrated with a special event on Oct. 28.)

The Grants grow two varieties of hops – Cascada and Wiamette – in a half-acre hops garden adjacent to the brewery.

Hops are a key ingredient in beers, providing the bitterness in the beer and the floral notes that tease the drinker’s nose.

READ MORE: Look in “Tractor Factor,” a special section included in this week’s print editions of The Livingston County News, for more stories about how GLOW-region farms are cultivating innovation to improve efficiency and yields.

But harvesting those hops, a climbing plant which grows on bines, can be a challenge. There may be 120 to 180 bines per acre and it can take about one hour per plant to pick the hops.

That was the challenge John Bonzo, creator of the HopsHarvester, discovered after he planted his own hops in 2009.

“I sort of got the cart before the horse,” Bonzo told the website FarmShow.com. “We started growing hops … and quickly discovered that we weren’t prepared to handle the harvest. We needed a harvester.”

So Bonzo searched for a solution and when he didn’t like what was available sought his own. The HopHarvester is designed for small farms as an entry-level solution that will allow those farms to produce at a commercial scale and profit, according a description on the company website.

Bonzo, director of Brinkman Lab at Rochester Institute of Technology and owner of Mendon Precision, produced his prototype HopsHarvester in 2015. The next year, the machine had been sold to operators in 16 states and Canada.

More than 100 of Bonzo’s portable harvesters were expected to be in use this season.

The Grants were able to purchase their HopsHarvester after being awarded a low-interest loan through the state’s Growing the Agriculture Industry, or GAIN, program, which provides loans to agriculture-based businesses looking to expand. The loan was Dublin Corners’ prize in Livingston County Development’s “Brew in Livingston” business competition.

The Hopster 5P used by Dublin Corners is a PTO-powered implement that runs off a tractor. The harvester is also available in a 5G self-powered model and a 5E electric model.

Grant said the HopsHarvester would be a “huge labor saver.”

Dublin Corners expects to harvest about 800 pounds of hops.

“We’ll get through the harvest a lot quicker,” he said. “With the brewery open there’s not a lot of time to sit and pick for weeks at a time.”

The length of the process “really prohibited us from growing our hop garden because it took so much time to harvest,” Grant said.

The Harvester will change that. “I don’t have to line up a bunch of people to hand pick and we can pretty much harvest any time we want,” Grant said. “It’ll make our schedule a whole lot better.”