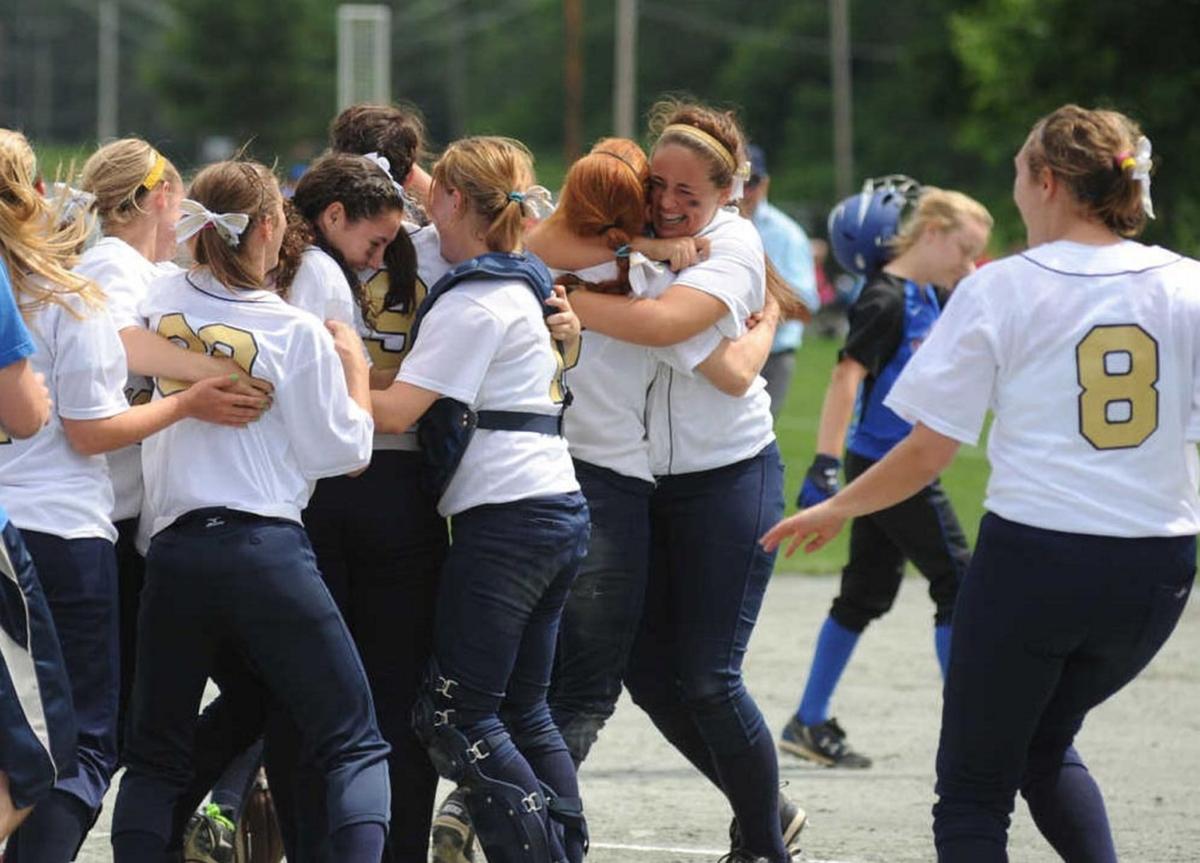 Mark Gutman/Daily News The Notre Dame softball team celebrates its Class D New York State title in 2012. The Fighting Irish are the only local team in the last decade to win a state crown. 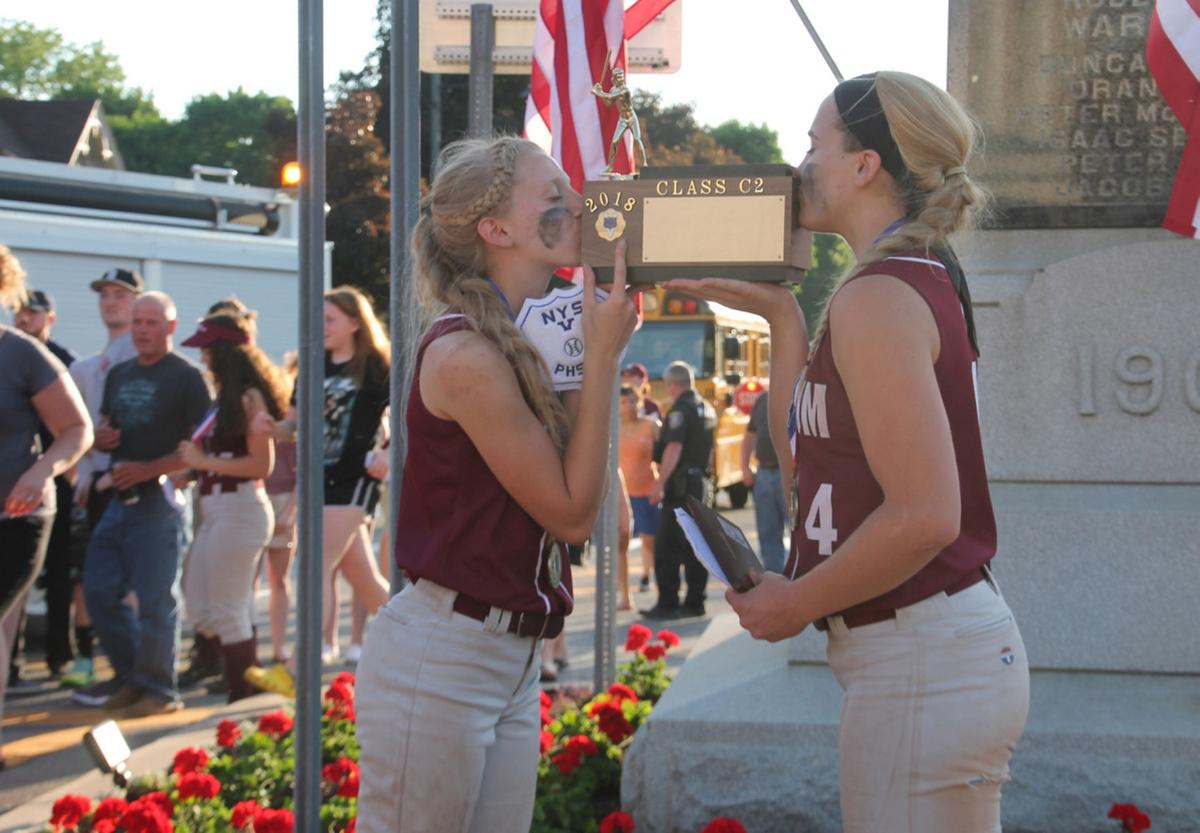 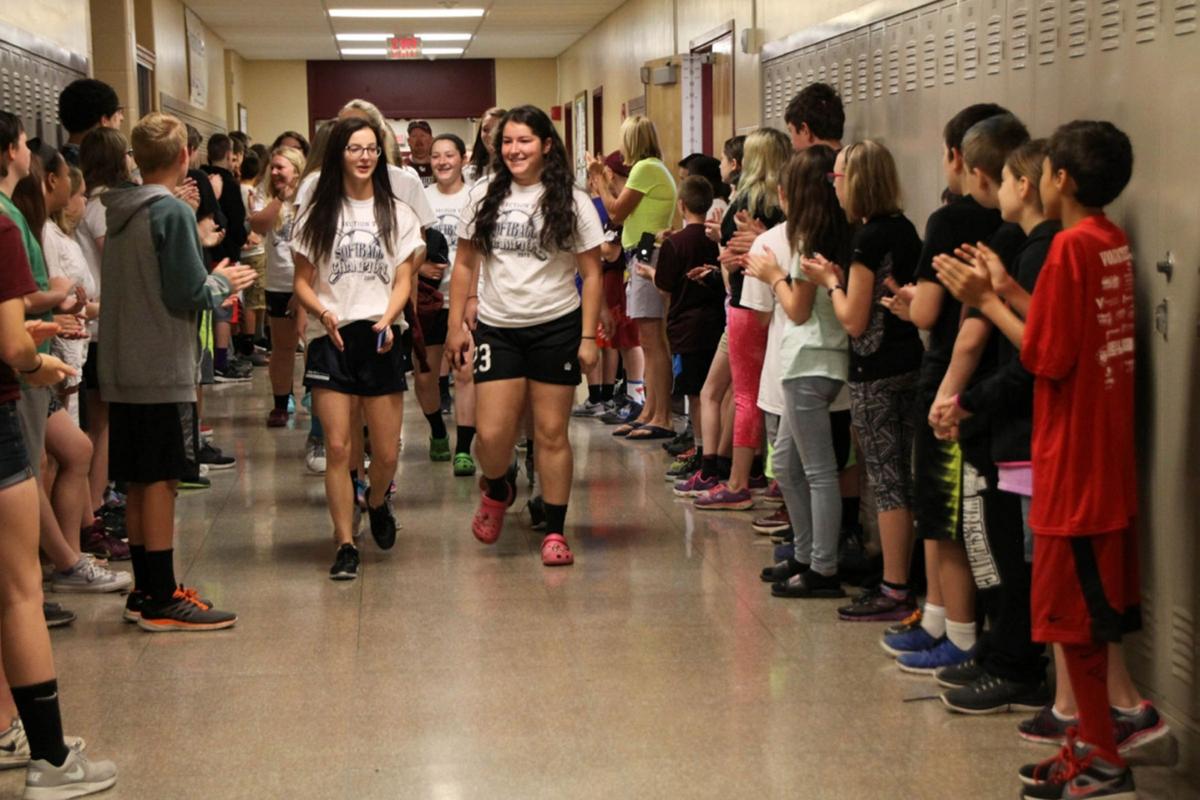 File Photo Cal-Mum’s Emily MacDonald (left) and Meghan Mietlicki get the celebration walk down the hallway prior to boarding the buss for the NYS tourney. 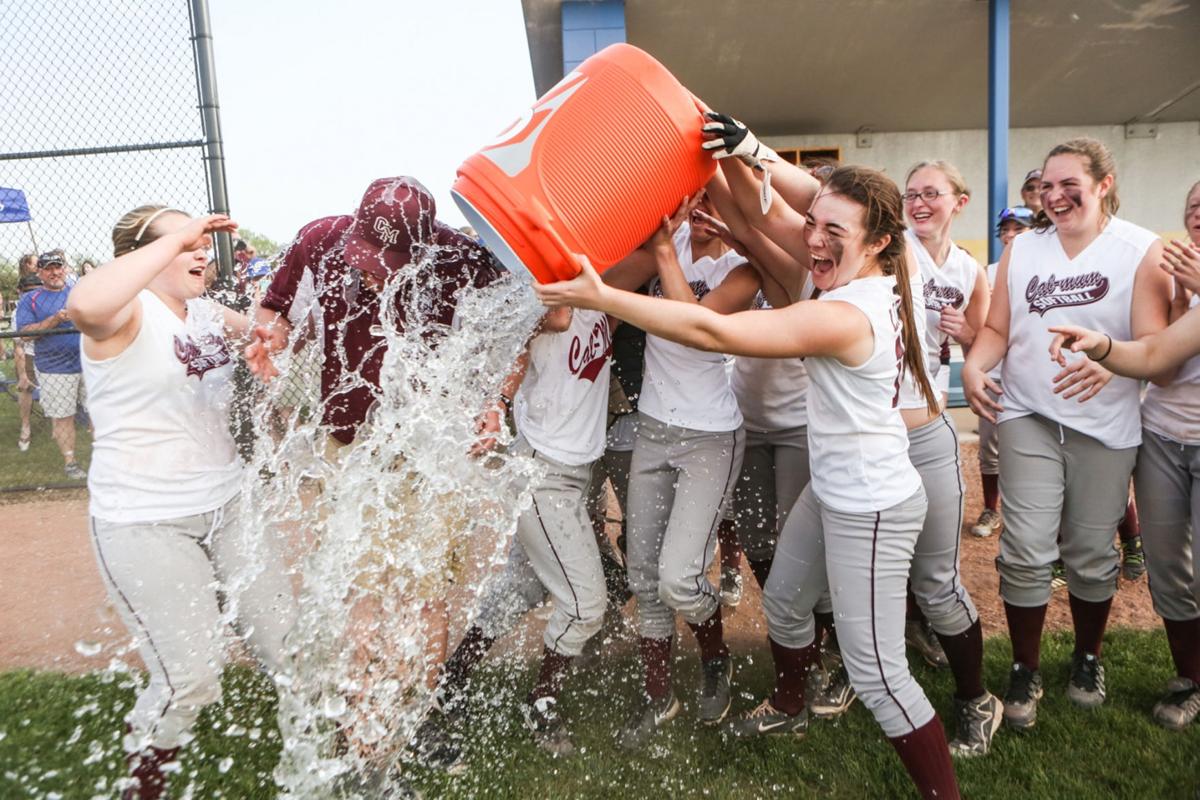 File PhotoCaledonia-Mumford coach Dan Dickens (middle/left) gets a bucket of water by the players after defeating Oakfield-Alabama 9-1 to win the sectional title. 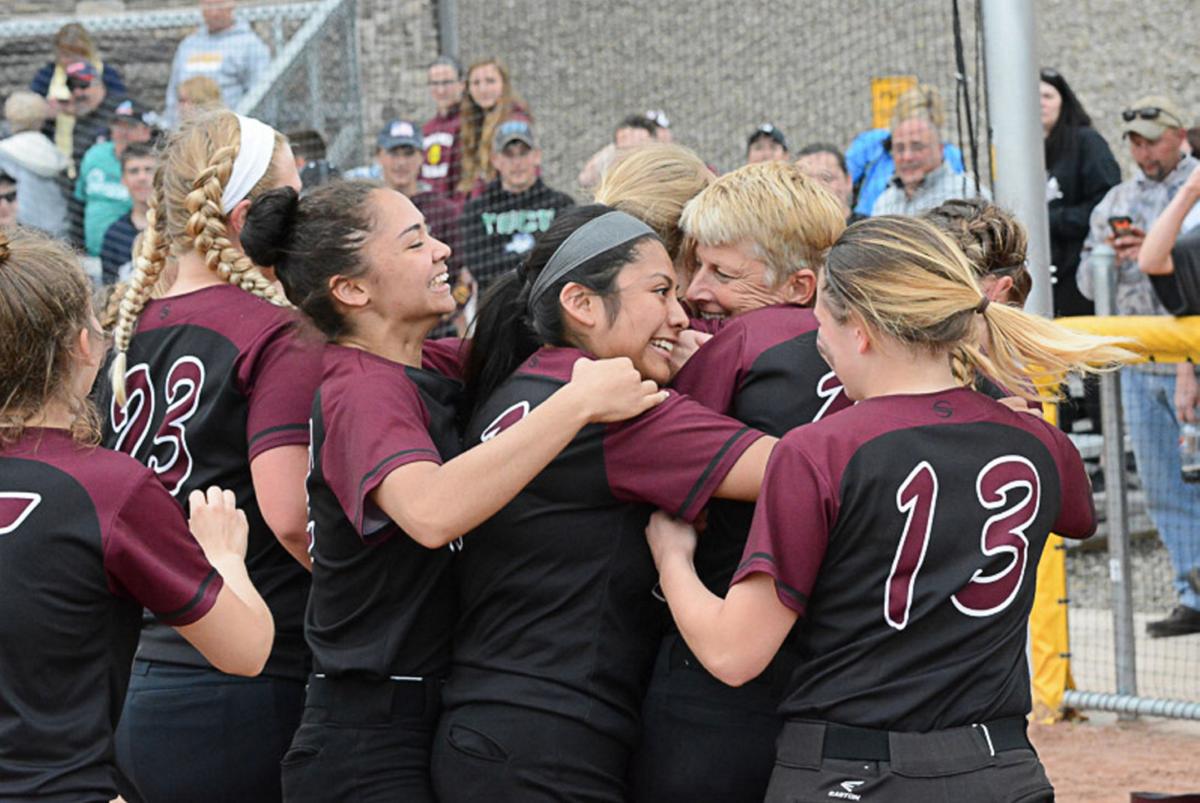 File PhotoElba celebrates their sectional title in 2017, a season where the Lady Lancers finished 20-3 despite losing their head coach mid-season. 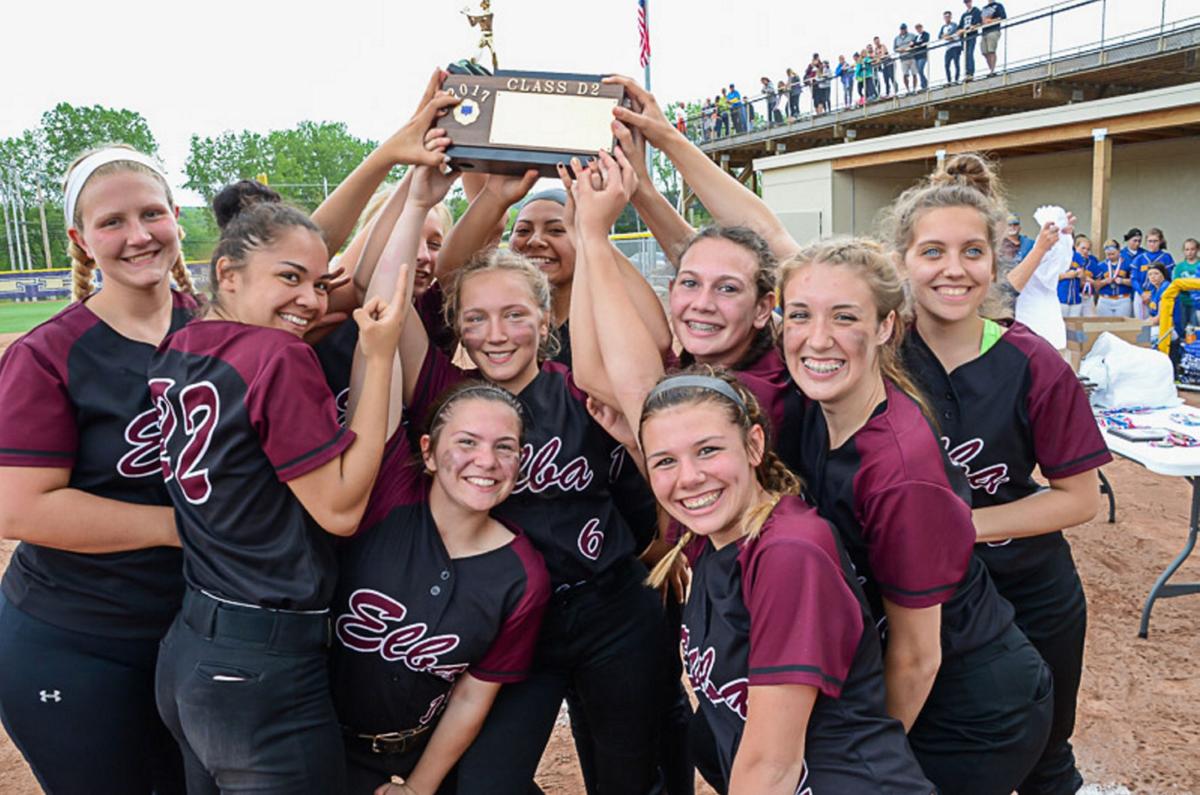 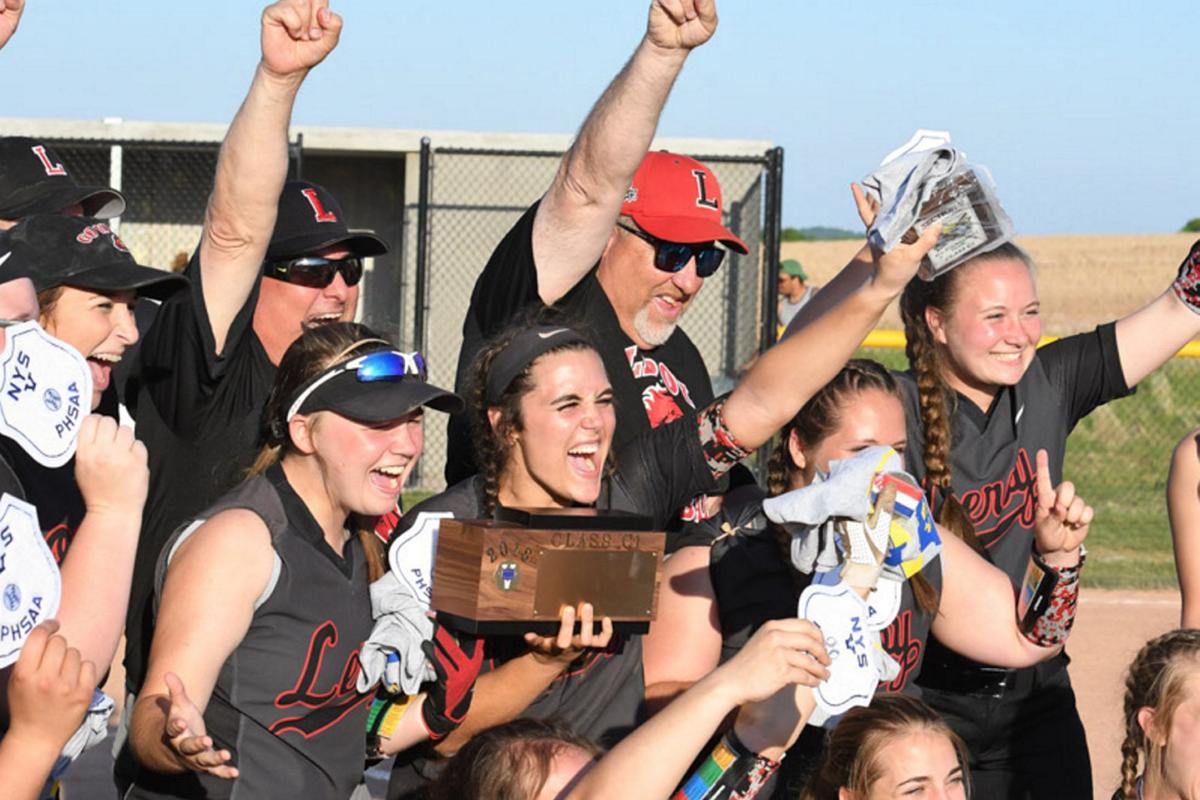 Daily News file photo The Le Roy softball team has won a pair of sectional titles over the past decade and was primed to make another run this season. 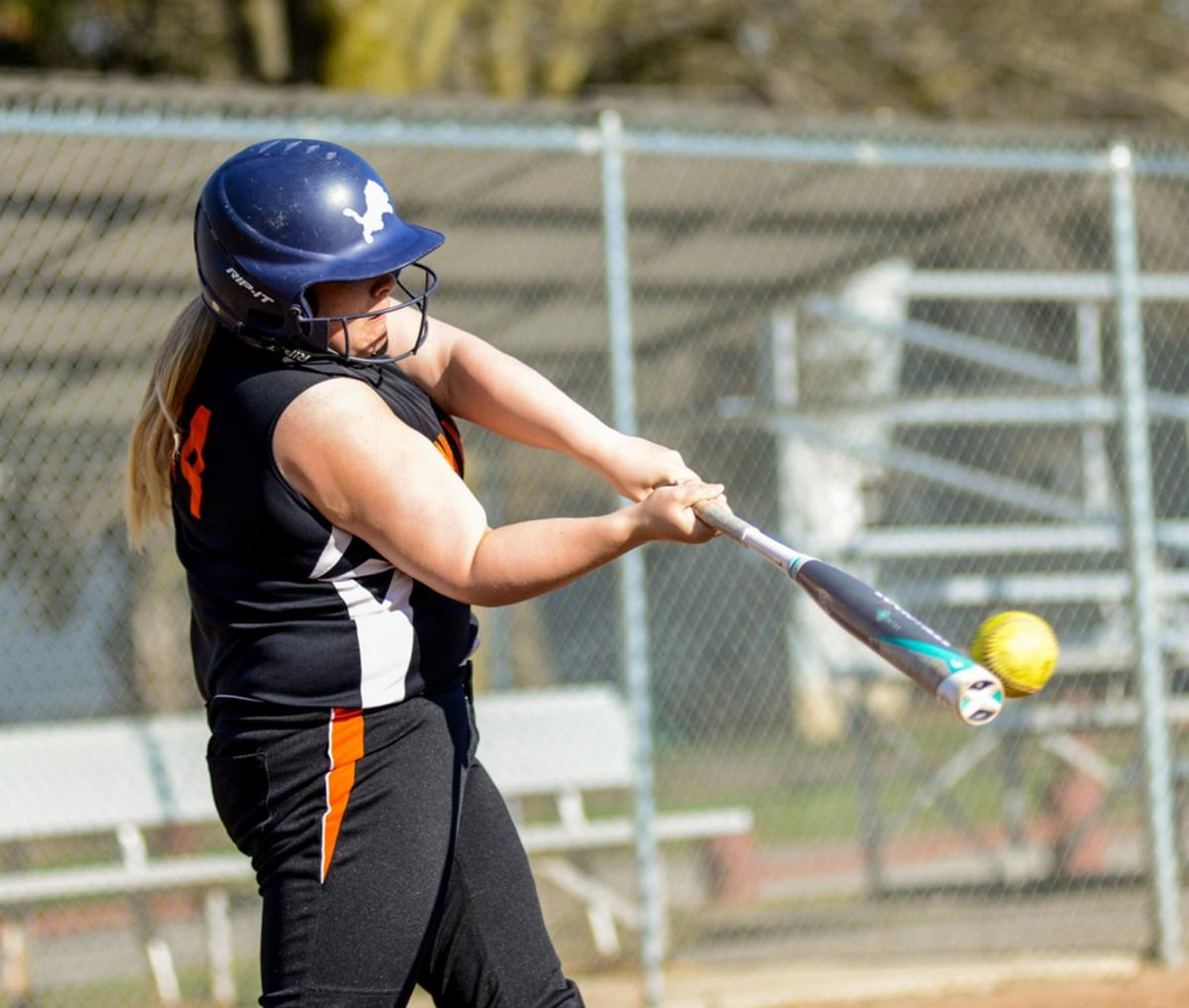 File PhotoWarsaw’s Katie Kersch smacking one out of the park last season for the Lady Tigers. 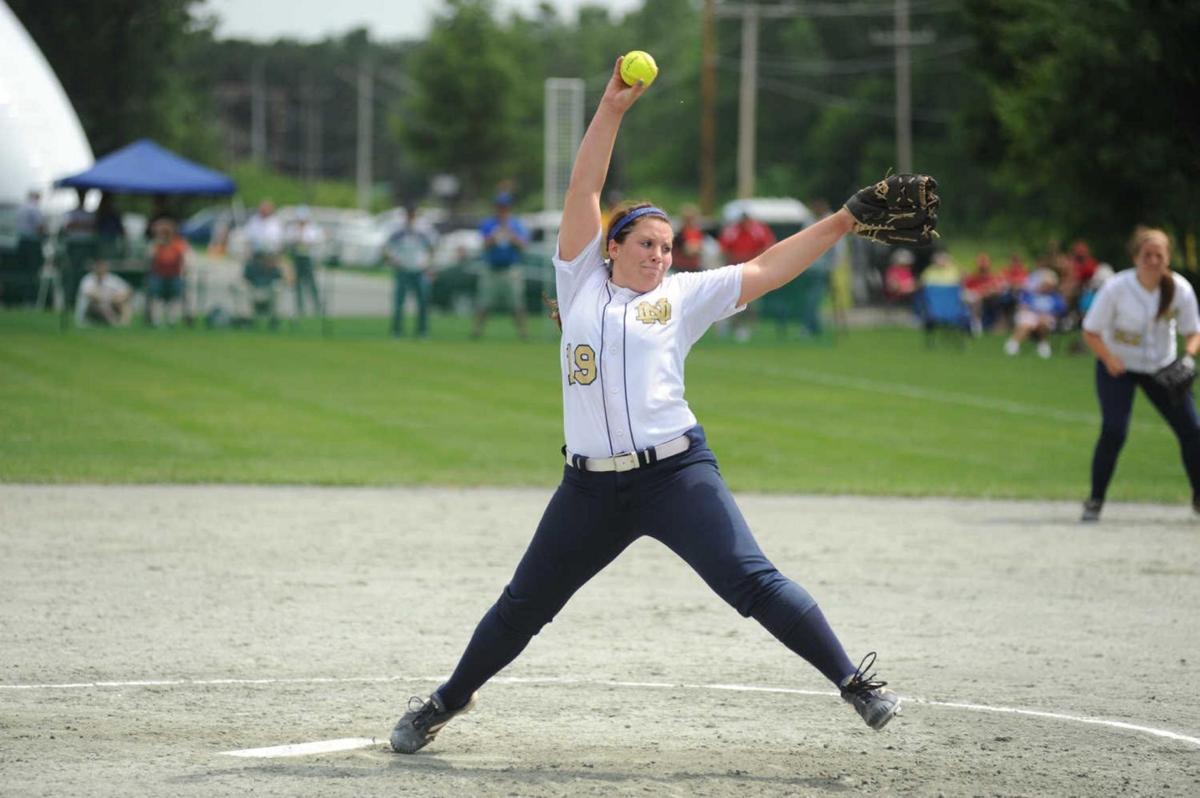 Mark Gutman/Daily News The Notre Dame softball team celebrates its Class D New York State title in 2012. The Fighting Irish are the only local team in the last decade to win a state crown.

File Photo Cal-Mum’s Emily MacDonald (left) and Meghan Mietlicki get the celebration walk down the hallway prior to boarding the buss for the NYS tourney.

File PhotoCaledonia-Mumford coach Dan Dickens (middle/left) gets a bucket of water by the players after defeating Oakfield-Alabama 9-1 to win the sectional title.

File PhotoElba celebrates their sectional title in 2017, a season where the Lady Lancers finished 20-3 despite losing their head coach mid-season.

Daily News file photo The Le Roy softball team has won a pair of sectional titles over the past decade and was primed to make another run this season.

File PhotoWarsaw’s Katie Kersch smacking one out of the park last season for the Lady Tigers.

It was an impressive decade of softball for the Cal-Mum Lady Raiders and head coach Dan Dickens finishing with 180 victories against just 47 losses (.800 winning percentage) along with five sectional titles and one trip to the NYS title game where they fell 8-6 in the 2016 Class C finals against Elmira Notre Dame (Sec. IV).

Meanwhile, another Notre Dame (Batavia) program captured the area’s only NYS title when Rick Mancuso and the Lady Irish took home the 1-0 victory over Deposit in the Class D state finals back in 2012.

Notre Dame had easily defeated Hamilton 9-2 in their semifinal victory.

While Notre Dame’s memorable title was the lone state championship earned by the GLOW region from 2011-2019, there was no abundance of sectional blocks taken home by area programs including an area-best five Section V blocks claimed by head coach Dan Dickens and the Lady Raiders.

Impressively, Cal-Mum had just one losing season this past decade, last year, where they went 7-13.

Of the 10 years, Cal-Mum put together four 20-win or better seasons and had 16 wins or more all but last year.

In all, Cal-Mum captured eight LCAA titles the past decade.

Between LCAA foes Cal-Mum (5), Keshequa (4), Wayland-Cohocton (3), and Le Roy (2), 14 sectional blocks were brought home by those three programs this decade.

Way-Co, coached by Dave Stewart has been a true force in the area since his arrival in the 90’s while guiding Way-Co to eight LCAA crowns and three sectional titles this decade alone.

Cal-Mum and Keshequa played in one of the greatest post-season match-ups in this era back in 2012 when both teams captured a ‘C’ title and played for a berth in the Far West Regionals.

In that 2012 classic, Keshequa lost an epic 1-0 state qualifier game to Cal-Mum in 10 innings in one of the greatest pitching performances by two players where C-M pitcher Jordan Sarat outdueled Alex Flint in a game that featured just five hits and 33 K’s, including a Section V-record 23 by Flint.

The game ended in the bottom of the 10th when senior Katelyn Cappotelli ripped a line-drive single up the middle scoring Maddie Flint in a game played at Canandaigua. Sarat tossed 10 innings of two-hit softball.

Notre Dame’s state title run was extremely impressive as it came the year after making it all the way to state title game before losing to Livingston Manor 8-0 in the finals.

One of the most impressive stats this past decade came from head coach Dave Stewart and the Wayland-Cohocton softball program that finished a spectacular decade campaign in the Livingston Conference going 125-10 against a conference that features several of the area’s top programs.

So without further ado,here are our selections for The Daily News All-Decade Softball Programs from 2011-2019.

With eight LCAA divisional titles, five Section V championships and one trip to the NYS finals (2016), the Lady Raiders and head coach Dan Dickens have stayed as consistent as any top tier program has done.

Just one losing season, last year, and a decade worth of 20-plus win seasons, four of those, and Cal-Mum finished with an overall record of 180-47.

Make no mistake about it, Coach Dickens would be the first to say that he’s been very fortunate to have the talent that he’s had the past decade including standouts Hannah Anderson, Meghan Mietlicki, Grace Walker, Andrea Coyle, Kelsey McMullen, Jordan Sarat, Courtney Flagler, Mackenzie Wilson, Emily MacDonald, Gillian Flint and Hannah Rubinrott.

Incredibly, Way-Co finished with 125 victories against just 10 losses (.926) against the Livingston Conference including three perfect seasons within the conference.

Another impressive nugget is the fact that during these last 10 seasons, Way-Co softball has never won fewer than 16 games.

Many of those players went on to compete at the college level.

Back in the early part of the decade, there was no better softball played than what took place on Walnut St. in Nunda.

Martha Blair and her Keshequa girls were as dominant as they could be from 2011 to 2013 when they won three straight sectional titles going an impressive 60-6 during that period with top players Alex Flint, Rachel Axtell, Haley Russell, Kristen Jackson, Gabe Mehlenbacher, Tessa Gordinier and Ashley Parthemer leading the way.

After a few average seasons in 2015 through 2017, Keshequa has captured 27 victories the past two years including back-to-back LCAA titles and last year’s 15-8 record and Section V crown winning the C3 block under Coach Mann.

“We were very blessed to have some exceptional athletes as well as exceptional young ladies come through our program,” coach Blair said.

“I am honored and humbled to follow in the footsteps of a giant,” coach Mann said. “Coach Blair created a program that focused on education, dedication, sportsmanship, and excellence, on and off the field. The success of our program is a direct result of Coach Blair and her passion for education, the athletes, and her community. She was a true professional.”

While the majority of the success for Notre Dame came at the beginning of the decade, the Fighting Irish are the only local team to come away with a New York State title in the last 10 years.

Coached by Rick Mancuso and led by Carly Pike, Meg Taylor, Laurie Call, Maddie Mancuso, Kendra Wall and a host of others, the Fighting Irish captured the NYS Class D crown in 2012, just a year after they fell in the state title game in Livingston Manor.

Because of the marry-go-round of coaches since Mancuso retired, including Michelle Panepento, Tim Frappa and now Otis Thomas, Notre Dame’s overall success in terms of sectional titles dropped off the last half of the decade, but that doesn’t mean the Irish still weren’t relevant.

This year the Irish were also bringing back a solid team that likely would have made another run at a crown this season.

Le Roy softball started out slow this decade but have caught fire under coach Mike Battaglia, who took over in 2013 and has guided the Lady Knights to sectional titles in 2016 and 2018, and many thought this spring they had an excellent chance at number three.

Batavia’s overall record over the last decade may not be up to par with some of the other teams on this list, but two things must be considered when sliding the Blue Devils into this spot:

1. Batavia plays in an ultra-tough Monroe County, which in turn makes its regular season marks not as spectacular as some of the other teams that have the ability to take advantage of some bottom-feeders.

2. The Blue Devils are also almost always in Class A, where they have — multiple times — run into a powerful Pittsford Sutherland team in the sectional finals; plus, Batavia has done everything they have done without a prototypical ‘dominant’ pitcher.

Since 2010 Batavia has gone a solid 101-81 with its lone sectional title coming in 2013 under former head coach Burton Howell. Throughout the decade, however, the Blue Devils have also advanced to four other sectional finals and a pair of other sectional semifinals.

The Blue Devils have advanced to at least the sectional semifinals seven times in the last 10 years, including each of the last five seasons.

Much of the Hornets’ success came at the beginning of the decade before a carousel of coaches came in, as Mike Anderson has settled into the coaching spot since 2017.

The 2012 team was 20-0 before a shocking sectional playoff loss and since then there has been only one sectional finals appearance — 2016 when O-A fell to one of the dominant Cal-Mum teams.

The 2017 team also won a GR title, while Anderson’s second year in 2018 saw the Hornets finish a solid 14-5 before they struggled with a young team last spring.

A tough start to the decade would end up being a strong finish as the 2019 Lady Tigers not only captured the Section V title but made it all the way to the NYS Class title game before finishing their magical season 20-1 under head coach Amber Stackhouse, who also guided the Lady Tigers to the sectional title in 2015.

The 2015 season was highlighted when Warsaw defeated Cal-Mum 6-1 to capture the sectional title. They would fall 5-4 to Addison in the ‘C’ state qualifier.

In 2018, Warsaw lost to Campbell-Savona in the sectional semis.

From 2011 to 2013, under then head coach Rob Kersch, Warsaw finished a respectable 30-32 overall competing in a highly competitive LCAA.

Finished 19-5 in 2015 beating LCAA rival Way-Co 10-5 in the sectional finals before losing to Alden 5-4 in the NYS quarterfinals.

Those two years Bath-Haverlng finished 38-10 with two sectional titles under Long who stepped away following the 2017 season.

The other eight seasons were not nearly as competitive which included a 5-13 record last spring.

Unlike a few other teams on this list, Alexander’s success in the decade has come later since head coach Dan Prong took over in 2015.

Since that year the Trojans — though they have had disappointing ends in the sectional tournament — are a solid 60-34, with a pair of Genesee Region League Division I titles.

Elba had an impressive season amid turmoil in 2017 when it won the Class D title and advanced to the Far West Regional final before falling to North Collins.

The Lancers were 20-3 in that spring despite their head coach being dismissed midway through the year. However, the years surrounding the title have been below average.