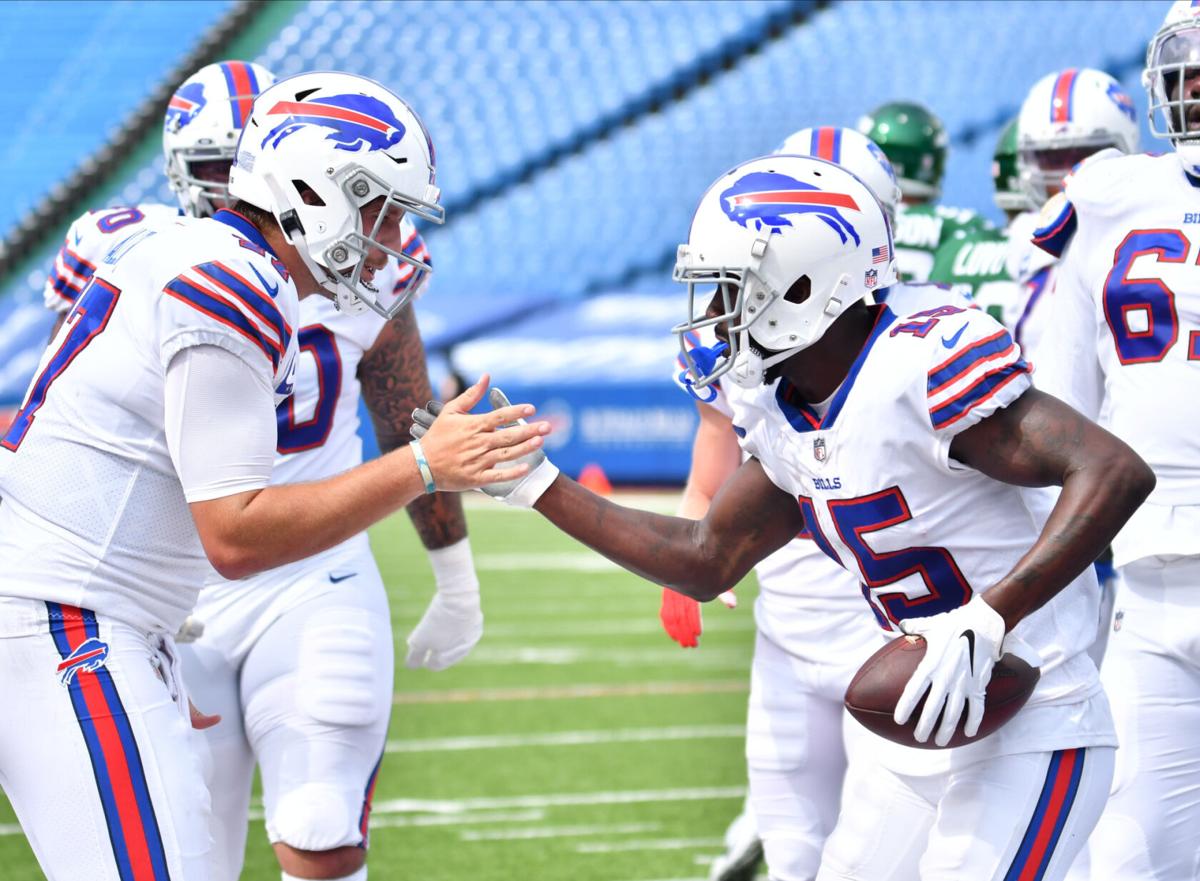 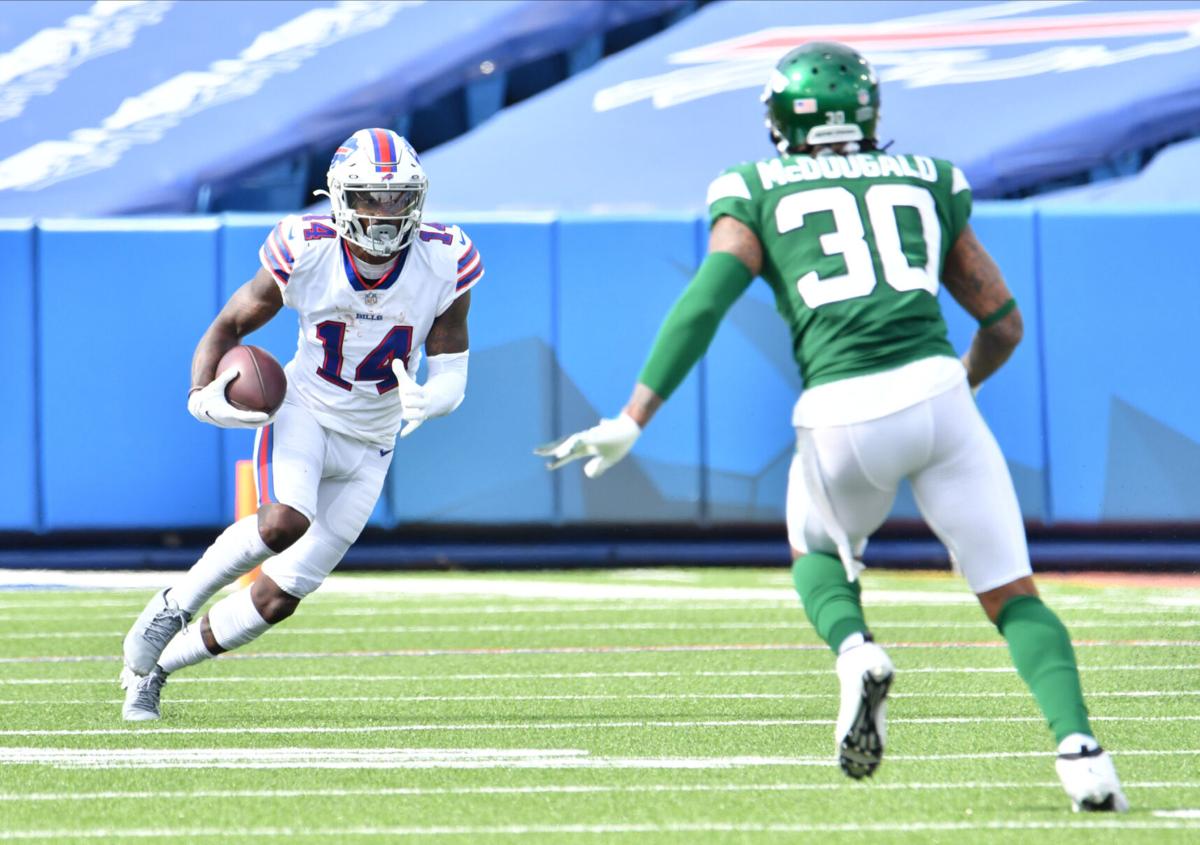 ORCHARD PARK — There were certainly a few things to shake your head about following the Bills’ win over the New York Jets, two Josh Allen fumbles and two missed field goals by rookie kicker Tyler Bass among them.

On the other side of the coin, one major positive to take away from Sunday was that the connection between Josh Allen and his top-two targets, wide receivers Stefon Diggs and John Brown, appeared to be in mid-season form.

Combining for 156 receiving yards in the win, Diggs and Brown got open early and often and connected with Allen 14 times on 19 targets. The big day from each of Buffalo’s top-two targets helped Allen record a historic performance, as he finished the game with a career-high 312 passing yards, making him the Bills’ first 300+ yard passer since former Bills quarterback Tyrod Taylor threw for 329 yards in an overtime loss to the Miami Dolphins on December 24, 2016. In that game, it took Taylor less than 40 attempts to reach the 300-yard mark, while it took Allen 46 attempts to do so on Sunday.

Allen appeared in complete command of the offense throughout the win over the Jets, as the Bills used a spread-out attack to wreak havoc on the Jets’ defense throughout the day. Allen was able to spread the ball all over the field and hit eight different receivers, as Diggs, Brown, WR Cole Beasley, WR Isaiah McKenzie, WR Gabriel Davis, TE Dawson Knox, RB Devin Singletary, and RB Zack Moss all caught at least two passes.

The most exciting facet of the Bills’ passing game on Sunday was the consistent use of the screen game, which included a screen pass to Brown which he caught off of his shoetops and took 17 yards for a score during the second quarter. Another creative screen pass from offensive coordinator Brian Daboll involved Knox, who snagged a tight end screen and barrelled forward for 11 yards and a first down during the Bills’ first scoring drive of the afternoon.

Bills offensive coordinator Daboll seemed to make things relatively easy for Allen against the Jets, calling several four-wide and five-wide formations and using a boatload of creativity in the passing game to keep New York’s defense off track. Daboll received mixed reviews from Bills’ fans on Twitter, but if you ask his players they were more than pleased with the playcalling from their OC on Sunday.

“He is a mastermind,” said Diggs during his postgame press conference. “He knows his stuff. So as far as getting me involved, I am more than thankful, but more so from the standpoint of he got everybody involved.

“A lot of people touched the ball today and you anticipate it being that way,” added Diggs. “We have a lot of weapons offensively and we have a mobile quarterback.”

Along with Daboll, Diggs was also impressed by the performance of his quarterback on Sunday.

Diggs says he thrives off the energy that Allen exudes.

“I’m always in his ear trying to keep that positive energy going,” he said about the Bills’ QB. “When I see him out there it gives me a little push in the back and makes you say you want to play for this guy, you wanna go hard for this guy - because he is damn sure going to go hard for you.”

While the addition of Diggs has already proven its worth in terms of the immediate impact that he has made on Allen, Diggs’ influence on his fellow wide receivers has also paid immediate dividends, case in point John Brown’s performance against the Jets.

Unlike last season when Brown was forced to deal with, at times double teams and other times one-on-one coverage from the opposing team’s top defensive back, this season Diggs will be the one placed into many of those scenarios which leave plenty of room for Brown to flourish. Brown was running free on Sunday and helped the Bills offense record a big afternoon through the air.

“With Stef Diggs here, Gabe Davis, Cole Beasley, a lot of things were opening up for us,” said Brown about what led to his big performance against the Jets.

“That’s what I envisioned,” added Brown.

Both Diggs and Brown finished last season with over 1,000 receiving yards, and if Sunday was any indication another big season could be in store for both of them. While it will take a huge year from Allen to produce two 1,000-yard receivers, these two are talented enough to do so.

“They know how to get open and they are just fun to play with,” said Allen about his top-two wide receivers, who he says are amongst the most intelligent players in the game. “They communicate, they talk and the things that they can do, not a lot of guys in this league can do what they can do. (They are) constantly getting open, making plays.”

With such a high opinion of both Diggs and Brown, it’s been hard for the Bills to differentiate between the two in terms of where they fall on the depth chart.

“I wouldn’t say we have a (No. 1 receiver and No. 2 receiver),” added Allen, echoing comments made by head coach Sean McDermott during his own postgame press conference moments earlier. “We have two ones.”

The love affair between Diggs, Brown, and Allen is alive and well in Buffalo and with an explosive Week 1 performance in the books, this terrific trio is on its way to reaching great heights. While there are certainly plenty of mouths to feed in what is suddenly a high-powered offense, Allen, Diggs, and Brown will fuel the Bills’ attack this season.