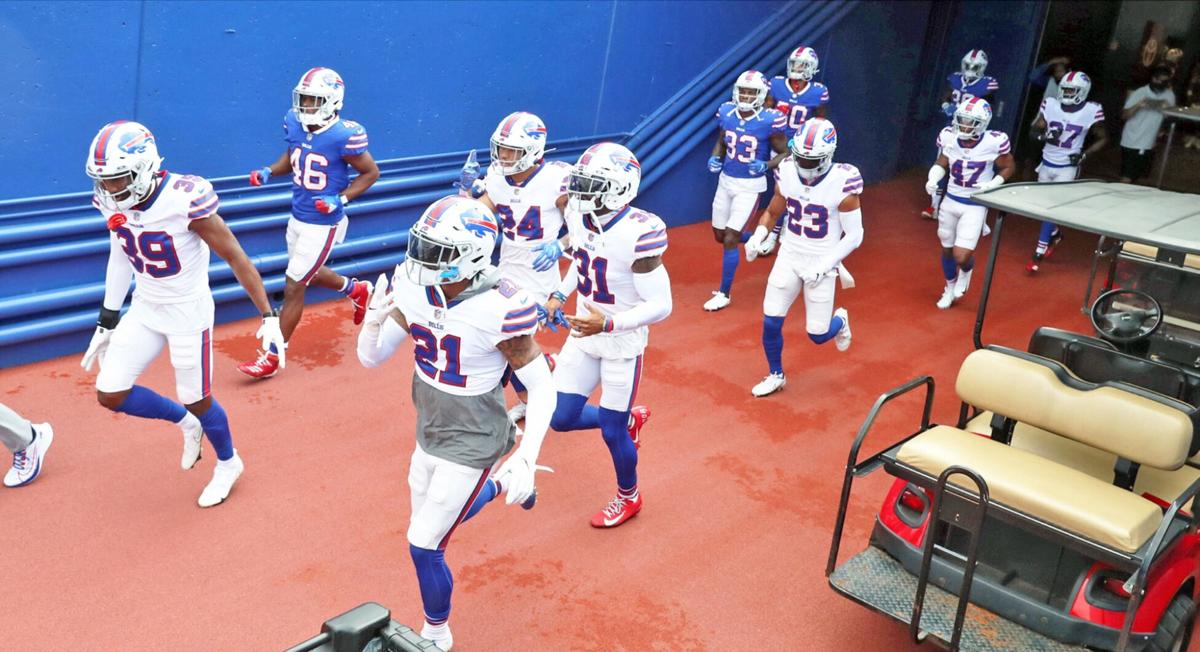 Buffalo Bills safety Jordan Poyer (21) takes the field with his teammates from the tunnel entrance of the stadium during the ninth day of training camp at Bills Stadium in Orchard Park,N.Y. on Thursday, Aug. 27, 2020. Pool Photographer (James P. McCoy/Buffalo News)

Buffalo Bills wide receiver Stefon Diggs (14) did not dress today. He played catch on the sidelines in pre game warmups during the ninth day of training camp to an empty stadium and no fans at Bills Stadium in Orchard Park,N.Y. on Thursday, Aug. 27, 2020. Pool Photographer (James P. McCoy/Buffalo News)

Buffalo Bills safety Jordan Poyer (21) takes the field with his teammates from the tunnel entrance of the stadium during the ninth day of training camp at Bills Stadium in Orchard Park,N.Y. on Thursday, Aug. 27, 2020. Pool Photographer (James P. McCoy/Buffalo News)

Buffalo Bills wide receiver Stefon Diggs (14) did not dress today. He played catch on the sidelines in pre game warmups during the ninth day of training camp to an empty stadium and no fans at Bills Stadium in Orchard Park,N.Y. on Thursday, Aug. 27, 2020. Pool Photographer (James P. McCoy/Buffalo News)

ORCHARD PARK — The Bills’ lone intrasquad scrimmage of the preseason took place on Thursday morning, as the team did its best to replicate a typical game day for its players. According to Democrat and Chronicle Bills’ reporter Sal Maiorana, the Bills’ simulation was down to the finest detail, with the scoreboard lit up, live public address announcements after each play, fake crowd noise piped in and, as Maiorana described, that ‘annoying’ train whistle that the Bills utilize while their defense is on the field for third down.

Over the years there is no fan base in the NFL that has developed a better reputation for their passion than ‘Bills Mafia,’ and for Bills’ players, not having the fans with them this morning as they prepared for their live scrimmage was a stark change.

“It was a little different coming out here in our stadium with it not being filled (with fans),” said Bills’ veteran defensive end Jerry Hughes during a video conference following Thursday’s scrimmage. “But I think coach did a great job of trying to simulate the crowd noise so that way it would force us to communicate effectively.”

With that said, there is no simulating ‘Bills Mafia,’ said Hughes.

“Like I was telling some of the new guys, the free agent or young guys that we have nothing compares to when you have ‘Bills Mafia’ in that stadium on Sunday and it’s third down and I can’t hear the person to my left who is two inches from my ear talking,” added the Bills’ defensive end. “There is really no comparison to that, but we did a good job of trying to simulate it in a sense.”

The lack of fans is just one of the many changes that will be made to a typical NFL game day this season, and it was the goal of the Bills on Thursday to prepare themselves as best they can to make adjustments that will be necessary for them to succeed come September 13 against the Jets.

“It’s our goal today to get the guys in as much of a routine as we can,” said Bills’ head coach Sean McDermott prior to the start of the morning scrimmage. “That’s important that they as a competitor can have a feel for what it’s like and what our pregame routine is like as well as our halftime routine, and get as comfortable as they can heading into Week 1.”

One player who, by all accounts seemed as comfortable as ever on Thursday, was Bills’ quarterback Josh Allen, who according to WKBW Sports Director Matt Bové was an efficient 34-for-45 passing for 304 passing yards and three touchdowns. Allen also threw an interception that went off the hands of rookie receiver Gabriel Davis. Allen’s touchdowns, according to WROC Sports Director Thad Brown, were caught by Andre Roberts, who finished with three receptions for nearly 40 yards, and Devin Singletary, who caught a number of screen-passes for nearly 40 yards as well. Elsewhere, Bills’ veteran receiver John Brown had a nice day with eight catches and nearly 90 yards, according to WROC’s Brown, and receiver Cole Beasley finished with six catches and over 40 yards receiving.

One glaring omission from Thursday’s scrimmage was the Bills’ new number one receiver Stefon Diggs, who did not participate as he was dealing with a sore back.

On the ground, Bills’ rookie running back Zack Moss showed well, recording a touchdown and what WROC’s Brown described as the play of the day for the Bills’ offense - an 11-yard Moss run which finished with a trucking of Bills’ defensive back Dean Marlowe.

“It felt great getting out here in the stadium, being able to simulate a game as much as possible, getting those reps, getting our communication down, getting a feel for how it’s going to feel in the stadium without fans and things of that nature,” said Hughes. “I think today was a great job of us using our tools and everything that we have been working on, dating all the way back to the spring with those Zoom calls, to our meetings, and our practice throughout camp.”

Also per Capaccio, the Bills first-team defense was on point all day long, with the defensive line making it particularly difficult for Barkley to enjoy any success throwing the football.

“I think today was a great stepping stone in us moving forward to us becoming that cold front, becoming that top defensive unit especially defensive line unit that we want to be this year,” added Hughes.

In the offseason, Buffalo added several new faces to the defensive line group that was already considered to be a strength for the Bills, including rookie defensive end A.J. Epenesa, as well as veterans Quinton Jefferson and Mario Addison. In Hughes’ mind, the competitive atmosphere that has been created in the Bills’ D-line showed on Thursday.

With both sides of the ball experiencing some ups and downs on Thursday, Singletary said that the Bills accomplished their main goal for the scrimmage.

“I feel real prepared,” said the Bills’ second-year running back. “I feel we had a great schedule this training camp, trying to help with not having preseason games. I feel great, I feel in shape, you just got to keep taking it day by day like I’ve been saying and be ready for game one.”

For the Bills, Week 1 against the Jets is less than three weeks away, and now that their lone scrimmage of the preseason has come and gone, the next 15 or so days will be all about fine-tuning, and getting everybody healthy and ready to make a push toward another playoff-caliber season in Buffalo.