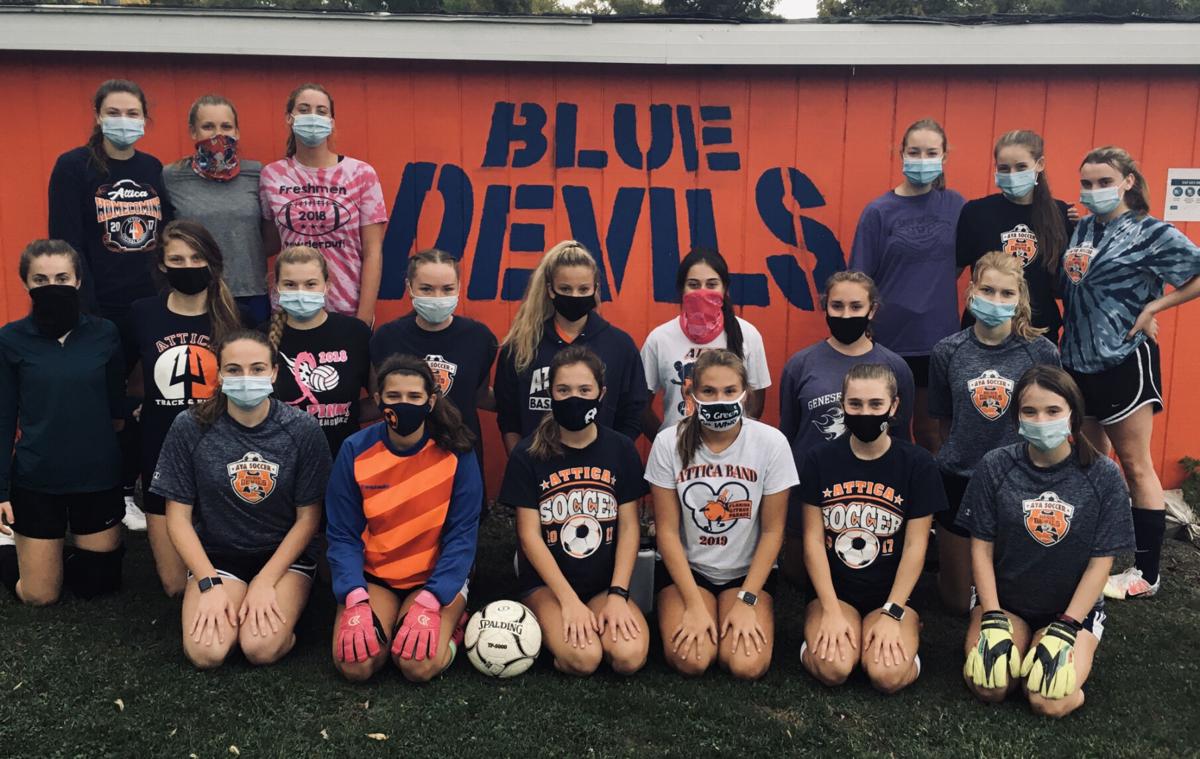 ProvidedThe Attica girls soccer program is excited about finally getting the 2020 fall sports season underway. The girls will be welcoming back 4 returning players this season. 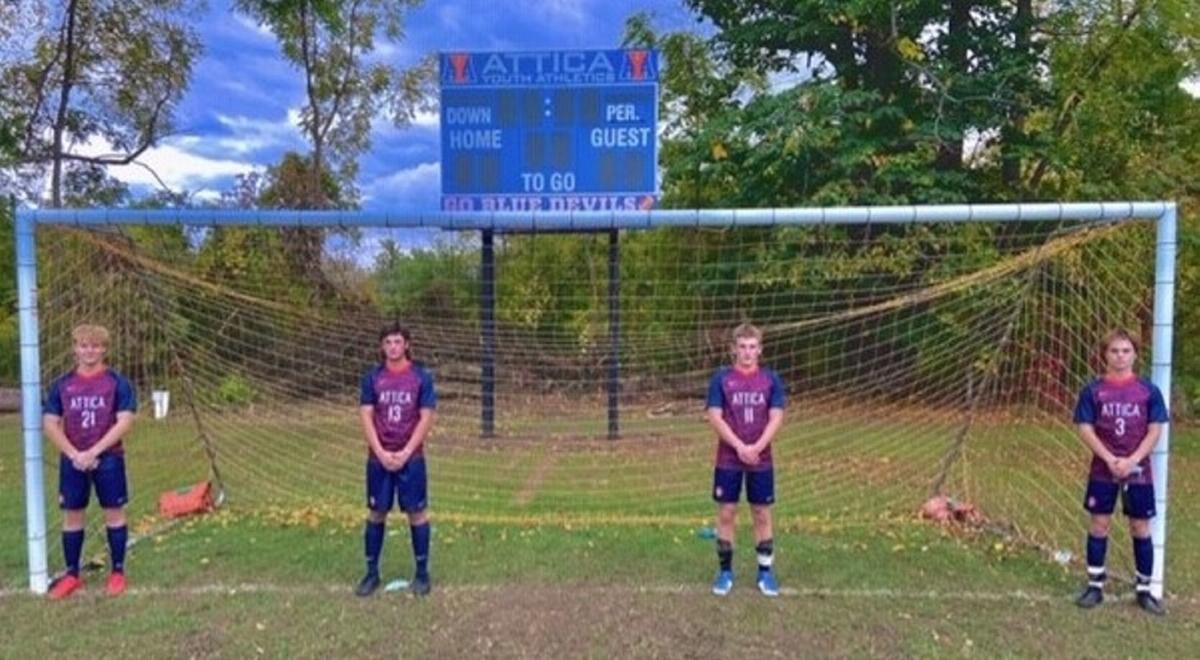 Provided Attica captains (right to left) Zachary Conrad, Dan Kibler, Travis Kauffman and Evan Dickhut are all expected to contribute at a high level this fall. 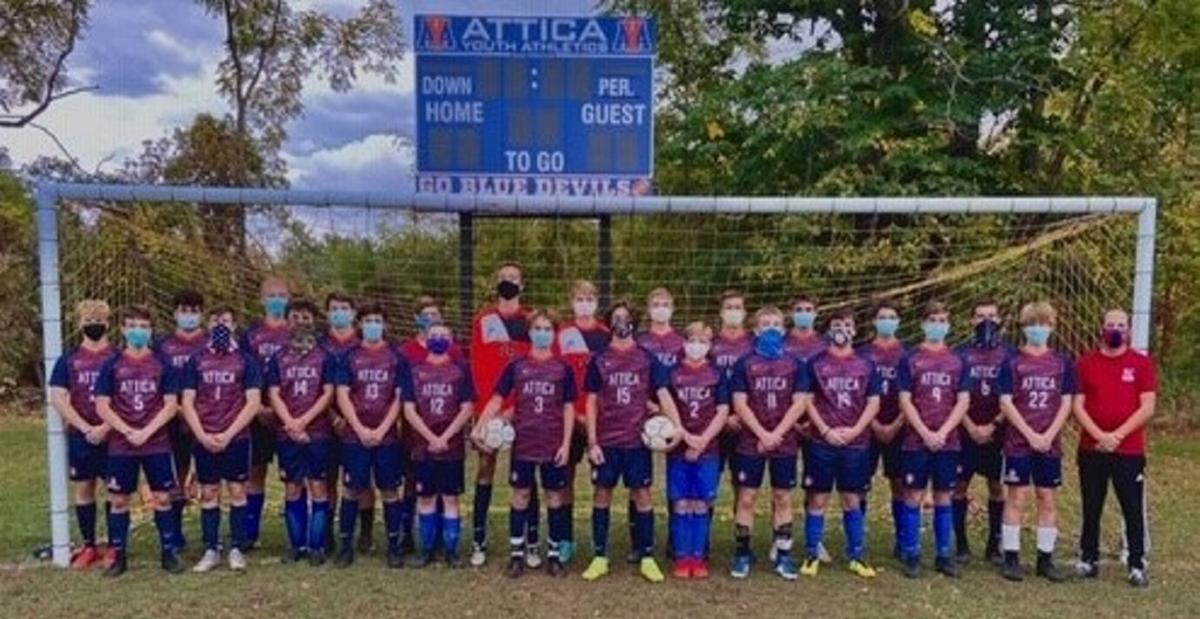 Provided Look for the Attica boys soccer program to pull off a few shockers this season.

ProvidedThe Attica girls soccer program is excited about finally getting the 2020 fall sports season underway. The girls will be welcoming back 4 returning players this season.

Provided Attica captains (right to left) Zachary Conrad, Dan Kibler, Travis Kauffman and Evan Dickhut are all expected to contribute at a high level this fall.

Provided Look for the Attica boys soccer program to pull off a few shockers this season.

ATTICA — Despite a rough go at it over the past few seasons, there are plenty of reasons to feel some optimism coming the way of the Attica girls soccer team this fall.

In 2017, the Blue Devils scuffled to a winless season but have followed that up with a pair of three-win campaigns, including last season when four of those setbacks came by just a single goal.

Now Attica has a new head coach and new aspirations for the program.

Entering her ninth overall season with the girls soccer program, Heather Smith takes over for her first year as head coach after the Blue Devils went 3-14 in 2019.

And this season a bulk of last year’s group will be returning with the hopes of creating a building block for the program to grow.

“This year’s team is committed to having a great season — there are 14 returning players that show leadership and are ready to get started next week, as well as six new comers from seniors to freshmen,” Smith said.

A trio of seniors will be looking to lead the way this season in McKenna Jarnot, Gretchen Ziegler and Lily Koch. Jarnot, a midfielder/forward, is the team’s leading returning scorer after she finished with three goals and two assists as a junior.

Three juniors will also be back this season in midfielder/defender Emily Gersitz (1G, 2A), defender/midifielder Cassidy Strzelec (1A) and defender Grace Gominiak, as well as sophomore defender/midfielder Kaylie Bugajski (2G) and freshman midfielder MacKenzie McLeod.

There will also be a number of talented newcomers to the varsity squad this season in juniors Erin Cooper (D/M), Elizabeth Peters (D) and Olivia Rudolph (M), sophomore Mia Ficarella (M) and freshman Alanna Pellicane (GK).

“They have been working in their off season as individuals while playing on different travel teams throughout the summer,” Smith said. “This is a group of young ladies who love their sport and are passionate for what they do.”

Attica has gone 6-43 over the past three seasons.

It’s been somewhat of a rough go of late for longtime head coach John Dickhut and the Blue Devils. Last season Attica finished at just 2-13-3, yet that record really wasn’t as bad as it seems on the outset and this year things could find a way to be a lot different.

In a football town without football, the excitement around the soccer field for both the boys and girls has only increased, while the boys team has seen an influx of players that would normally be on the gridiron — four in fact.

However, it will be the returning players, some with years of experience and others who continue to improve, that will make the difference as this team tries to build itself into a contender.

Leading the way will be junior Evan Dickhut, a three-year starter and now a two-time captain for the Blue Devils. Last season he was named a GR All-Star, while he was named to the Class BB all-tournament team as a freshman.

“Evan has lead our team in assists the last two years and was second in goals last year,” Coach Dickhut said. “He plays center-midfield and forward for us, but his best position is actually at center-defense.”

Speaking of defense, that will be led captain Travis Kauffman and goalkeeper Nick Perl.

“One of the toughest players that you will find,” according to Coach Dickhut, Kauffman is a wrestler by nature and brings that grit and intensity to the soccer field. Kauffman will be joined by fellow returning starters Dan Kibler and Zachary Conrad on the defensive end.

Perl is just in his second year of playing soccer but made great strides in his goalkeeping ability last season. Getting better each game he plays, Perl had two shutouts last season, including one against Pavilion/York when he made a save on a penalty kick in the last few minutes of the game.

“We hope to improve on our record last year, but most of those losses were one goal games, so hopefully we turn them into wins this year,” Coach Dickhut said. “We do not have any non-league games so it will be a very tough schedule where we play all the GR teams twice, plus we play Pembroke, Holley, and Wheatland-Chili a third time.”

Attica lost only three players to graduation from last season and will also be bringing back a trio of exciting young players in sophomores Ryan Meides, Jonah Clark, and Simon Lamparelli.

Clark scored a game winner last year in a win against Pembroke and Lamparelli led the Blue Devils team in goals with seven. Junior Daniel Biniaszewski is also a returning starter from last year and is an extremely versatile player. Last year he started games at defender and midfield. Comments:

“It will be interesting to see how the influx of football players impacts our team,” Coach Dickhut said. “We have four guys that played football last year, including Zachary Strzelec who was a third-team all-state linebacker. The three other players — Drew Cusmano, Andrew Newell, and Konnor Schroeder — are athletic and hardworking.”

The Blue Devils girls capped their 2019 season with a solid eighth-place finish at a strong Class C Championship meet and they have plenty of reasons to be excited for this fall.

Despite having to replace its top runner from a season ago in Madi Folts — who took an 18th-place finish in Class C with a time of 22:02.9 — Attica will have its next three runners back this season as it looks to climb a few more spots.

At the GR/LCAA Championship, Nixon Sovocool and Toland all finished in the Top 25; Nixon took 12th with a time of 21:26, while Sovocool was 21st (22:06) and Toland was 25th (22:24). Bailey and Toland were both solid at the Alexander Invitational as well, taking 22nd and 27th, respectively.

Nixon is returning as a GR All-Star with 2019 Coach of the Year Bill Sikes.

With a small squad the Blue Devils boys struggled a bit last season, which included a 20th-place Class C finish. However, there is reason to be looking up this fall.

Of Attica’s top six runners at the sectional meet, only one graduated, with senior Parker Remington set to come back and lead the way this season. Remington had a time of 21:03.4 at the Class C meet last season.

Also returning will be a trio of sophomores in Jeffrey Hawkes, Hunter Meyers and Daniel Bialek, along with senior Alex Bialek.