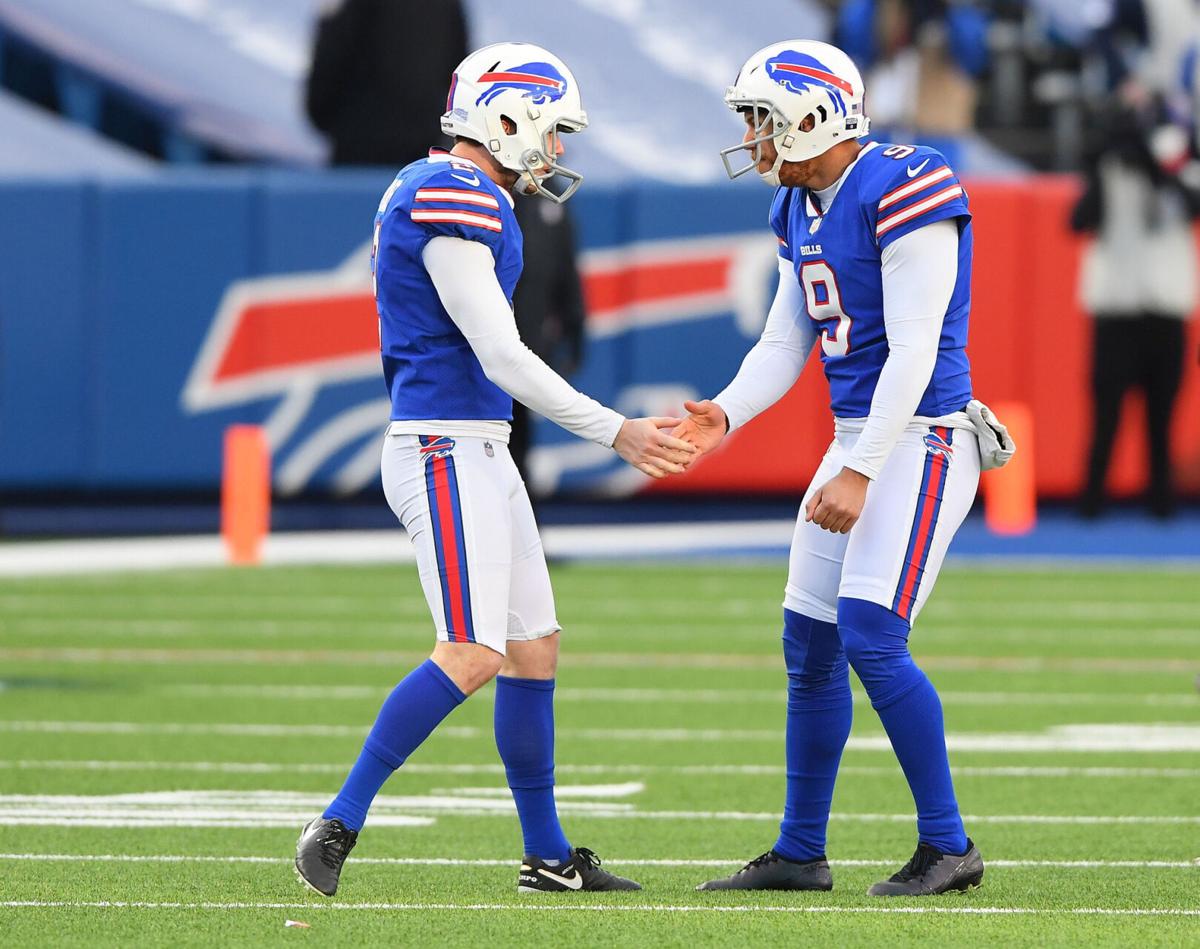 Rich Barnes/USA TODAY SportsBuffalo Bills kicker Tyler Bass (2) celebrates with punter Corey Bojorquez (9) his made field goal against the Indianapolis Colts during the second half in the AFC Wild Card game at Bills Stadium. 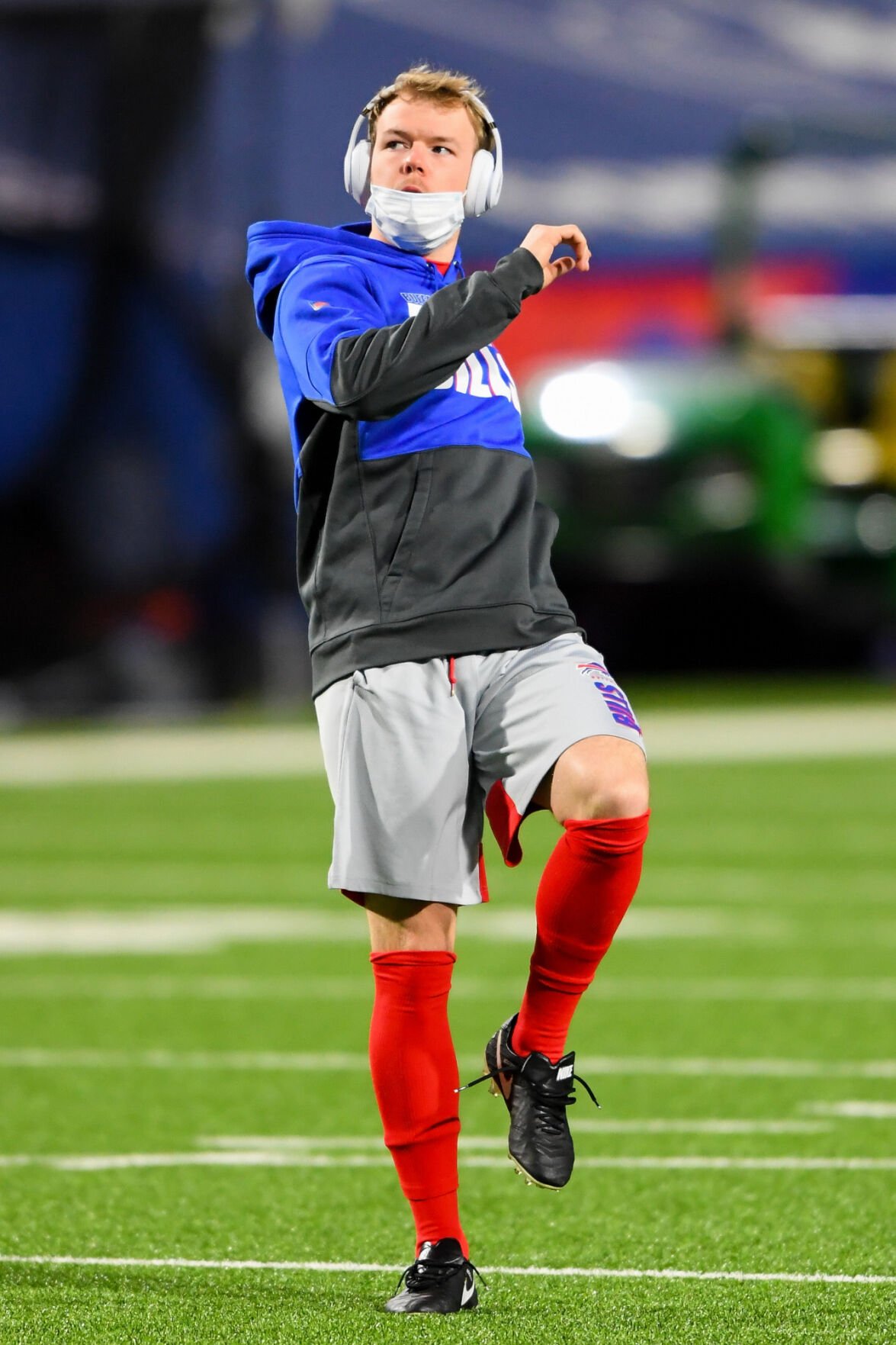 Rich Barnes/USA TODAY Sports Buffalo Bills kicker Tyler Bass (2) warms up prior to the game against the Pittsburgh Steelers at Bills Stadium.

Rich Barnes/USA TODAY SportsBuffalo Bills kicker Tyler Bass (2) celebrates with punter Corey Bojorquez (9) his made field goal against the Indianapolis Colts during the second half in the AFC Wild Card game at Bills Stadium.

Rich Barnes/USA TODAY Sports Buffalo Bills kicker Tyler Bass (2) warms up prior to the game against the Pittsburgh Steelers at Bills Stadium.

ORCHARD PARK — Bills kicker Tyler Bass has had one heck of a rookie season, but it didn’t start that way. Bass endured some growing pains through the first nine games of the season, beginning the year 21-of-27 on kicks with a missed extra point thrown in, leading Bills fans to question his selection in the sixth round of the draft.

Since Week 10, however, the former Georgia Southern Eagle has been perfect while helping Buffalo to their most successful season in over two decades, quickly becoming a fan favorite in the process. Much greater factors have played into the Bills’ success, but it’s been impossible to ignore the impact that Bass’ record-setting leg has had this season.

Just this past week, in the Bills’ Wild Card matchup with the Indianapolis Colts, it was Bass’ 54-yard field goal with 8:08 remaining in the fourth quarter that turned out to be the difference in a 27-24 Buffalo win. The 54-yard boot was the longest made field goal by a rookie in postseason history.

It couldn’t have been an easy decision for Bass and the Bills to attempt such a long field goal with the game hanging in the balance, knowing a miss would present prime field position to the Colts, who at the time trailed by eight. But in the end, Bills head coach Sean McDermott was willing to trust his rookie kicker to get the job done.

“It was awesome,” said Bills head coach Sean McDermott about his emotions following Bass’ big kick. “Just full trust in him. Full trust in our field goal unit and their execution. I’ve got a lot of confidence in those guys.”

That may not have always been the case for Bills fans, but for McDermott, the faith he’s shown in the first-year pro has never wavered.

“I just appreciate coach for giving me a chance,” said Bass after the game on Saturday. “And the guys for going out there, and we ended up executing, so it was fun.”

Bass has had plenty of fun this season while breaking records all across the board.

In Week 10, in a 32-30 loss to the Arizona Cardinals, Bass made three field goals of over 50 yards in the second quarter, which made him the first kicker in NFL history to make three from 50+ in a single quarter. In Week 7, Bass attempted eight field goals, which tied an NFL record, and made six of them, which tied a Bills’ franchise record. Against the Miami Dolphins in Week 17, Bass broke the Bills’ single-season record for points previously set by K Steve Christie (140 points) in 1998.

There have been many great moments for Bass this season, but none more directly related to the team’s success than his record-setting 54-yarder last week. What made the kick even more impressive was that Bass had to step back from the range he had previously determined for himself during pregame warm-ups.

“Our line into the wind was 53 yards, but coach asked me if I could back it up one, and I said yeah,” said Bass, who said this wasn’t the first time McDermott asked him to extend his range. “The Cardinals game it came up when it was a 58-yarder, and they asked me, and I told them yeah.”

Following Saturday’s win over the Colts, Bass described his pregame process regarding how he determines his range for a given game.

“We set two lines. We set our line where we feel pretty good about hitting, like 53. Then we have a drop-dead which is like the longest we can get if I hit it as hard as I can,” said Bass. “So right around in there. It’s just kind of how I’m feeling, how the game plays out and how the weather is.”

Against Indy, with beautiful conditions in Orchard Park, Bass knew he could test the drop-dead range.

“We knew we had a little bit more in the tank if I tried to hit it as hard as I can,” he said. “I knew if I put a good foot on it, a good contact on it, we would have a good shot.”

It turns out he was right.

“We hit one in warm-ups, so we felt pretty good about it. Just went out, didn’t try to overswing, just put a good contact on the ball and let it play out,” said Bass. “I didn’t really try to think much of it. It was just another kick, but I had a little bit of excitement going out and just trusted the process, and we executed.”

Bass’ bomb wasn’t a game-winner in a traditional sense, where you see the kick go through the uprights with time expiring to put a team ahead for good - but it was just as important.

“Just one kick at a time. I know I’m only as good as my next kick,” said the Bills rookie kicker. “So right now, I’m going to enjoy tonight but then just flush it and move on to the next. Just really trust myself, being composed, not trying to hit it harder than I need to hit. Not trying to do anything more than I have to. Just being myself. I still have some things to work on, but I’m happy with the win and (we) move on to the next.”

With his biggest kick of the year behind him, Bass is eager to put forth another impactful performance against the Ravens. Most of all, the Bills kicker looks forward to being once again surrounded by the fans, who he credits with pushing him to be his best every week.

When the game’s on the line, boy, are Bills fans happy to see Bass, too. Oh, how things have changed.