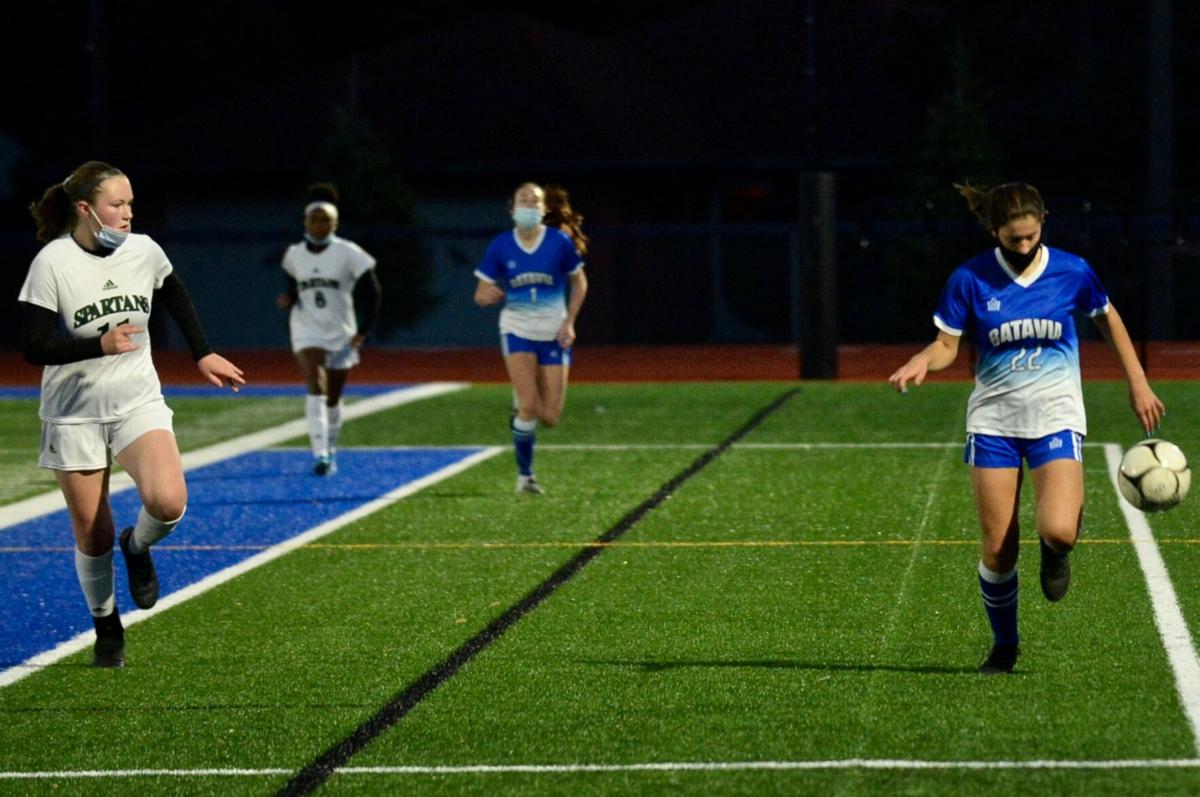 Alex Brasky/Batavia Daily NewsBatavia freshman Anna Varland tries to control the ball near the sideline during the Devils’ 1-0 win over Greece Olympia. 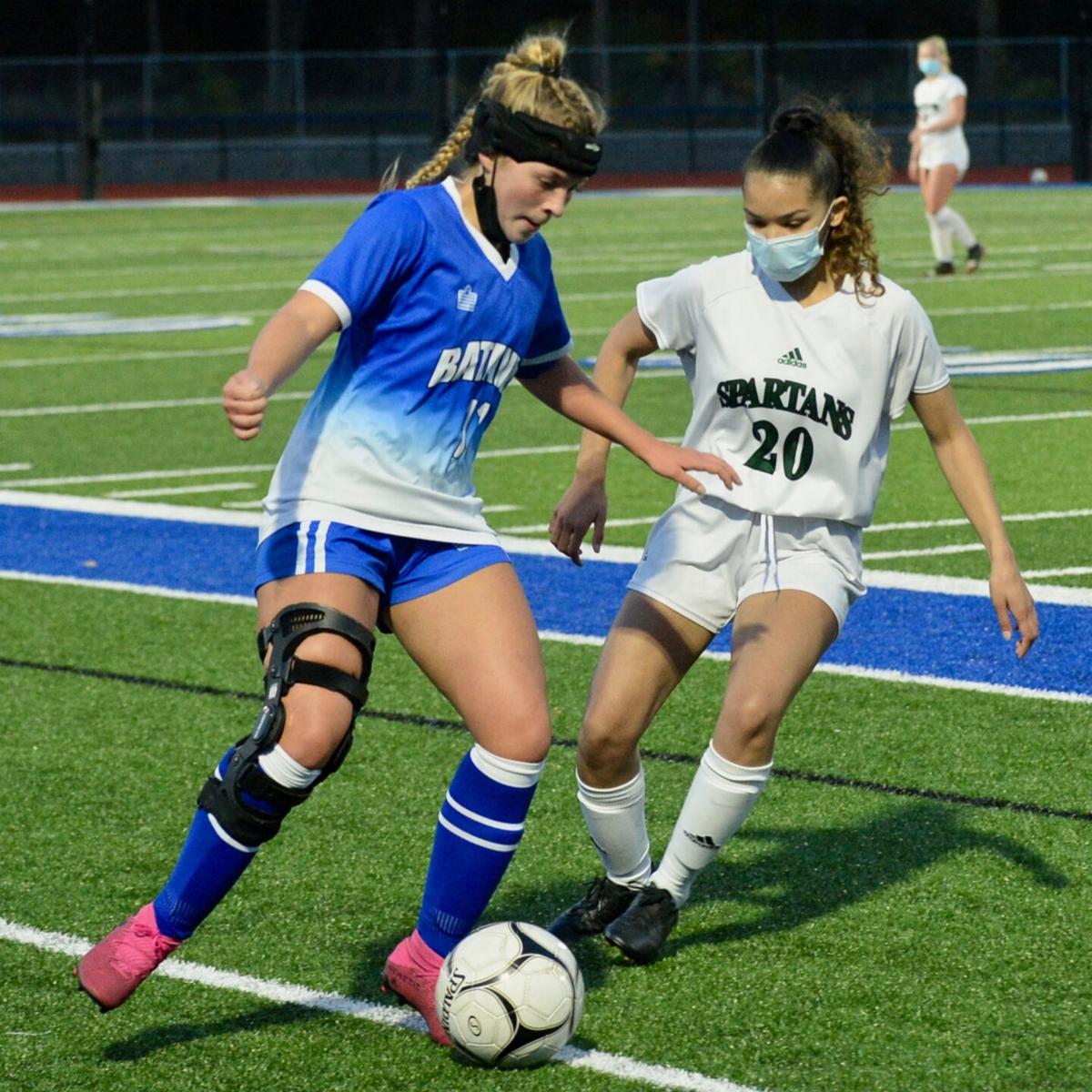 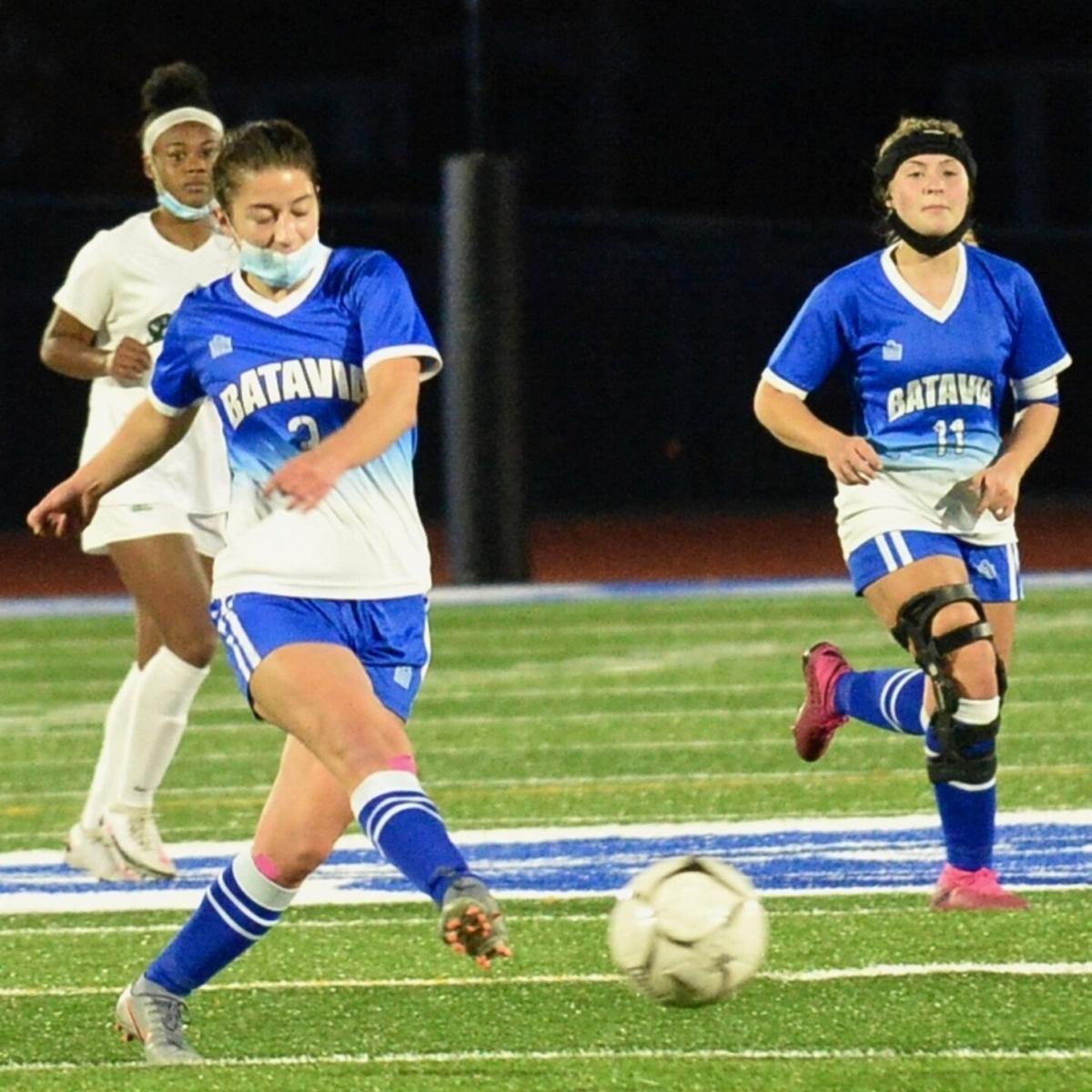 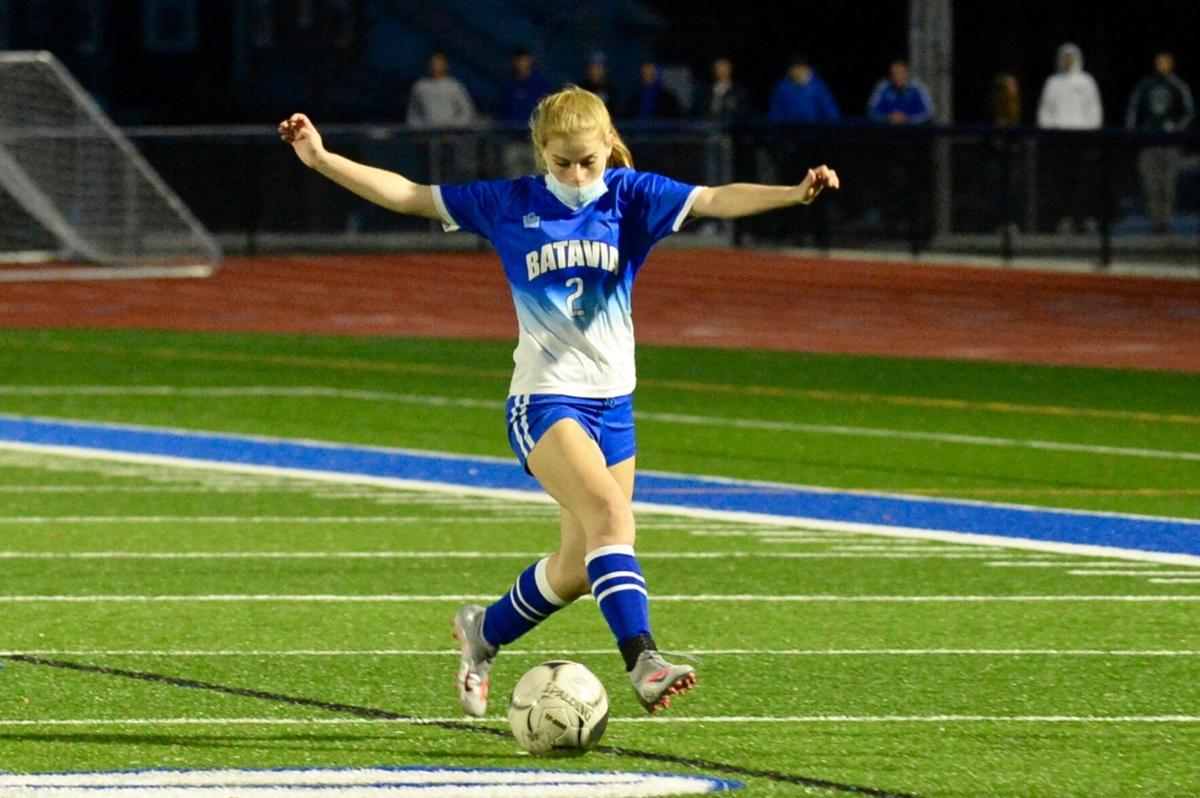 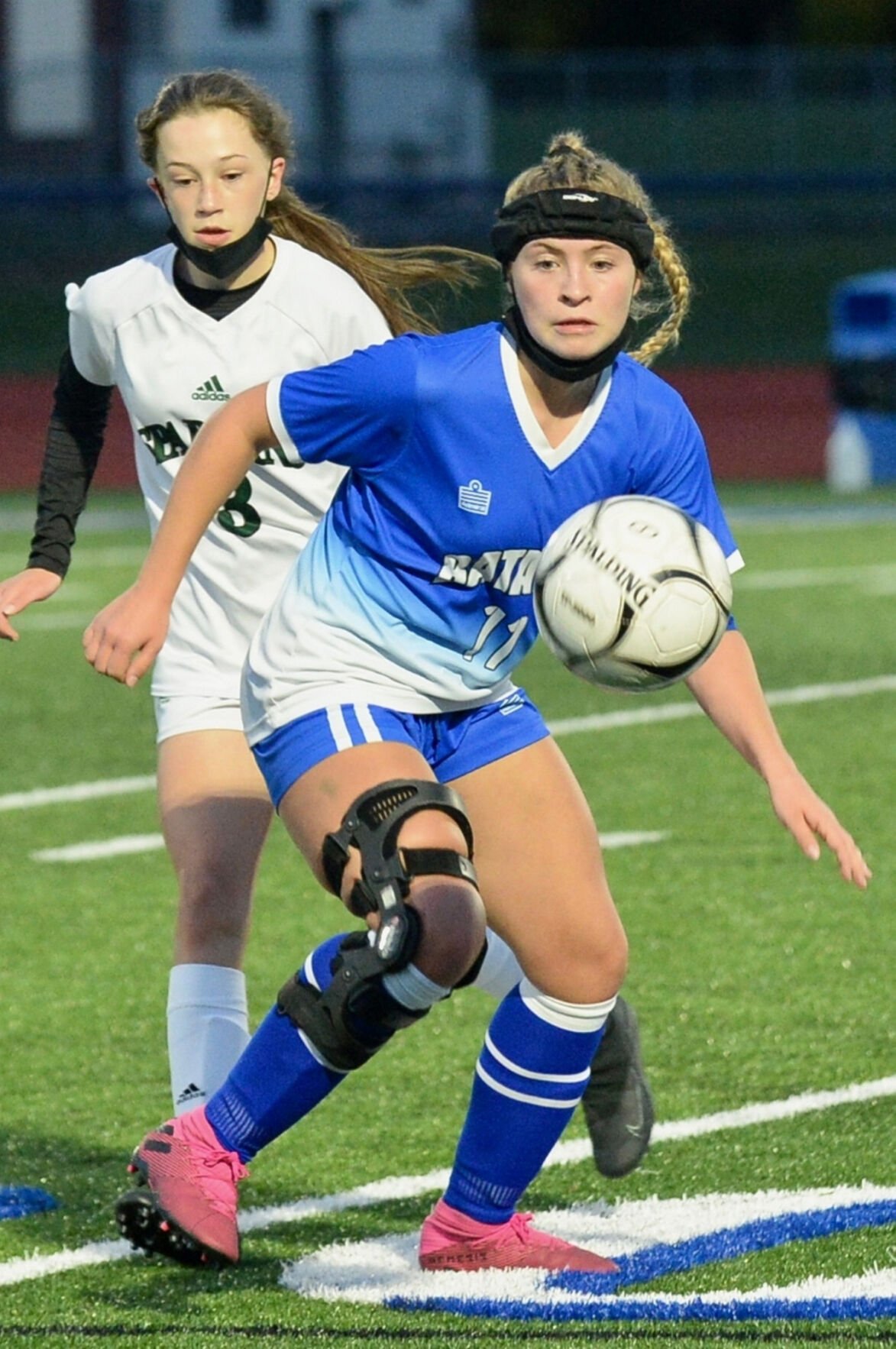 Alex Brasky/Batavia Daily News Batavia senior captain Sadie Loria chases down a ball before it rolls out of bounds as Greece Olympia’s Elizabeth Faulkner looks on.

Alex Brasky/Batavia Daily NewsBatavia freshman Anna Varland tries to control the ball near the sideline during the Devils’ 1-0 win over Greece Olympia.

Alex Brasky/Batavia Daily News Batavia senior captain Sadie Loria chases down a ball before it rolls out of bounds as Greece Olympia’s Elizabeth Faulkner looks on.

BATAVIA — It’s been a slow start to the season for Batavia girls soccer head coach Roger Hume and his Lady Devils, who lost three-straight to begin the year. The Devils’ fortune began to turn on Wednesday, as a goal from senior Ava Reinhart in the 76th minute broke the seal and proved to be the game-winner in a slim, 1-0 Batavia victory, their first of the year.

It was Reihart’s first goal of the season, and first goal as a Blue Devil, as she had spent her previous three years down the road at Notre Dame.

“Ava has brought a ton of experience to our lineup,“ said Hume. “She has played varsity for three or four years and her calmness around the box is big for us, as is her ability to finish at the net.”

“We have played well all four games this season and the players really deserved to get the win,” added Hume. “We knew we were going to struggle putting goals on the board (this year), so our defending needed to be solid which it has been.”

“Us coaches have seen good improvement on players connecting passes and our attacking,” concluded Hume. “Those are areas we have concentrated on all preseason. It was a great night for us.”

The Blue Devils keep rolling with another shutout victory, which is their third of the season.

Lainey Scoville netted four goals for Geneseo, the first coming in the seventh minute on an assist from Abby Kreher, which was followed by a goal from Morgan Walton in the 24th minute. Walton’s goal extended the Devils’ lead to 2-0, and Brogan Henderson scored a minute later off an assist from Scoville. Scoville later clinched the win with her final three goals in the 45th, 49th, and 60th minute.

Faith Hainsworth finished with five saves for her third-straight clean sheet for Geneseo.

“It’s always great to get a win on ‘Senior Night’. Usually, it’s your last home game of the year, but 2020 being what it is, we did our senior night at our first home game,” said Geneseo head coach Nick Drollette. “I’m glad we were able to honor this group of girls. They are a group who have really and truly raised the bar for those coming after them.

“I know the entire Geneseo community wishes them luck in their future endeavors,” added Drollette. “I am honored to have been able to be a part of their high school athletic experience.”

Clare Campbell and Ashley Carli each scored two goals for the Gophers. Carli added an assist, while Karlee Zinkievich and Kali Markek also netted tallies for Pavilion. Merkek, Shea Amberger, and Erica Palmer each chipped in assists for Pavilion.

Madison Lee scored both goals for Dansville, the game-winner coming in the 50th minute.

The Tigers scored three goals in a five-minute span. The first came from Chloe Hubbard in the 11th minute, which came on an assist from Emma Tangeman), followed by a tally from Mattie Heim in the 13th minute and one from Tangeman in the 15th minute. Makaylah Higgins recorded assists on the goals from Heim and Tangeman.