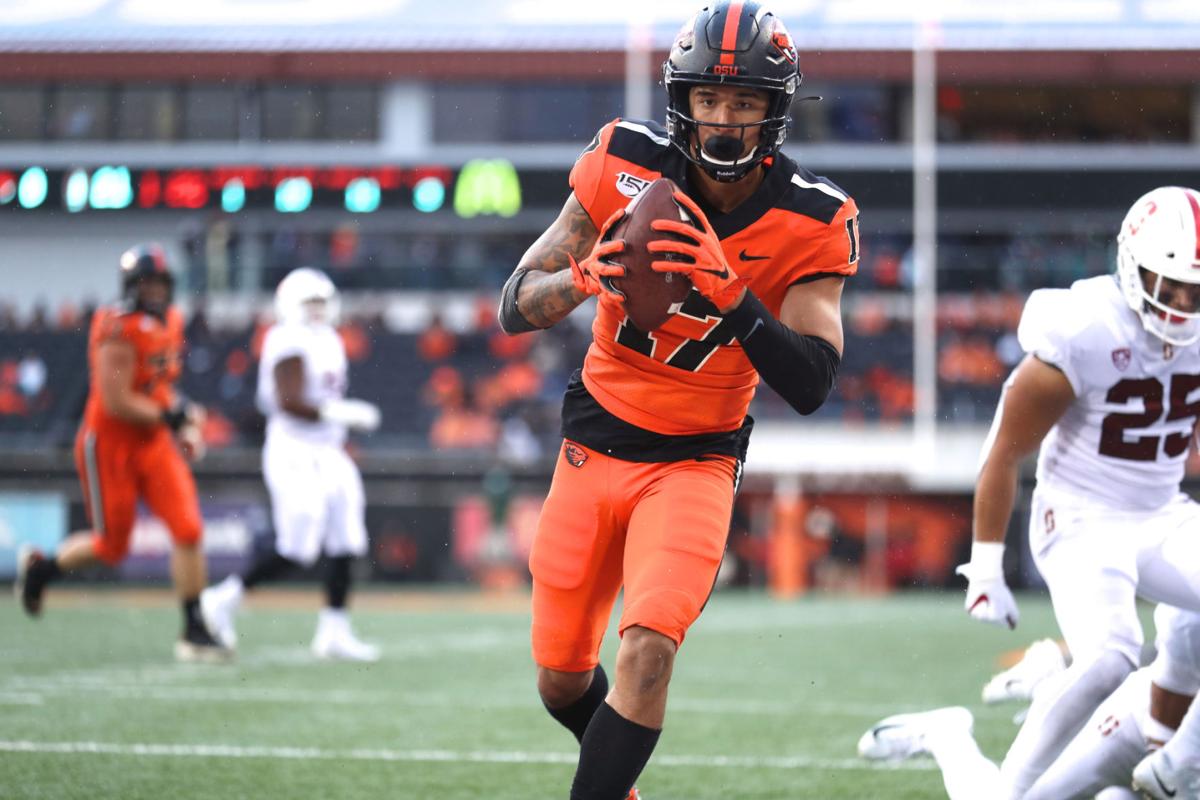 Jaime Valdez/USA TODAY SportsThe Bills selected two wide receivers in the 2020 NFL Draft, one of which was Oregon State WR Isaiah Hodgins in the sixth round. 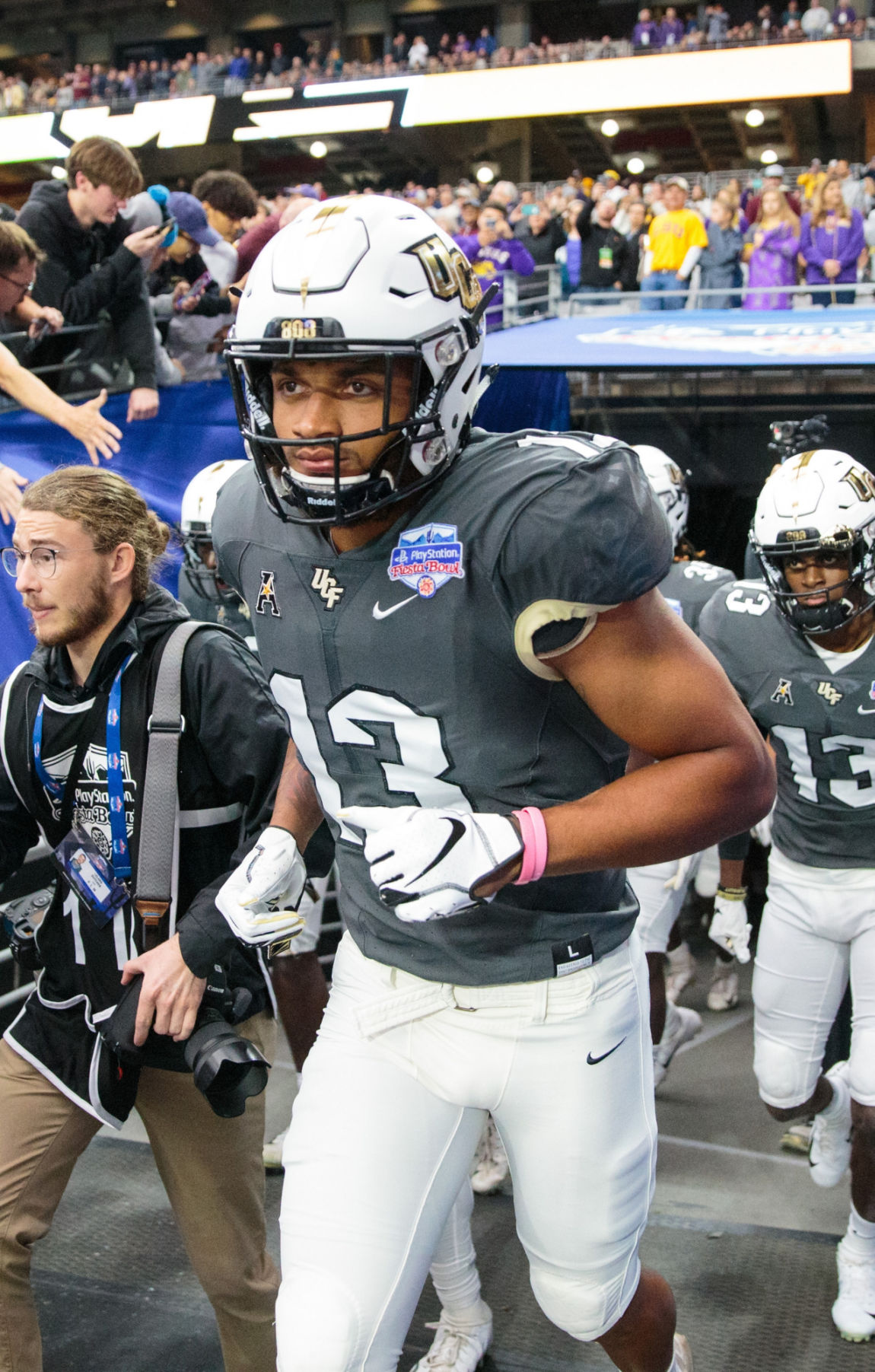 Jaime Valdez/USA TODAY SportsThe Bills selected two wide receivers in the 2020 NFL Draft, one of which was Oregon State WR Isaiah Hodgins in the sixth round.

ORCHARD PARK — It’s clear that one of Bills’ general manager Brandon Beane’s primary objectives this offseason was to surround quarterback Josh Allen with a plethora of young offensive weapons, in hopes of propelling the young gunslinger to a new level of success in his third season under center.

After trading for wide receiver Stefon Diggs, the Bills went on to add running back Zack Moss with their third round pick of the 2020 NFL Draft, and followed that up with the selection of two more receivers in the fourth and sixth rounds.

Taken with picks No. 128 and No. 207, respectively, Central Florida WR Gabriel Davis and Oregon State WR Isaiah Hodgins are both big-bodied targets that have the potential to bring an added dimension to the Bills’ pass game.

“Yeah, I got tired of hearing Sean call our group (of receivers) the smurfs. So we decided to get some larger ones,” said Beane about Davis and Hodgins, who stand six-foot, two-inches and six-foot, four-inches, respectively.

Davis is a player who can go up and get it, says Beane.

“He’s a big player. Vertical stretch, can go up (and) high point the ball, contested balls,” said the Bills’ GM. “And again, a size guy. He’s a strong guy.”

Hodgins’ lack of drops was something that stood out to Buffalo during the pre-draft process.

“I don’t know if he had more than one or two drops this year,” said Beane. “Another catch radius, bigger guy, bigger frame player.”

Both rookie wideouts will be thrust into what has suddenly become a jam-packed wide receiver room in Buffalo.

“Those two guys will come in and they’ll be competing against each other, along with Duke Williams and some of those other big guys that we currently have on the roster,” said Beane. “The theme (in) a lot of areas is competition, competition, competition ... We’ve added Stefon (Diggs). We got some guys coming back with Isaiah McKenzie, Robert Foster, and then adding these two big guys to come in here and compete.”

The Bills hope Hodgins and Davis will allow them to become more versatile at the wide receiver position.

“Just trying to give (Bills’ offensive coordinator Brian Daboll) as many variations (of a receiver as I can),” said Beane. “Not to have all the same small guys, fast guys, big guys. I like that.”

Buffalo was able to select not one, but two of what they view as quality, big receivers due in large part to the great depth at the position in this year’s draft.

“It was true, we talked about it all spring. This was a deep (receiver) class,” said Beane. “There were some really good receivers; small, big, fast, quick. I thought a lot of teams got better at the receiver position.”

The Bills’ offense is growing at a rapid rate, as Hodgins and Davis will be part of a strong new crop of offensive talent.

“I think we have addressed some important things. Obviously getting Stefon Diggs was probably the biggest thing we did this offseason offensively and I hope that will open up things for everybody,” said Beane. “We’ve added some size (receivers). I think (Bills’ third round pick running back) Zack Moss, a young physical bruiser with some competitive speed and can catch the ball. So, I like what we’ve added.”

While the Bills did not have a first round pick and went defense with their second rounder, it seems as if the team’s draft strategy centered around the offensive side of the ball. Following the selection of Iowa defensive end AJ Epenesa, Buffalo’s next five picks were spent on players that help put points on the board - something Buffalo didn’t do enough of last season.

Buffalo ranked 23rd in the NFL in points per game in 2019 and, while Allen’s progression was clear, it appears as if Beane and company are looking to take that progression to a whole new level in year three.

The Bills are committed to becoming a more-capable offensive team and that starts with the quarterback. However, that quarterback needs help, and finally Allen appears to have it.