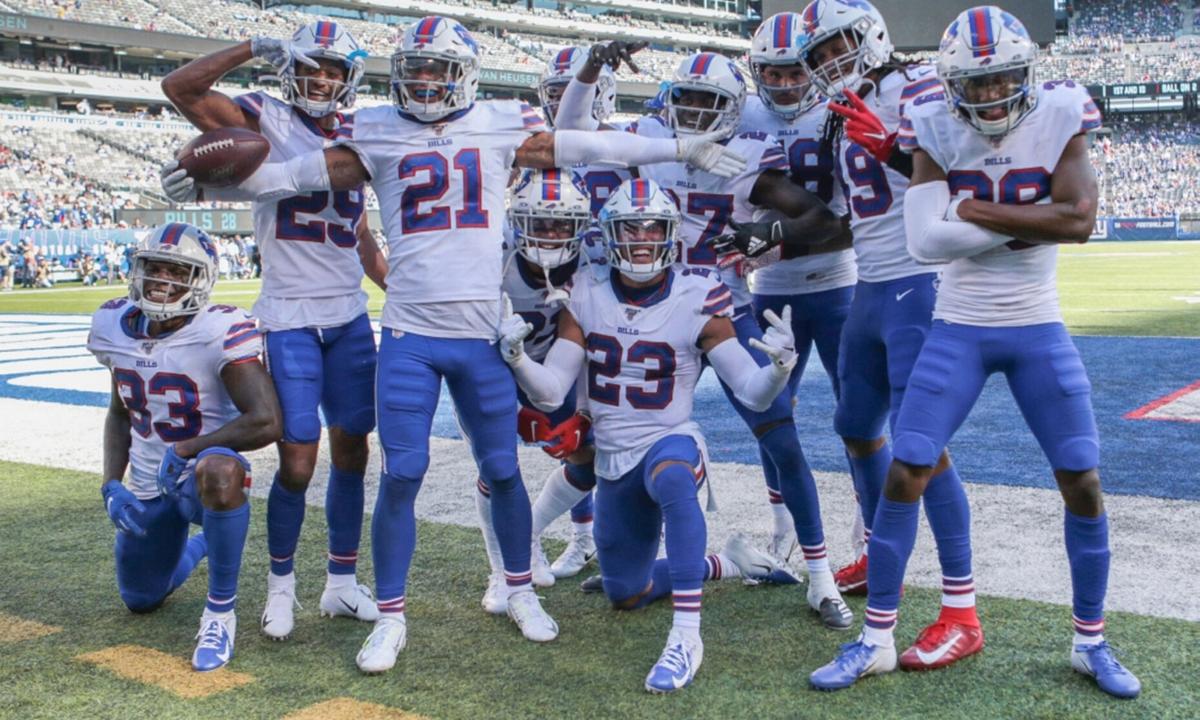 Vincent Carchietta/USA TODAY SportsBuffalo Bills free safety Jordan Poyer (21) celebrates with teammates after an interception against the New York Giants during the second half last year. 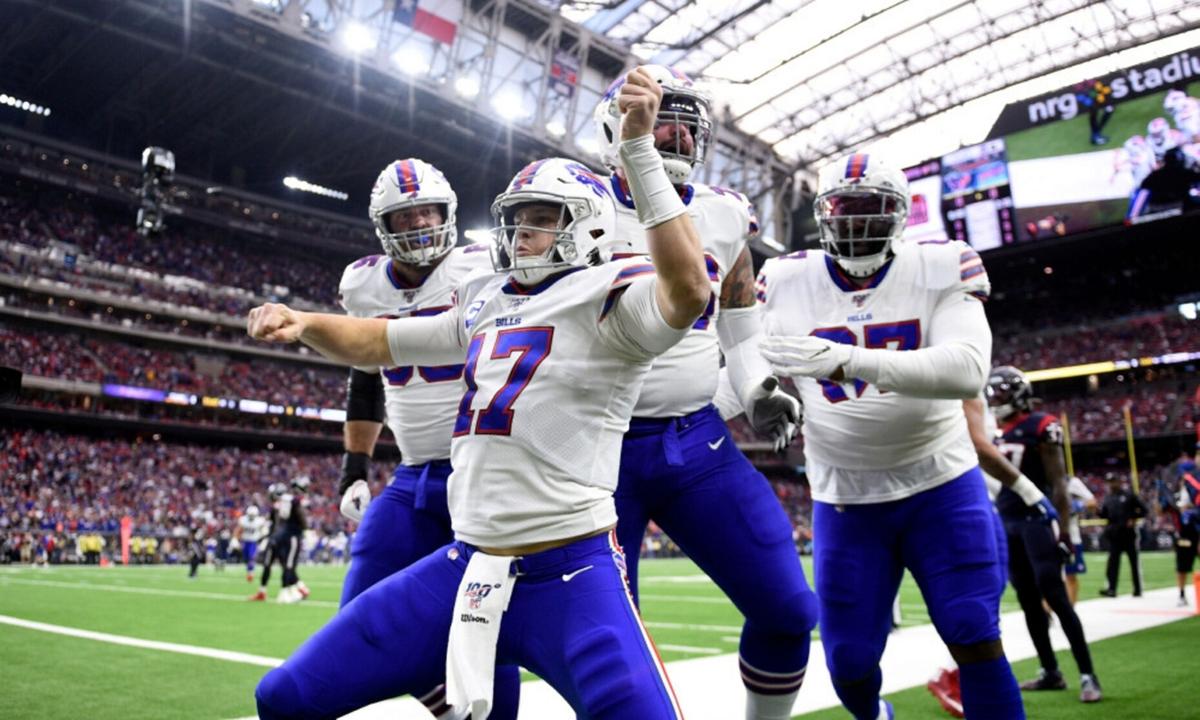 USA TodayBills quarterback Josh Allen (17) celebrates after catching a pass for a touchdown against the Houston Texans during last year’s 22-19 playoff loss. 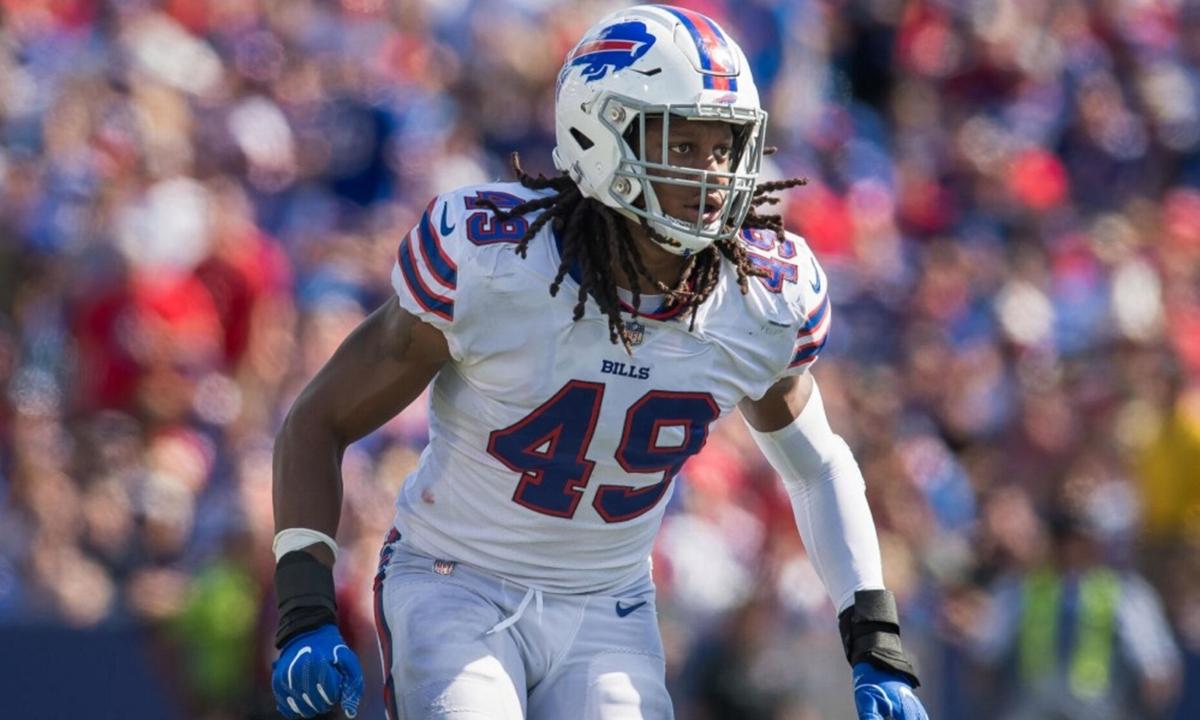 Vincent Carchietta/USA TODAY SportsBuffalo Bills free safety Jordan Poyer (21) celebrates with teammates after an interception against the New York Giants during the second half last year.

USA TodayBills quarterback Josh Allen (17) celebrates after catching a pass for a touchdown against the Houston Texans during last year’s 22-19 playoff loss.

In 2019, the Bills finished with a 10-6 regular season record with two of those losses coming against New England and one against the Jets, Ravens, Browns, and Eagles.

Their 22-19 playoff loss to the Texans came in OT after the Bills blew a 13-0 halftime lead.

Many are expecting big production from the offense led by QB Josh Allen, who enters his third season at the helm.

Adding Vikes receiver Stefon Diggs has brought in hopes for a deep threat receiver after his 1,130 yards and six TD’s a year ago with Kirk Cousins under center.

Diggs was fourth in the NFL averaging 18 yards per catch.

Defensively, the Bills allowed just over 16 points per game, second-best in the entire NFL.

In his three seasons, head coach Sean McDermott has taken the Bills to the playoffs twice.

Many are believing the Bills are ready to take that next step.

Many of our local coaches think so as nobody has predicted the Bills will win less than nine games this season and many feel they are ready to get back to the Super Bowl.

Here’s what they had to say...

“Hope they do better but I think 10-6. The Chiefs and Titans will be very tough and going on the road to San Fran, Denver, and even at Arizona will be tough. I love the direction the Bills are heading in and I really like McDermott’s plan and his discipline.”

“As a long time Bills’ fan, I am super pumped. I remember me my dad and my brother huddled around the radio during the Bills comeback game against the Oilers because it was blacked out. Anyway. I can see the Bills going 11-5. I think the defense has remained top five if not improved with some of the talent they have brought in. Offensively, I think the additions of Diggs and a young complementary back in Moss to name a few will only help an amazing athlete like Josh Allen. I believe Josh Allen will make improvements just as he did in his last two years. I really think McDermott, Beane and the coaching staff they have assembled will carry this team. The more I read about them, the more I think they may be one of the top staffs in the league. They are a no-nonsense business approach. They are prepared for just about anything. They make all their players earn it, and most importantly they buy into the ‘no one is bigger than the team’ philosophy.”

“This GM and head coach have done a tremendous job of putting a team together through draft picks and free agents. All that fit the team-first mentality. Listen to the interviews with players, they all sound like one another. “‘Stay hungry and humble.’ Team goals over individual. I heard an interview a few weeks back with Diggs, and he was asked about his early impressions of (McDermott). ‘The players on this team would run through a wall for him.’ That is very telling of the atmosphere created by this staff. The days of Ryan and Whaley are so far distance now, this team in my opinion is ready to make that next step. The last three drafts, 19 players on the roster as of today. How many teams around the league can say that? Young stars on both sides of the ball. Defense was a top five last season, and will only get better. Three legitimate wide receivers. Think about Allen’s first season and the guys he had to throw to, are any of them still in the league? The only unfortunate factor is no more home field advantage. Hopefully that too will pass soon. I really believe Allen will have a breakout season, can’t wait to get this thing started. Go Bills!”

“In my heart the Bills will go 16-0. In my head they go 12-4 losing to the Chiefs, Seahawks, 49ers , and at least one game they should probably win (not sure who against, maybe a split with the Pats or a tough loss to the Rams). Overall they improved in all aspects of the game. I look forward to a great one-two punch with Singletary and Moss as well as a deep receiver core led by Diggs. As long as Allen takes even a small step forward it will be smooth sailing. The Bills defense speaks for them self. They have the most underrated safety duo in the league with Hyde and Poyer as well as other high grade talent including Trey White and Edmunds. Once these Bills hit the playoffs who knows where they’ll go! In my eyes, the only thing better than a Bills Super Bowl win would be a fighting Irish national championship. Go Bills!”

“Josh Allen has weapons this year which should help and defense will be solid if they can stay healthy.”

“I think they go 12-4. They will upset KC at home. That would be their signature win. Dolphins might be worst team in football but might beat Bills week 17 with Buffalo starters all resting. Tough playing the NFC West but probably will lose one maybe two there.

“As a Cowboys fan, I’m not sure I’m the guy, but I love the moves they’ve made. Beane and McDermott seem to be in lock step and the roster is solid. I still think the division goes through New England until proven otherwise. That said, the long wait is over for Bills fans. I think 11-5 and a division title!”

“First off, I would like to start by saying I am a diehard Cleveland Browns fan. I can already hear the boos! With that being said, I do pull for the Bills as my second team. I personally think the Bills are going to have a great season. I strongly believe behind the trio of Allen, Diggs and Singletary — the Bills will go 11-5 and finally dethrone the Patriots to become the new sheriff in town in the AFC East. So in closing, go Brown, go Bills and amen football is back!”

“I want it to be known that I am a huge Vikes fan and will never ever change that lol! The Bills have the third best roster in the AFC. I think they run away with the AFC East at 11-5 and finally get that home playoff game all Buffalo fans have been dreaming about. Unfortunately, I’m not sure they’ll be able to attend but only time will tell. Go Vikes!”

“I’m seeing 10-6 for the Bills this season. They have a nice squad and have a big shot at the playoffs but they have some sneaky good teams on their schedule like the Las Vegas Raiders. Did you know the Autumn Wind is a Raider? Also, not having to play against the best player of all-time in Tom Brady should definitely help.”

“I’ll be honest, I don’t know where to go with this because I don’t follow the Bills too well. I’d guess 10-6 though with a playoff berth. They had a lot of success last year and the Patriots might not be as strong so they’ll do well in their conference. The offense has added some power and the defense has been tough as of late. It’ll be a matter of continuing the momentum they developed last season. That said, they have some tough games including Kansas City and Seattle.”

“I believe the Bills will finish regular season 10-6 and win the division. Quick: When was the last off-season that the only question mark the Bills had was at wide receiver? Answer? Never. What a problem to have. The addition of Stefon Diggs makes everyone more dangerous on a team with a strong defense. Reminds me of the 1988 and 1989 seasons. So close, tough playoff losses. Be prepared for a division title and playoff berth and another heartbreaking loss. After this season? Four More Years Part II, but this time a Lombardi Trophy.”

“I think the Bills will go 11-5. It’s exciting to see them heading in the right direction and continuing to build a talented roster. They have a much tougher schedule this year, and potentially a target on their back as being a team predicted to do well. Win the division and pick up at least one playoff win. This team and coaching staff all seems to be on the same page. Exciting time to be a Bills fan.”

“Expecting the season to be around 10-6. They have a solid defense and great tools on offense. As is usual, a lot will depend on the kicker at the end of the game, and staying healthy. They just need to get over the hump, and this might be that year.”

“Well I think the Bills will have a good season as they are young, but very talented. Their quarterback, Josh Allen, was raised on a farm and knows how to work hard to reach his goals. Although the weather may be his downfall in Western NY as it does get cold and snowy there, with no covered stadium. I am guessing a 9-7 season and wishing Josh great luck on the field!”

“The Bills will go 11-5 and host a wild card game. I think this is a reasonable prediction. If Josh Allen doesn’t make any progress and is sloppy with the ball maybe they only win 9-10. If Allen takes another step forward and the offense becomes a top 10 group to match the defense competing for the AFC ticket to the Super Bowl could be realistic. My buddy Jeff Schirmer thinks Allen isn’t any good but he is a bad judge of talent. I think Allen takes another step and so does this young talented Bills club. Get on the Wagon now the Bills are back!”

It is going to be a good year for the Bills Mafia! We will finish 11-5 and win the AFC East title. Jets and Dolphins are not challenging foes and as for the Patriots, Cam Newton is not Tom Brady on the field. Cam is an electric player but the Brady-Belichick combo will be sorely missed in the New England franchise. Considering the defense, they are top notch compared to other defenses and Josh Allen and the offense have been building their cohesiveness and play execution over the past two years. It will be a breakout year for Bills organization and it will be great to watch.”

For starters, I am a huge Bills fan. As most of us would agree, it has been a long journey of ups and downs while cheering on this team. But, I believe the Bills are well on their way to building a team that will be formidable for the foreseeable future. This team does not have a glaring weakness across the board and they have depth at many positions. Josh Allen, year three, is going to surprise many of his naysayers. He has so many weapons around him, that the offense should not have to be carried by their traditionally strong defense. This is the year that the Bills re-establish themselves as one of the NFL’s elite teams by finishing 11-5 finally getting a playoff victory.