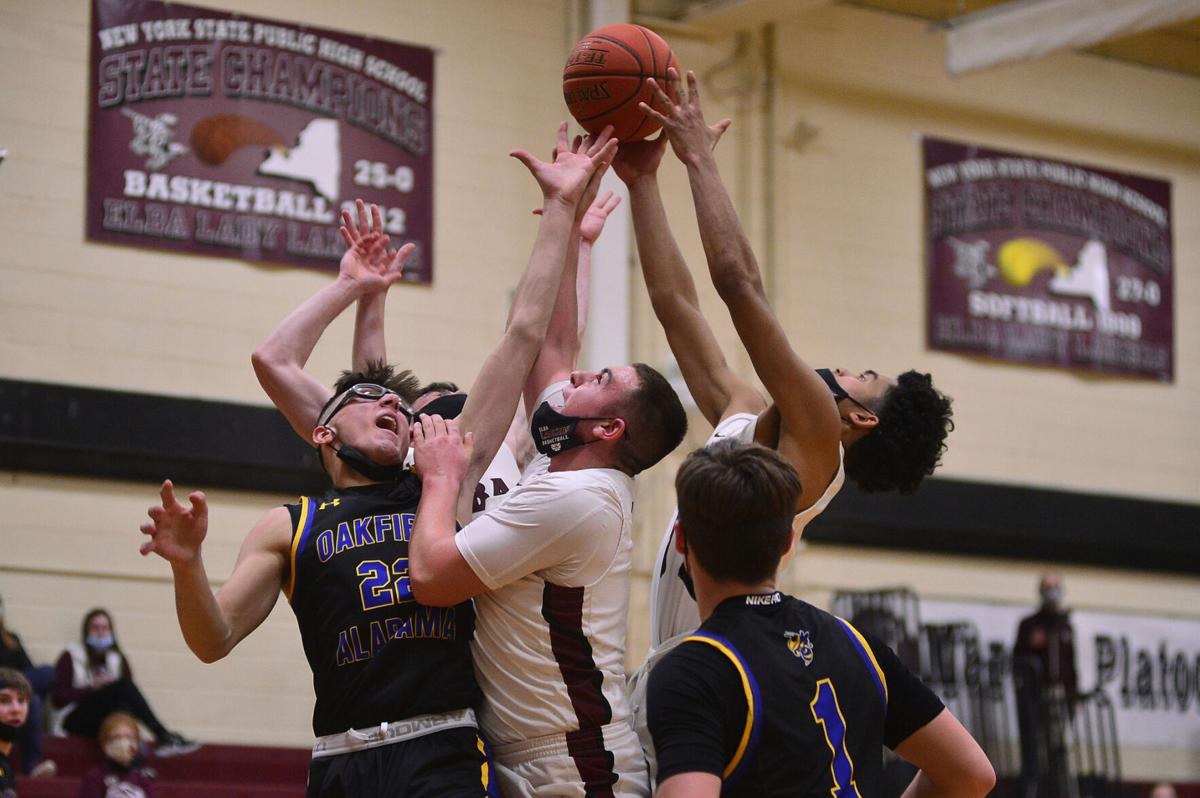 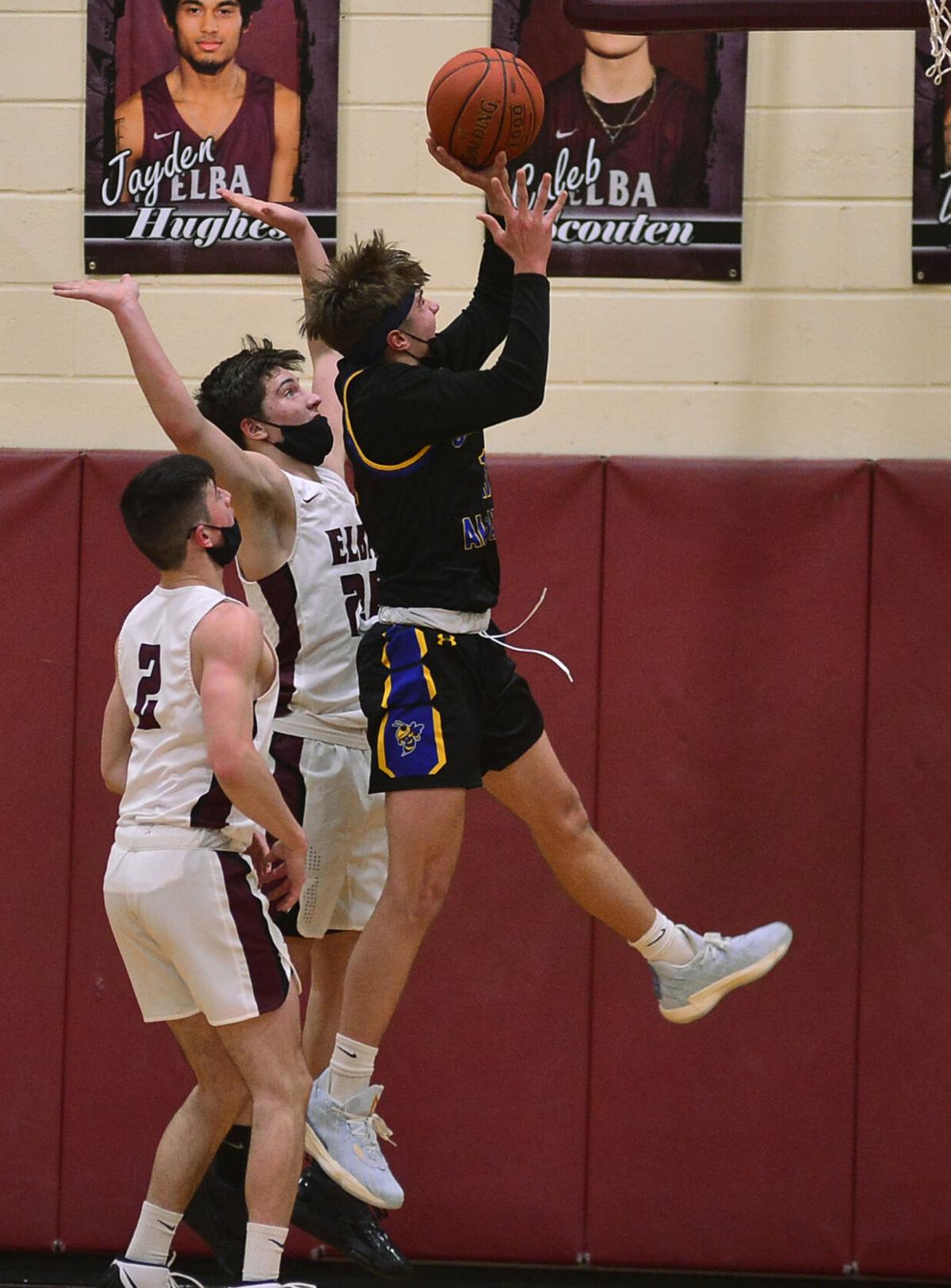 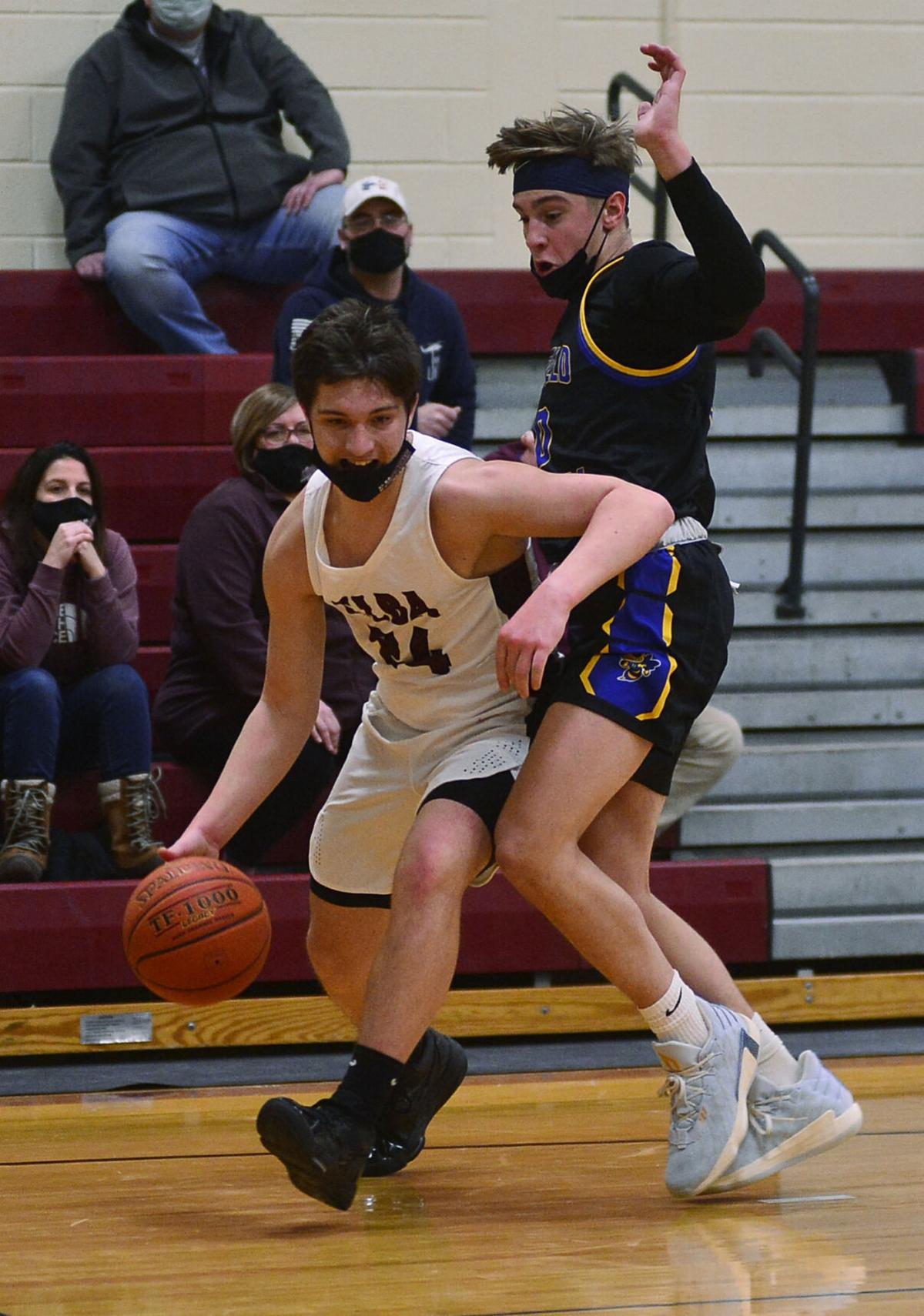 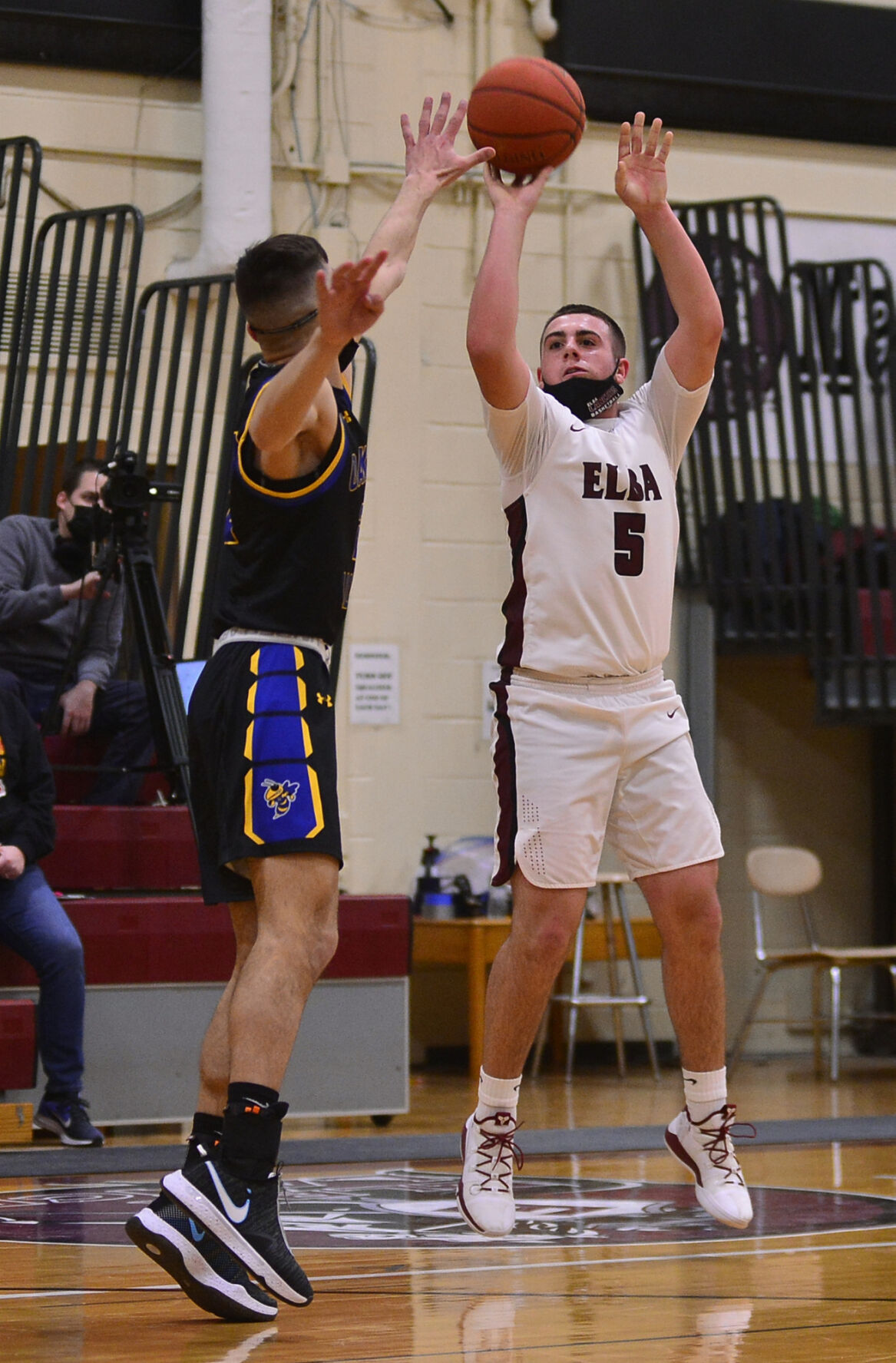 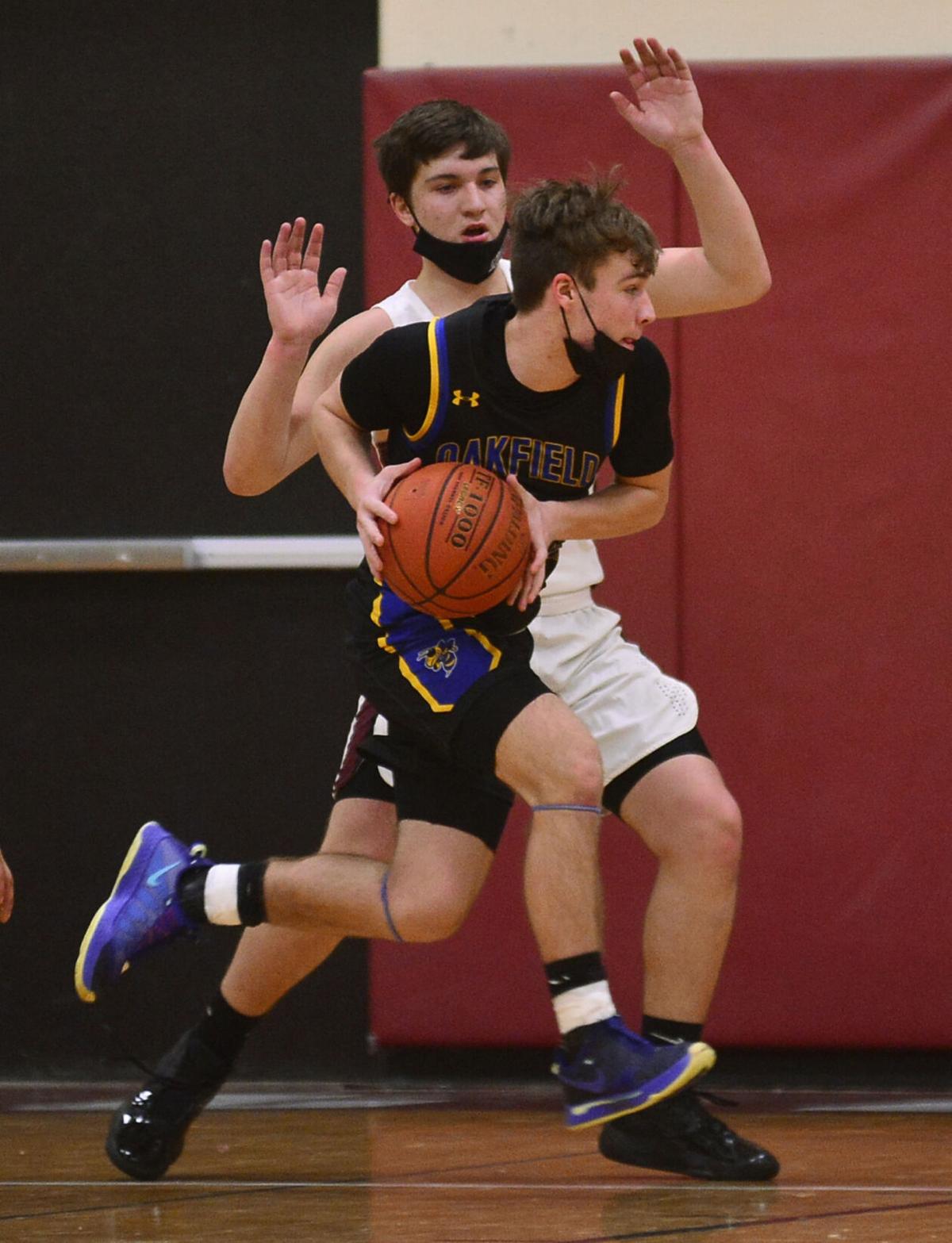 ELBA — In a back and forth game at Elba High School, Oakfield-Alabama’s Gaige Armbrewster and Kaden Cusmano recorded double-doubles as the Hornets improved to 2-1 with a 63-42 win over the Lancers.

O-A trailed by 11 points early in the first half but came back to tie the score at 24 at the break. The Hornets recorded an explosive third quarter and led by as many as 24 in the second half before taking home the 21-point win.

“I was very proud of the effort and energy of the team tonight,” said Oakfield-Alabama head coach Ryan Stehlar. “All 12 guys stayed focused on the game plan.”

Elba seized an early advantage on hot shooting from C.J. Gottler and Connor Scott, as Gottler knocked down two threes and Scott added another during a first half that saw the Lancers secure an 11-point lead. O-A came storming back over the final minutes of the second quarter, as Armbrewster took it upon himself to keep his team in the game and then lead them back down the stretch. The O-A junior finished the first half with 10 points while going 6-of-9 from the free-throw line.

“I was really proud of his leadership and composure the whole game, but in the first half, he did a nice job making plays for us,” said Stehlar about the performance from his junior star. “He did that last year and continues to do so early on this season. So I’m just glad his hard work is getting noticed.”

For Elba head coach Ciaci Zambito, he and his team were forced to swallow a bitter pill at halftime. The Lancers felt they had control of the game at times during the first 16:00, only to go into the halftime locker room tied at 24.

“I thought we came out in the first half, the first 10 minutes especially, and dictated the tempo of the game, which is why we jumped out to a lead,“ said Elba head coach Ciaci Zambito, whose team was able to slow things down early on. “Going in tied at halftime, I wanted to express to my guys that the first three minutes of the third quarter was going to really set the tone for the rest of the game. Which it certainly did.”

Oakfield-Alabama came out of the locker room as if their hair was on fire, outscoring Elba 24-8 in the third to take a 16-point lead going into the fourth quarter. The Hornets followed that up by outscoring the Lancers by five over the final eight minutes to secure the blowout win.

“We picked up the pressure and made a few adjustments on defense to begin the third. That allowed us to play our style and not let the game slow down,” said Stehlar. “We just preached one possession at a time. You play four quarters, not one, so we had to weather the storm and stick to the plan.”

In a complete team effort, Armbrewster scored a game-high 18 points to go with 10 boards and four assists, while Travis Wiedrich added 17 points and Cusmano chipped in 15 points and 11 boards.

“Kaden made some big plays early in the third, which got us out in the open floor,” added Stehlar. “Tempo fuels this group, so it was nice to get that momentum that was missing early on.”

For Elba (2-1), freshman Connor Scott was impressive on both ends of the floor and finished with 12 points, while senior Caleb Scouten added 11 points.

“Oakfield came out in the third quarter and really took it to us,” added Zambito. “My hat goes off to those guys because they made a ton of plays in that stretch where the lead really grew. They were definitely worthy of winning tonight. We have no time at all to feel sorry about the loss as we head into a big-time game at Notre Dame on Friday. We’ll see what we’re made of.”

Following their matchup with the Irish, Elba will head to Attica on Tuesday. The Batavia Daily News will stream both games LIVE on our YouTube Channel. Oakfield-Alabama looks ahead to a matchup with Wheatland-Chili on Friday.

“Wins in the (Genesee Region League) are never easy,” said Stehlar. “So we will enjoy this one tonight and get focused for the next game.”

The Bees bounced back from a tough loss to Pembroke with a win over the Blue Devils on Wednesday. Attica seized a 20-16 lead during a high-scoring first quarter, but the Bees battled back going into halftime. During the second, B-B hit five three-pointers, two apiece from Nick Baubie and David Brumsted and the other from Gianni Ferrara. The barrage from beyond the arc propelled the Bees to a 39-28 halftime lead.

“It’s a funny game. Monday night versus Pembroke, we struggled to make a layup. Tonight, the guys got hot from distance and knocked in 10 three-pointers,” said Byron-Bergen head coach Roxanne Noeth. “Sure makes the game a lot more fun for them.”

Attica went on a run to begin the third quarter and cut their deficit to four. The Bees defense bent, but it did not break.

“We knew they would come out and make a run because that’s what good teams do,” added Noeth. “As soon as we got our first bucket of the quarter, everybody settled down and we built the lead back up from there.”

“It was a big-time effort by all of our guys tonight,” said Noeth. “I couldn’t be more proud of them.”

For Attica (2-3), Ayden Goll scored a team-high 22 points to go with nine assists.

James Tette scored 11 points, but it wasn’t enough, as the Hawks fell to 1-4.

“For the first time all season, we actually played a full game on both side of the ball,” said Alexander head coach Wayne Hanley. “Defense was solid and the offense really clicked. Lnydonville is a very good team and it was just our night tonight. Hopefully this will get us going. We are a young team but we’re learning each game.”