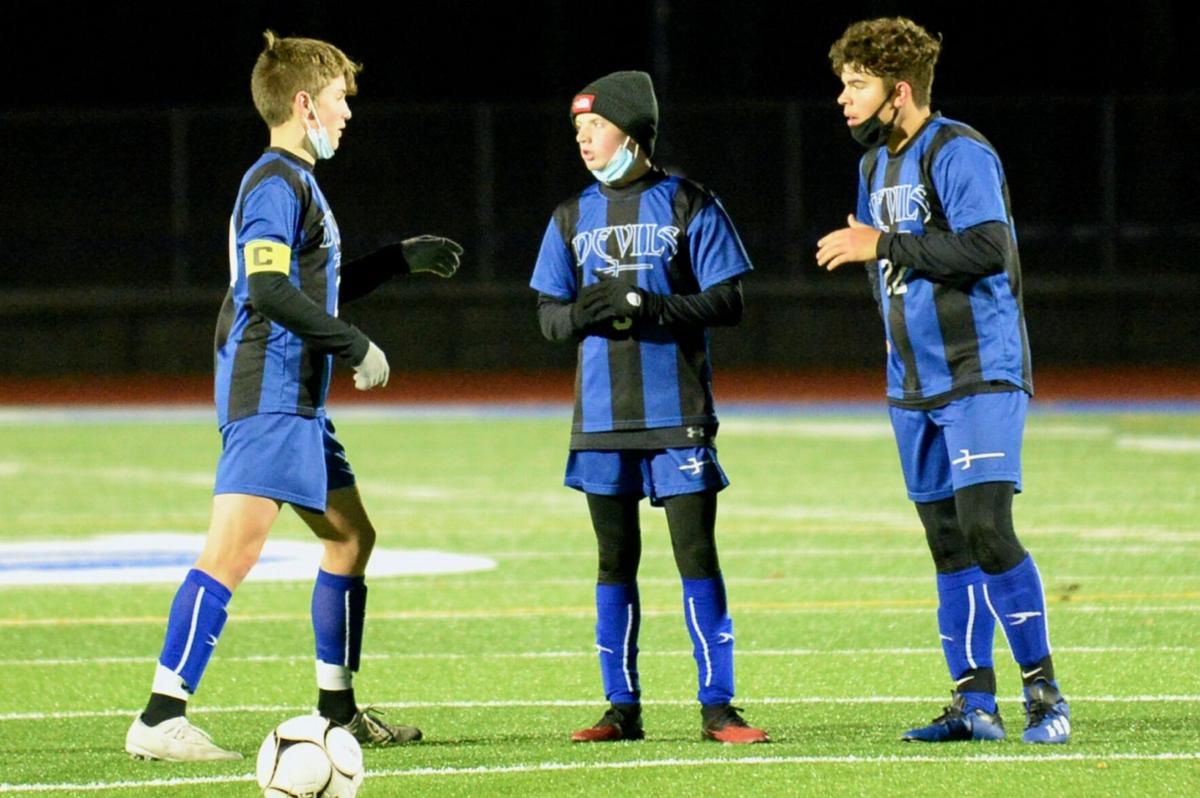 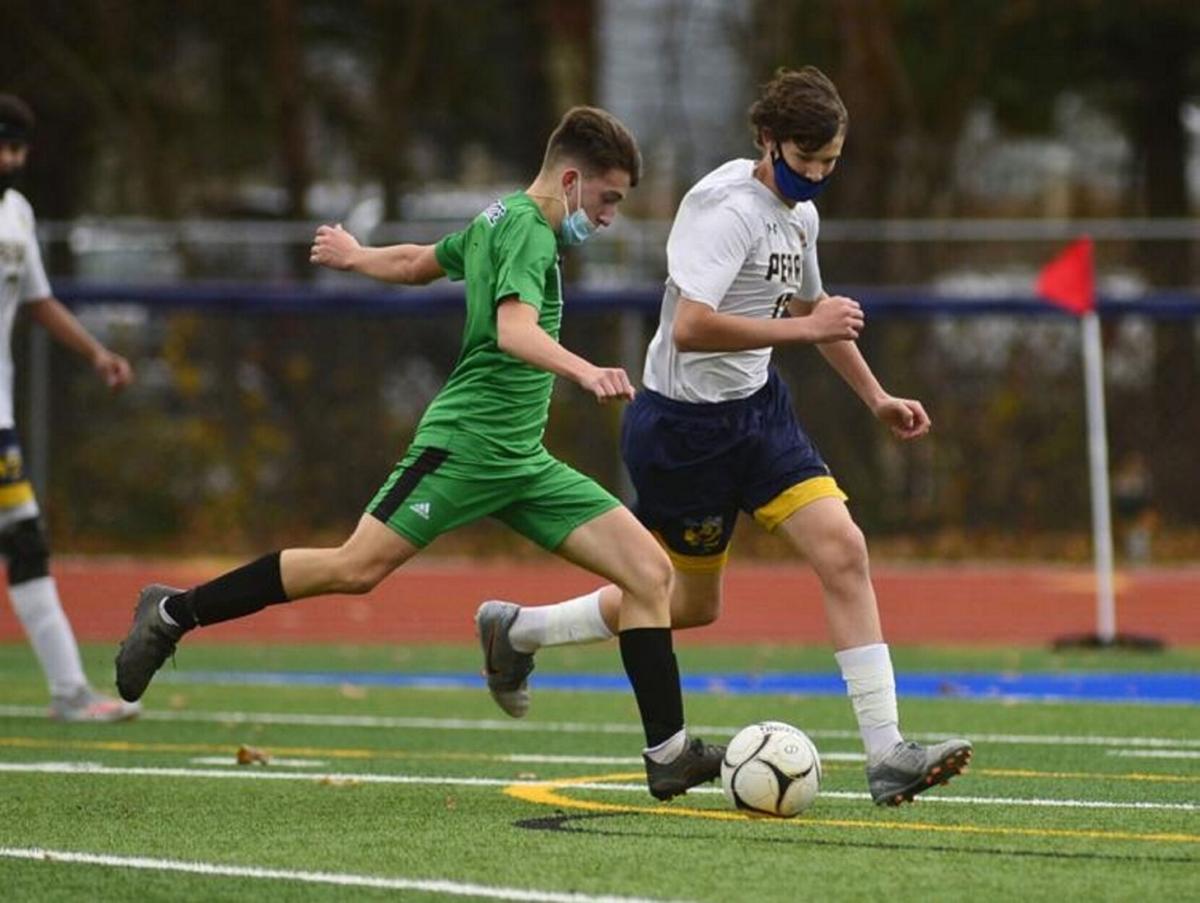 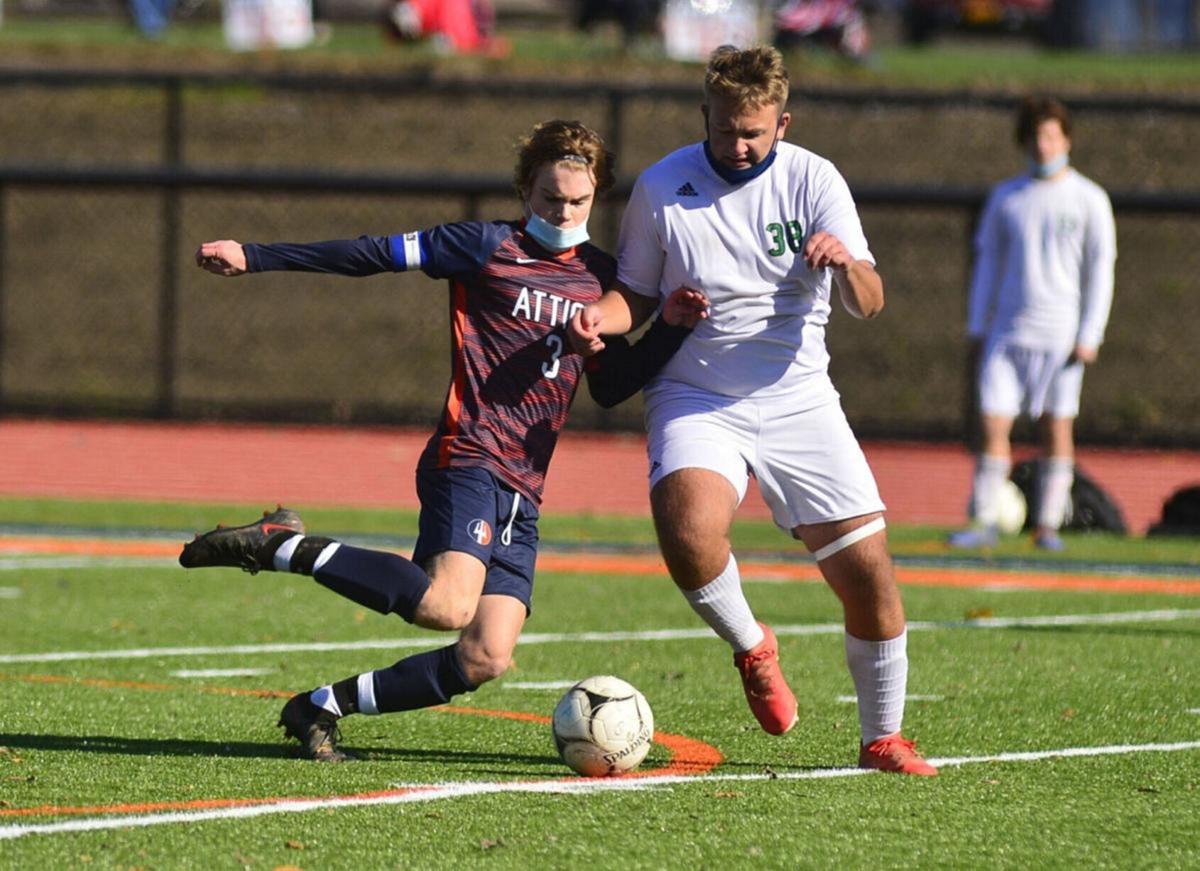 Mark Gutman/Daily News Evan Dickhut, left, picked up an All-Tournament selection in Class B2 this fall.

Mark Gutman/Daily News Evan Dickhut, left, picked up an All-Tournament selection in Class B2 this fall.

The difficult and never-before-seen 2020 Section V boys soccer season wrapped up last week when the section crowned its eight champions for the season that was condensed and modified due to the ongoing COVID-19 pandemic.

While some teams were unable to compete in the sectional tournaments — mainly those from Le Roy and Letchworth/Warsaw — much of the season went off without a hitch. Though no Daily News coverage teams captured sectional blocks this fall, three Livingston Conference teams did walk away with titles as Livonia was crowned in Class B1, Bath-Haverling in Class B2 and Keshequa in Class D1.

After the tournaments wrapped up last Thursday, the coaches and tournament officials tallied the votes and on Sunday they announced the annual all-tournament sections for the boys soccer brackets of 2021.

Here is a look at those local athletes selected:

This season the Batavia Blue Devils put together the program’s best season in recent memory. Batavia finished the year at 7-5-1 and earned the No. 6 seed in the Class B1 tournament. The Blue Devils would go on to top Newark in the quarterfinals before eventually falling to a quality Livonia squad in the semifinals.

A pair of Batavia players would earn all-tournament team honors — senior midfielder Jaziel Childs and junior midfielder Carter Havens would both be honored for their play in the tournament, eventually won by Livonia.

Speaking of champion Livonia, the Bulldogs would go on to have four selections on the all-tournament team in senior Brady Bishop, juniors Bryce Hoang and Shane Melead and sophomore Jackson McEnerney.

In the tournament, Melead had six goals and one assist, McEnerney had three goals and an assist and Hoang had two goals — including the game winner in the title game — with a pair of assists; Bishop had five goals and three assists on the season.

The lone B2 representative was the Genesee Region League’s Attica. The GR champion had its best season in program history and finished at 8-4-2 before falling to Williamson in the quarterfinals.

Junior midfielder Evan Dickhut — the GR Player of the Year with two goals and 14 assists — was named to the 2020 all-tournament team for the Blue Devils.

The tournament was eventually won by powerhouse Bath-Haverling.

Class C1 saw Holley earn the No. 3 seed and advance all the way to the title game before it fell to top-seeded East Rochester.

The Hawks would earn three all-tournament selections in seniors KJ Biedlingmaier, Kayden Servais and Charles Turpyn. In the tournament, Servais would have a goal and an assist and Biedlingmaier had a goal for Holley, which finished it season at 11-4-1.

Upstart Pavilion/York would surprise from the No. 7 seed and advance all the way to the semifinal round, including an upset of top-seeded Avon, and would earn a pair of all-tournament selections in senior Kyle Milligan and junior Quinton Barrett.

Milligan scored the game-winner in the opening round and Barrett led a defense that had a pair of shutouts before falling in a tough one 2-0 to Holley in the semifinals. Pavilion/York finished its season at 8-6-1.

Also in Class C1, Caleb Carson, a junior from Byron-Bergen/Elba, would earn a selection. The Bees finished at 5-10.

Kendall, which finished the 2020 season at 6-9, had a pair of all-tournament selections after the Eagles advanced to the semifinals from the No, 4 seed before falling to champion Naples.

Leading scorer Michael McCue, a junior, had a pair of goals in the tournament for the Eagles with senior Joe Nettles leading the defensive effort to earn a selection.

Pembroke junior Matt Curtis also earned a selection for the Dragons as he had a solid two games with three goals and a pair of assists. The Dragons, who finished at 6-10, earned the No. 5 seed in the tournament.

Geneseo, the No. 7 seed that advanced all the way to the championship game, would feature three players on the all-tournament team in senior Michael Walton and juniors AJ Agosto and Jason Hammond. Walton finished the tournament with the game-winner against Cal-Mum in the quarterfinals. Agosto, a goalkeeper, had three postseason shutouts and allowed just one goal in the final against Naples, while Hammond led the defense in front of him.

Keshequa, the champion of Class D1, had a quartet of all-tournament selections in seniors Aidan Wood, Riley Rease and Hunter Zangerle and junior Reese Powers. In the tournament, Rease had seven goals and an assist, Powers had three goals and six assists and Wood finished with two goals and an assist.

Aaron Lund, a junior from Wheatland-Chili, also earned a selection.