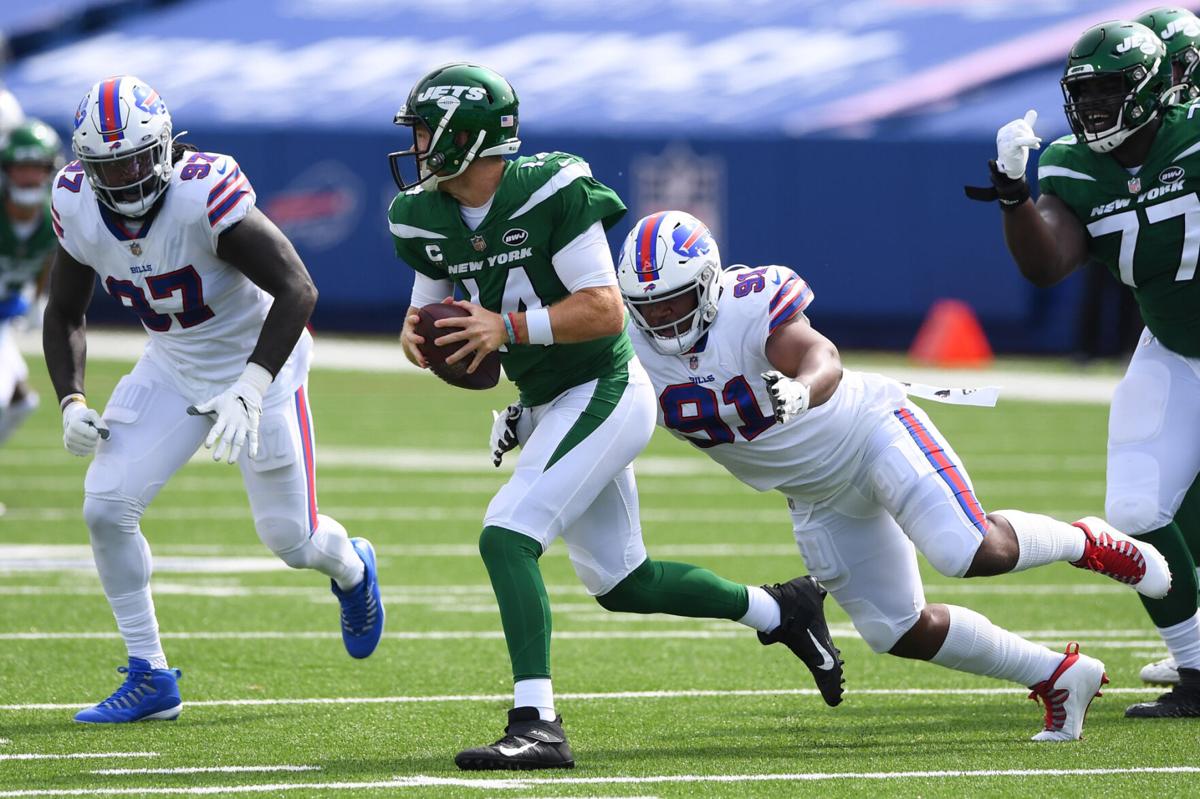 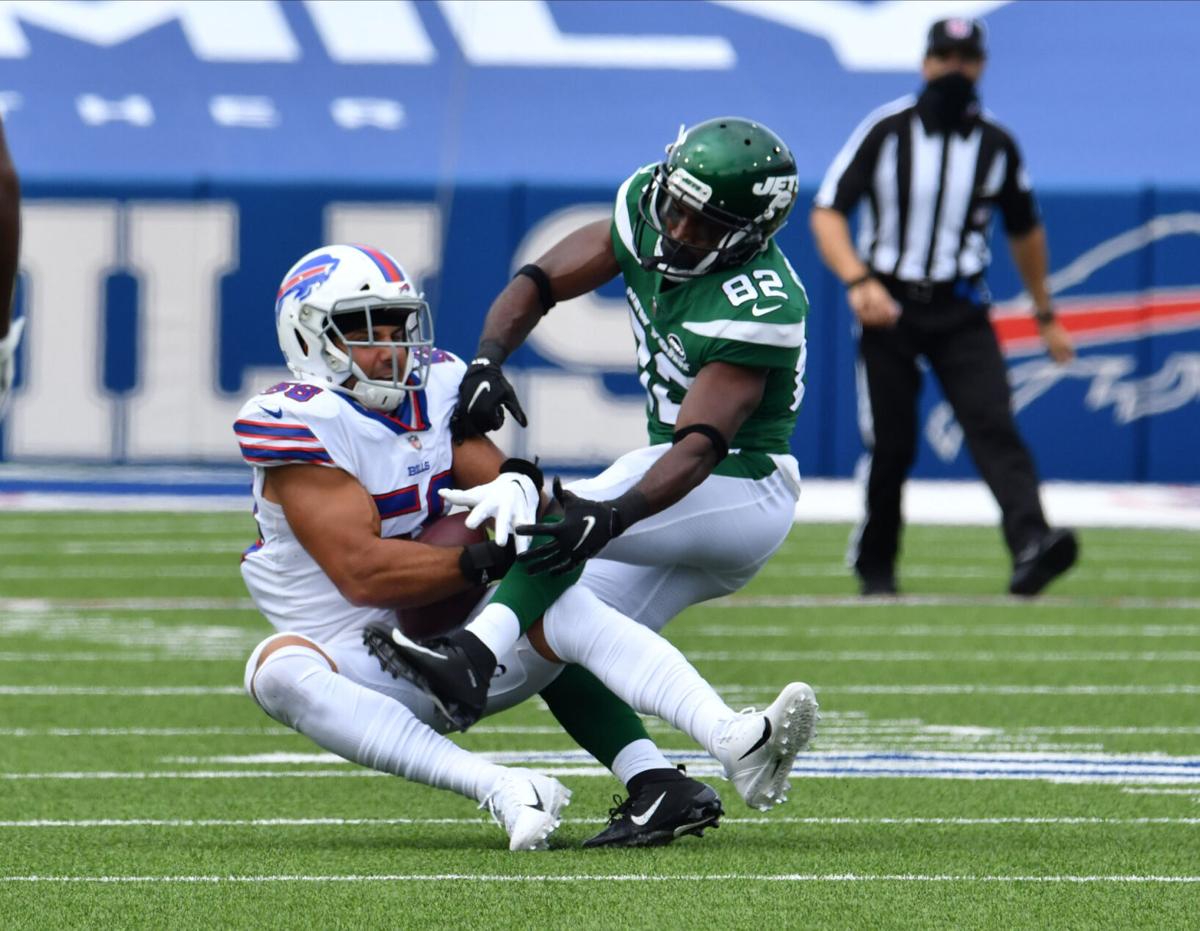 ORCHARD PARK — The way the Bills defense started Sunday’s win over the New York Jets was likely everything defensive coordinator Leslie Frazier could have hoped for.

Stagnant may have been too conservative a word to describe the way that New York began the game offensively. After three-straight three and outs on their first three possessions of the game everything the Jets had likely feared would happen when they took on a stingy Bills defense was playing out right in front of their eyes.

“To come out there and get three consecutive three and outs the way they did under the conditions (of this season),” said Frazier, pleased with his unit’s performance. “You have to be able to lock in and ignore the fact that it’s gonna be different but at the same time your approach has to be firm and has to be right.”

The Bills’ approach was as firm as ever on Sunday, as their defense was strong against the run and held NY to just 52 yards rushing while also putting forth a solid pass rush, which produced two sacks on the day - one from new addition Mario Addison and one from Trent Murphy, who many believed would be cut during the offseason. Buffalo failed to win the turnover battle, but the defense did manage to come away with two takeaways, as Matt Milano’s leaping interception in the second quarter and Jordan Poyer’s strip of Jets’ tight end Chris Herndon gave them two takeaways which led to three points for the Bills and would have likely led to more if it weren’t for Josh Allen’s fumble in the second quarter.

“Our defense got off to a really good start and our offense really kicked it into overdrive,” added Frazier. “They got us a lead and we just needed to settle in and play good football from that point on.”

In total, the Jets managed just 254 total yards, 202 of which came through the passing game, while only managing a 4-of-11 clip on third down. New York possessed the ball for a measly 18:44 and punted or turned the ball over on their first five possessions of the game.

Jets’ third-year quarterback Sam Darnold, who many, before the game believed to be on the same career trajectory as the Bills’ Allen, looked like a rookie all over again against the Buffalo defense. Darnold began the game 1-of-7 passing for no yards on his team’s first four drives until he finally began to find some sort of rapport with wide receiver Jamison Crowder, who caught Darnold’s lone touchdown pass, a 69-yarder which came on a busted play in which the Bills missed a couple of tackles on Crowder’s way to the end zone.

Frazier cited the Bills’ steady pass rush as a major factor that played into Darnold’s struggles.

“Under the circumstances, without having a preseason and really the only work we had being against our offense, I thought the guys did a good job,” said Frazier. “It wasn’t an easy environment to be in from a standpoint of when you’re at home you feed off the energy of the fans. Our guys didn’t seem to allow that to take away from their play.”

For the Bills, along with the contributions made by Addison and Murphy who each grabbed their first sack of the season, another standout within the Bills’ defensive line rotation was reserve defensive tackle Justin Zimmer, who basically shut down the Jets’ second drive of the game singlehandedly. On the Jets’ second possession, Zimmer recorded a run stop and a tackle for loss which helped force a three and out.

At times, the Bills were making wholesale changes along the line of scrimmage, bringing in an entire set of defensive lineman for a given series, which is something that the gameplan, as well as gameflow, dictated on Sunday, said Bills’ head coach Sean McDermott.

“Philosophically that’s a little bit of what we believe in there,” said McDermott after the win over the Jets. “It’s a combination of that and also just some of the three and outs, combined with our offense staying on the field with multiple play drives, and then their no-huddle at times too.”

Along with the solid play upfront, another bright spot for the Bills was the play in the secondary, namely cornerback Levi Wallace who earned the start after fellow corner Josh Norman, who was in competition with Wallace for starters reps, bowed out of the competition for the number two cornerback job with an injury which landed him on injured reserve for the Bills’ first three games of the regular season. In the Bills’ win on Sunday, Wallace played 100 percent of the defensive snaps and recorded two tackles and a tackle for loss while providing some great coverage along the outside.

Bills’ nickle cornerback Taron Johnson also looked good and led the Bills with five tackles while remaining healthy, which is a key for a player who has missed plenty of time due to injury in the past.

“Taron played an excellent game for us,” said Frazier. “He was covering probably their top target for sure and the fact that he was able to consistently stay in coverage and make plays on the ball the way he did, that had a lot to do with our success on third down.”

On the other side of the coin, one cause for concern for the Bills’ defense against the Jets was the departure of starting linebackers Matt Milano (hamstring) and Tremaine Edmunds (shoulder), who each left the game on Sunday and did not return. With that said, neither injury is expected to be long-term.

Edmunds’ injury came on the Crowder touchdown, a play that McDermott described as one that Edmunds and the Bills wanted back.

“It was a play that we would all like back, Tremaine included. At the end of the day we have to make that tackle,” said McDermott about Crowder escaping two or three Bills’ tacklers on his way to the long catch and run that reached paydirt. “It just looked like he came down on the shoulder a little bit there.”

Milano’s injury occurred during the second quarter and forced him out of the game before halftime.

Neither Edmunds nor Milano returned to the game after exiting, but Bills’ backup linebacker A.J. Klein and Tyrel Dodson played well in their stead, with Dodson even coming away with a sack of Darnold.

“I think the guys stepped in for them and played well overall,” said McDermott of Klein, Dodson, and others. “It’s next man up as it relates to the injuries and that’s what we expect if that’s, in fact, the case.”

“You count on the guys who step in to really not have a big drop off,” added Frazier. “That’s why they’re on the roster - so you can expect that to happen...it encourages you going forward.”

As well as Klein, Dodson, and others played in replacement of Edmunds and Milano, it is vital to get both back on the field, said Frazier.

“They both have been outstanding for us and they both are leaders for our defense and excellent players as well,” said the Bills’ DC. “You would like to keep both of them on the field and then yesterday to be out there without either of them, it was tough for a moment. But fortunately, it sounds as if they’re both going to be back, hopefully for this ball game.”

One side note, Bills’ rookie defensive end A.J. Epenesa was inactive for Sunday’s game and was determined to be a healthy scratch. Contributing to his inactive status on Sunday says Frazier was the lack of live-action that Epenesa and other rookies around the league saw during the preseason due to the restrictions that were put in place due to COVID-19.

“He has done a really good job in practice and is really coming along,” said Frazier about Epenesa. “That’s the decision we made for this ball game but we will see what happens going forward.”

There wasn’t much negative to say about the Bills’ defense after week one and another favorable matchup awaits them in Week 2, the Miami Dolphins who were just held under 300 total yards of offense and committed three turnovers against the New England Patriots.

Look for this unit to continue to define itself as one of, if not the best in football.