Sign Up
Log In
Purchase a Subscription
You are the owner of this article.
Edit Article Add New Article
You have permission to edit this article.
Edit
Home
News
Sports
Obituaries
Opinion
Arts & Life
Calendar
Photo and Video
Ads
eEdition
More
Share This
1 of 6 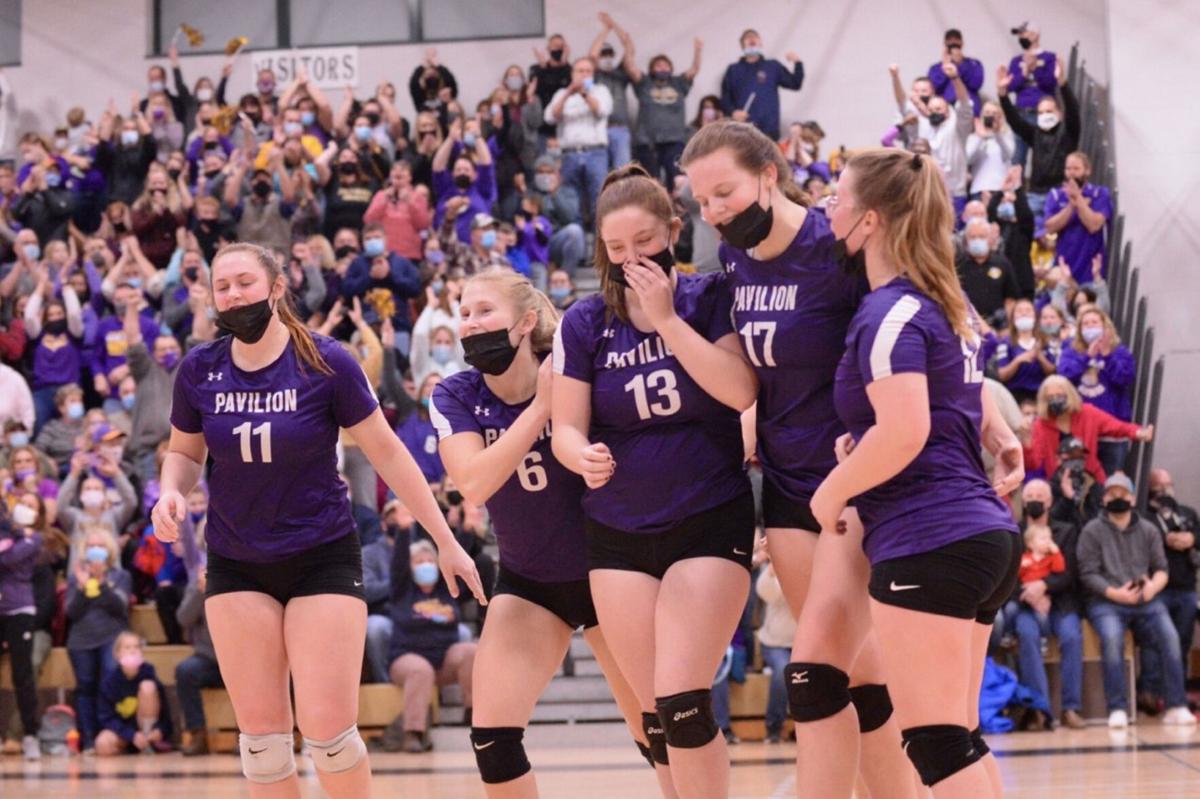 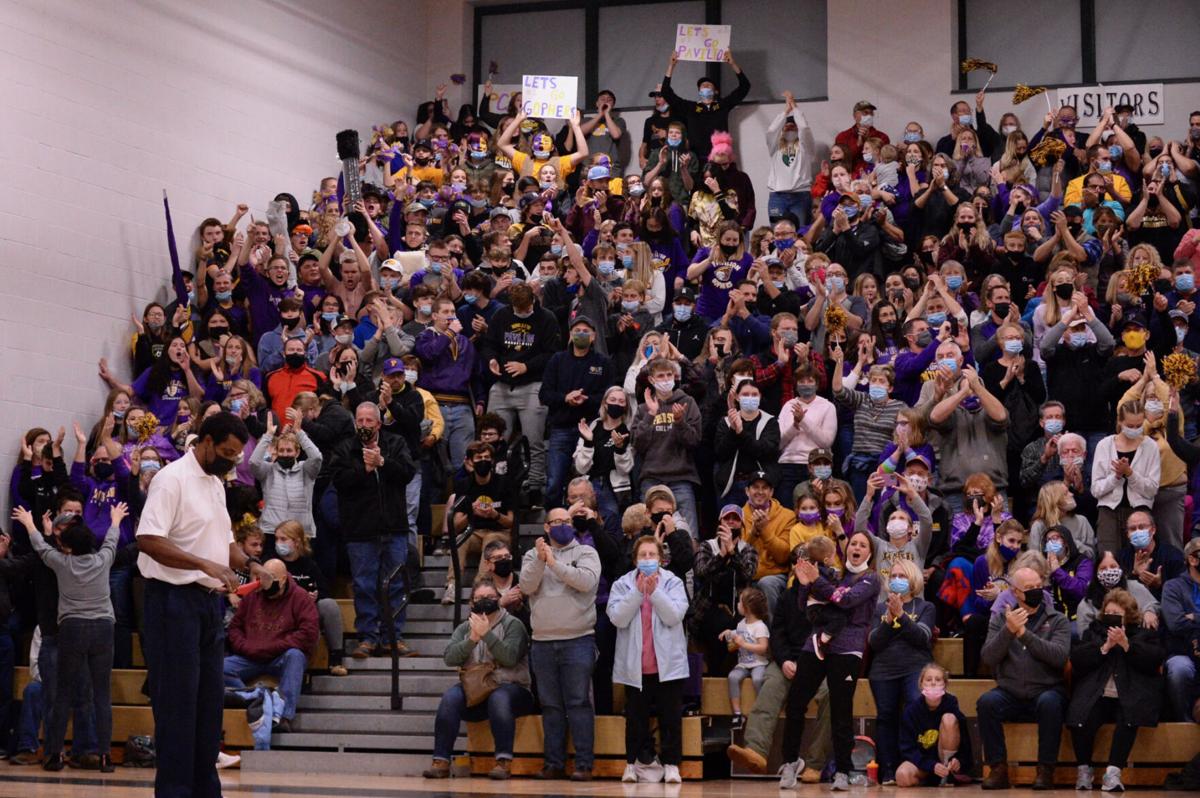 Alex Brasky/Batavia Daily News | A large crowd was in attendance to watch Pavilion win this weekend. 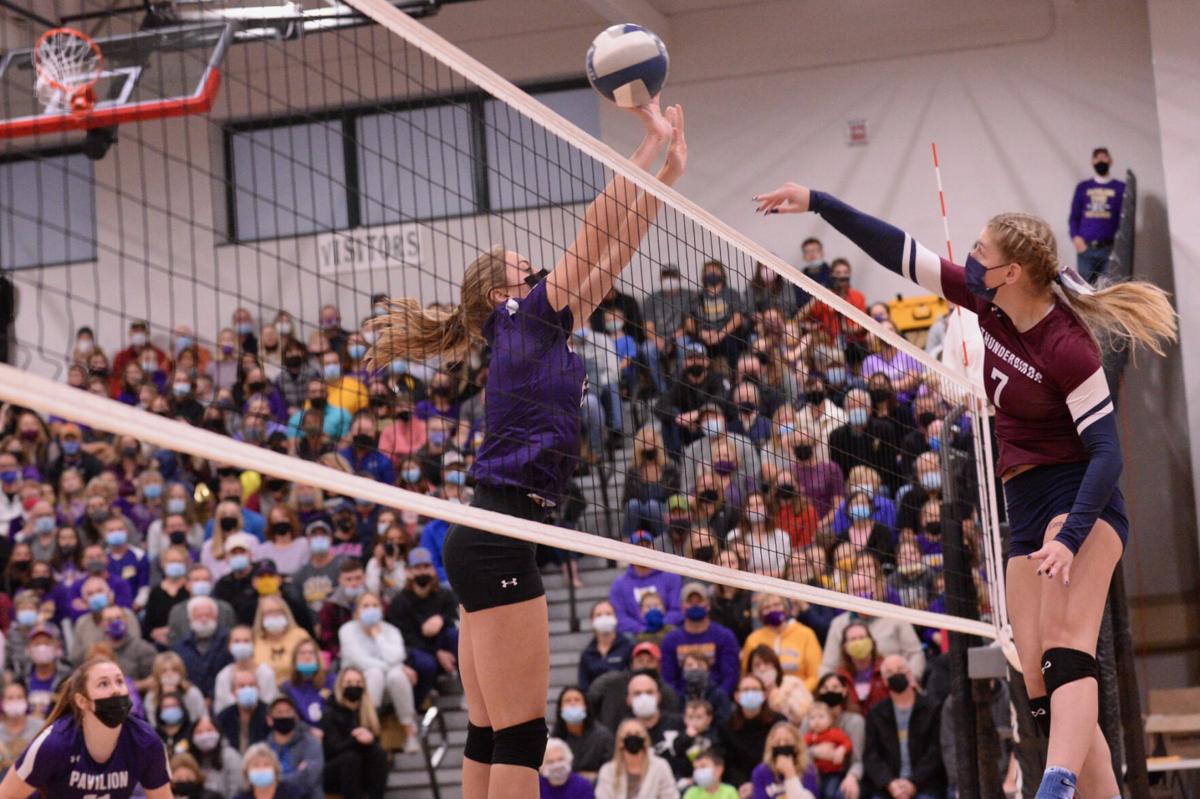 Alex Brasky/Batavia Daily News | Shea Amberger jumps for the block. Pavilion will have the size advantage at the net this weekend. 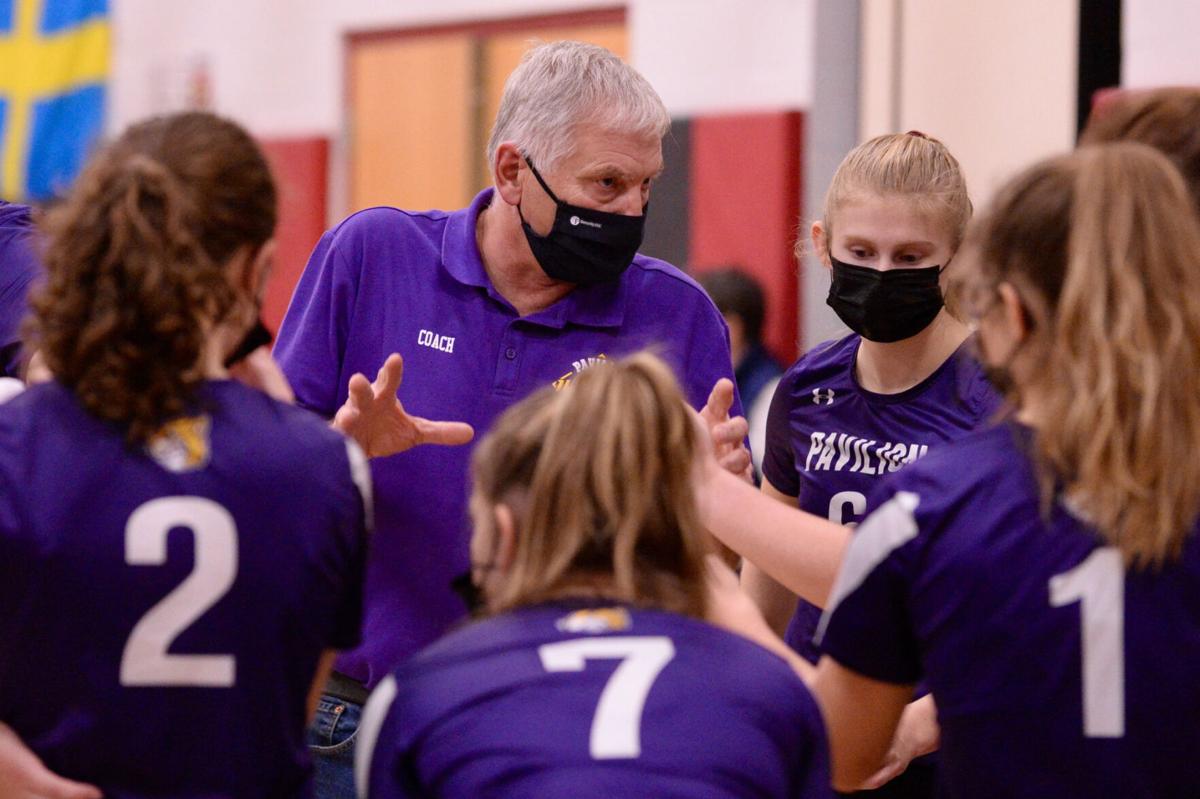 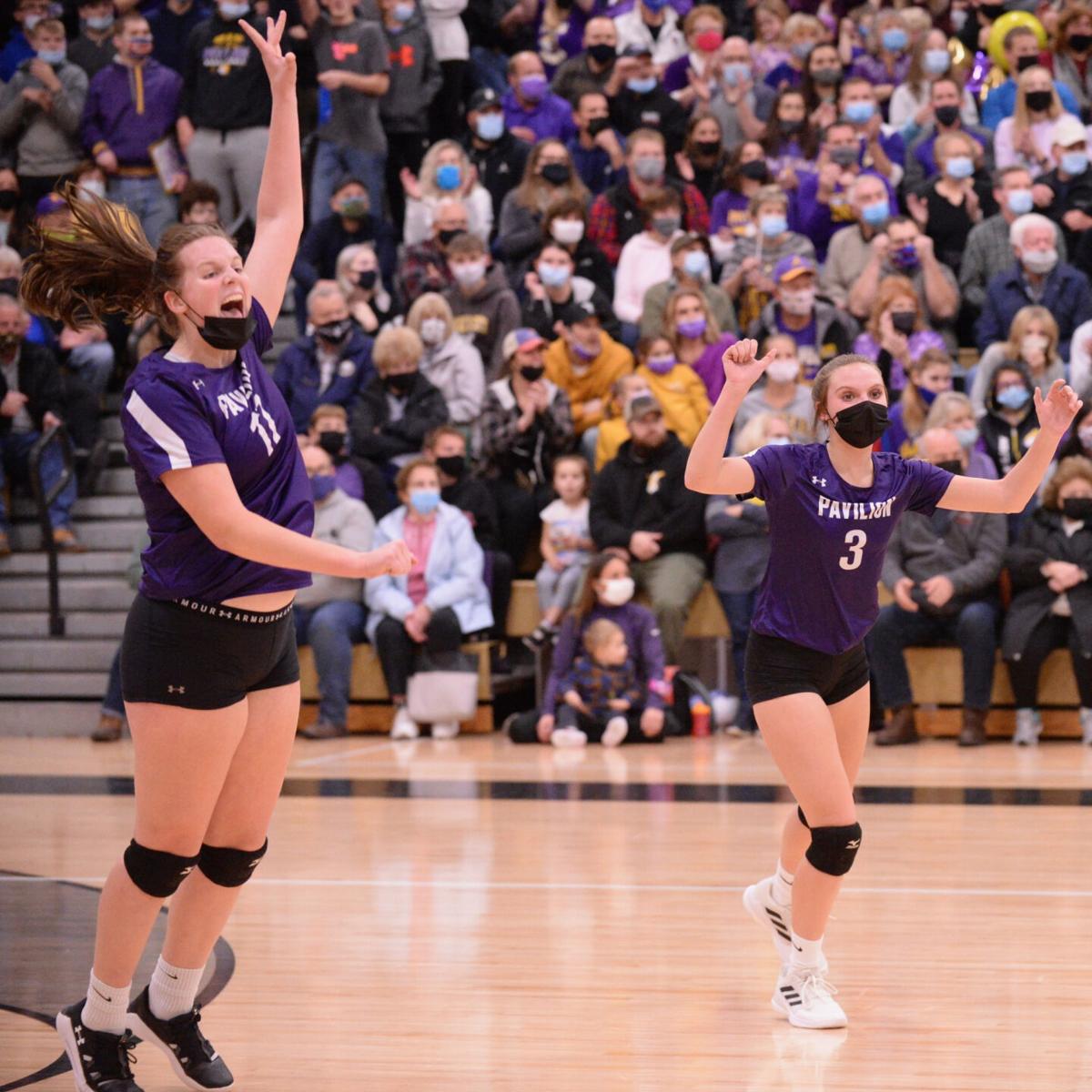 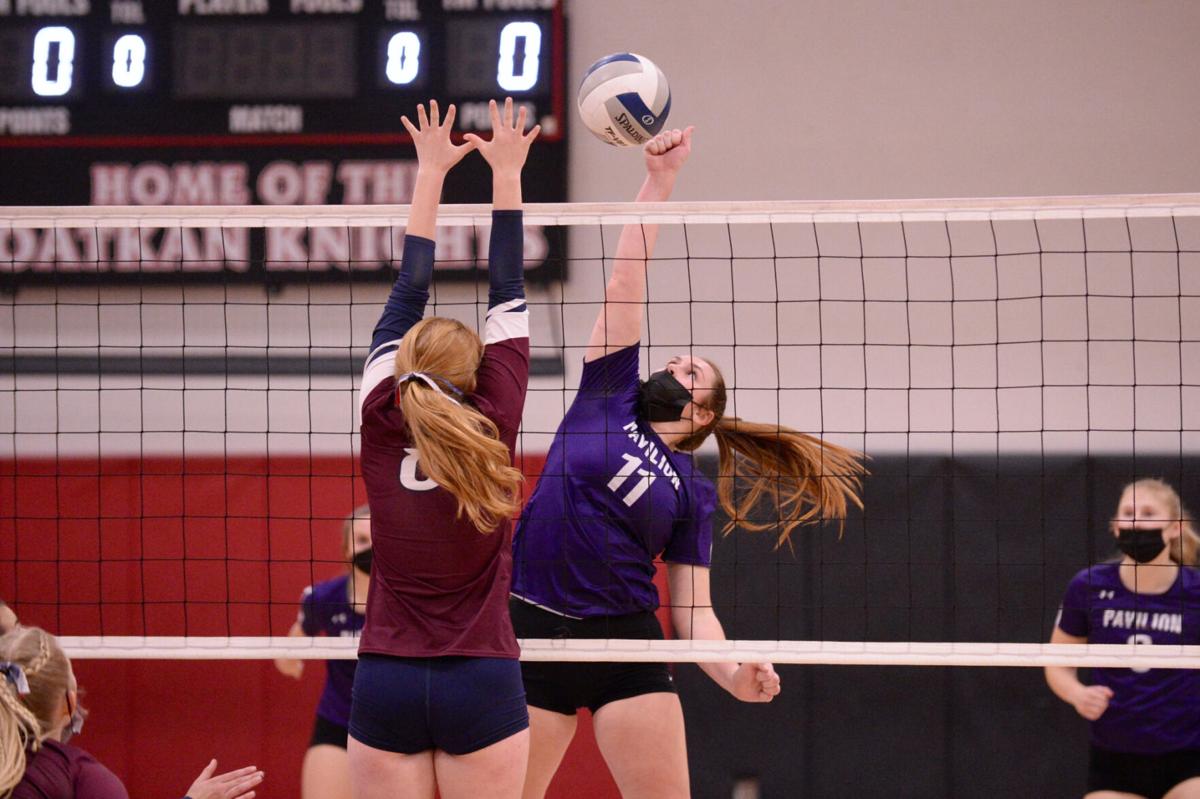 Alex Brasky/Batavia Daily News | A large crowd was in attendance to watch Pavilion win this weekend.

Alex Brasky/Batavia Daily News | Shea Amberger jumps for the block. Pavilion will have the size advantage at the net this weekend.

Since March, when the 2020 fall season was moved to the spring, the Pavilion girls volleyball team has been the most dominant team in the GLOW region and perhaps all of Section V — maybe even New York State.

It’s been two seasons, nearly eight months and over 200 days since the Pavilion ladies last dropped a set. This weekend, the two-time Section V champion Golden Gophers hope to further their streak at the NYSPHSAA championships in Glens Falls.

Pavilion (24-0) remains unbeaten heading into the state tournament, where it will meet the Candor Indians (23-2) in the opening round-robin on Saturday at 3 p.m. Candor is the defending NYSPHSAA Class D champion, dating back to the 2019 season.

Following their matchup with the Indians (Sec. IV), the Golden Gophers will meet up with the Galway Eagles (34-7-7) and Mount Academy Eagles (30-4), of Sec. IV and Sec. IX respectively. Galway, Mount Academy and Pavilion have never won state championships.

In the round-robin, each team will play one another in a two-set match with the two teams that earn the highest set scores over three matchups advancing to the NYSPHSAA championship. Pavilion hopes to punch its ticket to the state final to be played Sunday at 2 p.m. at Cool Insuring Arena in Glens Falls. It would be the Golden Gophers’ first appearance in the title game since 1998.

Pavilion was last defeated on March 26 of the spring season, falling in straight sets to Livingston County foe, Perry. Since then, head coach Rex Eighmey’s bunch has recorded a set score of 111-0 through 37 matches - which is believed to be the longest unbeaten set streak in Section V history.

This weekend, Pavilion will be on the cusp of recording more history, as it is now just a few wins away from the program’s first-ever state championship. The Golden Gophers have won the Far West Regional game three times before, most recently in 1998, and back-to-back victories in ‘88 and ‘89.

After last season’s state championships were canceled due to the COVID-19 pandemic, Pavilion is relishing the opportunity to cap off what’s been an unforgettable season with more postseason hardware.

“It’s amazing that we finally get the chance to do what we weren’t able to last year,” said Pavilion senior Adeline Milligan. “We can finally show how competitive we are and how well we can play together. “

Pavilion’s core-four of Milligan, fellow senior Shannon Campbell, and juniors Karlee Zinkievich and Lauren Kingsley have each been on the varsity team for the past four seasons, developing a level of chemistry that is unmatched. The experienced group hopes that chemistry serves them well this weekend, which they hope to finish as champions.

“When we’re down, we all stick together, and we don’t get down on each other,” said Kingsley. “We make sure that we’re all there for each other.”

Of the Gophers’ core-four, Kingsley is the most intimidating, standing 6-foot-1 and carrying with her a fierce swagger that has helped the junior record a team-high 236 kills and 43.5 blocks this season. She’s also third on the team with 92 digs and has recorded a serve rate of 86%.

“I think it’s a really good advantage,” said Kingsley of her height. “Especially because we always say that they’re ‘scared’ of us. Sometimes they just can’t get the ball around us, so it really helps.”

Joining Kingsley on the front line is 5-foot-11 senior Shea Amberger, who is second on the team with 15 bocks.

“I love walking into the gym because (we’re) always like the tallest ones,” said Kingsley. “Then they’re always kind of scared. Then on the court when they see us warming up (it’s intimidating).”

Coupled with its great size is Pavilion’s supreme speed and athleticism. Between Zinkiviech, Milligan, Campbell and a few others that rotate in, the Golden Gophers’ ability to cover the court has been impressive the past number of years.

“Coach always says attack, attack, attack,” said Zinkievich, one of Pavilion’s many multi-sport athletes. “I think being quick and being able to get to the ball has helped save a lot this season.”

Milligan leads Pavilion with 158 digs this season, while Zinkievich is right behind her with 155.

Zinkievich’s serve rate of 94% leads the team, as do her 353 points and 115 aces, while Milligan’s 230 kills place her just behind Kingsley, who holds the team lead. Campbell has been the top helper for the Gophers, as she enters the NYSPHSAA championships with 546 assists on the season to go with a 92% serve rate. Junior Paige Landers and senior Sara Laurie have each recorded over 100 points for Pavilion this year.

Nearing his 20th season as head coach at Pavilion, Eighmey has never seen a team like he has this year. With the combination of depth, experience and talent, he believes this group has what it takes to go all the way.

“They’re very competitive players — all of them are, the whole team,” said Eighmey. “So that competitiveness comes out when they really need it. They can step it up if we do get behind or get in close. They are really competitive, and they go for it. They really step themselves up when they need to.”

Along with their talent on the court, Pavilion is blessed with a talented coaching staff on the sideline, including Gophers JV coach Betty Worthington and varsity assistant Rebecca Zinkievich. Worthington, Zinkievich and Eighmey’s assistance has helped Pavilion reach its full potential.

“Betty Worthington does a great job with the JVs,” said Eighmey. “A lot of these girls played with her for a little while. She’s got a lot of enthusiasm. And Rebecca Zinkievich is top-notch, the best. She is a huge part of the success (we’ve had). She does a lot of the coaching — actually, almost all of the coaching this year. She’s fantastic. She runs our practices, keeps the team pumped up, and she’s a huge, huge part.”

Another factor in Pavilion’s successful run this season has been the return of ‘Gopher Pride’ to the hallways and streets in Pavilion. This past weekend, Gophers fans packed the stands at Le Roy High School to take in their team’s three-set win over Chautauqua Lake in the FWR.

“As we’ve moved along through each sectional game, each game later in the season, more and more people come out,” said Eighmey. “People I haven’t seen, friends that I haven’t seen in years. The stands are full, and it makes it almost like football - like the 12th man. This is our seventh person on the court.”

Campbell added: “Sometimes at our school, it’s hard (to generate school spirit). We didn’t have homecoming this year, COVID was really hard. So the students and parents and community being able to get together at those games has been really special and also helped us get through those games.”

This weekend, it will be a challenge for the Gophers faithful to come out and support their team. The trip from Pavilion to Glens Falls measures over 260 miles, which amounts to more than a four-hour car ride, five by bus.

Despite the long-distance, Eighmey is confident a strong contingent of Gophers fans will make the trip and create a quality atmosphere for his girls.

“I think there’s going to be a lot of people in Glens Falls to support the team,” said the Pavilion head coach.

Upon arrival at Cool Insuring Arena, the Gophers will take on the Candor Indians, which swept their way past the Lafayette Lancers (Sec. III) in their regional matchup.

Pavilion will have the size advantage over Candor, as Kingsley and Amberger will tower over the Indians’ top-blocker, senior Shelby Swartz, who stands just 5-foot-8. Despite her lesser size, Swartz will be a force to contend with this weekend, as her jumping ability allows her to play above her listed height. Swartz leads Candor with 245 kills and 68 aces on the year. Swartz’s 90% serve rate is fourth-best on the team, while senior Addie Aman is Candor’s top server, recording a serve rate of 96%.

Pavilion must do their best to keep the ball away from Swartz, Aman and fellow senior Brooke Wilcox, who is third on the team with 115 digs. Aman leads the team with 142 digs, while Swartz has recorded 124 digs this season.

“I don’t really know too much about the teams,” said Campbell. “They’re kind of hiding their tapes. So I can’t really find them. But I know that they’re good, so we have to play our best for sure.”

With so much riding on this weekend — both the state championship and the continuation of an unprecedented set streak — the Gophers are feeling the pressure. But don’t expect that to deter them from reaching their ultimate goal.

“I want to win states,” said Campbell. “I think we have the ability to, so I really want to give it my all. I want that state banner.”

For Pavilion’s group of eight seniors, a win this weekend would mean everything.

“Leaving with a victory would be so good because it’s all we have all dreamed of,” said Milligan. “And my last year, being able to finally accomplish it — that would be the best.”

Pavilion is the only small school from Sec. V that will participate in this weekend’s NYSPHSAA championships, as the Golden Gophers will be joined by Sec. V’s Victor Blue Devils (Class AA) as the two Rochester-area schools that will compete for a championship this weekend.