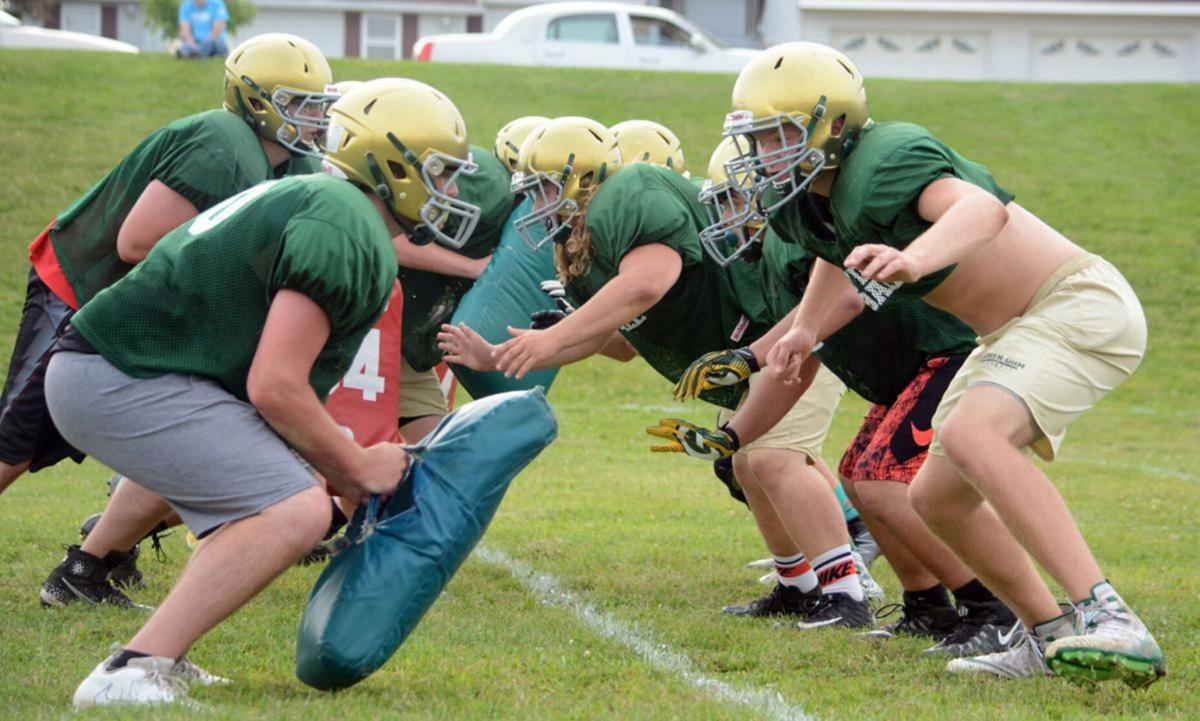 Provided With Maryland, Minnesota and Michigan recently reversing course and playing football this fall, the total is up near 40 states back on the field.

Provided With Maryland, Minnesota and Michigan recently reversing course and playing football this fall, the total is up near 40 states back on the field.

The text came to me early last week.

It was from New York State Public High School Athletic Association Executive Director Robert Zayas, asking for a time that we can talk.

He had obviously seen the column I wrote last week blaming both him and Governor Cuomo for “dropping the ball” on our high school football programs not being allowed to play this year. I was tough on the decision for no football, and I felt I had to be.

I offer no apologies on that column and I feel just as strongly today as I did when I wrote it.

Zayas’ text came only a few minutes before Scott Barker, the head of Section V football, had sent one himself. He was also looking for some insight on who wrote it.

Obviously, I knew our state and sectional officials were not going to love me bashing them. I knew that long before I hit the “publish” button.

After all, someone in this area, besides ND coach Joe Zambito, needed to advocate for these football, volleyball and cheerleaders who were somehow being put on the back burner while other sports were starting up.

I felt like sticking my neck out was my way of supporting the kids, the coaches and the parents of these football players — and especially all the seniors that were being robbed of their final fall sports season.

I also knew I was not going to get many (if any) coaches or administrators to talk publicly about their disappointment with the decision to cancel high school football. Many of these coaches and administrators have families to feed and for them to say what I know they wanted to say about the situation would put them in jeopardy.

Meanwhile a coach like Zambito, of the defending sectional champion Fighting Irish, who has voiced his displeasure since day one on no football, does not teach at the school so he can come out and say what he wants — which he has done so day in and day out. I definitely respect that.

However, he’s on a small island because most everyone else that has talked with me “off the record,” just can’t advocate publicly because of their job situation. And I totally understand.

Zayas and I spoke for almost an hour, which I really appreciated him giving me all that time with everything that man has on his plate right now. Prior to our conversation, he was on a two-hour conference call, most likely with other state directors who are also making key decisions for their student-athletes.

On an average day, Zayas says he gets over 200 emails. He’s a very busy guy and his time is extremely valuable.

The one thing with ‘Doc’ Zayas I would like everyone to know about him is just how transparent he is.

He doesn’t run away and hide in the corner when he makes a tough decision that he knows might not be popular, instead he faces the music whether good or bad. He’s right there doing what he feels is in the best interests of our student-athletes.

He’s always been that way, he’s a great communicator for the NYSPHSAA.

My column last week wasn’t personal, and he knows that. At least I hope he does.

But with that being said, these kids in upstate NY should be playing high school football. And quite honestly, they should be looking forward to week six coming up and getting ready for the sectional tournament in a few weeks.

While I was out driving around this past Saturday afternoon, a gorgeous sunny day, I couldn’t help but think about all the homecoming football games that didn’t happen. All the homecoming festivities that were sacrificed despite our state having the lowest infection rate of all the states that decided to play football.

The weather here in upstate NY has been picture perfect the past six weeks which certainly throws salt on the wound with no football. I don’t remember us having a better weather-related summer/fall than the one we’ve had this year.

Just recently, Maryland, Minnesota and Michigan have all decided to play football this fall making the total amount of states near 40 that are, or will be, playing high school football before the 2020 calendar ends.

In Maryland last Thursday, state superintendent Karen Salmon and Governor Hogan “have reversed course” on their initial decision of no football and instead have notified programs they can start back up Oct. 7.

College football conferences like the Big 10, Pac-12, MAC and Mountain West — who all opted out back in September — have reversed their decisions and will start playing football again.

As much as I wish Cuomo’s office would call Zayas to open high school football back up in NY, we all know that is just not going to happen so why even go there. That phone call should have been made in early September at the latest. Cuomo is probably shaking his head right about now wondering where all the positive tests are. Not here.

I literally can’t stand how upstate NY is always thrown in with downstate. Look at the geographics. We are way closer to Cleveland, OH than we are NYC, yet this state seems to do whatever our governor decides as a whole. Totally insane.

Unfortunately, here in NY where the snow will fall in the next month or so, we are being forced to wait until March 1, 2021. I pray that happens, but have my serious doubts.

We blew our chance for a gorgeous fall football season.

Anyway back to my conversation with Zayas.

During our talk he mentioned a lot about the Department of Health and their concerns and that his hands are tied in regards to any decision that was in direct conflict with what the DOH recommend. He mentioned that the DOH has classified football, volleyball and cheerleading as “high risk sports.”

“I want to make sure right away that people understand awe are abiding by the Department of Health,” Zayas told me. “We are relying on those experts to make those decisions and then we’re obligated to abide by that guidance.”

When we spoke, I wanted to let he and his staff know that I also like to consider myself transparent, with all my cards facing up.

And with that said, I informed him that I would relay everything he said about why high school football was postponed to our readers, who are all extremely loyal to our student-athletes, and deservedly so. They deserve an answer.

So, I sent him five questions because I wanted to get his responses word for word.

Here were his responses to those question....

Could each individual section have gone on their own to play football this fall if the data supported it? Obviously Section V would probably have lower infection numbers than say Sec. I or Section 9 so I was wondering if there was any talk, just for this fall, if football could have done something on their own? With no NYS championships in the fall I was wondering if there was any thought by each individual section doing their own thing?

Zayas: “Each section has the authority to determine when seasons will be held in accordance with the NYSPHSAA Handbook rule -29. It is important to note however the New York State Department of Health (NYSDOH) has determined football to be a high risk sport and in accordance with the NYSDOH, was limited to practice only this fall. No timeline was provided as to when high risk sports may be able to participate in games. State officials plan to reevaluate high risk sports prior to December 31st.”

What specifically were your guidelines for having fall sports start Sept. 21?

Zayas: “September 21st was the date provided by state officials for the start of interscholastic athletics this fall. We also wanted to provide schools with amble time to focus on getting students back into “school” before having to address athletics.”

You stated that your membership had several concerns with football possibly coming back this fall? Can you provide me what some of those concerns were and if any of those superintendents were from Section V?

Zayas: “After receiving authorization from state officials to start interscholastic athletics on August 24th, the New York State Council of School Superintendents requested that Governor Cuomo reconsider his decision to permit athletics to begin on September 21st. On September 8th and 9th I scheduled eight zoom meetings with athletic administrators throughout the state to answer questions and address concerns related to the start of interscholastic athletics this fall. After speaking with nearly 500 athletic directors, I identified there were a lot of concerns with high risk sports having the opportunity practice with no indication if they would be permitted to play this fall. There were also concerns with face coverings, screening protocol, locker rooms, weight rooms, practice limitations, equipment sanitation, etc. Adjusting the seasons for high risk fall sports will provide students with a “better” opportunity to have a season where games can be part of their participation experience.”

Obviously this has been very hard on you and your staff with no right answer for everyone with their own beliefs and opinions. What can you tell us about you and your NYSPHSAA staff and the job they have done during all of this craziness?

Zayas: “First, I would like to commend school administrators throughout the state for their dedicated efforts focused on getting students back into a beneficial learning environment. As an athletic association we have worked closely with state officials, school administrators and the 11 Section Executive Directors to provide guidance and assistance to our member schools. Similar to the job of a school administrator, we as a staff, are dealing with new challenges every day. I am trying to base decisions on readily available information and avoid predicting too far into the future.”

Can you be specific on what the expectations will be with kids wearing masks and face coverings in soccer and cross-country this fall? And would it have been possible for football/volleyball players to all wear masks during the fall season?

Zayas: “The face covering topic is being widely discussed. The New York State Department of Health (NYSDOH) requires that when six feet social distance cannot be maintained, a face covering must be worn, unless a student cannot tolerate a face covering during physical activity. Any action to make NYSDOH guidance more restrictive would be an individual school district decision without endorsement or support from the New York State Public High School Athletic Association. I am advising school districts that questions pertaining to the interpretation of NYSDOH guidance should be directed to local and state department of health representatives.”

Ok, so I want to thank Robert Zayas and his transparency once again for educating our readers on why we are not playing football, volleyball and competitive cheerleading in NYS and especially Section V this fall.

I have one final question for NYSPHSAA, Zayas, and Governor Cuomo...

Why are we not playing football again?

— Chris Metcalf is the regional sports editor for the Batavia Daily News and LCN.