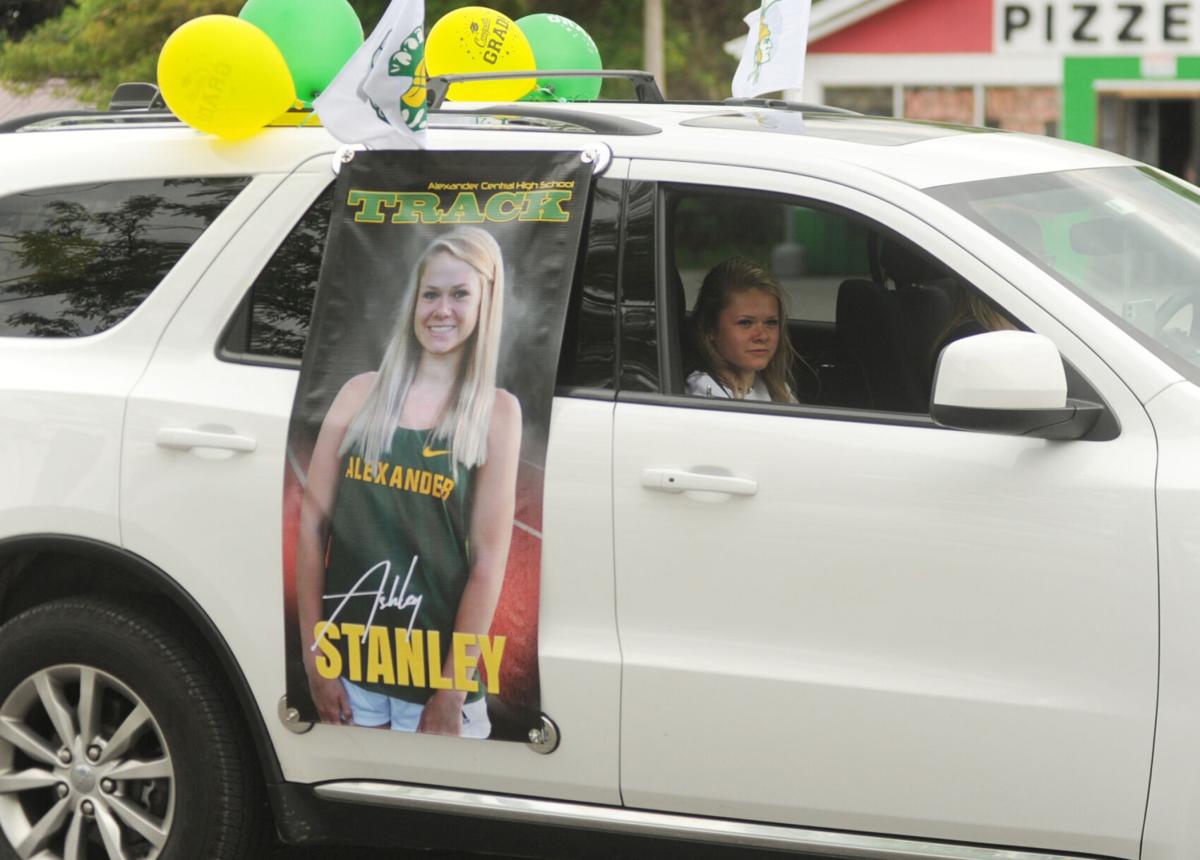 Mark Gutman/Daily NewsThere was plenty of Trojan spirit to go around during Tuesday’s parade including Alexander track and field ‘s Ashley Stanley. 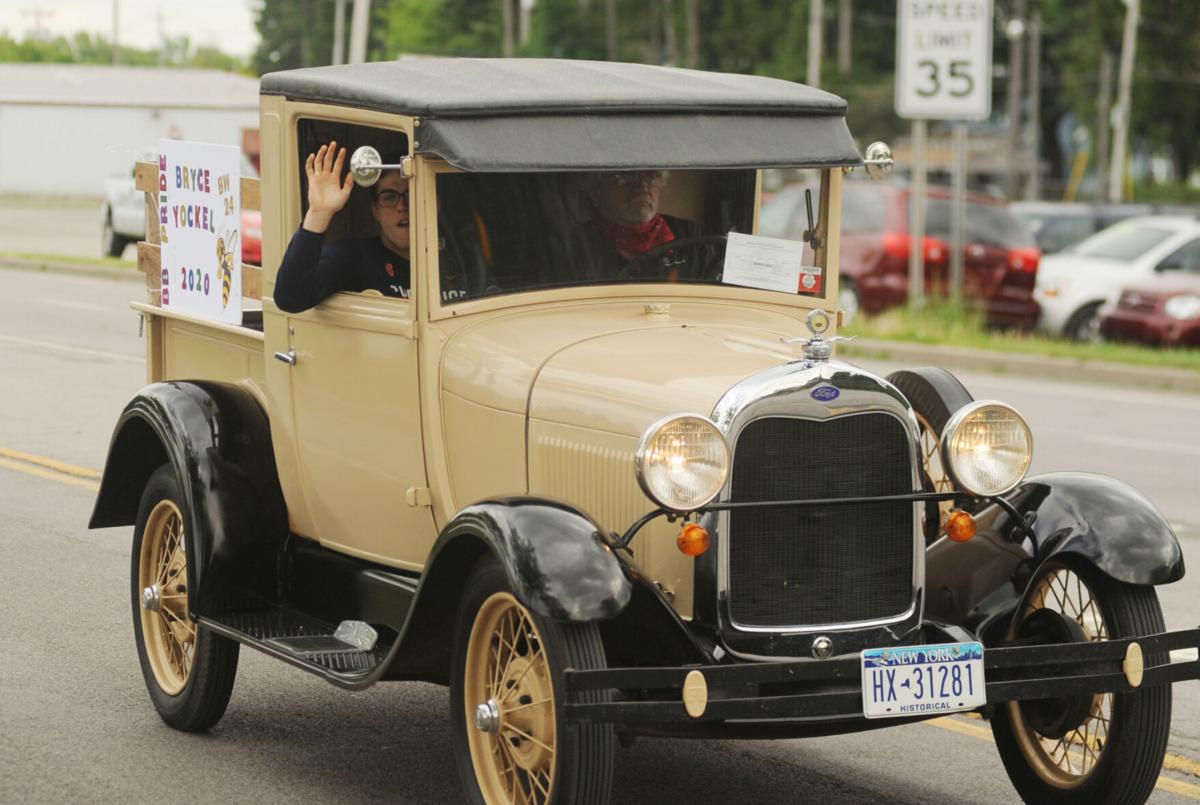 Mark Gutman/Daily News Bryce Yockel in an Antique Ford in the Parade on Tuesday evening.

Mark Gutman/Daily NewsThere was plenty of Trojan spirit to go around during Tuesday’s parade including Alexander track and field ‘s Ashley Stanley.

Mark Gutman/Daily News Bryce Yockel in an Antique Ford in the Parade on Tuesday evening.

Tuesday’s senior spring athletes’ parade was a huge hit. Many of the kids in attendance finally got some closure on what has been a difficult finish to their high school athletic careers.

I left the K-Mart parking lot after the parade had left town with a ‘Proud to be a part of the GR feeling.’

There was definitely something special in the air.

Byron-Bergen AD Rich Hannan deserves a lot of the credit for making it happen, and quite honestly, it could not have gone any better with a large turnout and excellent weather.

Hannan was very appreciative to our local police agencies for all they did for the special event that honored our local senior spring athletes.

He shared this letter with The Daily News and his GR AD’s.

“On behalf of the Genesee Region Athletic Association and area athletic directors; I would like to say thank you and please share our thanks with your entire department. I have copied in all of the area athletic directors and I can honestly say that last night was a fantastic event for our entire community. The kids and adults alike had a great time. It was safe and well executed by your staff. I personally appreciate the help from deputy Rich Schildwaster as well as his organizing with the city of Batavia PD.

Together, we all provided a fun and safe event for the county. This is who we are, and just one small example of what we can accomplish. I realize that this was just a small portion of your otherwise busy day, but it had a big impact on the kids and families all over the county. I had tons of positive feedback!”

I was very proud of the seniors that attended this event. Some of these seniors probably had every right to blow off this particular parade because the parade they had envisioned — the parade they had worked their entire sports careers for — was the one that involved a fire truck escort home after winning sectionals.

That’s every high school athletes’ dream, winning a block of wood and getting the escort back to town.

That didn’t happen this spring.

But the student-athletes that showed up wearing their school colors Tuesday fully understood the meaning of school pride and school spirit and quite honestly I get choked up just thinking about the character those kids all showed that night.

Several of Tuesday night’s student-athletes were destined to win a bunch of sectional patches this spring with many more looking to make that state podium. We even had a potential state champ or two in the social distancing crowd on hand.

It wasn’t meant to be.

However, nobody was pointing the finger Tuesday night. Sure, they were ALL very disappointed that their dream was pretty much stolen away from them by this virus, but Tuesday night wasn’t about what they didn’t get the opportunity to win. Instead it was about spending time with their parents, coaches, classmates and teammates and also waving to their friends from other districts, the same people they had been competing against for years. I was so proud to be a part of that event, and the feel-good student-athletes that represented themselves and their community with tremendous school spirit and pride.

This group of 2020 seniors are beyond special. They are tough as nails and they persevered through one of the most difficult times imaginable.

Teachers and coaches preach all the time to these kids that there’s a bigger picture than winning championships and earning blocks. We saw that on full display at the parking lot in Batavia Tuesday...

If I were handing out awards, the top decorators would go to ‘Team Alexander’ for their incredible vehicle decorations and Trojan spirit with several vehicles and athletes in the parade, although Attica, Batavia, Byron-Bergen. Holley, Notre Dame, Pavilion and Pembroke would all place a close second.

There’s no doubt that we all learned something at this parade.

I know that I learned several valuable lessons including appreciating all you have because you never know when that might be taken away.

I also learned just how resilient and full of pride the Class of 2020 senior spring athletes are.

For those student-athletes that enjoyed Tuesday’s special night with us, thanks for the memories of a proud night for the GR.

You are all winners in my book.

Here is a complete list of all the seniors that either attended or were invited to this year’s senior spring athletes parade.