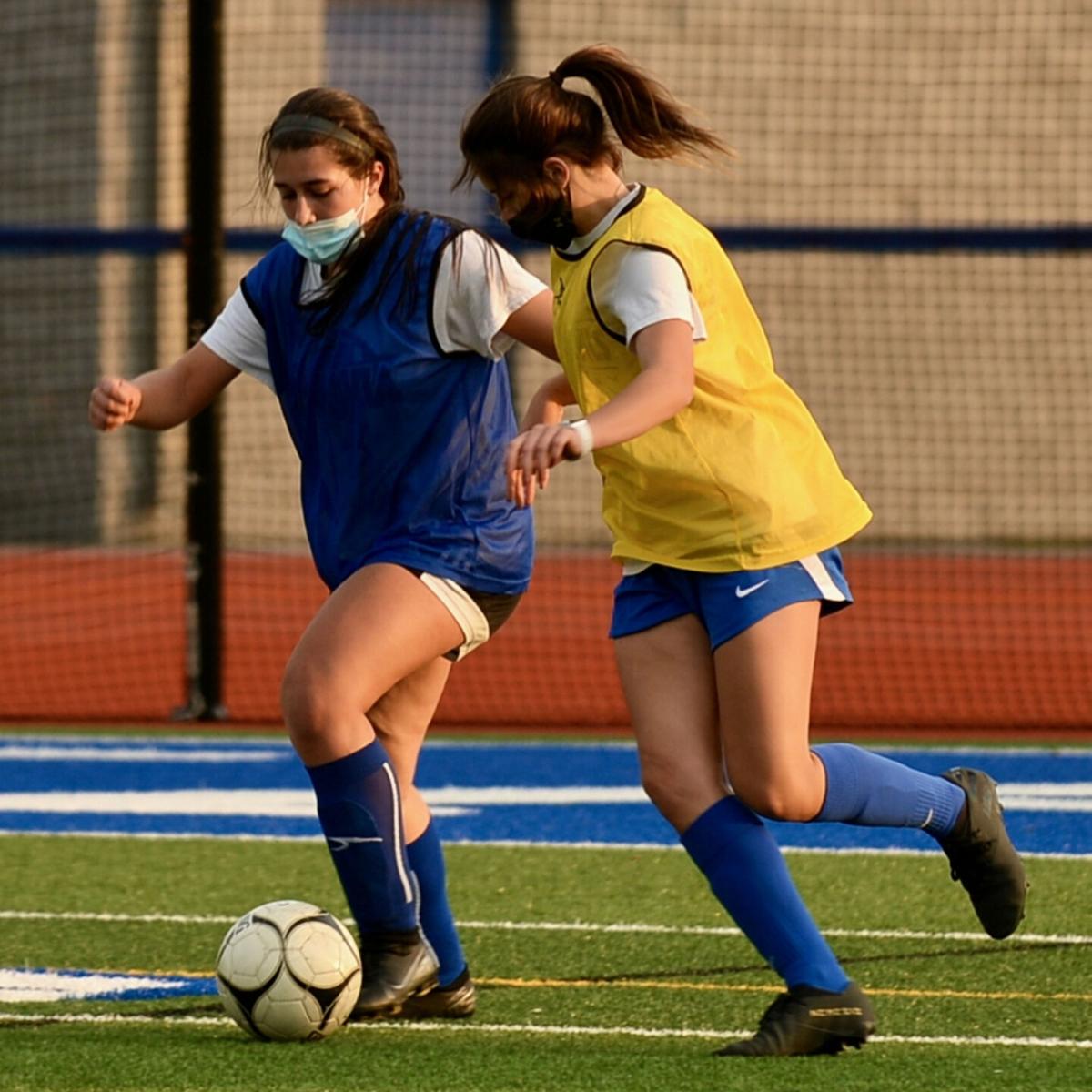 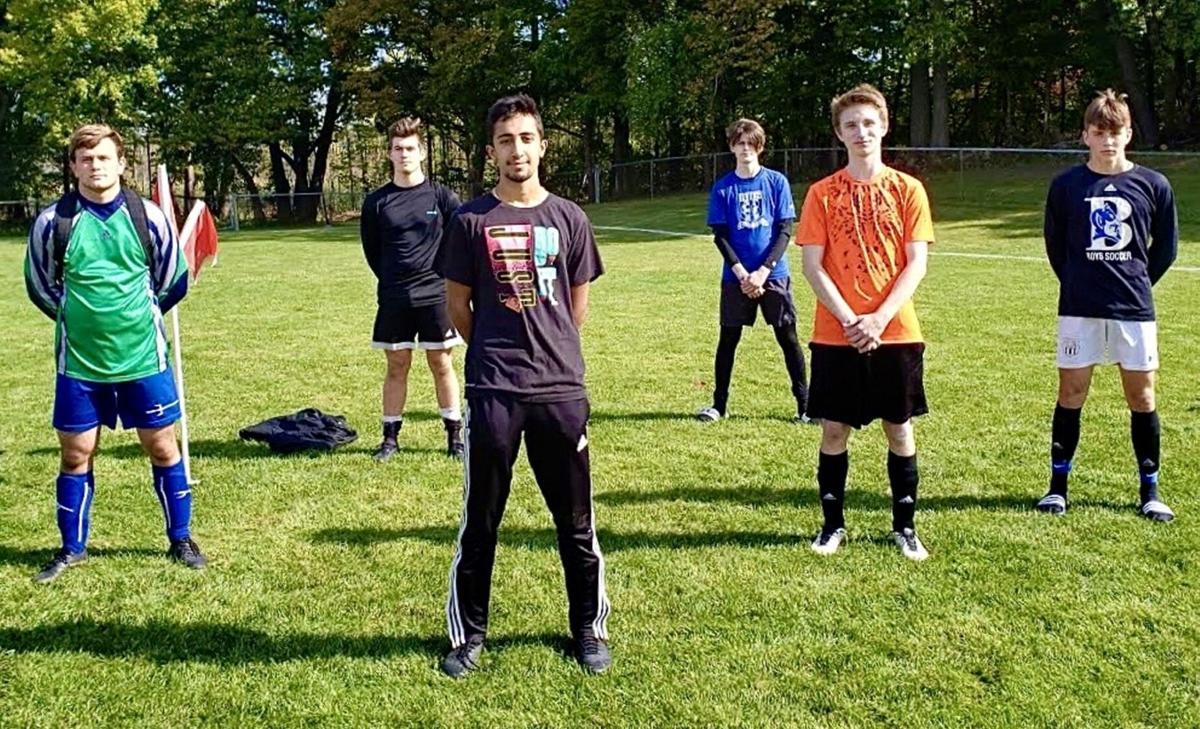 ProvidedThe Batavia boys soccer team returns a number of starters from last year’s team which was the most successful Blue Devils’ soccer team in recent memory. 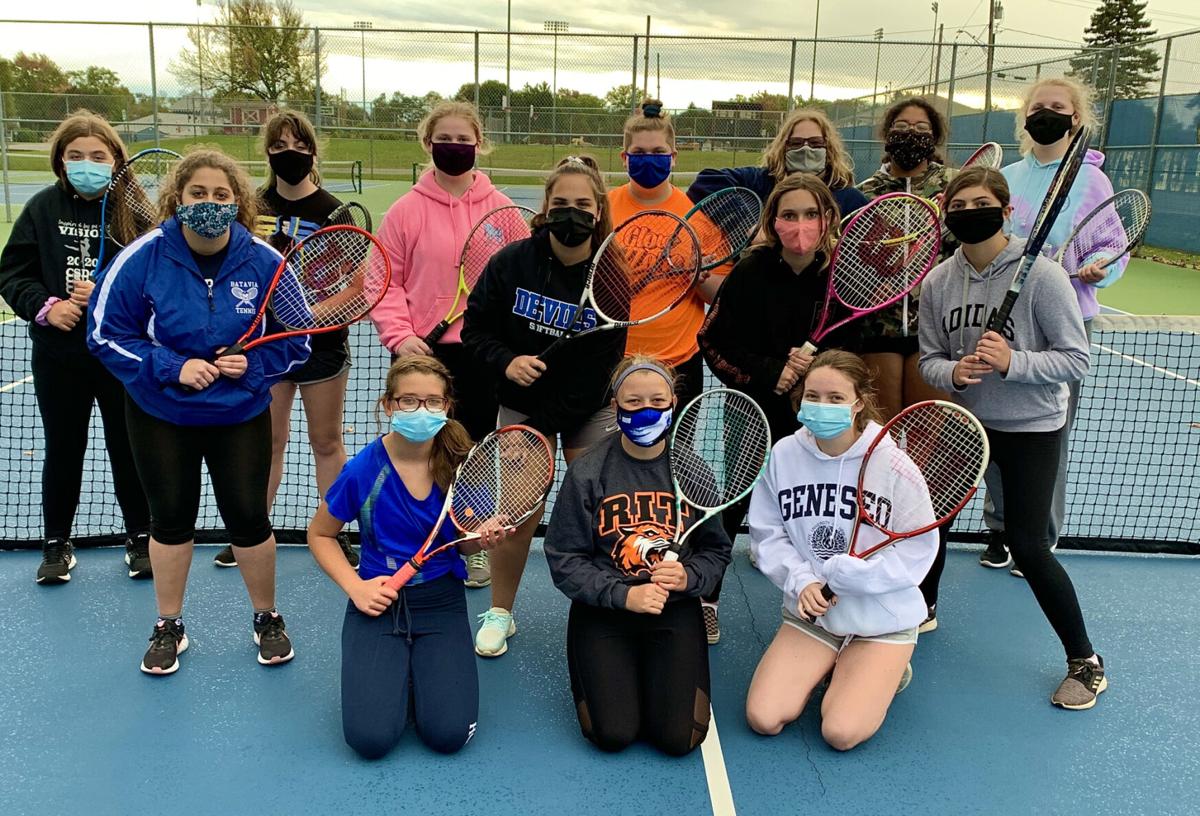 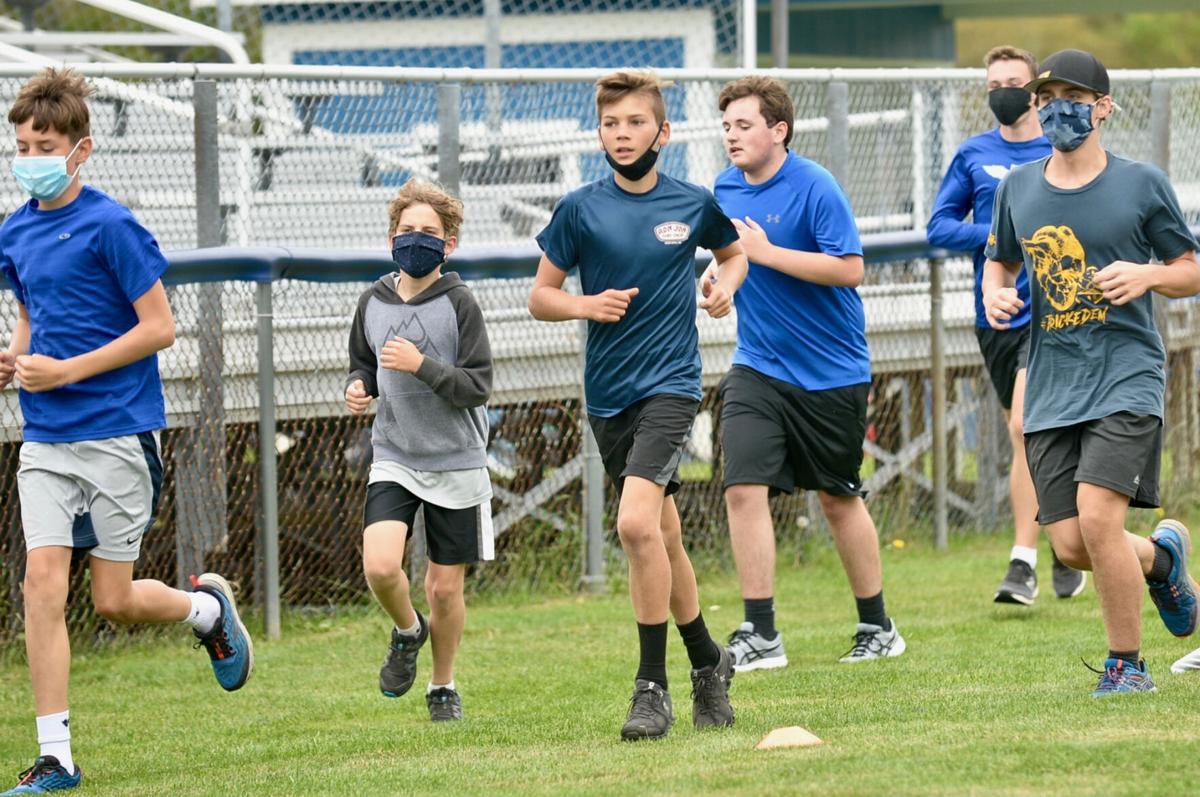 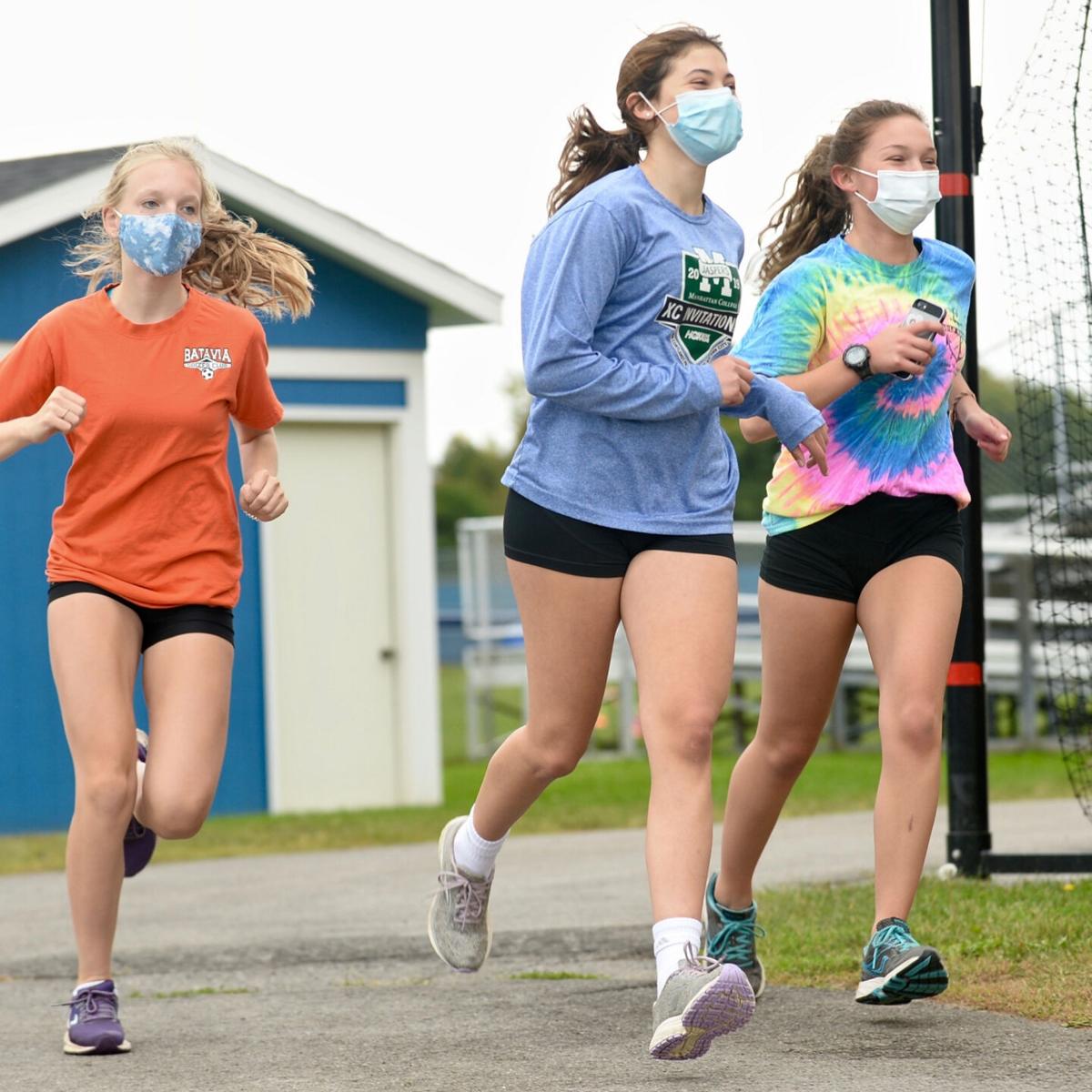 Alex Brasky/Batavia Daily NewsThe Batavia girls cross country team is looking forward to getting back on the course this fall.

ProvidedThe Batavia boys soccer team returns a number of starters from last year’s team which was the most successful Blue Devils’ soccer team in recent memory.

Alex Brasky/Batavia Daily NewsThe Batavia girls cross country team is looking forward to getting back on the course this fall.

BATAVIA — After losing several talented goal scorers due to graduation this past spring, the Batavia girls soccer team’s approach entering this season centers around teamwork. Equipped with a well-rounded roster, the Blue Devils hope to hit the ground running behind a strong group of juniors and seniors.

Senior midfielder Sophie Beckman, junior winger Olivia Halpin, junior defender Katherine Spiotta, and senior midfielder Sadie Loria are the team’s four captains and all are expected to increase their contributions from a year ago.

Beckman, a second-team Monroe County League Division IV All-Star in ‘19, says she and her teammates are beginning round themselves into game shape.

“We are really trying to lock in. We have been doing a lot of fitness stuff to get ourselves in shape, especially with the masks it’s harder to breathe,” said Beckman. “We have been working really well together and coach has been telling us to forget about all of the added challenges and to just focus on making this a great season.”

Other contributors for Batavia this season will include senior defender Piper Harloff who returns for her final season in Blue and White, while key newcomers, senior midfielder Morgan Murray and freshman winger Anna Varland expect to play essential roles for the Blue Devils as well. Another exciting player for Batavia is forward Ava Reinhart, who transferred to BHS from Notre Dame for her senior year.

In net, Batavia welcomes back senior goaltender Maddie Barone who recorded 134 saves a season ago.

The Blue Devils finished 9-7-2 in ‘19 and are hoping for increased success this season behind six returning starters.

“We’ll play a 4-3-3 formation again this year to take advantage of our speed up front and hopefully reduce our goals against by having two holding mids,” said Coach Hume. “With the loss of over 33 goals by graduating seniors, we are looking to keep the goals against low and have multiple goal scorers.”

Hume is in his 13th season as head coach of the Batavia girls soccer program.

We will continue to run a high-pressure counter-attacking offense and we have the numbers to make that work,” added Hume. “Our goal is to keep goals against at 15 or less and that should allow us a chance to win in every game.”

Be sure to catch the replay of the Blue Devils’ season opener, which was broadcast live on Friday night on the Batavia Daily News YouTube channel.

Last fall, the Batavia boys enjoyed their best season in recent memory, finishing an even 9-9, while earning their first sectional victory in quite some time. Plenty of talented contributors from last year’s team have since departed due to graduation, but Blue Devils’ head coach Brandon Every remains confident that his program remains headed in a positive direction.

Batavia returns five starters from last year’s team, including juniors Carter Havens and Collin Dunn who were steady contributors on the attack. The duo combined for seven goals and 10 assists last year as sophomores and Coach Every has seen vast improvement from each of them in the early going this year.

Two talented defenders also return for Batavia, as seniors Faraz Idres and Troy Helsdon will be expected to anchor the back end for the Blue Devils. Idres was a second-team Monroe County League Division IV All-Star in ‘19, while Helsdon lost most of his ‘19 season due to injury but returns healthy this year. Another player that missed last season due to injury, junior Nick Grover is expected to bolster what Every views as a deep Batavia front-six. Grover is capable of playing all over the field and has varsity experience despite missing last season, as he started every game of his freshman year - his first at the varsity level.

In net, Batavia hopes senior Alexander Childs can add to a solid ‘19 campaign, when Childs transitioned to goalkeeper three games into the season and went on to record six shut outs throughout the year.

“Staying healthy will be a key for us this season,” said Coach Every. “We have a strong work ethic in Batavia - the soccer culture has changed and the players have put in the work during the off season. We will be competitive this season as long as we continue to push ourselves as individuals and as a team.”

Batavia begins the season with a Saturday matchup this afternoon at Eastridge.

Jim Fazio enters his fourth year as head coach and believes this could be one of his squad’s best years since he took over the program.

“I know this group of girls will be ready to play in the always tough Monroe County League,” said Fazio. “I’m hoping to be very competitive in our division and look forward to seeing the progress our team will make as the season goes on.”

Junior Lidia Pehrson will lead the Devils from first singles, while senior Dallas Lama and junior Kylie Tatarka will be strong candidates for one of the other top singles positions.

Sophomore Maya Schrader will also be in the mix for a top singles spot, while also being considered for one of the top doubles slots. Juniors Mikalina Pellegrino-Scott, LiliAna Espinoza, and sophomore Casey Tatarka saw considerable playing time last year and should continue to push for more important roles this year.

Top newcomers for Batavia include ninth-graders Savannah Freeman and Katelyn Witherow who will make their varsity debuts this season after strong showings last year at the modified level. Eighth-grader Kelsey Kirkwood, ninth-grader Zoey Arroyo, and juniors Sophie Fulton, Ella Houseknecht, and Olivia Husser will battle for spots at singles and doubles positions. Hannah Carney, an eighth-grader looks to crack the starting lineup for the Blue Devils.

Batavia begins the season this afternoon at home vs Greece Arcadia/Olympia.

Nathan Canale returns to lead the Batavia boys, as the sophomore is coming off a sixth place finish at Class B sectionals last season and expects to be one of the top runners in Monroe County in ‘20. Batavia lost its No. 2, No. 3, and No. 4 runners from last year, but with Canale returning, along with a number of other talented runners, head coach Rich Boyce believes his team is ready to turn some heads this season.

Seniors Jonah Epps and Kam Kuszlyk have each taken on inceased roles both on the track and in terms of their leadership this season, while sophomore Cody Harloff is another of the Devils top returning runners that has put in a quality offseason of training.

“We look forward to seeing what these guys can do for us this year,” said Coach Boyce.

Junior Jack Bruggman is another runner that’s poised for a big jump in terms of his production this season.

Batavia features a number of talented newcomers as well, as freshman Orion Lama enters his first season of varsity cross country, as does eighth-grader Cooper Konieczny, who was the top runner for the Devils’ modified program last year.

“I’m just really grateful that our seniors will have a chance at a season and an opportunity to see the results of their hard work and dedication,” concluded Boyce. “Monroe County is a very competitive league for cross country. It may be frustrating for the kids, at times, to face such tough competition so regularly. But, at the end of the day, there are no surprises and there can’t be any excuses. We see, on a regular basis, the quality of programs that we aspire to be and it’s up to us to continue to work hard and close the gap.”

On the girls’ side, Batavia is coming off a 2-7 season last year, and welcomes back a young, talented core that expects to be more competitive during the ‘20 season.

Sophomore Sydney Konieczny was the team’s top-finisher at sectionals a season ago, finishing in second place in Class B, and returns this season looking to once again lead the Lady Devils. Fellow sophomore Melanie Quinones-Santiago was the third finisher for Batavia at sectionals last year and is also coming off a successful indoor track season last winter.

The Girls team definitely took a step in the right direction last year. We will bring back a good chunk of our contributors from last year and will strive to grow throughout this season. It is going to be very tough to set specific team goals as we are still in the process of figuring out what team we can be. The goals for the members of the team will be more individualized this season because of the long layoff but we will focus on getting better and having fun while doing it.

The girls’ team definitely took a step in the right direction last year,” said Batavia head coach Bill Buckenmeyer. “We bring back a good chunk of our contributors from last year and will strive to grow throughout this season.”

Buckenmeyer added that, while its hard to set specific performance goals for his team, what he’s looking for from his girls is simple.

“We are still in the process of figuring out what team we can be,” said Buckenmeyer. “Our goals will be more individualized this season because of the long layoff, but we will focus on getting better and having fun while doing it.”